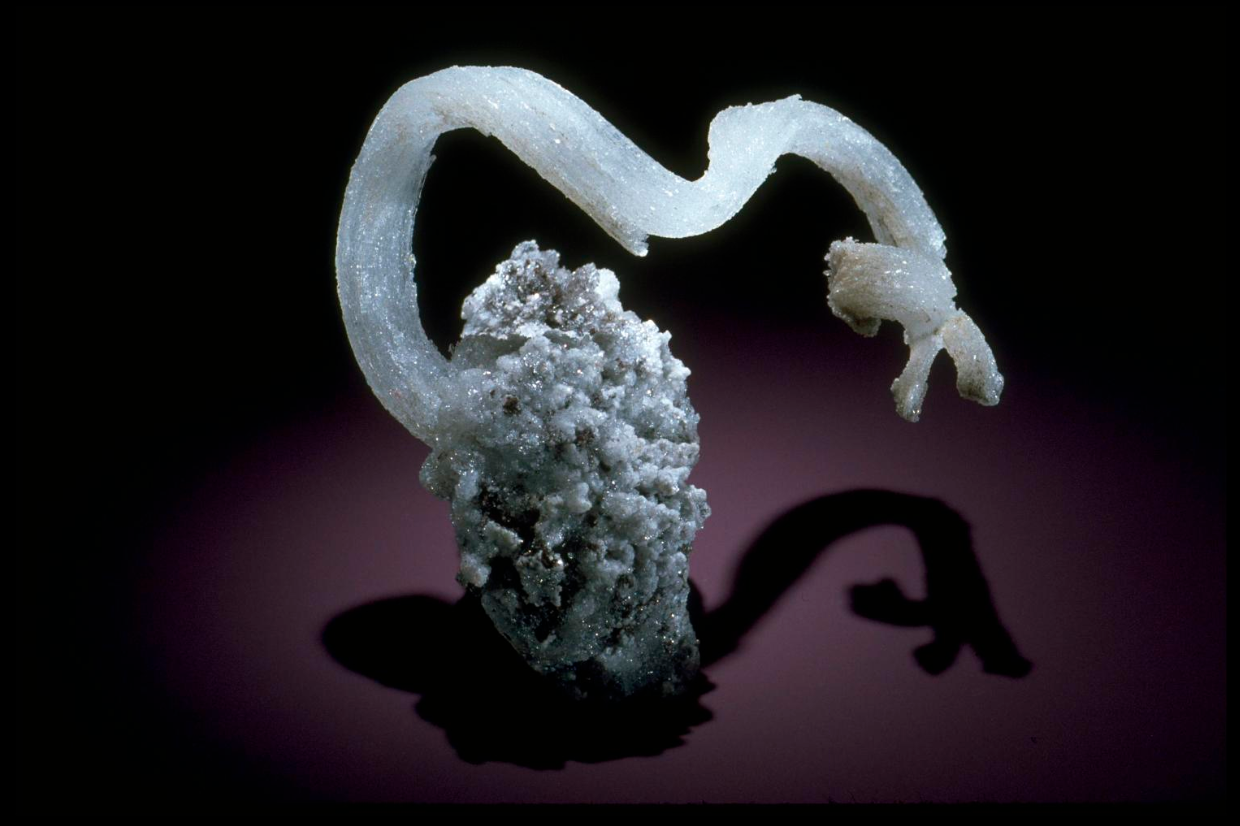 Somewhere inside the Smithsonian National Museum of Natural History, in Washington, D.C., a piece of gypsum appears to have sprouted a snake. Like many of the museum’s specimens, this mineral is bewitching and bizarre enough that some visitors can’t believe it was plucked from a cave in the Mexican state of Chihuahua. “One of the biggest misconceptions we get is that people see these beautiful specimens and think someone created it,” says Gabriela Farfan, the museum’s curator of gems and minerals.

Gypsum is a common mineral—“it’s found around the world,” Farfan says, in places that are sufficiently rich in calcium, sulfur, and water. And though it’s often enlisted for mundane work, for example in fertilizer or plaster, the mineral looks striking in its natural state. Nearly 1,000 feet underground, in a limestone cave in Naica, Mexico, gypsum grows in massive spears around 40 feet long. The subterranean landscape boasts the “Cave of Swords,” which is studded with stubby gypsum “daggers,” and the milky-white “Cave of Crystals,” which looks like the jagged, luminous Fortress of Solitude and was dubbed the “Sistine Chapel of crystals” by the researcher Juan Manuel García-Ruíz. (Farfan couldn’t say precisely which cave once harbored the sinuous specimen.)

According to the museum, this particular specimen’s appearance is a result of some crystal strands growing more quickly than others. Different crystals grow at different rates: Some materialize in hours, days, or months, and some in much, much longer. (In 2011, a team of scientists, including García-Ruíz, gauged growth rate at the Naica mine by submerging gypsum samples in water from the cave, and estimated that, at a constant temperature of about 131 degrees Fahrenheit, a spear with a three-foot diameter would have taken about a million years to grow.) As this specimen shows, the rate can vary even in a single environment, where the pressure, temperature, and ingredients are about the same.

And why the serpentine curling? Some researchers have found that when two separate minerals, with two separate structures and possibly different chemistries, grow together at the same time, they can form a layered structure that curls, Farfan says. But that isn’t necessarily what went on here. The snake-like mineral remains a bit of a mystery. “The whole field of crystal growth is a huge question in mineralogy,” she says. “It’s surprising how many questions we still have.”

How Dried Cod Became a Norwegian Staple and an Italian Delicacy

The 149-year-old specimen is one of millions at Britain's Natural History Museum.
objects of intrigue

How the once-ubiquitous convenience became a rare museum piece.
Video • Object of Intrigue