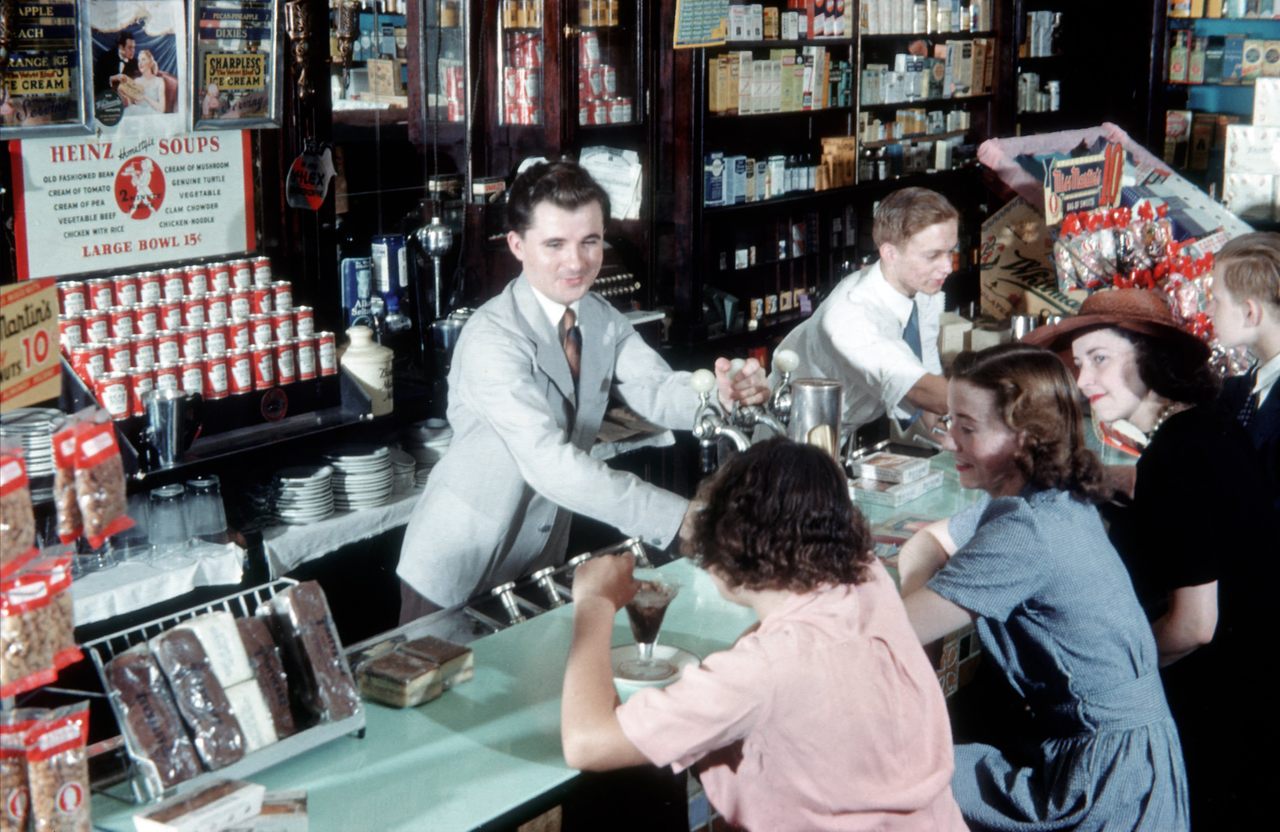 A Pharmacist works the soda fountain at the Clayton & Edward Chemists and Pharmacy in New York City, circa 1948. Ivan Dmitri/Michael Ochs Archives/Getty Images
In This Story
Destination Guide

In the classic American play Our Town, Emily Webb and George Gibbs stop at Mr. Morgan’s drug store. There, at the soda fountain that serves as the center of the social life in Grover’s Corners, New Hampshire, young love blossoms over strawberry ice-cream sodas: Emily and George realize they are “fond of” each other and always will be.

The play is set in 1901 and debuted in 1938, when soda fountains had become wildly popular. They were in drug stores and department stores, on steamships and trains. According to a 1929 issue of The New York Times, Americans were spending $700 million annually at soda fountains. Emily and George’s youthful romance was far from the only one set among ice-cream sodas. In one memorable scene from the film It’s a Wonderful Life, a young George Bailey scoops ice cream behind the counter as Mary Hatch whispers softly, “George Bailey, I’ll love you till the day I die.”

But the gargantuan soda-fountain industry had a problem: Every year, as soon as the temperature dipped, sales and profits did too. So each winter, soda fountains recommended what they called “hot sodas,” which could mean anything from hot eggnog to hot mint juleps to a “Reeking Smatch” (a blend of clam juice, cream, and ginger). Although largely forgotten, the appearance of these drinks heralded the start of a new season in the United States just as the pumpkin spice latte does today.

Not all the wintertime drinks were sodas. Some were simply familiar drinks such as coffee, tea, or hot chocolate topped with whipped cream. Soups and broths served in cups and sipped were also called hot sodas. Other drinks, such as hot angostura tonic and hot pepsin phosphate, recalled soda fountains’ medicinal roots in 19th-century drug stores. These early fountains dispensed carbonated waters and drinks including C.O. Cocktails (castor oil and soda), celery caffeine bromide, and “Moxie Nerve Food” to middle-aged men suffering from upset stomachs, nervous exhaustion, or other conditions. Similarly, Coca-Cola treated headaches and depression and Dr Pepper was sold as a “brain food and exhilarate.” Only after the replacement of old elixirs with modern medicines, and the influence of the temperance movement and Prohibition, did bicarbonate of soda and Bromo Caffeine give way to the strawberry flip, the orange fizz, the ice cream soda, and the sundae.

Hot drinks became popular almost immediately, especially with women. A New York Times column in March 1902, which referred to a drugstore fountain in the city as the “Woman’s free lunch counter,” was typical. Every day at noon, women arrived and ordered a beverage, “usually hot,” according to the article, which noted that the women were partial to hot-egg drinks. Because the hot drinks were accompanied by crackers, they were “equal to a small meal in themselves.” The drugstore, unnamed in the article but located in the heart of the shopping district, was said to be selling so many hot drinks that they needed to upgrade from a two-gallon boiler to a 40-gallon one.

Hot-egg drinks were not the only popular choice. Soda fountains sold hot ginger ale and other sodas, which didn’t come from bottles or cans, but were made in-house from the fountain’s own syrups or extracts. They simply added cold soda water for cold sodas and hot water for hot ones. The October 1918 issue of Confectioners’ Gazette included this recipe for hot ginger ale:

Popular drinks called phosphates, meanwhile, were made with “fruit acid” or “acid phosphate.” The acids added a dry, sour element, like lemon or lime juice, but without the specific taste of the fruit. They’ve become popular in cocktails today, but they were especially helpful back then since citrus fruits were less available and more expensive. A 1921 issue of The Spatula magazine ran this recipe for Hot Foam Phosphate below the heading New Hot Drinks:

The popularity of hot drinks didn’t happen on its own. Trade magazines and books not only published recipes, which they often called formulas, for everything from hot pineapple juice to hot malted orange, but they also offered promotional ideas and sales tips. An issue of The Soda Fountain, for example, suggested staging a “Hot Soda Pageant This Winter.” The editors proposed selecting different drinks each month and promoting them with window displays. One month would promote hot milk and egg drinks; another bouillons, broths, and soups; another coffee, tea, and chocolate drinks; another hot fruit drinks. During malted-milk-drinks months, they recommended a “peaceful scene with cows grazing, milkmaids, great pails of foaming milk and happy, healthy youngsters in the foreground.”

In a fall issue of The Confectioners Journal, the magazine ran a column of “Hot Soda Hints” filled with practical advice like:

“Never use silver cups for hot soda. They hold the heat and will burn the lips. China will not.”

“Never serve a straw with a hot drink.”

“Always serve a drink too hot… if you serve [a customer] a luke-warm drink he will never come back again.”

“Use whipped cream on every possible hot drink. It costs but little and makes it classy.”

“Serve sweet crackers with sweet drinks like chocolate and coffee; saltines with the bouillons. They match better that way.”

“Have sugar, pepper, salt, celery salt, grated nutmeg, and Worcester sauce handy so a customer may season his drink to suit his taste.”

“Introduce some novelty at your hot soda counter every week. It keeps interest awake—yours and the customer’s.”

The Confectioners Journal’s prediction came true. Serving hot sodas and crackers led naturally to the addition of sandwiches and soups, especially when Prohibition ended the barroom tradition of a free lunch with a drink. Before long, for both men and women, having lunch at the soda fountain was as natural as having a soda.

In a 1930 New York Times article titled “The Human Filling Station,” Eunice Fuller Barnard wrote, “Three meals a day, once a function of hearth and home, and lately of kitchenette and restaurant, are passing before our unconsidering gaze to the nickeled and marbled purlieus of the soda fountain. Where a decade ago it purveyed a few timid crackers along with the hot chocolate, today there is little from chowder to pie, or from waffles to chop suey, that is not at one time or another in its enterprising repertoire.” She attributed this to Prohibition, the speed of modern life, convenience, and affordability. She failed to mention the lengths the fountain business went in order to make sure their industry grew and succeeded, in hot weather and cold.

Today, nearly all of the drug-store soda fountains have been replaced by fast-food chains, and hot ginger ale isn’t on menus. But there’s no reason we can’t follow one of these recipes and enjoy our own hot sodas.

This sweet, creamy enigma dates back to the late 1800s.
nature

Russia's Patriotic Alternative to Coca-Cola Is Made Out of Bread

For centuries, Russians have celebrated their Slavic roots with kvass.
food

Around January 25, winter-bound villages in Iceland celebrate the return of the sunlight.
Video • Wonder From Home