At This Armenian Restaurant, the Ovens Are Satellite Dishes - Gastro Obscura
Want to see fewer ads? Become a Member. 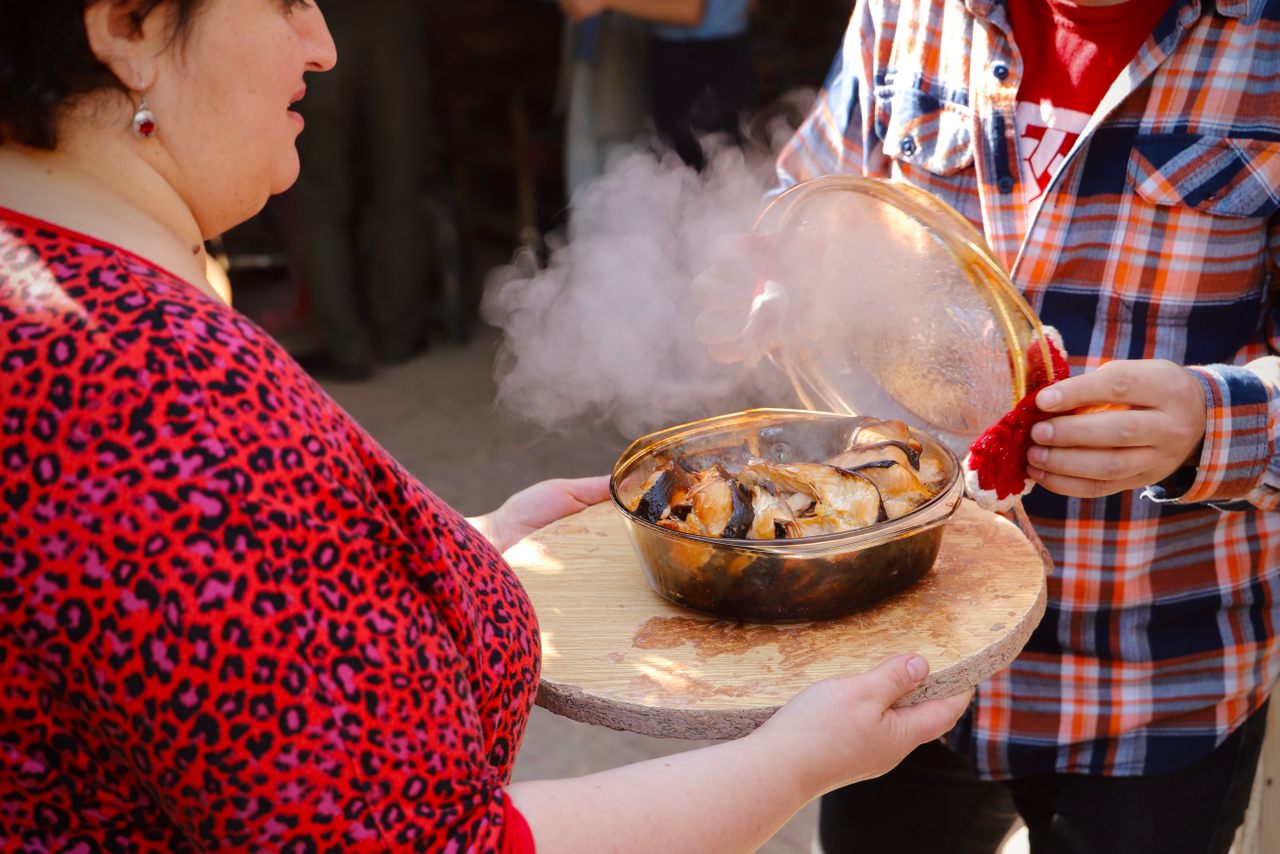 At this desert restaurant, meals are cooked in solar ovens.
Destination Guide

The menu of the cheerful restaurant located inside the Machanents Center lists samples of Armenian cuisine: nettle soup, ailazan (a vegetable dish that they serve fried with Ararat brandy), Marash (lentils, chicken, onions, and lavash).

But it’s the Sunny Meals section that has become a hit with diners. After they choose from options such as beef, chicken, eggplants, or trout—which comes from the famous Lake Sevan—the order goes to the kitchen. But the chefs don’t fire up a stove or heat an oven. Instead, they head to the satellite dishes in the backyard, where each dish will be cooked by sunlight.

The Machanents cultural center is in Yerevan, the capital of Armenia. Its mission is to help young people in situations of social vulnerability; it’s the staffs’ and youths’ interest in creativity, the arts, and innovation that brought the satellite dishes to the backyard. Of varying diameters, they’re covered by hundreds of small rectangle mirrors.

When customers order one of the “sunny meals,” the cooks use a pan made of glass (to allow the sunlight to pass through) and place walnuts on the bottom and, on top, the meat or vegetables.

Instead of going to the oven, they fit the pan into a cradle held by two rotating metal arms connected to the center of the satellite dish. They adjust the angle to point the pan at the sun, and they wait. In minutes, the food is ready. On mild sunny days, it cooks in 20 minutes or less. During the hot Armenian summer, the temperature in the pan can reach up to 700º Celsius, so the preparation time ranges from three minutes to less than seven. (But there’s no cooking with the satellites on cloudy days.)

Armenian scientists Gregor Mnatsakanyan and Vahan Hamazaspyan originally created the satellite dishes with dreams of distributing them around the country. Hamazaspyan, a pioneer in the study of solar energy use, began developing the first prototypes in the 1980s, after the devastating Spitak earthquake. Satellite solar ovens, he hoped, would feed his countrymen affordably during hard times.

Hamazaspyan resumed his project in the following decade, amidst conflicts in the disputed region of Nagorno-Karabakh and surrounding territories. Both Armenia and Azerbaijan claim the border region, but due to the failure of mediation efforts, the region continues to see increased militarization and frequent cease-fire violations.

The conflict led to an economic blockade: Turkey closed its eastern border with Armenia, and on the other side of the country, Azerbaijan closed its border, imposing restrictions and blocking Russian gas pipelines. This spurred a severe crisis of supplies and, of course, energy.

Despite the shortages, Hamazaspyan failed to win government support for distributing the satellite dishes. “From the elderly to children, it can be adjusted for a variety of uses and is very easy to handle,” he says. It’s both simple and affordable, he adds. Still, the government would need to invest in mass production to bring down the price tag from its current $200-600, and convince families to adapt to an oven that doesn’t work at nights or during cloudy days.

That’s how the three satellite dishes arrived at the Machanents Center. The founder, Grigor Babakhanyan, thought it would highlight the work of the Armenian scientists and give the project a chance. And Armenia is known for its 2,700 sun hours of light a year.

The trout I ordered during my visit to Macchanents came to the table perfectly cooked: tender and juicy. “We have to make sure it’s as fresh as possible, from the catch of the day, so we can get all this juiciness,” Muradyan adds. She says that they once did a blind test with some customers. They cooked the same cut of beef in a gas oven and in the satellites. “Everyone preferred the second version,” she says. The layer of walnuts, restaurant cooks explain, add smoky notes to the food while also filtering the sun’s rays to aid in even cooking.

Using the sun for cooking is not unprecedented. Similar projects can be found from Nepal to Africa. In the Chilean village of Villaseca, the restaurant Entre Cordillera Restobar Solar serves its dishes using only the sun’s rays (no gas, electricity, or firewood). Their transparent boxes heat food like the inside of parked cars on hot days. In Oaxaca, Mexico, engineer Gregor Schäpersis is experimenting with solar cooking using solar reflectors in mezcal distilleries and tortilla bakeries.

But Hamazaspyan says it is solar cooking at home that could make a real difference in people’s lives. “Most governments around the world show little interest in using these clean and sustainable technologies and free energy properly,” he says with frustration.

It means that projects like his have to be done as small initiatives, such as in the Machanents Center, and nonprofits try to distribute or fund solar ovens to poor families in developing countries, especially in poorly ventilated homes where cooking fires cause illness and poor health.

“The ultimate aim should be focused on helping people eat better, not just on companies and business,” he adds. The technology, Hamazaspyan says, is easy, safe, and affordable. And, after all, the sun shines for everyone.

This old technology is more important than ever.
restaurants

Researching traditional foods led them to the revelations of an archaeological dig in Kentucky.
restaurants