Where in the World Are Santa Claus's Bones? - Atlas Obscura
Want to see fewer ads? Become a Member. 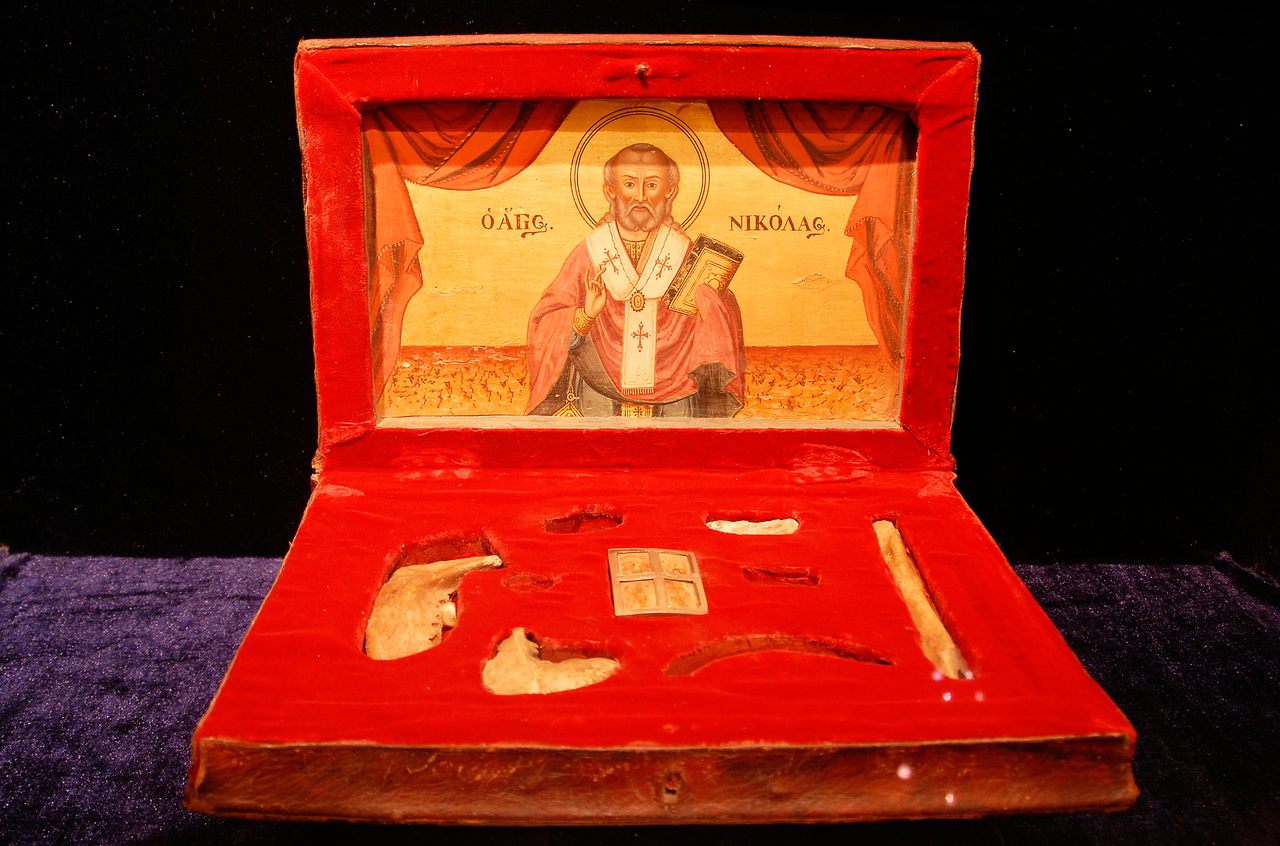 Santa Claus’s bones are in Bari, Italy. They are also in Venice. And France, Germany, and Annandale, Virginia. A finger bone of his is in Quebec and a piece of pelvic bone resides in Morton Grove, Illinois. Sure, the modern-day vision of a jolly fat man in a red suit is nothing more than a fairytale, but many believe the inspiration for Santa Claus—a 4th-century bishop named Saint Nicholas—was as real as reindeer. And fragments of him are thought to be scattered across the globe.

In Catholicism, relics are a big deal. From the Latin word reliquiae meaning “remains,” relics are preserved tangible pieces of heaven-bound venerated individuals, i.e. saints, that Catholics still on Earth can worship. Relics are divided into three classes. Third-class relics are items that have touched other relics. Second-class are items that were once owned, valued, or worn by a Saint. First-class relics are flesh and bone.

Over the more than 2,000 years since the birth of Jesus, first-class relics have become a fundamental part of Catholicism. Pieces of saints are not only tangible, but transportable—small bones and fragments can easily be moved from one place to another. While the wealthy were able to afford coming a long way to see a full skeleton of a venerated saint, the poor could not. “Since the people [couldn’t] come to the martyrs, relics went to the people,” says Father Dennis O’Neill of St. Martha Church in Morton Grove, Illinois and possessor of a first-class relic himself, a pubic bone of St. Nicholas. This is why first-class relics can be found everywhere. And there are few saints more popular than the ancient Greek bishop who lived in a Byzantine town in southwest Turkey.

It’s believed that the man who would become Saint Nicholas was born around 280* in Myra, near the ancient city of Patara on the southwestern coast of modern-day Turkey. At the time, the region was under Byzantine control, though Nicholas’s family was Greek. While he was young, his parents died in a malaria epidemic and left him with a substantial inheritance. However, instead of spending it on himself, Nicholas gave it all away to the poor.

One story, in particular, highlights his kindness. While traveling, Nicholas encountered three poor sisters whose father was unable to pay their dowries (gift or payment given for the right to marry) and had decided to sell all three into prostitution. To save them, Nicholas tossed gold coins through the father’s window under the darkness of night. When it was discovered he had provided the dowries, Nicholas begged the family not to tell anyone.

Other tales—like bringing back to life the dismembered remains of three boys stashed in pickling barrels by a murderous butcher (it’s a weird one)—only furthered the bishop’s reputation and, upon his death on December 6th, 343, he was recognized as a saint. His remains were enshrined in what became known as The Church of St. Nicholas in Myra, which is today the town of Demre in the Antalya Province of Turkey. And that’s where it’s believed his bones stayed for over half a millennium.

Over the centuries, St. Nicholas’s tomb became a popular pilgrimage site, especially due to the sweet-smelling, water-like substance with supposed magical healing powers known as “manna” oozing from the tomb. However, in 1087, the tomb was raided by Italian sailors who threw the bones of the saint on a ship bound for Bari, Italy. According to Strange Remains, there are two possible reasons for this. One is that they were attempting to save the saint from the tomb’s certain destruction at the hands of the invading Muslim Seljuk Turks. The other is that they simply saw dollar signs, knowing that the relics would be a tourist attraction for generations to come.

Whatever the reason was, the sailors hurriedly collected the St. Nicholas relics and deposited them at the Basilica of St. Nicholas in Bari. Twelve years later, Christian crusaders came back to gather the remaining 500 or so fragments that had been left behind and took those to Venice. And so, for the last millennium, even with bone fragments being dispersed around the world, Bari and Venice have remained the largest keeper of St. Nicholas first-class relics. Or so it’s thought.

In October 2017, Turkish archaeologists announced that using ground penetrating radar they uncovered a previously unknown, undamaged cavity underneath the Church of St. Nicholas in Demre. This lead to speculation that this could be a location for an ancient tomb. Turkish government officials took it two steps further by saying that this tomb belonged to St. Nicholas and his bones are, in fact, still there. However, this declaration seems rather premature, even according to the project’s head of excavations, Professor Sema Doğan. She told Atlas Obscura via email that an educated guess is that these cavities under the church belong to a previously undiscovered structure, but it’s just as likely to be Roman temple as one from St. Nicholas’s time.

Professor Doğan has been doing excavation and conservation work at the church since 1990 and says that, at least according to her work, “it is too early to say that this potential finding could be a tomb…[or] to comment that St. Nicholas could still be entombed there....I think more work is needed for now.” But she did cast doubt, like her colleagues, on the fact that St. Nicholas’s bones are in Bari and Venice, saying that those remains could belong to a different, unidentified priest.

The next step for the project is to locate the places in the Church that do not have a floor (in order to avoid damaging the 1200-year-old opus sectile mosaics that line the majority of the grounds), dig, and scale down to the cavity to see what lies beneath. In October, Antalya’s Director of Surveying and Monuments Cemil Karabayram told the Turkish newspaper Hurriyet Daily News that he knows the world is watching while also alluding to perhaps the real motive, “If we get the results, Antalya’s tourism will gain big momentum.”

This theory that the bones in Bari and Venice do not belong to St. Nicholas highlights the skepticism around the authenticity of first-class relics in general. Earlier this month, with online platforms becoming a growing marketplace for the sales of relics, the Vatican published updated rules for authenticating and conserving the flesh and bone of saints. In 2015, Rick Paulus wrote for Vice about his descent into the fraudulent world of Catholic relics. This has lead many in possession of supposed first-class relics to find to better ways to verify what they actually have, including Father O’Neill of St. Martha in Illinois.

About a decade ago, Father O’Neill came into possession of what is believed to be a fragment of St. Nicholas’s pubic bone. He told Atlas Obscura that he obtained it, along with many other relics, from a Belgian entrepreneur, who was sworn to secrecy about the exact origin of the bone. Father O’Neill believes the bone was hidden during the French Revolution to protect it from being desecrated. It then made its way to the since-closed Poor Clare Sisters Convent of St. Claire in Lyon, France, then to this Belgian man, and, finally, onto this suburban church outside of Chicago. It’s believed to be the largest piece of St. Nick in the United States and the relic is available to the public for veneration, along with 1,800 others in the church’s shrine.

Until recently, Father O’Neill’s only solid proof that the relic was once inside the saint was the word “St. Nichola” taped right to the bone. “It’s something that just came to me as a loose bone with just a name on it,” says Father O’Neill, “it’s not a guarantee that it’s originally from St. Nicholas.” But in November 2016, he was contacted by Professor Tom Higham (University of Oxford) and Dr. Georges Kazan (University of Turku TIAS) who are leading experts in their fields; Higham in scientific dating and Kazan in the archaeology of Christian relics. Together, they are directors of the Oxford Relics Cluster at Keble College’s Advanced Studies Centre, the world’s only research center for the history, science, and theology of relics. They were interested in taking a sample of this bone for radiocarbon dating. Since the method was devised in 1946, the process of radiocarbon dating has not only improved but has become much less invasive. “In the past, you needed a good chunk of bone, maybe a centimeter or two,” Dr. Kazan says. “Now, it’s just .3 grams or so, just a little salt-size pinch.”

Earlier this year, the findings came back and gave credence to the existence of Santa Claus in Morton Grove. According to the results of the radiocarbon dating, the bone dates back to the 4th century which puts it directly in line with the year (346) that many believe St. Nicholas died. Not only has this confirmation made Father O’Neil much more confident that what he has is a piece of St. Nick but it allows the science to progress forward. “[We] can now do a DNA comparison to the bones in Bari and Venice to see if these bones are from the same individual,” says Dr. Kazan. “If we found this Chicago bone is the same person as the one in Bari, then [we] got at least a documented tradition that all of it came from [Myra].”

Much like in Turkey, considerable work—like DNA testing and isotope analysis—still needs to be done in order to prove that the pelvic bone in Illinois, the piece of bone in Northridge, California, and the fragments in Bari and Venice were all, in fact, once part of St. Nick, a.k.a. Santa Claus. However, based on scientific evidence and Christian tradition, it’s certainly possible that pieces of St. Nick are everywhere. But, much like the existence of Santa Claus, the question of if these scattered bones really did once belong to St. Nick may never be able to be proven. As Dr. Kazan puts it, “at the end of the day, it’s a matter of faith.”

Correction: The original version of this story said St. Nicholas was born in 280 BC. We were off by a few centuries.

How the traveling body parts of saints get through customs.
victorian

Do not try them at home.
relics

Elizabeth of Aragon's incorrupt appendage is temporarily on view in Portugal.
food