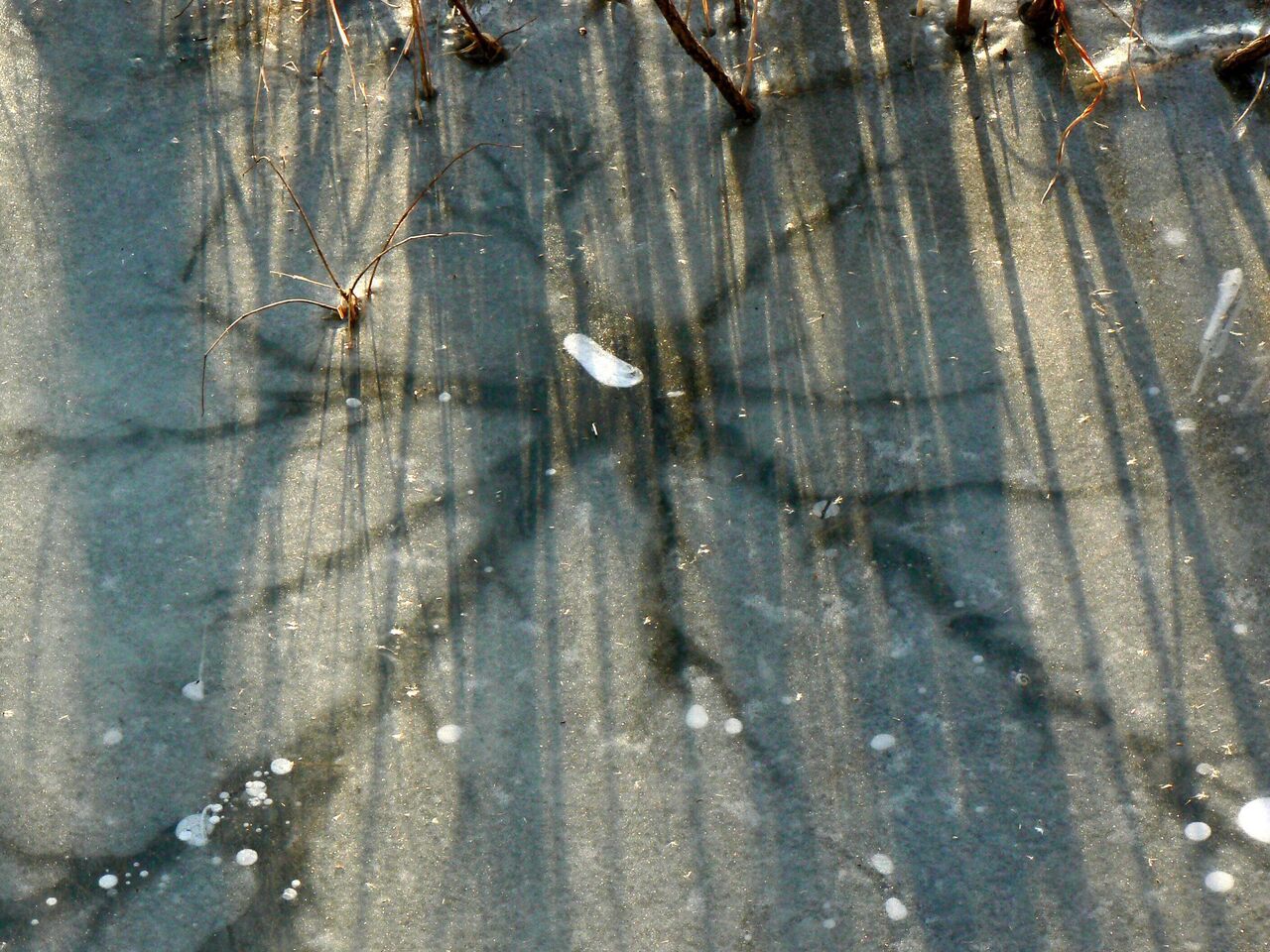 They're beguiling and still a bit mysterious. Benny Mazur/CC by 2.0
In This Story
Destination Guide

On certain days during Boston’s long winter, residents can glimpse the stars by looking down. On the dove-colored surfaces of frozen ponds or lakes, shapes appear, rounded in the center with spiky arms stretching outward. The water, a scramble of gray and white, seems to mirror a star-pricked sky. Instead of appearing brighter than their surroundings, as their spacefaring counterparts do, these shapes are darker, showcasing the deep blue below.

The moody wells and meandering branches might evoke a tie-dyed shirt or a squashed spider, legs akimbo. (Or, if your mind’s eye gazes inward, maybe the forking dendrites of a nerve.) Scientists have dubbed these shapes “lake stars,” and they speckle frozen water from Boston to Boulder, Chicago to Sweden.

The celestial cast we meet on cloudless nights begins in dust. Those stars grow under immense pressure, in hot, collapsing clouds. Lake stars also grow under particular conditions: Temperature and precipitation have to be right.

Lake stars are born when warm water wells up from beneath a thin layer of ice, covered with a just-thick-enough coating of snow and slush. It’s a meteorological Goldilocks situation. “If the initial ice is not thin enough, the warm water from below has difficulty seeping through. If the snow layer is not thick enough, then the water seepage doesn’t occur,” says Victor Tsai, a geophysicist at Brown University and coauthor, with Yale physicist John Wettlaufer, of a 2007 paper conveniently titled “Star patterns on lake ice.”

The perfect lake star porridge is a short-but-mighty cold snap that freezes ice an inch or two thick, followed by warmer days that bump the ice temperature above 32 degrees Fahrenheit, “allowing it to become leaky,” National Center for Atmospheric Research scientist Charles Knight wrote in a 1999 edition of the magazine Weatherwise. “Finally,” Knight continued, “in this ideal scenario, a cold front goes by, dropping several inches of snow.”

The initial central hole could be formed by any number of things—a rock or branch splashing into the water, for instance, or the antics of an animal. Some appear at regular intervals. In the 1980s, other researchers, including Kristina Katsaros, then an atmospheric scientist at the University of Washington, speculated that the stars were a product of convection in the water, in which temperature differences cause water layers to shift, with warm water gathering near the surface and cool, dense water descending. Tsai and Wettlaufer didn’t dive into the origin of the circles in their 2007 paper, but they laid out a mathematical model to describe the formation of the reaching arms.

Tsai and Wettlaufer then took their model for a spin in the lab, by dribbling water with a temperature of 1 degree Celsius (just above freezing) though a thin layer of slush spread atop a circular plate held just below freezing. They found that the number of tendrils reaching out from the center was typically between five and eight (but out in the wild, slushy yonder, results may vary).

Studded with pockets of air, snow has pores through which water can wander. “If one location has a little bit more water flow than another, it tends to melt faster,” Tsai says. “This is the fundamental reason why the fingers form.” The reason that the spots don’t sprout zillions of fingers is that “heat likes to distribute itself evenly in space,” Tsai adds. “If one region is a little warmer than another, over time the temperatures tend to even out.” The flow promotes the fingers fanning out from the center, and the heat distribution curtails the zigs and zags.

Wettlaufer says that, more than a decade after their paper came out, hole formation remains a little murky. Getting clarity on those mechanics might require a scalable lab experiment, he says. “Or someone really needs to set up an array of cameras or fly a drone systematically over an actual lake.” Meanwhile, as scientists continue to probe the celestial realm and rove alien worlds, lake stars remain one of winter’s loveliest mysteries here at home.

“It sounds like if you got a big Slurpee, and then dumped it on the ground.”
lakes

“This is an impressive display of the power of wind and water!”
nature

A ranger initially mistook the clumps for wads of wet toilet paper.
volcanoes

At the time, unrest roiled Egypt and an empire rose in Rome.
Video • PinDrop

Wind and waves sprayed freezing water from Lake Erie onto the houses of Hoover Beach.
Read more
Thanks for sharing!