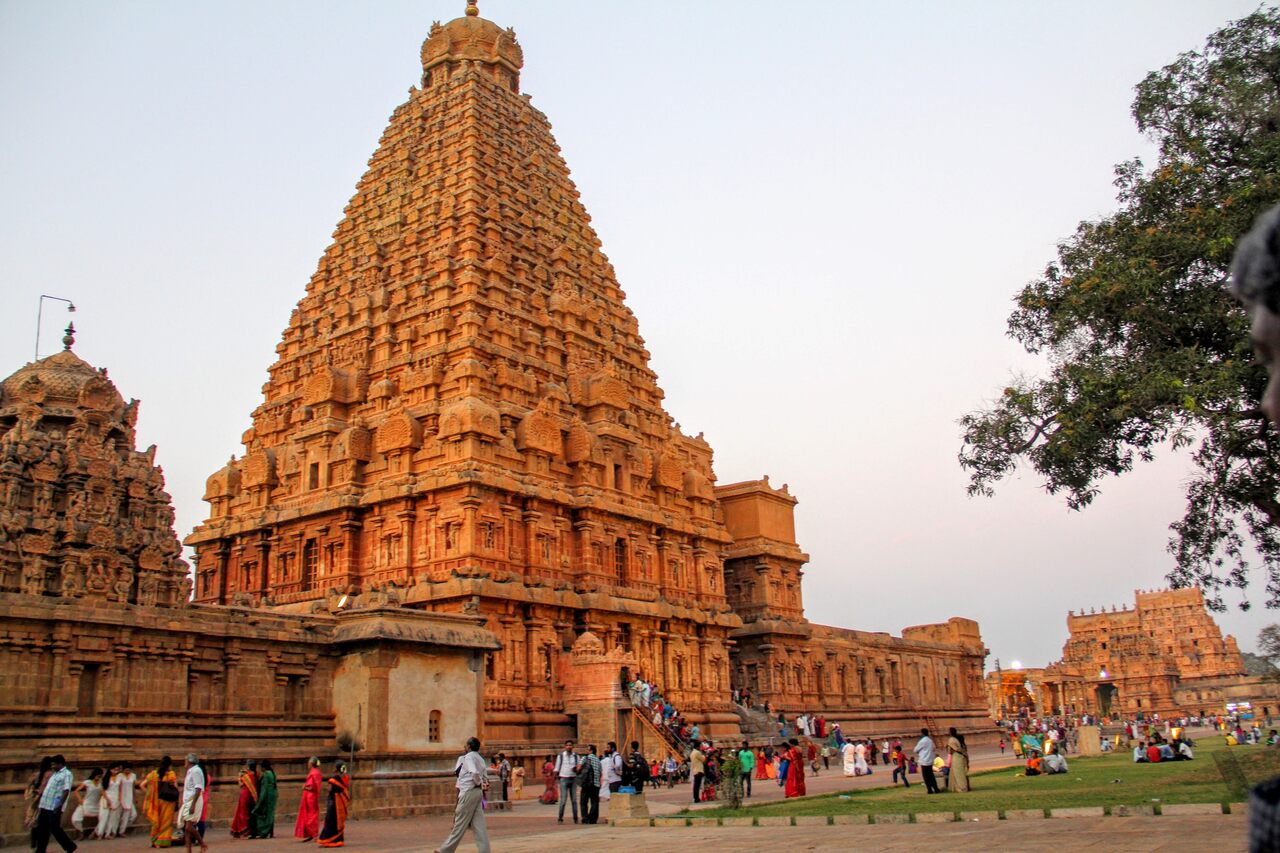 Brihadisvara Temple, sometimes called the Big Temple, is in South India and dates back to the 11th century. Kalpana Sunder
In This Story
Place

A towering work of stone and philosophy that was constructed using ancient Hindu science.
Destination Guide

Amid a clang and clamor of activity, Vaidyanatha Selvanathan Sthapati sits on the floor of his family pattarai, or workshop, in Chennai. All around him, men in dhotis and vests are engrossed in cutting, sculpting, and finishing gray granite. They chip and chisel and hammer away, slowly bringing to life an intricately carved pillar destined to adorn a Hindu temple.

The scene is familiar to Selvanathan, 57. He says he grew up in the pattarai of his uncle, who taught him to be curious and observant, as nature was the inspiration for art and the work their family did. Before his death in 2011, Selvanathan’s uncle, Vaidyanatha Ganapathi Sthapati, was a prominent temple architect. Today, it is Selvanathan who supervises the work, and maintains a family tradition that has lasted a millennium: He is the descendant of Kunjaramallan Rajaraja Perunthachchan, the 11th century master builder, or sthapati, whose work includes the UNESCO-listed Brihadisvara, or Big Temple, in Thanjavur, South India. Selvanathan represents the 38th generation in this unbroken line of sthapati. His work now, in the 21st century, is as much about restoring and preserving the past as it is about designing new temples.

As a young boy, Selvanathan would sit beside his uncle and watch with fascination as stone and wood were transformed from raw materials into art. He says he would often pick up a small piece and carve it, or draw what he saw. He eventually attended a college of temple architecture started by his grandfather, and spent seven years learning everything from drawing and engineering to carving and sculpting. Then he went to work for his uncle, whose ambitious projects included the 133-foot statue of Thiruvallavur, a Tamil poet, dramatically rising from a small island at the southern tip of India.

For millennia, Hindu temples have been built by teams of sthapatis and shilpis, or sculptors, organized into guilds, with skills traditionally handed down from father to son. The entire process of temple design and construction—and renovation—is dictated by ancient principles of design rooted in Vedic traditions, most prominently Vastu Shastra, which govern the location, orientation, and layout of a building. Much of the practical knowledge is now passed from one generation to the next via oral tradition. The original texts, says Selvanathan, “had evolved over thousands of years. Many have survived, though some were lost in the ravages of time.”

These ancient traditions establish the sthapati as much more than a builder. Temple architect and author Sashikala Ananth, who has researched Vastu Shastra for more than 30 years, says, “A sthapati was a multi-faceted person, who would in ancient times design everything, from temple (cisterns) and chariots to statues and sculptures, and be in charge of town planning. He was a scholar who had mastered ancient texts, had an aesthetic appreciation of music, poetry, dance, and symbolism, and had to train those who worked below him.”

Ananth adds that much of the sthapati’s skill set revolves around an understanding of nature and both its resources and challenges. The master builders might use plant extracts to create a natural mortar between layers of rock, or adjust designs based on locations. In Kerala, for example, on India’s southwest coast, roofs made of baked clay tiles or copper sheets slope at an angle that allows for drainage when the heavy monsoon rains sweep in. “The sthapatis build resilient structures which stand the test of time,” says Ananth.

Restoration is also a key part of the sthapati legacy Selvanathan carries on. Every 12 years, communities traditionally reconsecrate temples, which includes performing needed repairs and renovation. As with new construction, the renovation process requires adherence to Vastu Shastra principles, says Selvanathan. “Temples or homes are not just bricks or stones. They are energy fields, living organisms with vibrations,” he says. “The physical form of the temple is conceived as the physical form of god.” Temple elements such as the central tower, entrance tower, and inner sanctum are as integral to the building and its symbolism as an individual’s foot, leg, head, or other body parts, says the sthapati. One of his current projects is the restoration of the Thiruketheeswaram Shiva temple in Mannar, Sri Lanka, which his grandfather worked on 60 years ago.

Selvanathan and his team have built or restored temples in England, Singapore, Malaysia, Fiji, Canada, and the United States, including the construction of the Iraivan Temple on Kauai, Hawaii. For that project, hundreds of slabs of white granite, some as heavy as 4,000 pounds, were shipped across the ocean from where they were quarried and carved by hand in South India. The entire temple was assembled without machine tools, according to Selvanathan.

“Building a temple is like solving a gigantic 3D jigsaw puzzle,” says Selvanathan. “The various elements and parts of temples have to be interlocked to be held in position, keeping in mind that stones may expand or contract according to weather conditions.”

Following the Vastu Shastra and related ancient systems, sthapatis use organic materials such as marble, granite, and wood in temple construction and restoration; they believe the materials conduct harmonious cosmic energies. Different end uses require different qualities in raw materials, says Chithra Madhavan, an independent temple architecture historian*. For example, she says a sthapati must be able to identify properties in raw stone that can be transformed into a feature common in ancient South Indian temples: musical pillars that resonate at specific pitches when brushed or tapped. The skill of selecting stone and carving it with hand tools to create the pillars goes back centuries. So too does the art of planning temple acoustics ahead of construction to eliminate echoes in often cavernous rooms. Says Madhavan: “The precise measurements and scale of our ancient temples are just mind-blowing.”

Selvanathan and other sthapatis continue to use the simple tools of their predecessors, such as wooden hammers and thread dipped in a red oxide dye to measure dimensions, also laid out by the Vastu Shastra. “Every structure we build has a grammar. If we don’t adhere to those rules based on ancient wisdom, we will not be healthy people,” says Ponni Selvanathan, the sthapati’s wife and also a member of the family business.

Whether that business continues, welcoming a 39th generation into the trade, remains to be seen, says Selvanathan with a knowing smile. His older son, he says, has recently shown interest. “He’s learning the ropes. Only time will tell.”

*Correction: This article previously stated that Chithra Madhavan was affiliated with Krea University. She is an independent historian.

The complex ceremonies continue, but likely without hundreds of thousands of devotees.
temples

Podcast: Seashell Shrines and Bones With the Places Team

Research reveals the lush islets have been a setting for royal relaxation, political negotiations, and ritual fattening.
architecture

The site reflects how the rise of Christianity to the south affected the worship of the Norse pantheon.
List

1:26
Want to see fewer ads? Become a Member.
From Around the Web
Atlas Obscura Trips
India: Desert Festivals of Rajasthan
View This Trip
Thanks for sharing!