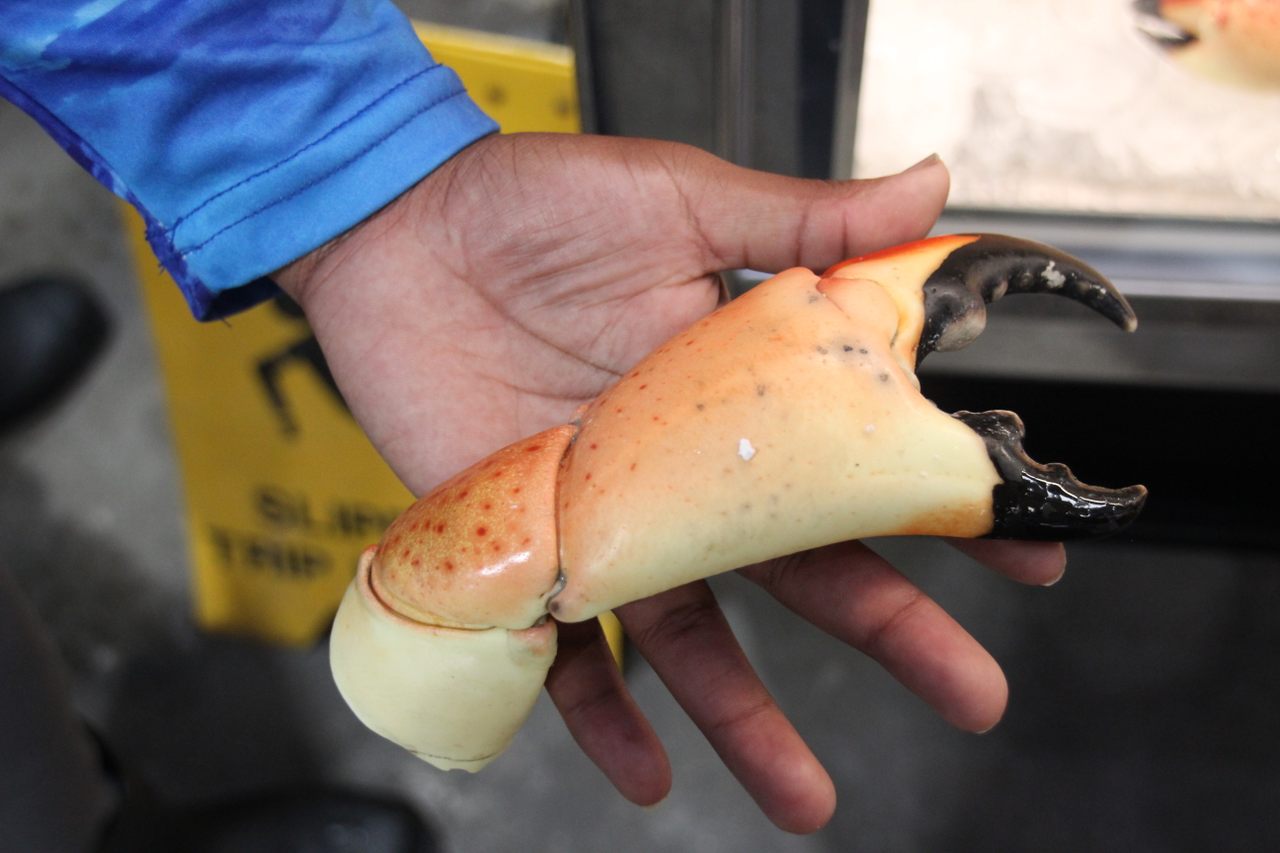 As I await my order of stone-crab chowder, I marvel at the massive claws on display at Keys Fisheries, a processing facility with a restaurant, tiki bar, and retail shop in the Florida Keys. “Select” claws start at $39.95 per pound. “Jumbo” go for $63.95. Locals bring back these massive crab claws from the Gulf of Mexico waters I can see from my dockside table.

Over a loudspeaker, fake names, which are assigned at checkout, crackle for order pick-up. “Bob Marley, your order is ready. Bob Marley. Keith Richards. Your order is ready. Jimmy Buffet.” That’s me. As I devour the thick corn chowder with peppers and crab-claw meat, Paid by the Pound, one of about 20 boats that fish from Marathon, pulls into port. It’s late April, so the crew of four is unloading hundreds of stone-crab traps before the season ends in a few days.

I’m joined at my table by three people responsible for my lunch: fisherman Ethan Wallace, Keys Fisheries vice president Scott Dekle, and general manager Mike Priebel. Born in Key West, Wallace is a stocky young captain, deeply tanned but not yet weathered. As he describes a typical day, I appreciate the chowder even more.

“We leave at three, four o’clock in the morning, get in five, six at night,” he says, speaking in seamless, monotone phrases. “I usually go with three crew, try to avoid greenhorns at all costs. One winches, one stacks. The other takes all the bones and fish out, rebaits. We’re just nonstop.”

After hearing more about backbreaking days and using GPS and fishing software to keep track of his 5,600 traps, I ask about the astonishing fact that brought me here: Wallace and his crew harvest thousands of pounds of claws. But they expect most of the crabs they catch to survive. They simply throw them back to regenerate new limbs.

This is possible, I learn, because crabs are among those animals that perform a miracle known as autotomy. When facing a predator, they give up a body part they can regenerate. When attacked, a crab can surrender one, or even both of, its claws. They detach along a break point perfected by evolution to leave a critical diaphragm intact, which seals the injury and stops the bleeding. Then, over the next one to three years, the claws regenerate, until the crab can once again use them to break open its favorite foods such as mussels and oysters.

Crabbing captains like Wallace train their crews to separate the claw from the crab at this spot, then toss them back overboard alive. “This is the only fishery where they don’t kill the animal. They just harvest the claw and put ‘em back,” says Dekle, echoing the industry’s claim that this is the world’s only renewable seafood.

Floridians have been fishing, selling, serving, and eating stone crab since the 1890s. Then, in 1913, Joe Weiss opened a Miami Beach lunch counter, where, a few years later, a Harvard ichthyologist on a research trip showed up with a burlap sack of live crabs, asking if Joe’s ever served them. Although he was skeptical, Weiss tried boiling them and serving the claws chilled and cracked with hash browns, coleslaw, and mayonnaise. They were a hit.

Joe’s wasn’t the first eatery to offer stone crab, but it quickly became the best known. Keys Fisheries was founded in 1967 when a Joe’s representative showed up in the Keys in search of an ever larger and steadier supply of stone crab. A small fleet out of this port has been supplying the restaurant with hundreds of thousands of pounds of stone-crab claws ever since. Joe’s Stone Crab is now a Miami institution and one of the highest grossing privately-owned restaurants in the United States. None other than James Bond claims he had the best meal of his life at a fictionalized Joe’s in Goldfinger.

Keys Fisheries adopted the claws-only fishing practice (already known by some in the Keys) for practical reasons. “They came up with it because this marina was getting so choked with dead crabs,” says Priebel. “There were mounds of crabs coming out of the water.” By 1973, the practice was inscribed in federal law.

In the 1970s, a proposed regulation would have limited the harvest to one claw per crab. After all, to regenerate a limb, a crab needs lots of food, and a crab with one claw can still hold mussels and oysters with its legs and then crack them open. When a claw is lost due to natural causes, the estimated survival rate is close to 100 percent.

But fishermen rejected the regulation and often take both claws when they meet the minimum size requirement. Priebel, while conceding that crabs without claws are more susceptible to predation, notes that nothing will stop an octopus from eating a crab, claws or no claws. “And goliath groupers eat them like Tic Tacs,” he says.

“I catch ‘em all the time with no claws,” adds Wallace, who returns those crabs to the water to regenerate. Still, the survival rate for single claw removal is estimated at about 70 percent and for double removal at about 50 percent.

“Based on studies, I’d say that the stone crab fishery was minimally to moderately renewable,” says Dr. Theresa Bert, who has studied the fishery since 1978. Now retired, she was a research scientist with the Florida Fish and Wildlife Conservation Commission.

Bert bases her assessment on several factors. A crab may take up to three years to regenerate a claw, and they only live to about seven years. Survival depends on various factors, including the expertise of the crabber. “Regenerated claws can constitute only eight to 15 percent of the catch,” she says. “It’s not like replanting trees to get a new forest.”

The Keys’ stone-crab industry is unusual, but not completely unique. China has the world’s largest crab fishery, accounting for 40 percent of the total global catch, and one of its several species, the box crab, is now fished in claws-only fashion, but not universally. In New England, claws-only fishing is new for the Jonah crab fishery, representing one percent of total catch.

Notably, while declawing offers the promise of a non-lethal catch, jurisdictions around the world, including parts of the United States and especially in Europe, now forbid or severely limit claws-only fishing for species such as red, brown, and fiddler crabs. This is due to conservation concerns (declawed crabs have higher mortality and are less successful at mating) and animal welfare (while crabs’ claws evolved to break off, research suggests that crabs experience physiological stress akin to pain when their claws are removed.

When it comes to sustainability, many crabbers, regulators, and researchers are more concerned with reproduction than regeneration. It’s the remarkable rate at which stone crabs reproduce that probably accounts for the health of the stocks: Each female produces six to 10 egg masses every spring, and each mass may contain from 160,000 to 350,000 eggs. The FFWCC has also introduced conservation measures such as shortening the season to protect egg-bearing females and, as of 2023, mandating that all traps have an escape ring for undersized crabs.

As I finish my chowder, Captain Wallace says this season was a good one, possibly the best since Hurricane Irma in 2017 and the red tide that followed. I can understand the skepticism of those making a living from crabbing about the conclusions of researchers on the practice of taking both claws. Speaking to Bert, though, has also made it clear that while the claim to “the world’s only renewable seafood” has merit, it comes with qualifications.

Still, from scallops to sardines to squid, there’s no other fish that gives up a pound of flesh for human consumption only to grow it back.

Tristan da Cunha was first inhabited to keep an eye on Napoleon; now residents are looking out for lobsters.
poison

“If you can’t gather shellfish then you’re going to starve.”
animals

An unloved invader has found its way onto menus across the region.
food

New Jersey's Passaic River has been unsafe to fish for decades.
Video

Florida's oldest bar was once a morgue, complete with a hanging tree and gravestones.
London, England