The Special Stew at the Heart of Sumo Wrestling - Gastro Obscura 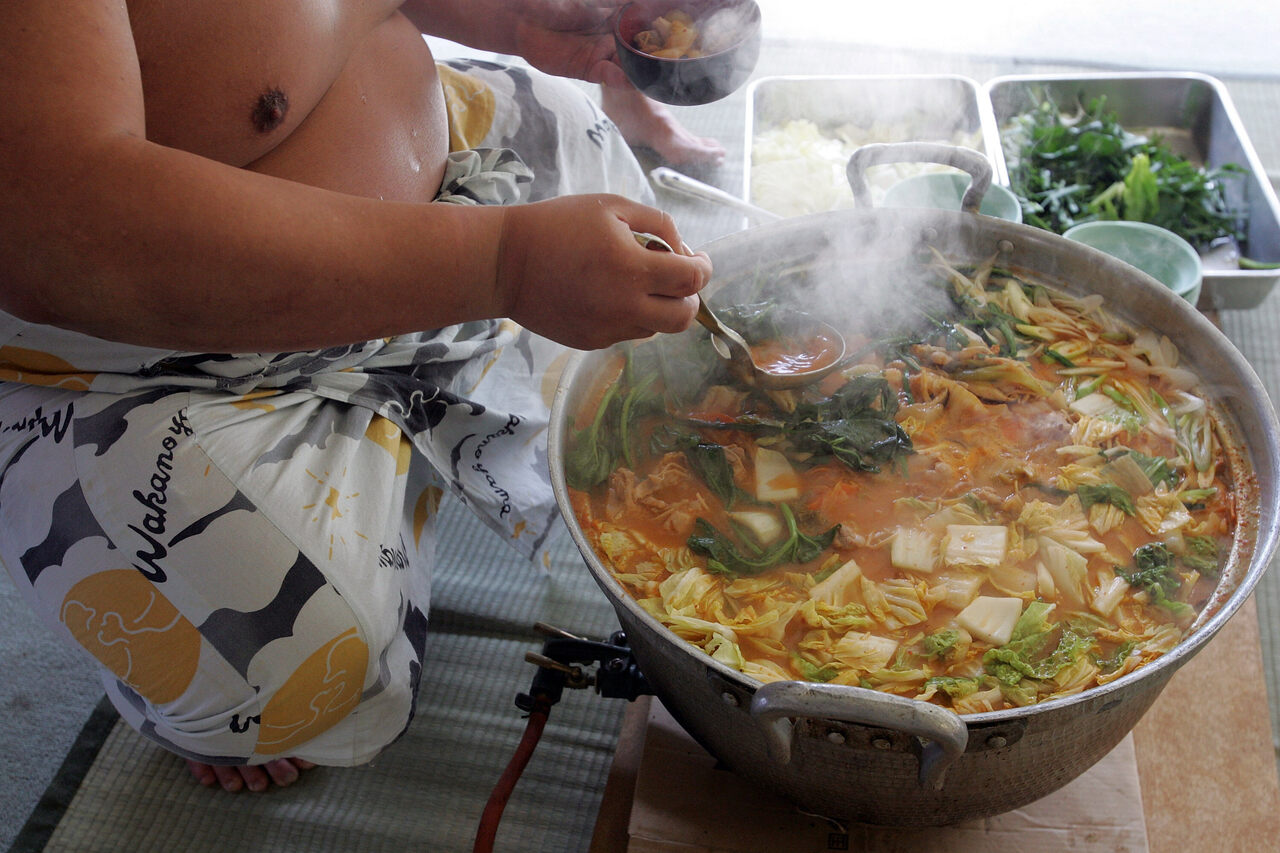 A sumo wrestler dishes up chanko-nabe during a "Sumo Diet Campaign" event in Osaka, Japan. Junko Kimura / Getty
In This Story
Place

Sidle into a side alley for a taste of sumo wrestlers' traditional hot-pot soup, in a tiny restaurant founded by a former competitor.
Destination Guide

Sumo wrestlers have always been huge, but they’ve also never been bigger. An influx of Hawaiian and Mongolian champions over the past decades has sent the average weight of champion wrestlers soaring from just under 300 pounds in the 1930s to well over 400 today. Naturally smaller Japanese competitors must eat all they can to keep up.

In sumo, the heavier competitor has an advantage—there are no separate weight classes, and the small ring has gotten no larger to accommodate heftier competitors. Wrestlers, therefore, will eat and eat and eat in a highly regimented fashion to get as large as they can. At the heart of this process is a stew called chanko, sometimes known as chanko-nabe. (‘Nabe’ means pot.) Chanko defines their lives so completely—most wrestlers eat it at almost every meal for years—that it has come to symbolize the sport and dominate their lives even after they retire.

Technically speaking, anything prepared and eaten by sumo wrestlers can be called chanko—the dish is defined by its association with the sport rather than a recipe. But the average Japanese person will tell you that chanko is a stew or soup: a pot of bubbling broth, to which ingredients are added or removed. In some respects, it’s not so different from shabu shabu or other hot pot dishes. It usually features one kind of meat or fish, tofu, vegetables, and big chunks of calorie-dense mochi, a starchy cake made of pounded glutinous rice. (A matchbox-sized hunk of mochi might have as many calories as an entire bowl of rice.) The broth may be chicken, miso, soy, or salt-based: Training houses usually have their own signature soup. It’s cheap, hearty fare, but in ordinary quantities, not intrinsically fattening.

Instead, it is the way chanko stew is consumed that makes it a cornerstone of sumo dining. An ordinary person might have one or two bowls of chanko. Wrestlers, meanwhile, skip breakfast to work up an appetite, then regularly eat as many as ten bowls for lunch, washed down with copious amounts of beer. All that chanko is converted into extra bulk by taking a hard-earned nap straight after lunch. As David Benjamin writes in Sumo: A Thinking Fan’s Guide to Japan’s National Sport: “When you’re a sumo wrestler, you get to live in a clubhouse where no girls are allowed. You’re encouraged to eat all you want and have ‘thirds’ on dessert. You nap all afternoon, and drink beer all night.” Matches are a few seconds long—you’ll never be late for dinner—and held in a comfortable, climate-controlled environment.

This is all true, but downplays the structure and rigor of “the clubhouse,” more commonly known as a heya, training house, or stable. Every heya has its own rules, structure, and traditions, and almost all are run by a training master (oyakata) and his wife. These two take an almost parental role in the lives of their charges, many of whom move into the stable at the age of just 15 or 16. Each wrestler has chores to perform, which change with their superiority. A surprising number of these revolve around chanko.

At the most lowly end, chanko chores involve setting up the eating area, cycling to buy groceries, or chopping vegetables. (The highest-ranked wrestlers are usually tasked only with making public appearances or entertaining patrons.) While kitchen duty may be entry-level, being in charge of the kitchen—chankocho—is a position of respect. Beyond chopping and menu planning and budgeting, writes R. Kenji Tierney in an essay in the journal Food, Cultural & Society, “[It is] also an acknowledgment that the wrestler’s future is not in the ring, but in some faraway kitchen.”

Not every wrestler can be a champion. For the vast majority who leave the house after a decade or two, chanko can be the route into another profession. In these instances, the non-wrestling skills they have learned in the stable are often the most useful—chopping, certainly, but also managing others in the kitchen, cooking, and keeping to a budget. “As a wrestler ascends in seniority, depending on his wrestling trajectory, he will either gain cooking duties with more responsibility or he will be excused from the kitchen completely to fulfill the duties of a prominent wrestler,” Kenji Tierney writes. Many retired wrestlers work at sumo-themed restaurants called chankoya, where high-end seafood chanko is the main attraction. The most famous among them will even open their own eponymous chankoya, where their stardust attracts clients as much as what’s on the menu—among them, Kotogaume Tsuyoshi, who enjoyed some high-profile success in the 1980s and 1990s. For such men, chanko continues to define their lives long after retirement.

In the heya, each meal has a strict structure. Every day, junior wrestlers rise early to train and then prepare the meal while their superiors snooze. At lunch time (wrestlers do not eat breakfast), they must serve them. At any one time, only five or six wrestlers can sit around the pot, with the heavyweights getting first dibs. Chanko is served with bowls of rice—eaters reach into the pot for particular morsels, and occasionally raise their hand to indicate an empty bowl. Junior wrestlers are expect to watch hawkishly and anticipate the needs of hungry seniors.

Only when a wrestler has finished can the one below him in rank sit down and take his place around the roiling pot. As a result, the junior wrestlers are often left with the dregs of the stew, after the top wrestlers have taken all of the best ingredients. At that point, they may add instant noodles to bulk it up and make the most of the paltry tidbits that remain.

In Japan, the national love of sumo has brought chanko well and truly into the mainstream: at specialist chankoya, in ordinary restaurants, and even at the supermarket, via chanko-flavored instant ramen. It’s also possible to enjoy chanko as a guest in the training house. Often, these invitations are a perk for patrons who subsidize wrestlers’ salaries and costs. It is rare for them to be extended to foreigners. The rapper and author Action Bronson was one such guest, while doing research for his book F*ck, That’s Delicious: An Annotated Guide to Eating Well. He reviewed it positively: “I think the chankonabe was by far the best soup I ever had … I mean, it was better than any broth ever in the history of life.”

But not every review is so superlative. “Sometimes, the most authentic chanko actually tastes bad,” writes Kenji Tierney. Chanko is above all fuel, rather than food—the taste is important, but a secondary concern. Inexperienced chefs or underfunded training houses may make deeply underwhelming stew that still passes muster. For foreign wrestlers who have moved to Japan to live, train, and compete, this can be hard, Tierney writes, as they struggle to adapt to eating chanko “day in and day out.” The flavors are unfamiliar, and even young Japanese wrestlers find it hard to adjust to this gastronomic tedium, especially if, as is often the case, they’ve grown up eating food from all over the world.

Nonetheless, the stew persists, and for reasons that are as symbolic as they are practical. Sure, in large enough quantities, chanko can beef up wrestlers at minimal expense. But more than that, it defines the sport and its participants. In a separate essay, Tierney describes commentators discussing how long a wrestler had been competing in terms of the stew—veterans are often said to have “the flavor of chanko … steeped into [them].” Sumo wrestlers might not always be in the mood for chanko, but it is as much a part of their world as the sport itself. Each competitor owes his bulk, and his success, to pot after pot of this all-important stew.

Make bread fit for a pharaoh and a sweet treat out of tiger nuts.
food

The 1976 book included contributions from the Black Power and Gay Liberation movements.
List

For the Great Eater of Kent, it was all ale-soaked bread and wheelbarrows of tripe.
Read more
Thanks for sharing!