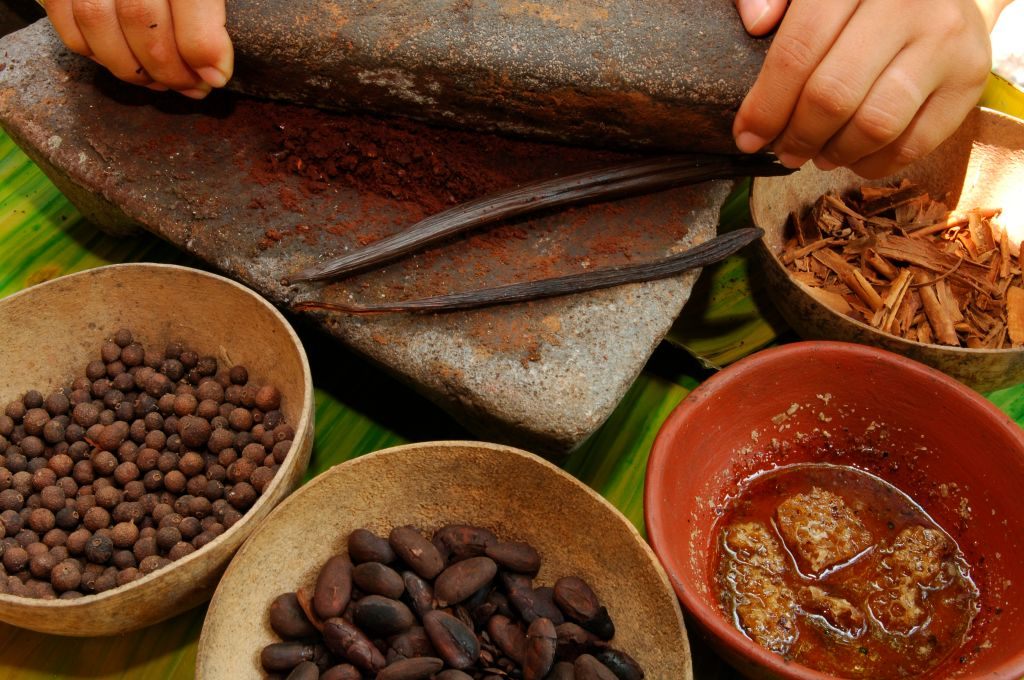 Tools and ingredients used thousands of years ago in Texas are still utilized today. REDA&CO/Getty Images
In This Story
Destination Guide

50 miles north of Austin lie the remains of a gravel floor and wall. While it may seem unassuming, it’s what’s left of the oldest-known house in North America. Just outside the home is a cooking site strewn with the ancient traces of meals cooked with fire. This is where the history of what can be called Texas Mexican food begins, and where it gets its character as comida casera, or home-cooked food.

The house is one of the extraordinary findings at the Gault Archaeological Site. Between 1999 and 2002, researchers recovered an astonishing 1.4 million artifacts in the area, among them the house floor, which researchers speculate could date back as far as 15,000 years. The burnt rocks outside are even older, at 20,000 years.

The people who lived there were “broad-spectrum hunters and gatherers,” according to Dr. D. Clark Wernecke, Executive Director of the Gault School of Archeological Research. They cooked pronghorn antelopes, turkeys, deer, rabbits, ducks, and quail, and his team has identified turtle bones, mollusks, and burnt frog bones. “And if they are eating turtles and mollusks, I have no doubt they are eating fish and crawfish,” Wernecke adds.

They also ate other familiar Texan specialties, such as pecans and black walnuts, along with acorns, grapes, berries, and tubers. Although plant foods do not survive over millennia like bones, stones, and shells, archaeologists are able to analyze tools with a procedure called starch grain analysis. Starch grains are pretty indestructible, says Dr. Wernecke, and they adhere to the edges of tools. Some of the starch grains show signs that they were boiled.

Over the last 9,000 years, the repertoire of these early home cooks expanded from fire roasting and boiling to include baking in earth ovens, steaming, drying, smoking, stewing, and roasting. They utilized mortars to grind mesquite pods and nuts, and prepared dishes with squash, corn, and beans, all foods from that ancient period. In many ways, families who lived at the Gault site ate much like Texans eat today.

“Everybody we are talking about is a modern human being, exactly like us,” says Wernecke. They were a highly sophisticated and knowledgeable culture, but that’s not the history that is generally told about the first peoples of Texas. “It’s God-awful if you look at most fourth grade textbooks,” he says, noting that illustrations sometimes represent early Texans as “hunched over and hairy and somewhat apelike.” The Gault site is changing that false, demeaning narrative in two important ways.

First, it corrects the scientific record. Wernecke says that the story that many Texans are taught, that people arrived in the area 13,500 years ago, is false. Gault shows that people were here perhaps even 25,000 years ago, and that they did not constantly migrate, but settled into developed societies.

Second, and more importantly, the Gault site is “changing the notion that these are half-naked people running around after big animals,” he says. Their tools and cooking techniques were not ‘primitive,’ as they have often been described. Quite the contrary, those tools are important inventions, and according to Wernecke, “we still use every single one of them.”

These techniques were common throughout the entire central and south Texas region, where robust trade was supported by an extensive system of travel routes. Dr. Alston Thoms is an anthropologist at Texas A&M who has excavated and surveyed archaeological sites all over Texas. He says that the Gault site, together with others throughout the state, presents a clear picture that local indigenous people were well-travelled, even to what is now Mexico City.

This is why the indigenous food of Texas resembles the food of Mexico, with its squash, corn, beans, prickly pear cactus, chiles, and chocolate. Across Central and South Texas and northeastern Mexico, the Karankawa, Tonkawa, Coahuiltecan, and others developed the distinct style that is today’s Texas Mexican food. By the 17th century, they had incorporated the pigs, cows, goats, and sheep, as well as the spices like black pepper, cumin, and garlic brought by the Europeans.

But more recently, the names and identities of Native American peoples were erased. In 1837, the Standing Committee on Indian Affairs of the Republic of Texas issued its report to then-President Sam Houston and declared: “The People called Lipan, Karankawa and Tonkawa your Committee considers as part of the Mexican nation and [are] no longer to be considered as a different People.” Texas’s native peoples suddenly became Mexicans.

Thoms says that this type of erasure eventually led to expulsion. In the 1800s, groups that still held to indigenous identities, including the Tonkawa and Caddo, were forcibly removed from Texas into Oklahoma.

Yet indigenous peoples continued living in Texas under harsh circumstances, finding continuity and identity in their cooking. To this day, says Thoms, indigenous Mexican Americans in Texas today are “sustained on the same foods as their ancestors.” And beyond that, he notes that tomatoes, pecans, chiles, squash, and beans “are all Native American foods that sustain the whole world today, and they were domesticated right here.”

Attempts at erasure notwithstanding, Texas Mexican families continued cooking and enjoying the delicious culinary heritage of their ancestors. Comida casera still relies on ancient techniques, such as roasting for the famous barbacoa (beef cheeks) and drying for machacado (dried beef strips). The cuisine is also a feature of local Mexican restaurants. In Houston, celebrity chef Sylvia Casares, a native of Brownsville in South Texas, leads the vanguard, giving resonant cultural expression to a cuisine that has gone largely unnoticed, lost in the shadow of Tex-Mex.

Food writers of the 1970s began defining the Mexican food of Texas as an Anglo-Texan creation. They started calling it Tex-Mex, describing it as south-of-the-border food transformed by American tastes, with the indigenous roots of the food completely overlooked.

“I get angst when it comes to Tex-Mex,” says Casares. Knowing that her food can be described that way, she says it’s completely different from what most people have experienced. Her restaurants don’t use spice powders or canned goods, and “our dishes don’t have all that yellow cheese,” she says. Instead, she cooks the regional cuisine she ate in South Texas every day until she went off to college.

At her two Sylvia’s Enchilada Kitchen restaurants, the menus proudly list “North of the Border” plates such as calabacita (squash) enchiladas and crab in a creamy seafood sauce. She serves quail that’s grilled on mesquite, just as it would have been done by families at the Gault site thousands of years ago. It’s served with corn, also grilled, and charro beans, made with the pintos which are an iconic element of Texas Mexican cuisine.

Casares, who has been invited to showcase her food at the James Beard House in New York City, says that people don’t necessarily understand that this food has evolved over millennia. “They just know it’s wonderful,” she says. “I cook the foods that our grandmothers, our mothers, our aunts cooked at home.” That’s the way it probably was in that home of 15,000 years ago at the Gault site as well, with people enjoying the pleasures of home-cooked food.

Make bread fit for a pharaoh and a sweet treat out of tiger nuts.
restaurants

Researching traditional foods led them to the revelations of an archaeological dig in Kentucky.
Video • Wonder From Home

This gas station offers wine tastings and craft beer.
Want to see fewer ads? Become a Member.
From Around the Web
THE GASTRO OBSCURA BOOK
Taste the World!
An eye-opening journey through the history, culture, and places of the culinary world. Order Now