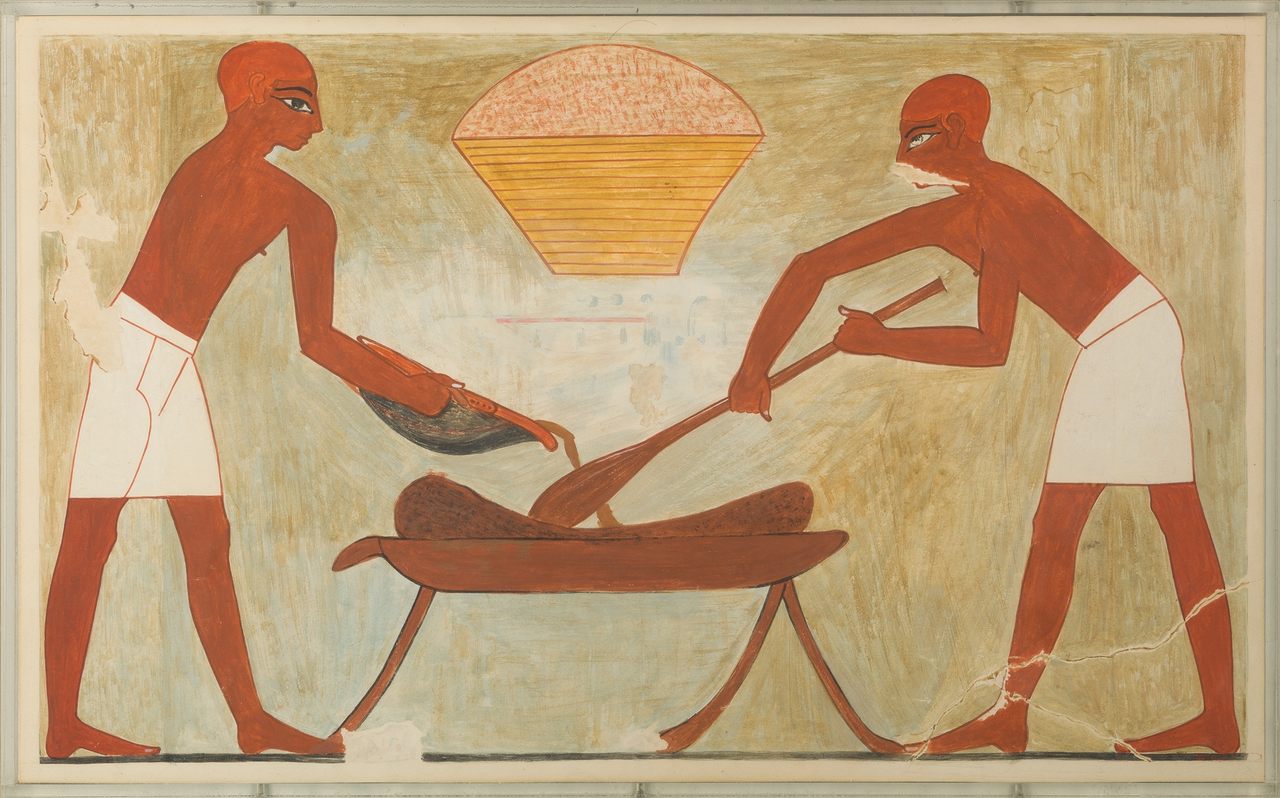 Two workers blend a tiger nut mixture for cakes in this painting from the tomb of a vizier. Public Domain
In This Story
Destination Guide

The ancient Egyptians left writing everywhere, with hieroglyphs carved painstakingly onto stone steles and miraculously preserved in papyrus. Though historians are able to study ancient texts on subjects from trade to funeral rites, one category is largely missing from the record: recipes. Without any textual directions or menus, historians have looked elsewhere to unlock the secrets of a 5,000-year-old culinary culture. As it turns out, paintings on tomb walls can provide a rare glimpse into one of the oldest cuisines in the world.

Around 3100 BC, ancient Egyptians started to systematize their hieroglyphs, mummification techniques, and art, all of which influenced the construction of tombs. The most decorated tombs of the time, especially those adorned with food scenes, belonged to royalty. Workers painted scenes on tomb walls to commemorate the deceased’s accomplishments and to ensure that important ceremonies, from food to burial rituals, would endure in the Field of Reeds, the Egyptian afterlife. Some tomb paintings even included images depicting how workers prepared food.

Historians agree that tiger nuts (hab al-‘aziz), edible tubers found at the end of the Cyperus grass, were the primary ingredient in what could be considered the oldest-known Egyptian recipe, which dates from the 15th-century BC. A tomb painting interred with the vizier Rekhmire details how to make cone-shaped loaves of ground tiger nuts and honey. The scene depicts figures grinding tiger nuts with long pestles, and shaping the tuber-honey mixture with both hands into tall and pointy cones.

These images of tiger nut cones were meant to please the sun god Amun on Rekhmire’s behalf. But tiger nuts were not just used for special occasions. Egyptians also added tiger nuts to medicine and perfume, and ate them prepared in several ways. Some devoured tiger nuts raw, but others preferred it flavored, boiled in beer, or roasted atop a fire.

As popular as tiger nuts were, bread and beer formed the true bedrock of ancient Egyptian cuisine. Bakers usually made bread with emmer wheat and barley, two of the oldest cultivated grains. Bread was so important, in fact, that it had an outsized influence on ancient Egyptian writing. Historians have recorded 14 distinct hieroglyphs for bread.

To learn more about the process of baking ancient bread, researchers looked again to tomb paintings. One of the most vivid bread baking scenes comes from the Fifth Dynasty tomb of Ту in Saqqara. One painting shows beer and bread production in tandem, with scenes of cooks making bappir, or beer bread, and the use of bedja, or ceramic bread molds for baking. The scene shows workers cooking bread outdoors through a process called stack heating, which involves baking bread dough inside two preheated bedja bowls clamped together. Additional tomb paintings convey many more steps of the baking process, such as workers kneading dough with both hands or mixing bread with their feet.

Another baking scene, from Ramses III’s tomb, suggests a possible recipe for emmer wheat bread that was sprinkled with grape juice to leaven it and boiled before baking. Drawn in motion, the workers smash grapes with their feet, shape bread into spirals, and bake the bread in a vertical tanoor oven.

These images tell one story about ancient Egyptian cuisine. However, it’s important to note that many did not have the same access to this food culture. The wealthy dead could command elaborate tomb paintings, specialty food items, and even food mummies of many varieties. According to Egyptian food historian Mennat-Allah El Dorry, food remains from the construction of the Giza pyramids show evidence of this divide: the wealthy ate larger cuts of meat and a varied diet, while simple workmen ate poorer cuts of meat and simpler foods. But besides this scant evidence, not much is known about class disparities in ancient Egyptian foodways.

Even though Egypt’s tomb paintings miraculously endured for thousands of years, more recent events have imperiled them. The vibrant paintings within Ramses III’s tomb nearly vanished due to early-19th century floods. Since the floods, historians have tirelessly worked to restore, reconstruct, and upload photographs of the paintings to the internet for future research. For some tasty research of your own, try your hand at these recipes for tiger nut cones and emmer wheat bread, inspired by ancient Egypt’s tomb paintings.

1 cup of tiger nuts, raw (tiger nuts can be purchased online or at many health food stores.)

Tell Us About the Most Wondrous Things in Your State

To better understand the distant past, it can help to taste and smell it.
food

The Italian Town Where You Can Eat Like a Renaissance Royal

You may not be a prize winner, but you can eat like one.
beer

Drink like King Midas and George Washington with these brews.
Video • Gastro Obscura

This eatery is emblematic of the connection between Jamaica and Nubia.
Vila Nova de Gaia, Portugal

On the shores of Lake Superior, a small group of monks makes sacred sweets.
Want to see fewer ads? Become a Member.
From Around the Web
Atlas Obscura Trips
In the Footsteps of Pharaohs: Exploring Ancient Egypt
View This Trip
Thanks for sharing!