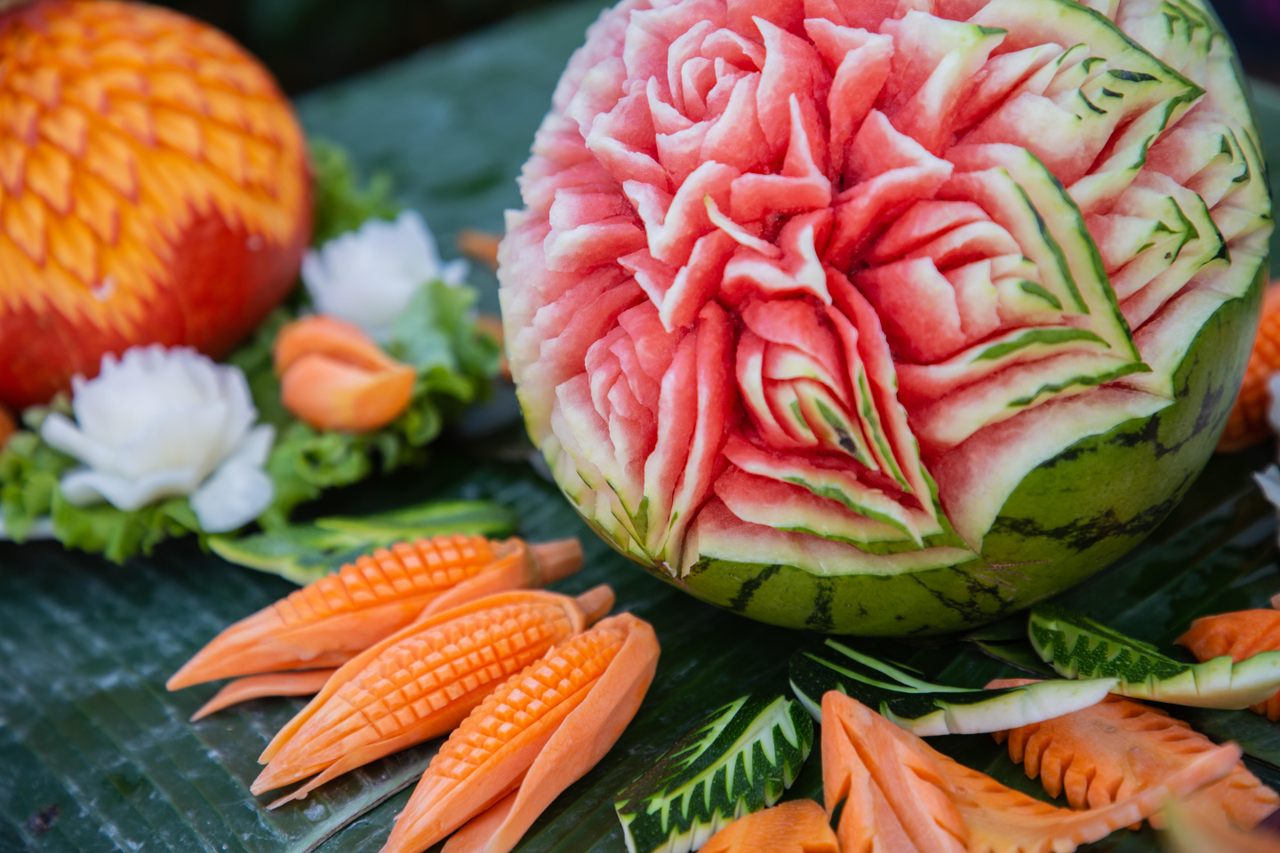 Carved fruit and vegetables were once a must for banquets and events. Tapati Rinchumrus / Alamy Stock Photo
In This Story
Destination Guide

In the unassuming Bangkok condo that serves as Wan Hertz’s classroom, one wall is devoted to her certificates. Some are her credentials as a legitimately trained fruit carver; others are government endorsements attesting to her skills. And a handful are awards from global competitions, placing her in the top tier of fruit carvers in the world.

“Anyone can be good at this, as long as you have perseverance,” says Hertz, who is helping Oklahoma couple Shevaun and Terrance Williams coax petals out of a stubborn carrot. All the same, she says, “the best carvers in the world are Thai.”

Out of the many culinary stars spawned by social media—pastry chefs towering over edible replicas of city landscapes, fresh-faced vegan chefs preaching the joys of clean living—fruit carvers may have had the most to gain. Their work, birthed over hours or even days, hunched over alone and in obscurity, can now literally blossom under the watchful eye of the camera, revealing itself via video or snapshots on Facebook and Instagram. Today, fruit carvers can be stars like Massimo De Vita, with thousands of followers and his own television show.

In Thailand, the art of fruit carving, or kae sa lak polamai, was once showcased at every major event and banquet. Whereas Chinese carvers specialized in shaping human figures or animals and the Japanese preferred patterns, Thais excelled in floral motifs. Every main dish at a Thai restaurant with fine dining pretensions was accompanied by fruit or vegetables carved into flowers or leaves, and the artists themselves were featured in dining rooms, displaying their craft to the masses.

Today, it is considered a dying art. At the same time, Thailand’s long history of fruit carving is being shunted to the background as international news stories trumpet the craft as a rising trend in the West.

“There is no child who wants to do this,” says chef Supapit Opatvisan. A Thai culinary instructor at Le Cordon Bleu Dusit in Bangkok, he counts himself as having been one of those children, forced to learn fruit carving at school because the flower arrangement class was full.

Learning to artfully carve fruits and vegetables is a traditional skill for Thai chefs, but there’s a catch. “You see the results slowly,” explains Opatvisan. “You discover you are good at it in six months, maybe a year.”

“If you don’t know fruit carving, you can still be a Thai chef,” he continues. “But if you do know it, it makes you that much better than the average chef.”

In the early 20th century, the very best Thai chefs worked at the royal court. Strict rules governed the appearance of royal dishes, where food was expected to satisfy three precepts: aharn pak, aharn tha, and aharn jai, or food for the mouth, eyes, and spirit.

“When you serve food to the royal family, the food must be delicious, but also very beautiful,” says Sidhorn Sangdhanoo, a Thai language professor whose mother worked in the royal kitchens in the beginning of the 20th century. A red curry needed to include green eggplants; a green curry had to hold accents of red. Once a week, a nam prik, or chili relish dip, was served with herbs and painstakingly carved vegetables. When the king was especially pleased with a dish, he placed four baht (about $20 today) on the tray as a reward to the cook.

“When we praised mother for a very good dish, she would always reply, ‘Give me four baht,’” says the 86-year-old with a laugh.

Not surprisingly, the ritual of dining in the royal court contributed to the aura of prestige that surrounded the Thai throne. Every household in the palace—headed by a different wife—vied for the honor of having the best table or excelling at a particular domestic art.

Of course, fruit carving was one of those arts. It’s said to have originated in the Sukhothai era (1238-1438), when a concubine decorated a floating lantern with flower and bird shapes carved from fruit. Such was the importance of fruit carving that a famous legend tells of a king discovering that his long-lost mother worked in the kitchen, after she carved his life story onto the side of a green melon and served it to him as a soup bowl.

But fruit carving was only one of the food-related signifiers wielded by the palace to display the power of the monarch, says Sirichalerm Svasti, who grew up in the palace as a child.

Svasti—better known as the TV cooking personality Chef McDang—says that royal kitchen rules were myriad: no bones, pits, or seeds; no extremes in flavor; only prime, seasonal ingredients. Diners were served Russian-style, with servers bringing trays to the table from which people could help themselves. Food was already cut into bite-sized pieces, so there were no knives in the table setting, even when Western food was on the menu.

The monarch, seated at the middle of the table, had his own set of cutlery and dishes that no one else could ever use; his own food was served wrapped in muslin and closed with a wax seal. The seal could only be broken by his taster, who had to test his food for poison; as a result, the monarch’s food was always lukewarm at most. When he finished, everyone else had to be finished too.

Naturally, every dish was garnished with beautifully carved fruits and vegetables. “There are 30 servants in the kitchen. They need something to do!” jokes Svasti. But “you don’t eat that, okay?” he says. “It’s a decoration. Don’t be an idiot.”

Although Thai fruit carving is taught in schools and considered a cherished part of national culture, there are fewer and fewer places for carvers to display their craft. Hertz used to carve fruit for a host of hotel kitchens, from the Mandarin Oriental to the Marriott Riverside. Fruit carving at hotels has since gone by the wayside, replaced by a focus on spas. Today, she runs the Siam Carving Academy out of her home.

There is less of a focus on fruit and vegetable carving in fine Thai restaurants as well. “We used to do more of it,” Ruen Urai’s Vitayaku admits. “I see it as fuddy-duddy and old-fashioned. It is also a waste. You throw it away after two days.”

Still, the Khon Kaen-bred Hertz, who has been carving since she was seven, continues to compete internationally. In her opinion, the most difficult mediums are taros and turnips, as they’re too brittle for rough handling. It takes her 15 minutes to carve a rose from a tomato, and an hour for a melon. Although some carvers boast a whole arsenal of carving tools, Hertz only uses her meed keed, a flexible blade extracted from a hacksaw.

Winning competitions usually only results in a little money and a certificate. “But those certificates help when you are applying for your next job,” Hertz says.

At the same time, the spirit of fruit carving lingers on in a younger generation. Subphachittra Dinakara Sukarawan, third-generation owner of the ML Puang Dinakara cooking school, presents a modern, more glamorous image of a Thai fruit carver through her social media accounts on Facebook and Instagram.

Sukarawan sees the internet as a boon to fruit carving, both in Thailand and abroad. “Today we have open sources of information and knowledge available to those who are interested in fruit carving, such as YouTube,” she says. “This is totally different from back when all of this knowledge was only conveyed to certain groups, within family members or the palace.”

Even “when someone learns to carve an exquisite motif on a guava,” she says, that means this most traditional of Thai arts has a chance to spread and live on.

Guorui Chen brought a hometown tradition back from extinction.
food

In 2022, we covered the world’s most creative cuisine.
food