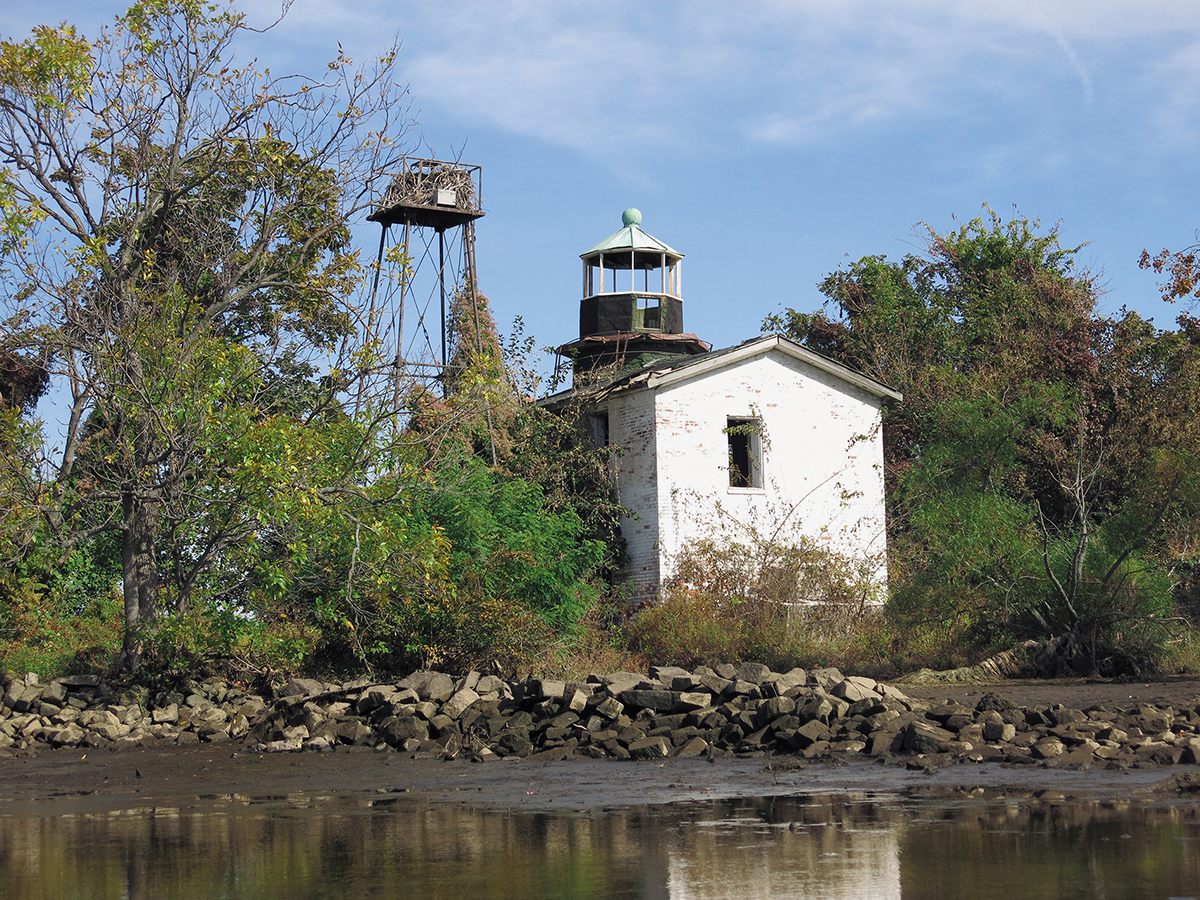 Fishing Battery Lighthouse in Maryland. The light was transferred to the tower in 1928; the original structure remains dilapidated. Ralph Eshelman/ Courtesy Rizzoli Books

Sometime around 1919 (reports vary as to the exact date), the Rubicon Point Lighthouse shut down.

During its brief existence, having been completed just three years earlier, in 1916, it illuminated the water of Lake Tahoe for passing steamers and mail ships. It did so from an elevation of 6,300 feet, making it the highest lighthouse in America. But it wasn’t spectacular to look at. Wooden, square, and only 12 feet tall, it didn’t have the capacity for a lighthouse keeper, or anything else really aside from an acetylene gas lantern that flashed every five seconds onto the lake below. After it was replaced by the Sugar Pine Point Lighthouse, Rubicon Point remained in situ. For many years, hikers mistook it for an outhouse.

Rubicon Point is just one of many abandoned lighthouses across the United States. There is even a lighthouse “Doomsday List” published by Lighthouse Digest, of those on the brink of destruction (Rubicon Point was on the list in the 1990s, although it has since been renovated). Some are famous, such as the St. George Reef Lighthouse that lies six miles off the coast of Northern California. Constructed of granite and concrete atop a treacherous outcrop of rocks, it was designed to withstand the monster seas that frequently roiled around this area of the coast. The only way onto the lighthouse was via a 60-foot boom, which would winch up small boats. Both keepers and Coast Guards lost their lives trying to reach the St. George Reef. One particularly unforgiving storm produced a wave so fierce it broke the glass in the lantern room.

The St. George Reef Lighthouse was decommissioned in 1975 and replaced by a floating buoy. It sat, empty and abandoned, until the St. George Reef Lighthouse Preservation Society took over management of the site in 1996 and began to operate helicopter tours to fund its preservation. In March 2012, an automated light was installed, giving the tower a second chance at life.

Not all of America’s abandoned lighthouses are as isolated, or as dangerous. Off the coast of North Carolina is the Frying Pan Shoals Light Tower, a squat, steel lighthouse that more closely resembles the platform of an oil rig. It operated as a light house for 13 years, but today, thanks to its 5,000-square-foot living space and helipad, it’s a bed and breakfast for adventurous tourists.

These lighthouses appear—along with many beautiful, still-functioning ones—in the new book Lighthouses of America. Of the enduring charm of lighthouses, the book’s editor and former Coast Guard rescue pilot Tom Beard writes, “Open seas in darkness is an eerie, sometimes frightening experience for navigators, but a distant, flashing light to sailors conveys a symbol of hope, tranquility, and comfort. Inside the tower, stalwart lighthouse keepers, tending lights in all manner of weather and personal privation, add to the mystique.”

Today many lighthouses run on solar power or make use of LED technology, but they still evoke a nostalgic mood of beacons flashing quietly through the night, illuminating remote coastlines and isolated islands. Below, a selection of images from the book shows how these landmarks have evolved over time.

How did these nostalgic vehicles become fixtures in cities across America?
lighthousesvisualphotographyabandoned