The Best Kitchen Gadget of the 1600s Was a Small, Short-Legged Dog - Gastro Obscura
Want to see fewer ads? Become a Member. 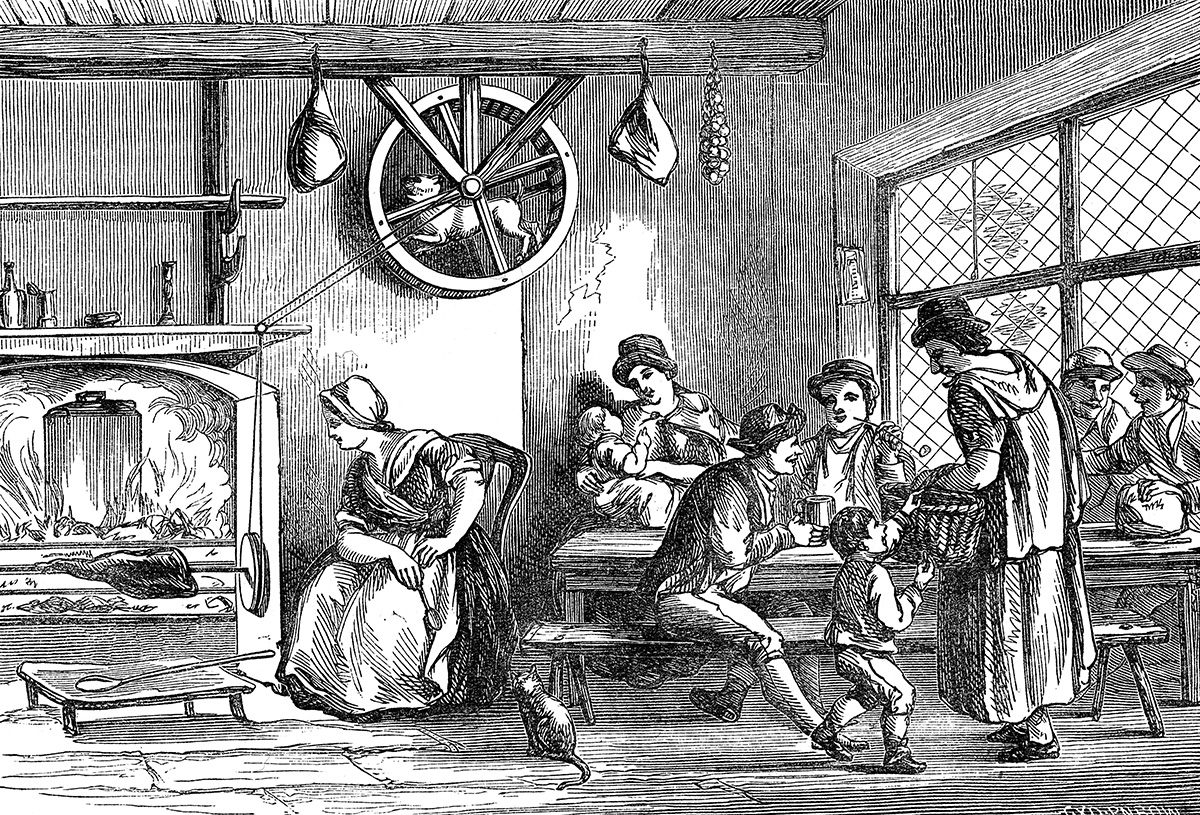 A turnspit dog at work in the inn at Newcastle, Carmarthen, Wales, c. 1800. Hulton Archive/Getty Images

For hundreds of years the now-extinct turnspit dog, also called Canis Vertigus (“dizzy dog”), vernepator cur, kitchen dog and turn-tyke, was specially bred just to turn a roasting mechanism for meat. And weirdly, this animal was a high-tech fixture for the professional and home cook from the 16th century until the mid-1800s.

Edward Jessy included the turnspit dog in his 19th-century book Anecdotes of Dogs, and he remembered it well from his youth. “They were long-bodied, crooked-legged, and ugly dogs, with a suspicious, unhappy look about them, as if they were weary of the task they had to do, and expected every moment to be seized upon to perform it,” he reminisced.

Turnspit dogs came in a variety of colors and were heavy-set, often with heterochromatic eyes. They were short enough to fit into a wooden wheel contraption that was connected to ropes or chains, which turned the giant turkey or ham on a spit for the master of the house.

It seems weird to bring an animal into the cooking process, let alone create a breed to fit a piece of kitchen equipment. But when the turnspit dog was first documented in the 15th century, cooks were desperate to relieve themselves of what was smoky, sweaty, tiring work. Large and royal houses in particular tended to impress guests with elaborate feasts of multiple types of game. Hunks of meat were either boiled or roasted over an open fire; the latter was not only considered most delicious, but in the UK, a hallmark of proper cooking.

Unfortunately, fire was tricky to control—you couldn’t leave, say, a goose on the flame without risking an unevenly cooked dinner. To cook meat thoroughly, kitchen staff stabbed each piece with the heavy iron spike of a roasting spit, which rotated via a looped chain and hand crank. The cook or the “spit boy” turned this contraption for long, hot hours by the flame. When an invention to ease the process materialized, every well-attended kitchen saw it as a must.

As you might imagine, turnspit dogs had a difficult lot in life as far as working dogs go. According to Stephen Coren in his book The Pawprints of History, the lucky ones “worked in pairs, with one dog trading places with its mate every couple of hours.” Dry heat radiated from toothsome foods the dog could never quite reach, and turnspit dogs weren’t necessarily supplied with water on-shift. Coren adds that for the tired pups “that were considered lazy, the cook might put a hot coal into the wheel to make the dog move its feet more quickly.”

It’s uncertain exactly what breeds of dog the turnspit came from, but it is widely believed that the Welsh Corgi and various terriers were involved. Charles Darwin pointed to turnspits as an instance of genetic engineering, and by the 1600s, the turnspit dog industry brought them into many households, taking the hardest kitchen task out of the hands of humans.

Turnspit dogs weren’t confined to the kitchen; they also drove “fruit presses, butter churns, water pumps and grain mills,” says Coren, and one hopeful inventor even drafted a patent for a dog-powered sewing machine that never quite made it to production. In the United States, where the breed was more rare, they mainly worked cider mills and hotels. When they weren’t being used as a Flintstones-style living motor, their furry little bodies were brought with their owners to church, and used as foot warmers.

Despite their treatment, turnspit dogs were by many accounts clever animals, as dogs go. In The Illustrated Natural History, John George Wood writes that turnspit dogs “were quite able to appreciate the lapse of time, and, if not relieved from their toils at the proper hour, would leap out of the wheel without orders, and force their companions to take their place, and complete their portion of the daily toil.”

Turnspit dogs were highly specialized for their main task; their heavy weight gave them the power to turn a wheel of 30 pounds or more, and they were bred with the compulsion to move continuously. John Caius, who wrote Of Englishe Dogges in the 1500s, wrote that turnspit dogs “so diligently look to their business that no drudge nor scullion can do the feat more cunningly.”

If you’re getting ideas about fashioning your own dog-sized wheel, though, it’s unlikely to be as effective. Lucy Worsley, chief curator at the Historic Royal Palaces in London and food historian Ivan Day attempted to coax a dog named Coco to power the spit roast at the George Inn on the BBC series History of the Home, to no avail. These dogs were wildly popular despite some predictable drawbacks; Worsley cites that one 18th-century turnspit owner complained of their dog “getting in the way of the fire” and “doing his business all over the kitchen.”

Some humans loved their turnspit dogs; Queen Victoria kept three as housepets, rather than kitchen tools. Some wrote narratives about them; an 1864 poem review from The Book of Days describes a turnspit dog called Fuddle who is so angry at his servitude he complains to his brethren about the evil cook over a pile of savory, hard-earned bones. The “stood in awe of whip and bell;” but when the cook enters the room and pets her dogs, Fuddle has a change of heart:

He licked his lips, and wagged his tail,
Was overjoyed he should prevail
Such favour to obtain.
Among the rest he went to play,
Was put into the wheel next day,
He turned and ate as well as they,
And never speeched again.

The short, chubby, depressed cooking dog couldn’t escape her task for hundreds of years, but by the turn of the 20th century, animal rights activist groups made people question the decision to use a living, suffering dog as a kitchen gadget in the home. According to food historian William Woys Weaver, the treatment of Turnspit Dogs in an 1850s Manhattan hotel so angered activist Henry Berg that it inspired him to found the ASPCA.

In Dogs, H.D. Richardson writes that “Fortunately for humanity, mechanical contrivances have, in these countries at least, superseded the necessity of thus torturing a poor dog.” The clock jack, a weighted pulley that turned meat automatically, became the new high-tech spit-turning tool of choice, and as gas ranges overshadowed the open-fire cooking method completely, the Turnspit Dog drifted fully out of use and breeding programs.

Genetics don’t disappear that quickly, of course; Richardson also noted that a Welsh dog called the “bowsy terrier” resembled a possible terrier/turnspit dog mix, so there might be some turnspit dog-descended canines out there yet. These days, however, the last pure turnspit dog, still fluffy and brown, currently rests in well-earned peace at Abergavenny Museum in Wales, as a taxidermy exhibit.

And helped launch a corporation now worth more than $40 billion.
animals

The birth of the Milk-Bone happened pretty much on a whim.
animals