Back When Your Thanksgiving Dinner Walked Hundreds of Miles to Market - Gastro Obscura
Want to see fewer ads? Become a Member. 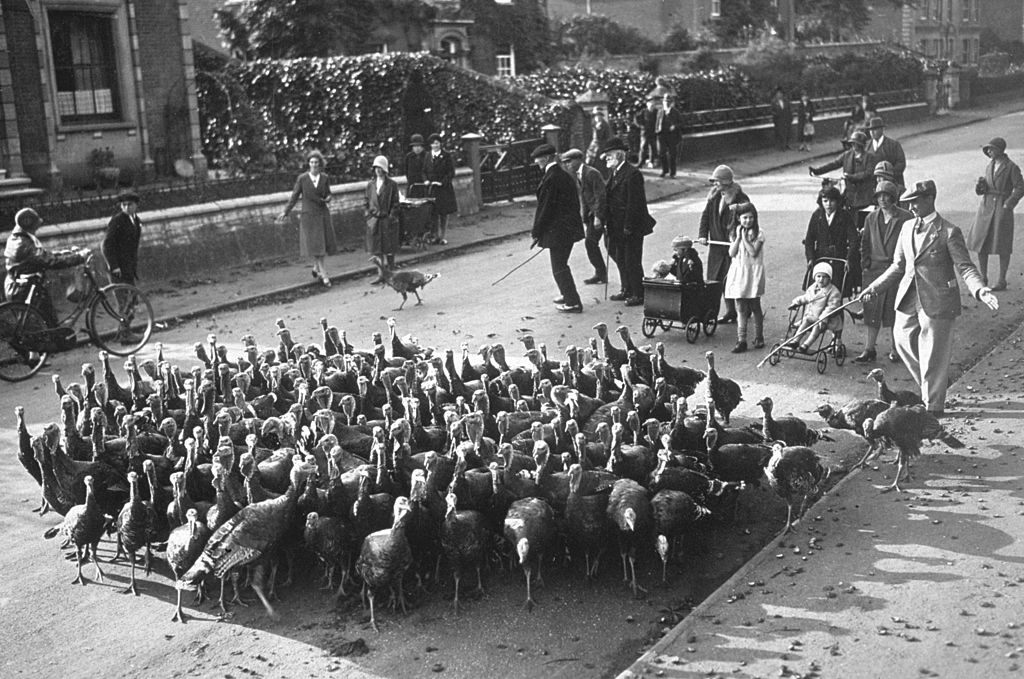 A farmer drives his flock of turkeys down a Norfolk road to market, c. 1931. Hulton Archive/Getty Images

Let’s take a trip back in time to Norfolk, England, to witness a scene of bygone rusticity: An English farmer, dressed in a tweed coat, tie, and vest, topped off with a jaunty pageboy cap, herds his flock through the streets. It’s a welcome break from the average day in 1931, and mothers follow behind pushing kids in prams; a little girl clutches her hands in excitement. The livestock gobbles and wobbles.

The farmer is driving a herd of turkeys through town.

When we think back on livestock migrations, we typically think of cattle, maybe sheep. The image of a rugged herdsman driving a clucking, head-bobbing, beady-eyed gaggle of birds across open plains and down dirt roads is harder to imagine, yet this practice used to be common all over the world. In the 17th century, before the introduction of trucks and refrigerated railway cars, a turkey drive was the only way to get poultry from farm to market. Such drives were no trivial matter, either: Birds by the thousands were sometimes driven hundreds of miles over several days; foxes and other predators would thin the herd along the way. In some parts of the world, such drives lasted into the 1930s.

The turkey trip from farms in rural Norfolk county to the livestock market in London, more than 100 miles away, was a regular one. In her book The Agricultural Revolution in Norfolk, author Naomi Riches writes that around “one hundred and fifty thousand turkeys were driven annually from Norfolk and Suffolk down the Ipswich Road to London.” Once they arrived, the turkeys were sold at market to stores and individual buyers.

In his 1724 travelogue A Tour Thro’ the Whole Island of Great Britain, Daniel Defoe (most famous for authoring Robinson Crusoe) recorded that turkeys and geese were driven to London from August to October, when the roads grew “too stiff and deep or their broad feet and short leggs [sic] to march in.” (To protect their feet, some lucky turkeys wore leather booties. Less lucky ones had their feet dipped in tar.)

Even at this time, there were a few farmers trying to engineer their way out of onerous treks. Some birds were conveyed in special carts with “four stories or stages, to put the creatures in one above another, by which invention one cart will carry a great number,” according to Defoe. Despite this mobile poultry condominium, most turkeys—who walk more than they fly— in the world were still herded the old-fashioned way.

In the United States, it was not unusual to see a clucking herd of turkeys driven through the streets and backcountry, but this doesn’t mean the task was simple. In his book The Turkey: An American Story, food historian Andrew F. Smith describes the frequent trips turkeys took between Lancaster and Philadelphia, occasionally trampling themselves to death on the 70-mile journey. Turkey drives could include “shooers” who herded the turkeys, children who scattered feed in the path to guide the birds, and covered wagons filled with grain to feed them.

In some cases the journeys were epic. One drive took birds from Ohio to Missouri, another from Iowa to Denver. The nature of turkeys also presented unique challenges: Dusk prompted the birds to seek higher ground and roost, effectively ending the day’s march.

“Wherever they are when the sun sets, that’s where they perch for the night,” Peter Gilbert, chair of the Vermont Humanities Council told Vermont Public Radio. “And their collective weight shatters trees; occasionally birds end up perching on a farmer’s shed or barn and the building collapses. In fact, in one town, they roosted on top of the school building and the school collapsed.”

Sometimes the turkeys would mistake the shade cast by a covered bridge for nighttime and react accordingly, requiring their drivers to roust them from the structure.

Despite such calamities, turkeys were strangely suited to the trip. “The bird’s amiability, vigorous constitution, and long, strong legs made these drives possible,” writes Karen Davies in More Than a Meal: The Turkey in History, Myth, Ritual, and Reality. Wild turkeys, whose blood ran in the veins of domesticated varieties, were known to run at speeds of up to 25 miles per hour, and could climb mountainsides, cross streams, and fly over lakes and rivers up to a mile wide.

As more efficient transportation options and better roads arrived, turkey drives waned, although some persisted into the 1930s. Their rarity in the early 20th century made them a tourist draw in places like Cuero, Texas, where they were common until 1917. “Growers around Cuero drove their turkeys in flocks of five to ten thousand up to thirty miles, from their farms to turkey-processing plants in town,” writes Smith in The Turkey: An American Story.

Crowds descended on the town to witness the novelty. Around the same time, a dance craze called the “turkey trot” was sweeping the nation. The shrewd townsfolk of Cuero decided to capitalize on the trend, hosting a drive just for tourists. They called it the “Turkey Trot” and drew a crowd of 30,000. The event inspired imitators, and a version of the Turkey Trot, called Turkeyfest, still takes place today, sans turkey drive. Now it’s common for humans to do the running in “turkey trot” races around the country.

Hardly fodder for rustic reminiscing or high frontier fantasy, the legacy of turkey drives has been largely forgotten, although they get the occasional cultural nod. There was the 1991 play put on by the Trinity County, California, theater troupe Dell’Arte, “The Truly Remarkable Turkey Drive of 1912” (based on a true story). Parents who want to share the wonder of turkey drives with their kids can pick up a copy of Kathleen Karr’s The Great Turkey Walk, a fictional account of a drive from Missouri to Denver. But most folks will tuck into this season’s bird with little appreciation for how far these creatures once walked, just to end up on a platter.

Add a Surrealist Touch to Your Thanksgiving With These Dali Recipes

The bland appeal of the Broad Breasted White.
animals

Americans’ appetite for the bird had unintended consequences.
medieval

With only nine master fishermen left, a centuries-old tradition is at risk.
Video

In 1863, a woman buried her hard-drinking husband beneath his beloved booze.
Want to see fewer ads? Become a Member.
From Around the Web
THE GASTRO OBSCURA BOOK
Taste the World!
An eye-opening journey through the history, culture, and places of the culinary world. Order Now