The Father and Son Who Ate Every Animal Possible - Gastro Obscura
Want to see fewer ads? Become a Member. 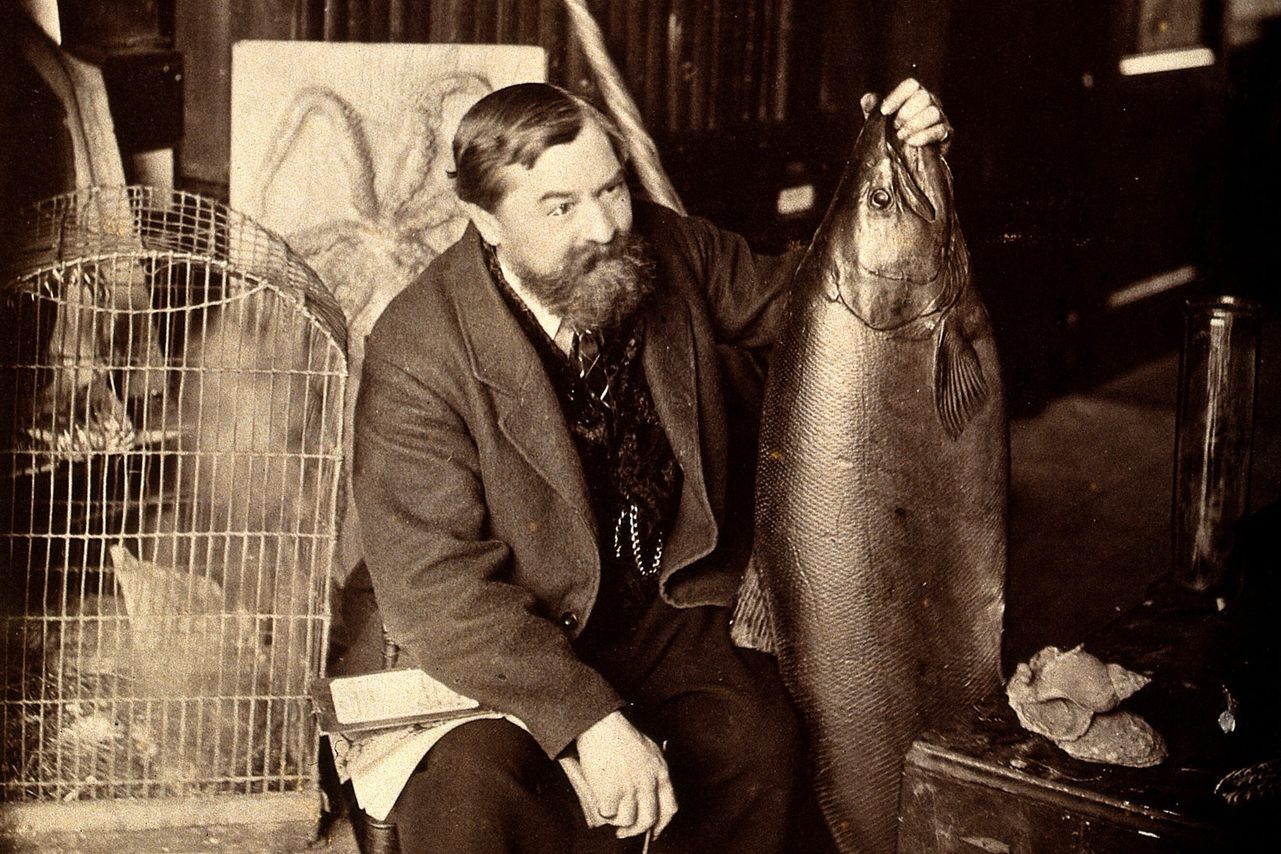 Francis Buckland and a fish. Wellcome Library, London/CC BY 4.0

The year is 1813. You’re an undergraduate at the University of Oxford, enrolled in a course on the science of geology. The teacher, a man clad in long black robes and grasping a large hyena skull, rushes toward you and bellows, “What rules the world?” You have no clue what this man wants you to say. You draw back in your chair, eyes wide, and squeak out, “Haven’t an idea.” The lecturer rears back and shouts: “The stomach rules the world! The great ones eat the less, and the less the lesser still.”

The teacher is William Buckland, a man whose passion for geology and paleontology was matched only by the voracity of his stomach. As eccentric as his character was—complemented by a blue pouch at his side stuffed with mammoth teeth and skin, petrified feces and that hyena skull—what passed his lips was much more bizarre.

William entertained guests at his home and the college with exotic meals of things like hedgehogs, roast ostrich, porpoise, crocodile steaks and even cooked puppies. His son, Francis, had an equally egalitarian palate. Together, they viewed Noah’s Ark as a dinner menu.

It’s unclear exactly why William embraced such a curious diet. Most likely it was a combination of fame and curiosity. His father was educated, but their family lived modestly. Through luck and hard work, he entered Corpus Christi College, a small but prestigious branch of Oxford. While a young professor at Oxford, he was hard-pressed for money so he amped up his eccentricities in lectures to attract fee-paying students with racy jokes and profanity.

There appears to be no clear incident or time period when William started taking a fork and knife through the animal kingdom, but it could have been his doubling-down on eccentric behavior for widespread notoriety. Patrick John Boylan, a geologist who wrote his doctoral thesis on William in 1984, said as much: “Buckland progressed from a relatively modest middle class provincial background … by means of his extraordinary hard work, innate intelligence and ability, and considerable charm (of which his well documented eccentricities were an integral, and probably deliberately contrived at times, part).”

William had a fondness for mice served on toast. The common mole held the crowning achievement of the vilest dish he had eaten until he chewed on the bluebottle fly. His house was stuffed to the brim with bones and fossils and bustled with pets like guinea pigs, at least one pony, snakes, frogs, ferrets, hawks, owls, cats, dogs and a pet hyena named Billy. Outside, the children liked to stand on a large pet tortoise while foxes and chickens ran about.

When Buckland was visiting an Italian cathedra some time between 1826 and 1836, a priest told him the slick floor was due to the miraculously ever-flowing blood of sacrificed martyrs; he knelt, ran his tongue across the ground, and declared the liquid to be bat urine. Most notably, William allegedly ingested the 140ish-year-old mummified heart belonging to King Louis XIV of France. The heart had been stolen during the French Revolution until William’s friend, Lord Harcourt, somehow acquired it. When Harcourt withdrew the heart from a silver snuffbox, William quickly popped it in his mouth. Whether trying to determine its geological origin (perhaps he thought it was a stone), or whether he wanted another notch on his apron (most sources seem to agree with that theory), he gobbled it up. The most well-known tale says William announced “I have eaten many strange things, but have never eaten the heart of a king before” before poor King Louis’ heart dropped to Buckland’s stomach.

No matter his outlandish behavior, William was and remains a respected scientist in his field—he excavated one of the oldest human remains ever found, pioneered the modern sciences of geology and paleontology and became Dean of Westminster Abbey. Not everyone liked his eccentricities—Charles Darwin called him a “vulgar and almost coarse man” driven more by notoriety than his love of science.

William’s son, Francis Trevelyan Buckland, was born in 1826. Like his father, Francis was a committed zoophagist—an indiscriminate eater of animals in what must be the most literal interpretation of Genesis 9:3: “Every moving thing that lives shall be food for you.“ In fact, Francis probably ate a number of more strange things than his father (albeit not the heart of a king).

Francis was a short man with a consistently disheveled appearance, but was jovial and popular, with a childlike view of the world. It’s little wonder why Francis developed his eccentricities. Take this account from Francis’ own diary when he was just seven years old:

“A live turtle was sent down from London.... My father tied a long rope round the turtle’s fin, and let him have a swim in ‘Mercury,’ the ornamental water in the middle of the Christ Church Quad, while I held the string. I recollect, too, that my father made me stand on the back of the turtle while he held me on (I was then a little fellow), and I had a ride for a few yards as it swam round and round the pond. As a treat I was allowed to assist the cook to cut off the turtle’s head in the college kitchen. The head, after it was separated, nipped the finger of one of the kitchen boys who was opening the beast’s mouth. This same head is now in my museum.”

Eating was one of the first things that landed Francis in trouble. According to William, when his son was two-and-a-half years old, he ate the end of a candle. As punishment, William shoved him inside the thorny furze bush for 10 minutes. He probably would have avoided punishment if it were a stray field mouse.

Like his father, Francis went into the sciences and studied at Oxford. He pursued paths of zoology and naturalism but trained as a surgeon, trading  fish for human corpse parts to further his studies. Although he wasn’t a great student and strayed from his medical path as time went on. In his day he was best known for his writings; he travelled extensively and wrote popular articles about the world’s natural curiosities in a more casual tone that differed from the stuffy literature dominating Victorian Britain.

Growing up in a house of exotic pets, it’s no wonder that Francis began his own menagerie at college. Before entering his chamber, first you might smell a rotten odor. Opening the door, you would see “an eagle, a jackal, besides marmots, guinea-pigs, squirrels and dormice, an adder and many harmless snakes and slow-worms, tortoises, green frogs, and a chameleon. Skeletons and stuffed specimens were numerous…” Oh and that smell? It wasn’t only from his tiny zoo. Francis had been dissecting a cat and kept the corpse in a box under his bed.

His most notorious companion was a bear cub named Tig, whom Francis dressed in a cap and gown appropriate for the Christ Church College at Oxford. The bear attended wine parties, performed tricks, liked to suck fingers, and roamed the streets for candy when left unattended. Sometimes Francis took rats and de-fanged snakes from his coat at parties to further the entertainment. Francis owned several monkeys throughout his life. Two of them, Jacko and Jenny, he served port every Sunday and beer during the week. When Jacko died, he turned his hide into a tablecloth as an act of memoriam.

Whether at home or elsewhere, guests were served steaming plates of boiled elephant trunk, boiled and fried meat taken from the head of a porpoise, roasted giraffe necks and rhinoceros pie. Boa constrictor, sea slugs and ear wigs made their way to his stomach, although he ended up hating those last two. When he heard a panther had recently died at a zoo, he had the curator dig up the corpse and send over some panther chops (“It was not very good.”)

Not all of this was done just for the palate. While much of Francis’ omnivorous nature stemmed from simply wanting to know what the animal kingdom tasted like, there was a scientific reasoning behind other meals. In 1860, he founded the Acclimation Society of Britain; its goal was to find and introduce exotic fauna to the country in order to gain another food source. Their dinners included things like Syrian pig, sheep from China, curassow and other animals from across the globe. Because of their population, Francis advocated for horse meat, but it tasted awful. He suggested it be served to prisoners instead.

While the Acclimation Society was fruitless and Francis never achieved the level of prestige his father reached, his advocacy and research calling for responsible fishing and fish farming helped prevent Britain from overfishing. His good nature and love of life translated to his writing and his lecturers were well-attended. He was more a popularizer of science—something of a Neil deGrasse Tyson—than a hardcore academic. When he died at just 54, papers around the country wrote mournful memorials praising him. Unfortunately, history has mostly forgotten him until very recently. A British author just wrote a book about this obscure oddball of the Victorian age—maybe the Bucklands can still inspire a whole new generation of omnivores.

Found: A Medieval Horse Head Hidden in the Colosseum

Brown Windsor soup was reportedly a favorite of the Queen. The only problem? It may not have existed.
victorian

Snapdragon is not for the faint-hearted.
victorian

Nothing like getting surprise hate mail from a would-be lover on February 14.
victorian

To stave off boredom, some people donned sheets and menaced the public.
Video • Wonder From Home

This vintage train once gave new meaning to “swimming upstream.”
Want to see fewer ads? Become a Member.
From Around the Web
THE GASTRO OBSCURA BOOK
Taste the World!
An eye-opening journey through the history, culture, and places of the culinary world. Order Now