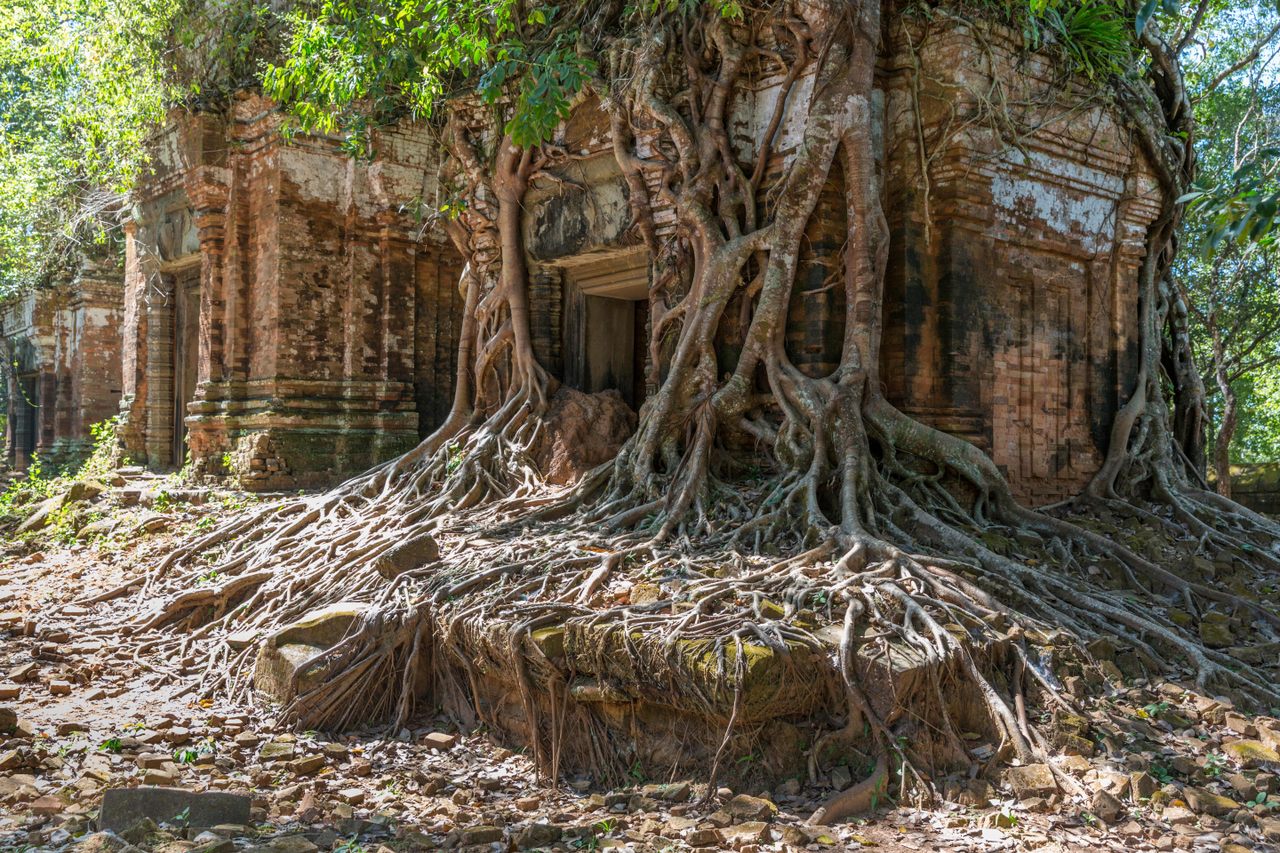 A Khmer temple at Koh Ker. Arthur Greenberg/Alamy
In This Story
Destination Guide

If you visit the remote ruins of Koh Ker today, you might have the ancient Cambodian city to yourself, at least if you wake up before sunrise to beat day-trippers from Siem Reap. From atop the main attraction, a seven-tiered pyramid temple called Prasat Thom, you’ll be able to see dozens more monuments—stone buildings, with inscriptions and intricate carvings that are overgrown with vegetation and, in a few cases, hacked off by looters. Some are best observed from this distance, since the area hasn’t been entirely cleared of land mines from the Khmer Rouge period of the 1970s.

Back in 942 A.D., Prasat Thom was brand new, and probably the tallest building you’d see in your lifetime. It would have been directly in front of you as you approached the city on the main access road. To your right would be water; the wide road was built on top of a four-mile-long embankment, which wrangled the Rongea River into the largest artificial lake in the kingdom. You might have stopped to pay your respects at a roadside temple on the left, Prasat Boeng Voeng, one of the many shrines spread across 13 square miles. If you arrived during the rainy season, you might have paused on a bridge, wide and sturdy enough for the king’s elephants, to watch excess water from this reservoir flow over a curved spillway. And as you approached the main temple, you might have rubbed shoulders with artists, dancers, sculptors, scholars, and other newcomers who had doubled Koh Ker’s population in just a few years.

Angkor—the famed, sprawling city 60 miles away—was the seat of authority for the Khmer Empire for more than 600 years, from the ninth to 15th centuries, except for a 17-year interval (928–944), when political power and courtly life shifted to Koh Ker. New archaeological evidence might explain why Koh Ker’s glory days were so brief: The new capital’s massive water-management system failed spectacularly soon after it was built.

Thick vegetation and unexploded land mines have made archaeological exploration in parts of Cambodia difficult in recent decades. But over the past 10 years or so, the remote-sensing technique known as lidar has opened new possibilities. A lidar scanner strapped to a helicopter or low-flying plane sends thousands of laser pulses at the ground to measure distance. Because some of those pulses reach the ground through the forest cover, lidar has had spectacular successes revealing otherwise hidden traces of canals, walls, and other structures all over the world, from 19th-century stone walls crisscrossing New England to ancient Maya temples in the forests of Mesoamerica.

Damian Evans, an archaeologist at the French Institute of Asian Studies in Paris, has been using lidar extensively in Cambodia to map ancient Khmer cities in unprecedented detail. His team’s maps of Koh Ker have revealed the long embankment—and a large breach in it. In a recent paper in the Journal of Archaeological Science: Reports, Evans and his colleagues took a closer look at this embankment to reconstruct its function and ultimate demise.

Archaeologists don’t know exactly why the Khmer capital moved to Koh Ker, but during the 10th century, it was geographically in the middle of the Khmer world, along an important ancient road connecting Angkor and Wat Phu, another city, in what is now modern-day Laos. Inscriptions indicate that by 921, Jayavarman IV, not yet the king of the Khmer Empire, established himself in the city, while his cousins held the throne in Angkor. Perhaps after some power struggle, Jayavarman IV became king of the empire in 928. He stayed in Koh Ker and enacted an ambitious building program to anoint his new capital with dozens of monuments and temples, including Prasat Thom.

“It was a mega-project,” says Chen Chanratana, an archaeologist who conducts research Koh Ker and is head of the Khmer Heritage Foundation, but was not directly involved in the new lidar study.

“Based on the inscriptions, you would think that there was absolutely no one at Koh Ker before, and Jayavarman built this city out of nowhere,” says archaeologist Sarah Klassen, a coauthor of the study from Arizona State University, who just completed her doctorate on ancient water management systems.* The archaeological record, however, suggests that between 20,000 and 30,000 people lived in the city before its rise and after its decline—but when Jayavarman IV’s royal court came to town, the population swelled by about 10,000 to 20,000 people.

Jayavarman IV’s building plan included the four-mile embankment, which created a 30-foot-deep reservoir. Chanratana says Koh Ker is in a flood zone, so these structures probably protected the city from a natural cycle of inundation. But the embankment had a fatal engineering flaw: There were just two, relatively small outlets for excess water during the rainy season, a narrow chute and a main spillway. (Because these outlets were most likely uncontrolled, the embankment was technically a weir, as opposed to a dam, which has controlled outlets for excess water.)

“The capacity of the chute and the spillway combined was not enough to pass the water in the peak of the rainy season,” says Terry Lustig, the lead author of the new study and an engineer who has studied ancient water systems at the University of Sydney.

The embankment was probably overtopped a few times during rainy seasons, but not catastrophically, and there is some evidence that repairs were underway to make it taller. However, those improvements were too little, too late. Within a decade of its construction, a particularly strong monsoon spelled the reservoir’s demise.

In an event that lasted probably just two hours, the lake’s main spillway failed in “spectacular fashion,” says Klassen. You would not have wanted to be downstream. Torrents of water carved holes in the spillway and even carried a few heavy stone blocks more than 1,500 feet. The river sliced a new course through the embankment, which you can still see today where the ancient weir meets the banks of the Rongea, Lustig says. “It’s like a knife has gone through it,” he says.

The rerouted river, now flowing north instead of its old eastward heading, also cut off the main road that connected Koh Ker with Angkor and Wat Phu. Once an embankment breaches, “it’s really difficult to reconstruct it and fix it,” Klassen says. Today the breach, through with the river flows, stretches more than 300 feet across , and cuts about 25 feet deep into the embankment. Partially drained, the lake’s practical and aesthetic benefits were lost. Chanratana says that inscriptions through the 13th century indicate that later kings visited Koh Ker, and remarked that entrance road still needed to be repaired. “For 200, 300 years, they still could not solve the problem of restoration,” he says.

Because the royal court went back to Angkor soon after Jayavarman IV’s death, some scholars have speculated that the king was a usurper, and Koh Ker’s growth the hubristic experiment of an illegitimate ruler. But the new evidence suggests infrastructure rather than insurrection as the reason for the court’s return to its traditional seat. The repairs might have been proven too daunting for Jayavarman’s successors, perhaps adding to existing political pressure move back to Angkor. “We have to be tentative because we don’t know what was in their minds,” Lustig says. “But losing such a massive amount water would not really be good karma.”

To some, this Brazilian neighborhood was a tropical Venice. To others, it was a slum on the water.
animals

These ecosystem engineers have a good track record in helping restore wetlands.
floods

How Do You Keep a Subway From Flooding in the Age of Rising Seas?

You seal it up, but you have to test it first.
Video • PinDrop