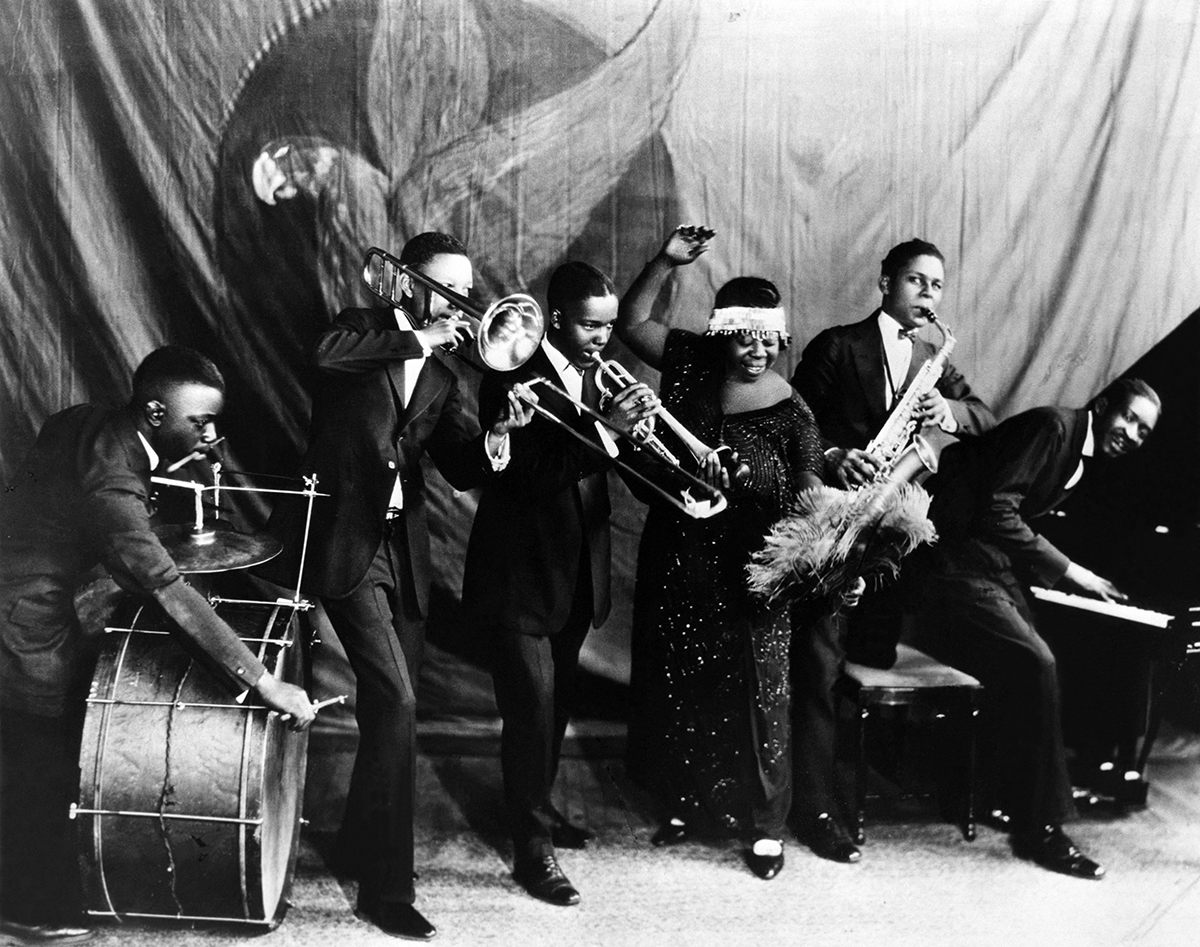 Ma Rainey poses for a studio group shot with her Georgia Jazz Band in 1924 or 1925. JP Jazz Archive/Redferns/Getty Images

In the 1910s and ’20s, long before Prince and Beyonce fascinated generations, America vested its quick-changing emotions in The Mother of the Blues—a gender-role-flouting singer with sky-high charisma, great business sense, and a voice that could bring people from laughter to tears and back again.

Before Ma Rainey was the Mother of the Blues, she was a young musician named Gertrude Pridgett. Born in Columbus, Georgia on April 26, 1886, Pridgett was a traveling performer by the age of 14, singing cabaret in talent and tent shows around the South. According to Sandra Lieb’s Mother of the Blues: A Study of Ma Rainey, Rainey first encountered the blues at one of these shows, when a fellow performer stood up and began singing a “strange and poignant” song about a man who had left her. Rainey was so captivated, she learned it that day, and began using it as an encore in her own act.

Rainey loved the blues so much and so immediately, she claims to have invented the genre’s name in “a moment of inspiration”—though Lieb points out that this is unlikely, as the term was in use long before then. What is certain is that she quickly made it her own. A few years into her career, she married William “Pa” Rainey, a traveling entertainer who specialized in comedy and vaudeville. The two traveled with a variety of troupes, including the Smarter Set, the Rabbit Foot Minstrels, and Tolliver’s Circus and Musical Extravaganza, which billed the couple as “Rainey and Rainey, Assassinators of the Blues.” As Rainey’s star rose, she began headlining solo acts, under the name “Madame Gertrude Rainey”—“Ma” for short.

Like most shows that traveled the South in the 1910s, Rainey’s generally followed the harvest from city to city, and brought celebration-minded audiences a little bit of everything. A typical program might include chorus lines, contortionists, acrobats, and comedy skits (one popular act featured trained chickens that would “fly all over the stage,” Lieb writes). When Rainey finally appeared to end the night—often decked out in a gold gown, a diamond tiara, rings for every finger, and a necklace made out of $20 pieces, carrying an ostrich plume in one hand and a gun in the other, and smiling a gold-capped smile—she uniformly brought down the house.

“By all accounts, she electrified her audience,” writes Lieb. Poets wrote odes to her—Sterling Brown’s “Ma Rainey” describes fans pouring in “from anyplace/Miles around,” to hear Ma “do her stuff,” laughing at her jokes and weeping at her songs. “She would moan, and the audience would moan with her,” Brown later recalled. She would always end with “See See Rider,” a surefire showstopper, stay on for the inevitable encore, and then bring down the house with a massive finale, featuring dancing from the night’s entire cast. White people sometimes hired her to play quieter parties—but after she finished “she would go to a dance at the local black cafe behind a gas station, to entertain and socialize with her own people,” remembers Sam Chatmon, one of her guitarists.

Starting in 1923, Rainey translated her live reputation into a series of massive hits for Paramount Records. Over the next five years, she released nearly 100 singles for the outlet, including now-classics like “Bo-Weavil Blues,” “Dead Drunk Blues,” and “Don’t Fish in My Sea.” She racked up even more fans, moving enough units that some credit her with single-handedly saving the label.

Due partly to limited recording technologies, and partly to Rainey’s uncontainable stage presence, the records don’t begin to capture her impact—but Rainey played even this to her advantage. For the first show of her 1924 Northern tour, at the Grand Theater in her home base city of Chicago, the curtains opened to reveal an oversized gramophone playing her “Moonshine Blues.” When Rainey stepped onstage and began to sing, blasting the recording out of the water, the crowd lost it. That night, she got seven curtain calls.

Rainey’s themes and lyrics were as innovative as her methods. Although Rainey’s songs are full of infidelity, abandonment, and heartbreak—she sang the blues, after all—their protagonists are more likely to brandish a pistol or to cheat right back than to hang their heads and cry. As Angela Davis points out in 2011’s Blues Legacies and Black Feminism, Rainey’s songs are full of women who “explicitly celebrate their right to conduct themselves as expansively and even as undesirably as men,” drinking, carousing, even baiting law enforcement. In “Blues the World Forgot, Part II” an anonymous male interlocutor warns Rainey that there’s a policeman standing on the corner. In response, she hams it up over a jaunty trumpet: “Tell the sergeant I said come on in, and bring all the corn mash he has with him!”

Rainey also didn’t let the law drive her away from other then-taboo modes of self-expression. As Robert Philipson details in his 2011 documentary T’Ain’t Nobody’s Bizness: Queer Blues Divas of the 1920s, Rainey was one of a number of jazz-age blues musicians who modern audiences might describe as queer.

Rainey’s sexuality wasn’t public knowledge, but she didn’t try too hard to hide it, either. “I believe she was courtin’ Bessie [Smith], the way they’d talk,” Chatmon remembered of Rainey’s collaborator and protege, another pioneering blues singer and herself romantically linked to Lillian Simpson, a girl in her chorus. Others of Rainey’s peers—the tux-rocking, piano-slaying Gladys Bentley, for example—were even more openly queer. Because it was edgy already, “the blues was the area where alternative sexuality was most visible,” says Philipson.

It was this that eventually did bring the sergeant knocking, after a 1925 party that got too rowdy. As Chris Albertson writes in a biography of Smith,”[Rainey] and a group of young ladies had been drinking and were making so much noise that a neighbor summoned the police,” who arrived “just as the impromptu party got intimate.” Everyone but Rainey fled through the back door, and she was arrested for “running an indecent party.” Smith bailed her out the next morning.

Fans speculate this incident might have inspired “Prove It On Me Blues,” a 1928 song that, had it been released in 2008, would have still turned heads. “Went out last night with a crowd of my friends,” Rainey sings over a strutting beat. “They must’ve been women, ‘cause I don’t like no men. It’s true I wear a collar and tie, Makes the wind blow all the while.”

Paramount’s ad for the song featured a drawing of Rainey in a three-piece suit and a fedora, chatting up some ladies while a policeman watches from across the street. (“What’s all this? Scandal?” the ad copy asked. “Don’t fail to get this record from your dealer!”) The song was “basically an explicitly lesbian anthem of celebration,” says Philipson. “You didn’t see that anywhere else.” In a 1997 paper, Jack Halberstam points out that the accompanying illustration “also suggests the popularity and even relative acceptability of a particular form of lesbian drag.”

That year, 1928, also marked Rainey’s last year of recording music. Times and styles were changing, and Paramount ended her contract. After a few more years spent touring, Rainey settled back down in her birthplace of Columbus, where she opened a couple of profitable movie theaters. She died in 1939.

These days, it’s difficult to recreate the experience of listening to Rainey. Her Paramount recordings are notoriously tinny and hollow-sounding, especially when compared to the rapturous descriptions of her performances. But her legacy remains engraved in the popular consciousness. Besides the bureaucratic tributes—a postage stamp, a spot in the Rock & Roll Hall of Fame—Rainey is constant invoked, both explicitly and implicitly, by other artists. Six months after Rainey’s death, Memphis Minnie recorded the first Ma tribute song. August Wilson wrote a play about her. In Langston Hughes’s “The Blues,” the character Simple imbues her with timelessness: “I will not deny Ma Rainey, even to hide my age. Yes I heard her! I am proud of hearing her! To tell the truth, if I stop and listen, I can still hear her.”

Decades later, contemporary musicians—who rock tuxes, who invite scandal on their own terms, who explore heartbreak with their heads held high—still hear her, too.

Meet Ann Gregory, Who Shattered Racist and Sexist Barriers in the Golf World

An unheralded sports pioneer, she was known as "The Queen of Negro Women’s Golf."
kickass women

She owned 27 Harleys and rode them all over the United States.
music

The 'Black Mozart' Was So Much More

Between composing concertos, Joseph Bologne fenced and fought in the army.
aviation

The fearless aviator was determined to fly.
Video