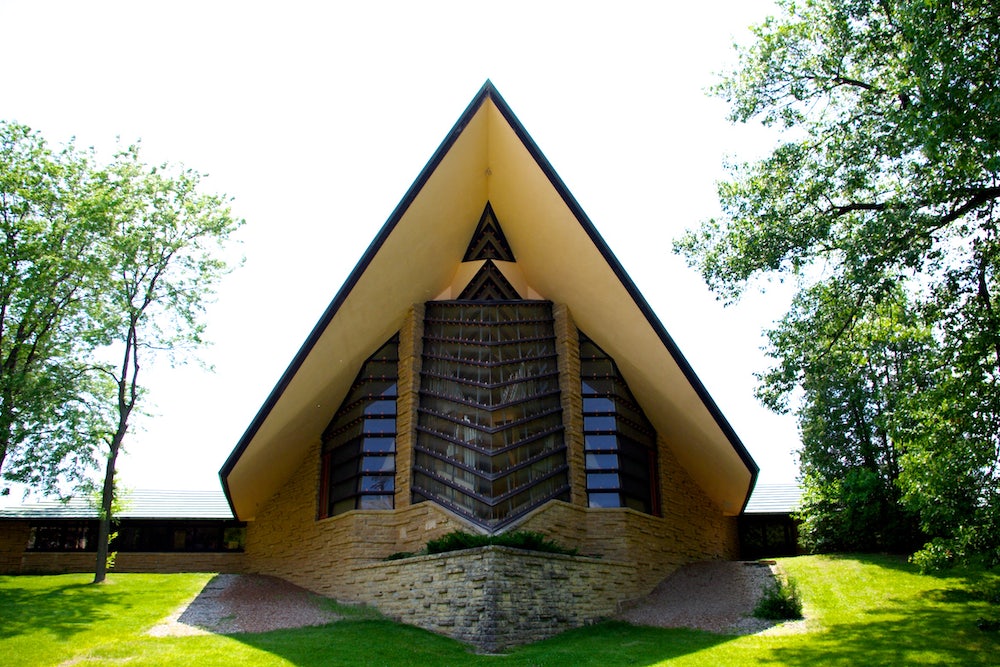 The prow of the First Unitarian Society Meeting House in Madison WI, designed by Frank Lloyd Wright.  (Nomadseifer / Wikimedia Commons)
“You Belong in PARK FOREST!” claims a 1952 advertisement for a brand new suburb 30 miles south of Chicago. “The moment you come to our town you know: You’re welcome. You’re part of a big group. You can live in a friendly small town instead of a lonely big city.” Park Forest was one of the first extensively planned postwar suburbs in America. Built for an increasingly mobile and growing middle class, by the late 1950s it housed 28,000 people, most of them families. As Gretchen Buggeln writes in her new book The Suburban Church: Modernism and Community in Postwar America, Park Forest’s developers made sure to set aside areas for churches in their new town, betting that “moral stability” would be a selling point.
Across the country throughout the ’50s and ’60s, countless churches popped up, and they didn’t take after the predominant styles of the day: Gothic revival or red-bricked, white-pillared colonial. The new churches were economical A-frames and simple, rectilinear buildings constructed with inexpensive, familiar materials such as brick, clay, stone, and solid wood, often in shades of tan or gray. These modestly modernist structures were often dismissed as “gas station” or “grocery store” churches, and criticized as ugly, derivative, and second-rate. One church leader jokingly referred to the burgeoning aesthetic in the midwest as “cow pasture architecture.”
But from the beginning, these new churches also caused genuine concern. Associated with the rise of postwar consumerism and a convenient, middle-class lifestyle, churches were sitting targets for intellectuals and religious leaders critical of what they saw as suburban complacency. According to Buggeln, “It was difficult for them to see how Christianity could remain vital in comfortable suburbs, seemingly at a cloistered remove from the ugly problems of the day.” Critics thought the adoption of experimental sanctuary shapes simply masked what was essentially still a conventional mode of worship. The theologian Paul Tillich called suburban Christianity “one of the greatest dangers for Protestantism.”

In terms of general utility and popularity, the most common church style in the suburban neighborhoods of the ’50s and early ’60s was probably the A-frame church, easily recognizable by its triangular frame, with a “steeply pitched roof that extends to the ground and doubles as side walls.” A-frame churches were popular among congregations with a limited budget. They allowed, Buggeln writes, “a modernism that retained formality and dignity.” Take Frank Lloyd Wright’s First Unitarian Society Meeting House, a famed A-frame in Madison, Wisconsin, which was made of simple wood and stone and featured a prominent prow. The architect Henry Kamphoefner described it enthusiastically: “the whole auditorium becomes the spire … This daring concept puts the steeple under the roof, and gives the whole structure a symbolic upward reaching.” The back of the sanctuary merged harmoniously with the social area, allowing for a more flexible use of space. (Perhaps tellingly, the other social arena in which A-frames were popular was leisure. By the mid-’60s, middle-class families could buy a kit and build themselves an A-frame vacation cabin.)

Today, Buggeln writes, “the tens of thousands of modern churches these congregations created are rendered almost invisible by their ubiquity.” Centering on the oeuvres of three architects working largely in the midwest—Edward Sövik, Edward Dart, and Charles Stade—she calls for a revised and more compassionate framework for a much maligned, easily denigrated cross-section of American culture: religion, suburbia, and the imperfect, intriguing influx of modernism into both. What results is a fascinating, if sometimes overly devoted, visual exploration of the making of suburban America’s faith-based institutions. Buggeln, who holds the Phyllis and Richard Duesenberg Chair in Christianity and the Arts at Valparaiso University, discusses the churches as physical signifiers of the needs and priorities of these communities, and excavates the soul-searching of American architects, who tried to discern the appropriate role—to comfort, to inspire, to unify?—of the church structure in a congregation.

The A-frame “seemed too common, too facile, a hasty solution to a more profound spiritual problem.”

Though Buggeln infuses her analysis with the opinions of churchgoers themselves, the architects are clearly the stars in this story, the ones coaxing reluctant or cautious congregations toward more experimental form. She notes that Edward Sövik “often wrote extensive explanatory notes for his buildings, teaching the congregation to see what he saw.” Edward Dart was a deft architect who tended to work on smaller churches with limited budgets; as a result, he often had to rely on the space-saving and inexpensive multipurpose basement, in lieu of separate educational or social wings. Stade, meanwhile, introduced the A-frame form for which he was best known to more conservative areas of the country, such as Atlanta, where his Lutheran Church of the Ascension was considered one of the earliest regional examples of contemporary church design.

But it was Sövik who was a particularly influential and articulate spokesperson for the suburban church movement. For example, while he admired Corbusier’s sculpturally impressive Chapel of Notre Dame du Haut in Ronchamp, France, he thought it too virtuosic to be used as a model for church architecture, writing, “It is too much Corbu’s church, not enough the church of God’s family.” He developed the concept of the “nonchurch,” in which flexible space enabled adaption to a community’s changing needs. Ideas such as these dovetailed with the desire that many churchgoers had to have their faith-based experiences mediated through structures that melded the secular with the spiritual.

What comes across most clearly in Buggeln’s text is the extent to which architects’ desires—a vigorous, empowered push to leave behind the trappings of the past and forge onward with cleaner lines and more humble materials—had to contend with the democratic will of congregations. The finished products were far from an individuated, inspired vision; rather, they are imperfectly borne of an amalgam of wishes, and (for those that remain standing) are still evolving to fit the needs of its constituents today. Overall it was, Buggeln contends, “a learning process with both theological and aesthetic dimensions.”

As the 1960s progressed, of course, the appeal of the unified and uniform community passed, and the notion of a religious practice so closely tied to the culture of the suburbs—at one point the movement’s strength—waned in popularity. The enthusiastic attempt to make religion relevant through modern design was also in some ways its downfall. The contemporary yet comfortable form of the A-frame, Buggeln writes, “seemed too common, too facile, a hasty solution to a more profound spiritual problem.”

Considering the eventual shift away from the suburban church movement, she notes that these modern churches “may have provided suburban worshippers with a refuge and respite from the outside world, but that does not necessarily mean that those congregations were turning their backs on that world.” But weren’t they? It’s this larger context that feels lacking. For instance, explaining her focus on white congregations in the midwest, she writes that these communities were “fraught with prejudices” and briefly notes that, yes, there were churches in the ’50s that engaged in blackface minstrel shows. Yet such passing mentions ultimately downplay the more insidious aspects of white, suburban life, and give her otherwise impressive compassion for these congregations a cloying tinge. Similarly, quick references to the fact that most suburbs were not (at least in practice) racially integrated—during decades that included the Brown v. Board of Education decision and an onslaught of white flight—feel too slight.

For instance, while Park Forest didn’t have legal race barriers, the Federal Housing Administration’s racial policy essentially guaranteed that black people were denied home mortgages, making integration in the suburbs effectively impossible. Buggeln acknowledges this in a parenthesis, but stops short of more broadly connecting the homogenous culture of the suburbs—in relation to which these churches defined themselves—to governmental policy. The composition of the suburbs was engineered and yet, in the discourse about making religion relevant, there isn’t enough probing of who, exactly, was even around for the discussion.

The Suburban Church is at its best when its author’s conviction for her subject matter is clearly communicated. Buggeln is pushing for more nuanced recognition of a period in architecture and American culture that feels rather like a time capsule, but there’s value in her documentation, especially as many of those involved in building the churches have passed away. And it’s no small compliment to say that her enthusiasm for the individuals in this movement is winning. It’s when her smart analysis bumps up against a larger, more discomfiting sociopolitical frame that she hesitates, and that’s a shame. Her book asks us for generosity in reconsidering the legacy of suburban church architecture, but I wish it had accorded as much generosity to the wider social context that helped give rise to those places of worship.

Welcome to No One’s Watching Week, the time of the year when the readers are away and your tireless editors have run amok. For this week only, Atlas Obscura, New Republic, Popular Mechanics, Pacific Standard, The Paris Review, and Mental Floss will be swapping content that is too ​out there​ for any other week in 2015. This article originally appeared in New Republic.

Fleeting Wonders: Shredding the Worst of 2015 in Times Square

The stonemasons of the Freiburg Minster in southern Germany go to great lengths—and heights.
churches

At the Church of 8 Wheels, Roller-Skating Fans' Prayers Have Been Answered

This former house of worship in San Francisco is now a hotspot for skaters of all ages.
Video • PinDrop