This Artist Used Over 6,500 Scents To Recreate The Smell Of 35 World Cities - Atlas Obscura
Want to see fewer ads? Become a Member. 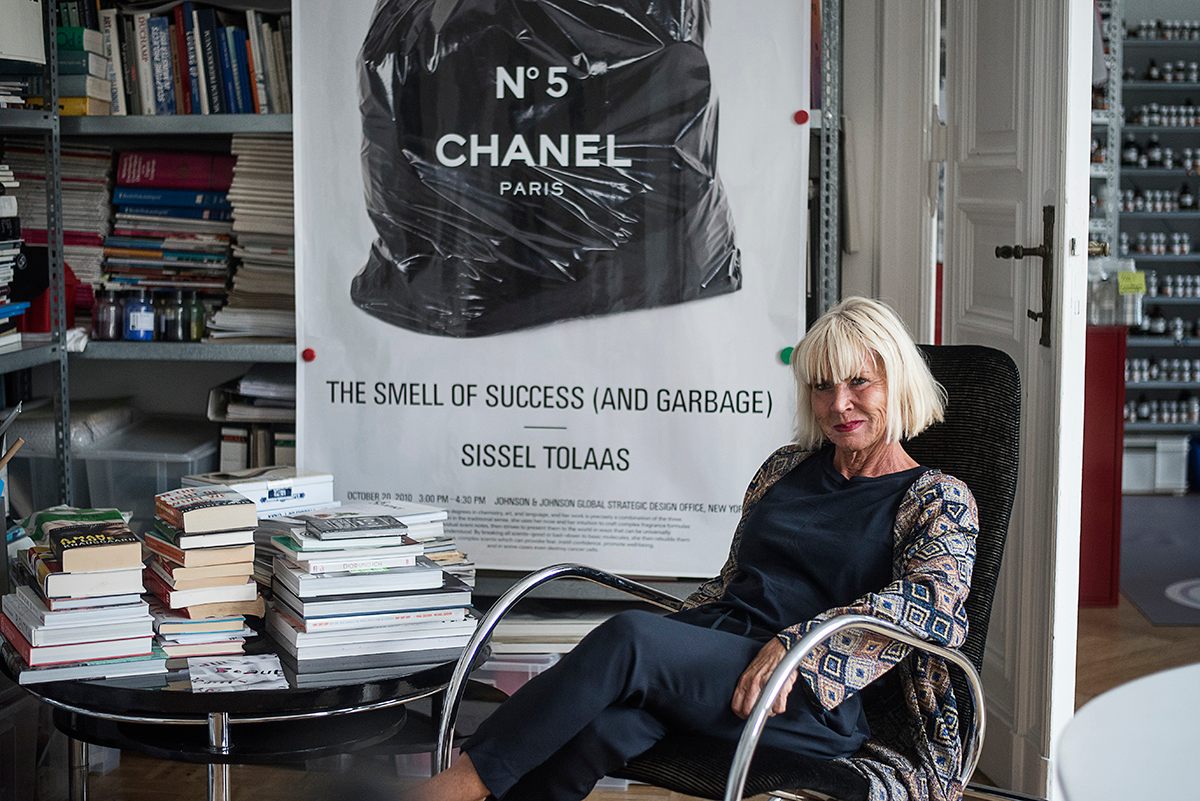 Sissel Tolaas in her studio in Berlin. All Photos: Maria Runarsdottir

“Every capital city has its own smell. London smells of fried fish and Player’s, Paris of coffee, onions and Caporals, Moscow of cheap eau-de-Cologne and sweat. Berlin smells of cigars and boiled cabbage.” This observation comes from the 1963 travelogue Thrilling Cities by the British author Ian Fleming—and, at least when it comes to Berlin, it’s rather outdated. Today, more than five decades after James Bond’s creator took his nose for a trip around the world, the ever-changing German capital seems to be smelling like doner kebabs and currywurst more than anything else. But for Berlin-based olfactory artist Sissel Tolaas, who creates “smellscapes” of major cities, it smells like so much more.

“Every city has an identity like we humans do. And every city is unique smell-wise,” explains Tolaas, a half-Norwegian, half-Icelandic expatriate artist with background in chemistry, linguistics, mathematics, and visual arts. “The odor depends on things like climate, geography, demography etc. Inside the city, smells differs from neighborhood to neighborhood. For example if you go to Berlin’s Neukölln neighborhood, you’ll notice it’s quite different from, let’s say, Charlottenburg when it comes to smell.”

To Tolaas, the ethnically diverse Neukölln, which she studied back in 2004, smells like heaven. “Its smell is very complex because of the many foods and spices,” she says. “There are many body odors as well. And dry cleaners. Most of them are in the basement, so when it’s hot the smell comes up and you can almost see the white shirts coming out, flying towards you.”

Tolaas, an energetic, fast talking blonde with a platinum-blonde bob that makes her look like the Australian singer Sia, knows what she’s talking about. She is one of the most respected olfaction experts in the world and has turned collecting, dissecting, and engineering smells into a life mission.

The artist has been working in the medium of smell for more than 20 years, and has amassed a personal smell library of more than 6,500 odors caught in airtight cans. She’s taken her interest in odors to new heights by making Limburger cheese from bacteria found in David Beckham’s shoes—cheese that was then served to the VIPs at the London Olympics. She also managed to recreate the long lost smell of the First World War for the German Military History Museum in Dresden. But nowadays Tolaas is traveling around the world and mapping its cities, one smell at a time. The project, called SmellScapes, has taken her to 35 cities so far, from London and Paris to Cape Town to Kansas City (both of them).

Tolaas started working on her SmellScapes more than a decade ago. Most of them are commissioned by either creative platforms, city councils, or universities and private foundations, and they serve an amazingly wide variety of purposes. For example, her SmellScape of Mexico City, developed in 2001 in collaboration with the Harvard graduate student teacher program, was a creative way to understand pollution.

“The pollution in Mexico City is a big problem,” explains Tolaas. “Back then it was the most polluted human settlement in the world. It was worse than Beijing! This was primarily because the city is high up, it’s situated in a valley surrounded by mountains and it’s flanked by two volcanoes. And it has a lot of car traffic. So, we developed new tools of awareness to understand this problem beyond the way it looks visually.”

While working on the SmellScape of Mexico City, Tolaas visited more than 200 neighborhoods over and over again, trying to identify what makes them smell the way they do. The research resulted in an exhibition called Talking Nose, in which Tolaas created a scratch-and-sniff map of the Mexican capital and videotaped 2,100 of its residents while they described the way the city smells.

“People are tired of looking at melting icebergs and polar bears. Those things became kind of cliche nowadays,” Tolaas says. “Instead of that, I walked around and catched in a playful manner the smells in different neighborhoods. The goal was reproducing the smell of pollution—the car exhaust, the refrigerator, the air conditioner… Then I gave the smells to people and asked them to articulate them which made them understand better what’s causing the pollution.”

Tolaas’ latest SmellScape project is focused on the olfactory identity of Singapore. She carried out fieldwork in selected neighborhoods that have been developed by the architect William S. W. Lim and presented her findings in the ongoing exhibition Incomplete Urbanism: Attempts of Critical Spatial Practice.

But how do one even collect and preserve something so ephemeral as a smell?

“The first tool I use is my nose,” says Tolaas, perhaps rather obviously. “I have to make sure that a certain smell is permanent by going back in different times of the day and the year. In other words the smell should be part of the identity of the site. Then if I’m able to collect the source of the smell, I would bring it to the lab. If the source is, let’s say, a sewage plant and I can’t collect it, I’d go back with a special tool that collect smells molecules from the source and I’ll take a ‘snapshot’ of that smell.”

The “smell camera” Tolaas uses is based on a technology called Headspace. It was developed for perfumers who need to recreate a scent for a specific fragrance, either because the natural flower is too rare to be harvested or because its aroma is too unstable to use in a formula. The same technology might very soon give us the chance to learn what Mars smells like.

Tolaas collects the smell samples in a small glass tube called tennex. Then the container is sent to her research partners from International Flavors & Fragrances, an American perfumery corporation headquartered in New York City, which according to Tolaas is “one of a small number of companies which controls how the world smells and tastes.” IFF helped Tolaas in establishing her research lab in Berlin in 2004, and has supported her with full olfactory analysis ever since. After analyzing the sample with a gas chromatograph, IFF sends Tolaas a formula that contains the fingerprint of the smell captured, describing all the subtle nuances in great detail. Using this data chart, Tolaas replicates the smell in her lab, combining some of the nearly 4,000 individual molecules she has at her disposal. The result, Tolaas explains, is as close as possible to the original smell, considering today’s technology development.

“What is important here is that to reproduce certain smell from reality as close as possible, one needs to work with abstract smells molecules,” she says. “So, you have to basically build up a smell from scratch. It sounds very simple but in fact it’s a lot of work. You do a small mistake putting one or two nano units more and the whole batch goes bad, so you’ll have to start from the beginning.”

Cities tend to change the way they smell through time. That’s especially true for an ever-changing metropolis like Berlin. Tolaas’ SmellScape of Berlin was created between 2002 and 2004, and she mourns the smell of that city: “Back in 2002 Berlin smelled more interesting than today. It was more diverse then.” But certain parts of Berlin, says Tolaas, have stayed the same over time. Like the U-Bahn station Berlin Jannowitzbrücke in the former East Berlin.

“If you remove a couple of tiles from its wall, the smell of the German Democratic Republic would come off immediately,” she says. “It’s that of lignite and a detergent which I suspect was used in all the public buildings, probably supplied by the same, state-owned company. The smell is omnipresent as if The Big Brother is looking at you.”

Smells can reinforce and reflect the identity of the cities—and yet few people think about preserving a city’s olfactory heritage. Indeed, Tolaas may be the only person doing so—but she’s confident in her work. A thousand years from now, she says, someone using her SmellScape charts would be able to recreate truthfully the smell of the cities she’s mapping. Maybe they’d even learn a thing or two about the city’s history.

But for Tolaas, collecting and recreating smells is first and foremost something she does for art—and for fun.

“It adds quality to being alive. To rediscover the amazing efficiency of senses is so mind-blowing! We live in a world that’s sanitized, sterilized and deodorized to a such an extent, that we don’t have a clue what’s going on anymore,” she says. “That’s not healthy for … the people, nor the cities or the planet. Our bodies are equipped with this amazing software for the purpose of navigating and communicating the world we live in. And the best part is that these ‘tools’ are free. They cost nothing! So, I’m trying to re-educate people how to use these amazing tools, to understand the world in a different way. And whatever it takes to bring across this experience to humanity, I will do it.”

No one has actually seen them, though.
smellscitiesfeaturesart

From Nodding Night Court to Dove Sail Lane, the town’s address choices are both practical and poetic.
paintings

The history of unpleasant odor, or miasma, has unexpected relevance in the time of COVID-19.
maps