This Map Shows The Future of Your Immortal Soul - Atlas Obscura
Want to see fewer ads? Become a Member. 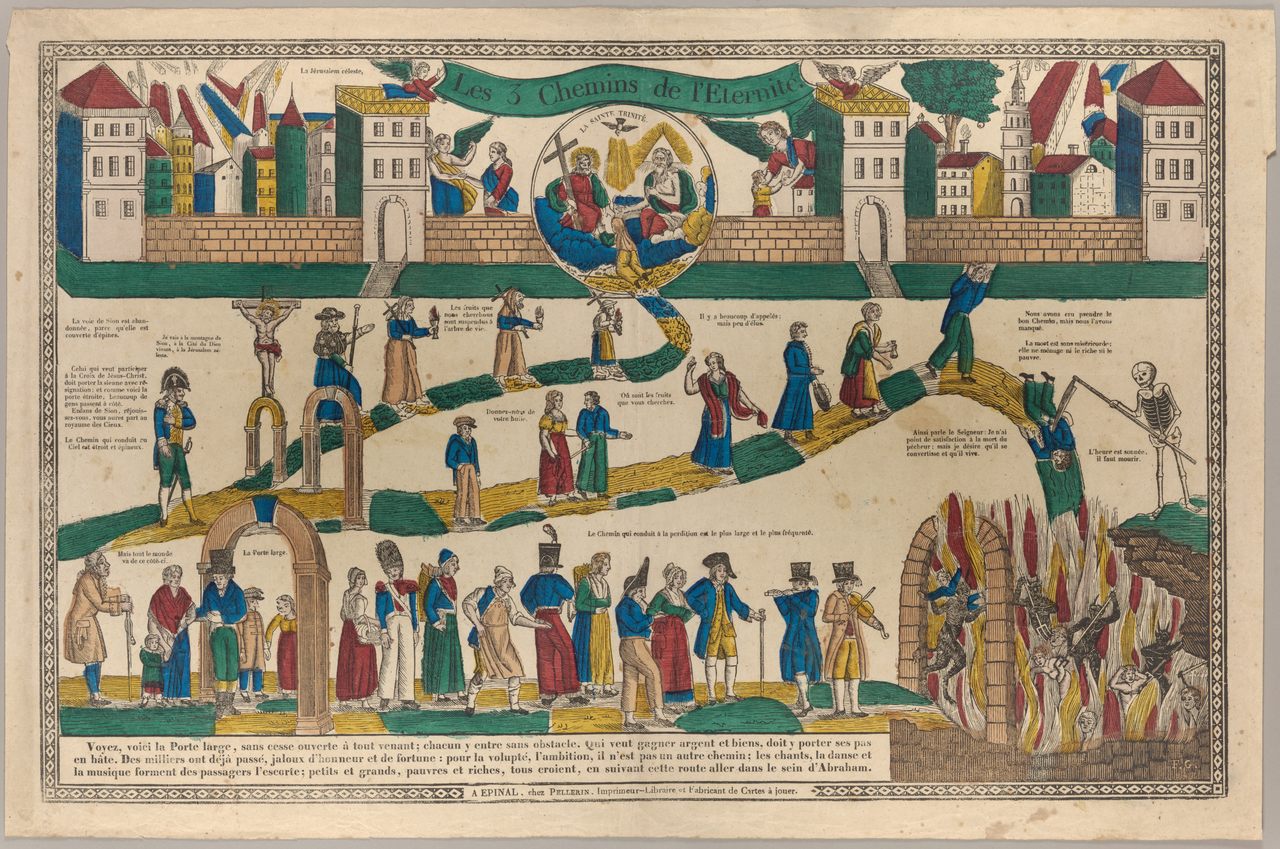 3 Roads to Eternity by François Georgin. All images: Courtesy of Cornell University - PJ Mode Collection of Persuasive Cartography/CC BY 3.0

If you’re worrying about the state of your mortal soul, this handy graphic by François Georgin could help you.

Published in 1825 in Jean-Charles Pellerin’s print shop in France, 3 Roads to Eternity alludes to Matthew 7:13-14. The biblical passage describes the different roads a soul can take:

Framed by a large doorway, the wide path to hell is crowded with people from all walks of life. From mothers who bring their small children with them to perdition, to aristocrats, to peasants, to musicians. The damned are oblivious to their fiery fate and sport light-hearted smiles and joyous faces.

To emphasize this point, Georgin provides us with an inscription underneath the path:

“Look, here is the large door, always open to every newcomer; each one enters without obstacle. Those who wish to become rich are hasty to enter. Thousands have already passed, hungry for honour and fortune: For sensual delight and ambition, there is no other road; singing, dancing, and music scort passengers through; young and old, poor and rich, all believe, as they follow this path, that they are heading to the bosom of Abraham.”

Once they have reached the threshold of hell, a demon drags them into the flames, where they are tortured until the end of time.

There are two other roads for a person to take, only one of which leads to eternal life. The middle one does not appear in Matthew’s description, but rather seems to be an invention of Georgin. This path stems from the path of the righteous.  We see a member of the French Royal Army standing in front of the two paths, clearly choosing which one to follow. In a Goldilocks and the Three Bears fashion, the middle doorway and its path are mid-sized. There are still quite a few people on it, but the number has decidedly shrunk. Allegedly, there are the people who have strived to follow the path of the Lord, but who have strayed from it.

Next to two of these unfortunate souls, is an allusion to the parable of the ten virgins in Matthew 25:1-13. In the parable, five wise and five foolish virgins set out to meet their grooms at night but the foolish ones are unprepared and must buy more oil for their lamps. When they return, the doors of the church have been shut and they are forsaken. Such is eternity, Matthew tells us, “Therefore keep watch, because you do not know the day or the hour.”

And unprepared indeed are the people on the middle path. Unlike the utterly oblivious souls of the lower path, the faces of these pilgrims show that they become more and more aware of their mistakes as their hour approaches. Even before death takes them with its scythe, they realize their inevitable end and approach it with horror as they exclaim “We thought we had taken the righteous path but we have missed it.”

As for death, it is neither cynically joyous nor scary. If anything, it seems resigned. Its depiction seems to echo the description Georgin placed next to the downward spiral towards hell:

“So speaks the Lord: I take no pleasure in the death of a sinner, but I desire that he converts and lives.”

Of course, life and death don’t refer to the end of the mortal body, but to the soul. To live, according to Roman Catholic tradition, is to be in heaven with the Lord.

And for this there is the last path. Its golden doorway to eternal life is adorned by a Crucified Christ. An inscription tells us:

“He who wishes to partake in the cross of Jesus Christ must carry his own with resignation: and since here the door narrows, many pass it on the side.

Children of Sion, rejoice, you will be part of the Kingdom of Heaven.”

The people on the third path are shown carrying their crosses with tranquil smiles on their face. These saints are received with open arms by the Holy Trinity, and thus enter the Celestial Jerusalem, where angels await them.

What makes the map interesting, besides its delightful graphics, is the historical context that surrounds it, as it was printed during the Bourbon Restoration, which took place from 1814 to 1830. At this time,  Louis XVI’s brothers, Louis XVIII and Charles X, restored the French monarchy after overthrowing Napoleon and the First Empire.

During the French Revolution (1789-1799) there were heavy efforts to dechristianize France. Churches were closed, and members of the clergy were killed, arrested, or turned out. Though under Napoleon, the Catholic Church gained some of its power back, it was during the Restoration period that it once again gained recognition as an institution of power.

The illustration, then, comes at a time when Catholics were coming back from persecution, and probably felt righteous against the “infidels.” This would explain why Georgin decided to include a third path for those who had started out on the “path of  righteousness” but had been lost. It could have very possibly been a warning to those who had strayed of where they would inevitably end up.

More than a pious depiction of how to reach eternal life, this map might just be a very elaborate religious burn.

Where to pick up fetishes, voodoo dolls, animal bones, hexes, and curses.
maps

How The World Looked When Jesus Was Born, According to Roman Geographers

It was a far different world when these maps were made.
sacred spaces