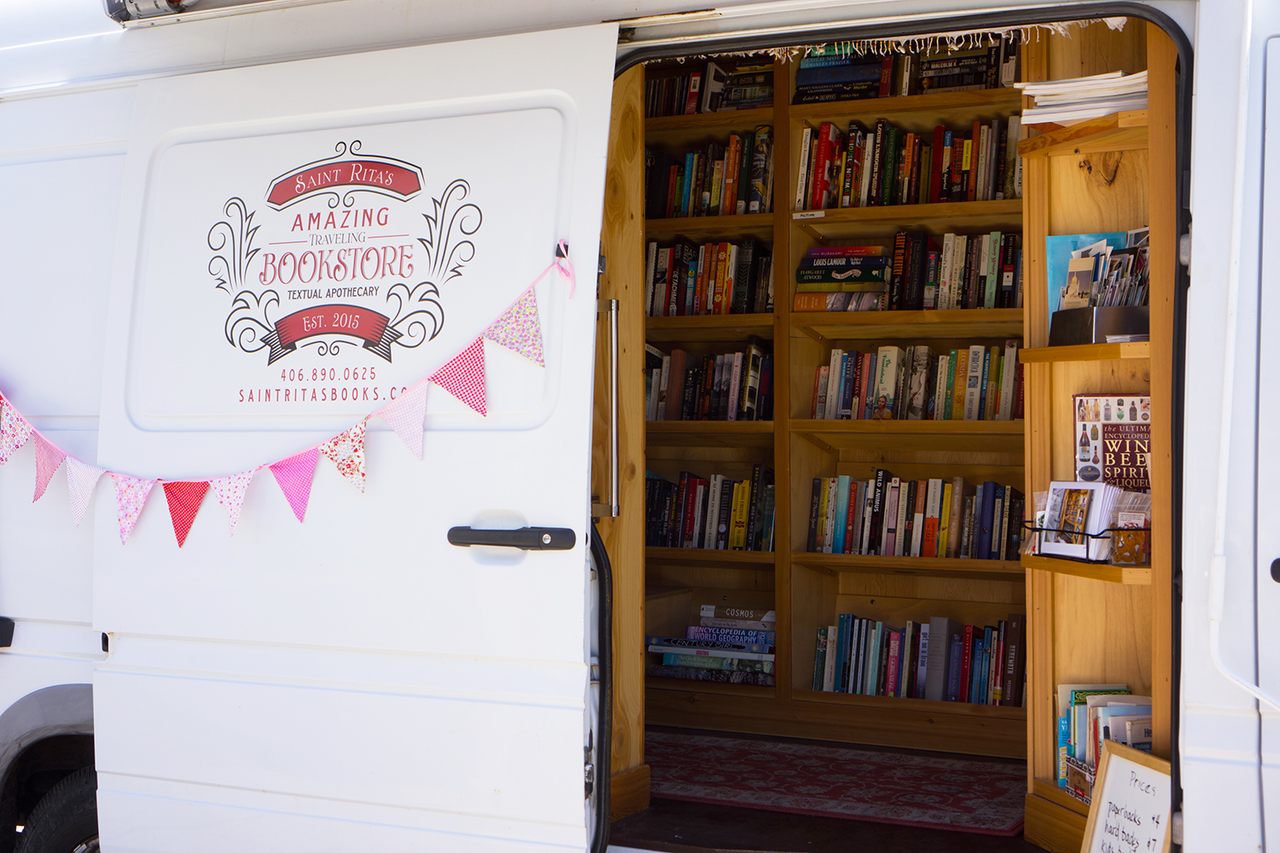 It’s a frigid morning in April when a shiny white van pulls into the parking lot at Isabel’s Family Restaurant in Woodstock, Illinois. A few flakes of snow float in the air as the driver backs the van into a corner spot. Members of a local collective, the Atrocious Poets, climb out of their cars and start setting up typewriters to craft on-the-spot poems.

At the epicenter of this small-town gathering about 50 miles northwest of Chicago is Rita Collins. Wearing several warm layers, Collins pulls open the van’s sliding door. Next to the door and under an awning, she sets up a folding table and a few chairs along with several small merchandise racks. Book-shaped earrings—real paper pages bound in tiny leather covers—dangle from her ears as she writes prices on a white board. Setting up on this cold spring morning is just another day on the job at Saint Rita’s Amazing Traveling Bookstore and Textual Apothecary, a mobile bookshop run by the itinerant bookseller.

Since 2015, Collins has piloted her traveling bookstore around her home state of Montana and across the U.S. several times. What started as a seasonal summer project evolved into a year-round, part-time business after Collins retired in 2017 from a long career in adult education, teaching in Montana as well as recent stints in Romania and Czechia.

Like many bibliophiles, Collins had always wanted to own a bookstore. But she ran into a roadblock. Collins lives in Eureka, Montana, a town of just over 1,000 residents that can’t financially sustain a brick-and-mortar bookshop. Taking a one-week business-planning course with the American Booksellers Association, she realized another option was possible. “What about a traveling bookstore?” she asked her instructors. They were skeptical. But Collins knew she was onto something big—as big as a van or bus, anyway.

She drew inspiration (and some practical advice) from Dylans Mobile Bookstore, a traveling bookstore on the other side of the pond. Based in Wales, Jeff Towns, along with his son, Joe, turned to mobile bookselling after shuttering his storefront in the early 2000s. Named for Dylan Thomas, Towns was the only other traveling bookseller Collins could find to contact for advice. (Several novels featuring fictionalized traveling booksellers offer addition inspiration, including Jenny Colgan’s The Bookshop on the Corner and Nina George’s The Little Paris Bookshop.) Collins named her venture Saint Rita’s not just for herself; Saint Rita of Cascia is the patron saint of impossible causes.

Reaching the first few mile markers—buying a used Sprinter van with a reliable diesel engine, asking a local friend to design a simple red-and-black logo for the business—was relatively straightforward. Harder to navigate was keeping the books from sliding off the shelves while on the road. Collins called a carpenter friend to build some sturdy custom wood bookshelves to hold the books at a secure, slight slant toward the van walls. The design mimics that of some library bookmobiles and keeps the books in place until eager shoppers pull them out.

Out on the road, Collins crowdsourced other feature requests. “The first day I opened, I realized I would need a handle to help people get into and out of the bookstore safely,” she notes. So she installed a heavy steel grab bar that helps people step from the pavement into the van. She also puts down a portable wooden step at every stop and added a rooftop solar panel to power two overhead lights inside the van so customers could more easily browse her donated inventory.

In the beginning, Collins had assumed friends would donate novels and nonfiction while she worked out how to source the rest of her goods for a low cost. But the reality is that everywhere she goes, she receives bags and boxes overflowing with used books from friends as well as enthusiastic strangers. “Often, even if I sell a lot, I return from a trip with more books than I left with,” says a bemused Collins. “Besides helping with my business model, the donations help me offer a range of books that I might not carry otherwise.”

Prices can vary slightly, depending on her location for the day. But the books are always priced by type, with paperbacks typically a few dollars cheaper than hardbacks. Children’s books are always one dollar each.

As Collins has become a repository for extra boxes of books, she has also become a donor to literacy programs, as well as prison and public libraries, across the country. “I’m a book conduit now,” she says, noting that she sorts through thousands of titles and passes on roughly a third of the books she receives as donations.

Part of what draws the curious public to her textual apothecary is Collins’s obvious enthusiasm for writing as well as reading. At every stop, Collins puts a manual typewriter next to some smaller bookracks on the folding table out front. Occasionally, she’ll offer a small discount if shoppers type something. She borrowed the idea from Towns, who hauls a typewriter around England with his mobile shop. Collins’s beige vintage Olympia has become a surprisingly intimate accessory.

“One time, a young man typed an entire page and left it with me,” she says. “I read it, and it was this really sad story about a friend of his who died. And I was like, Why is he typing this here on my typewriter? That’s something about this space that I never would have anticipated. Maybe because I’m passing through, and I’ll be gone tomorrow; maybe that makes people more comfortable.”

The device also helps Collins create community, as she’s frequently welcomed to park at typewriter retail and repair shops. Her cross-country trips in 2018 included stops at Ace Typewriter & Equipment in Portland, Oregon, and at a typewriter enthusiast meet-up in San Francisco, California.

As a lover of all sorts of instruments of creativity, Collins recently bought a Moog Theremini, a mini version of a theremin, an electronic musical instrument that musicians play using hand motions near the device. It’s a not-quite-hands-on attraction that helps Collins connect with an even wider network of like-minded small-business owners, including Moog Music in Asheville, North Carolina, where she parked on a 2018 trip. While in transit, Collins charges the Theremini using energy captured with her solar panel.

Though her small town couldn’t financially support a retail bookstore, Saint Rita’s is a community-supported project. It’s just that the community sometimes changes, depending on the arts festival, restaurant, or retailer where she temporarily sets up shop.

In spite of her bookstore’s success, Collins doesn’t plan to do this forever. Within a year or two, she expects she’ll route the traveling bookstore to its next owner. “I don’t hold onto things,” she says practically, but also philosophically. “And that opens me up to do something different.”