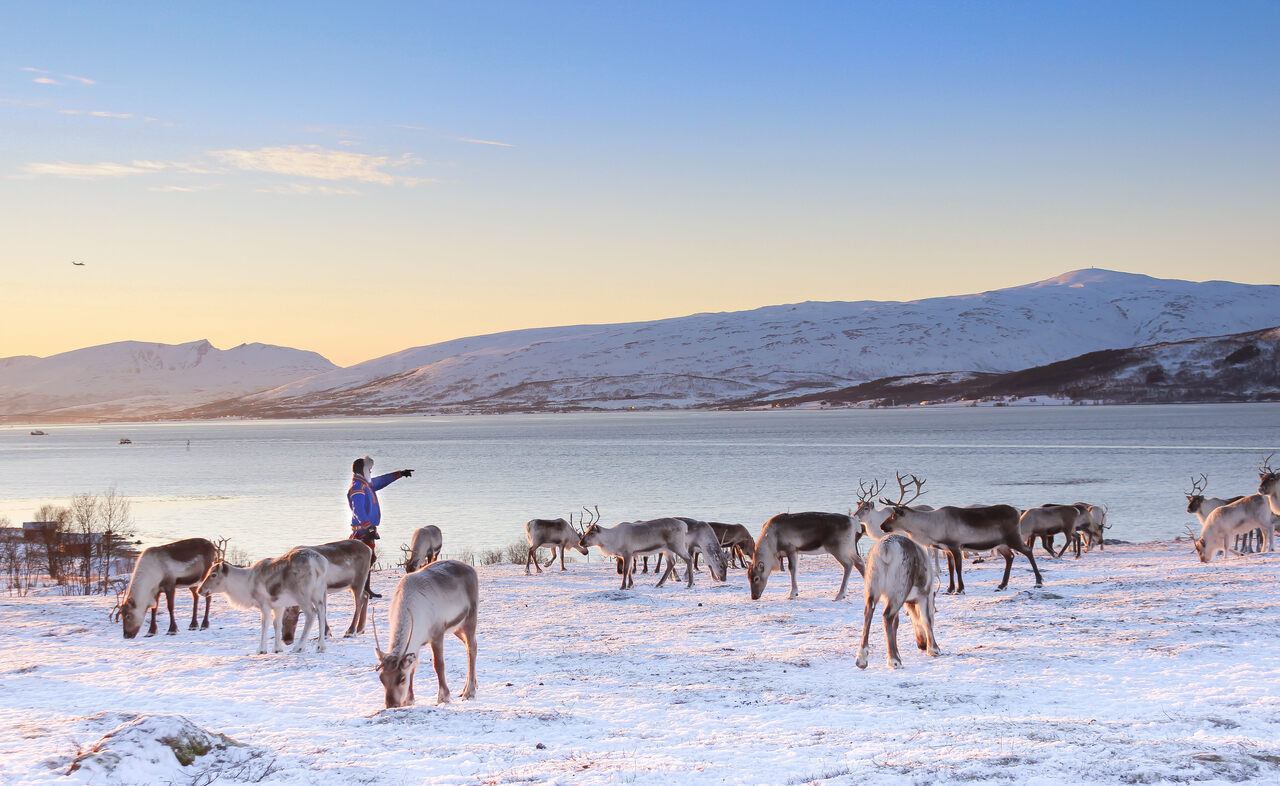 At this Arctic outpost, get to know members of the indigenous Sámi community and meet their herds.
Destination Guide

On a dark, frigid morning in mid-January 2019, two tour buses pull out of the Radisson Blu parking lot in Tromsø, Norway, heading north. They whizz past modern developments, seaside fishing shacks, and dense pine forests. After about 20 minutes, a large, tent-like structure appears in the distance. Called a lavvu, it’s the epicenter of a winter activity that’s attracting more and more travelers looking to get off the beaten track: a visit to a reindeer camp.

The camp consists of a smattering of buildings on the edge of a vast expanse of tundra. A light snow falls as the buses back up the driveway. Tourists, who come here from around the world, bundle up into their wind pants and down jackets to weather the cold. As they step off the bus, they’re greeted one-by-one by their hosts for the day, members of the indigenous Sámi tribe.

Inside the lavvu, seated on reindeer pelts around a roaring fire, the visitors learn about the day’s activities: reindeer feeding, sledding, lassoing, and storytelling.

Founded in 2016 by the reindeer herder Johan Isak Turi Oskal, the Tromsø Arctic Reindeer Experience has two aims. The first is to protect reindeer from the effects of climate change by enclosing them in one area during the winter, and feeding them. The second is to introduce visitors to the culture and lifestyle of the Sámi people, about 40,000 of whom live in Norway.

As northern Norway increasingly becomes a tourist destination—offering a number of winter activities like Northern Lights chasing, dog sledding, and alpine skiing in the winter and cruises and hiking in the summer—projects like this serve a third purpose: showing the economic value of protecting natural ecosystems.

“We try to make it here like the true story,” Oskal says, “how we really are.”

For Sámi herding communities, reindeer are the main source of livelihood, and have been for many generations. Before the invention of the snowmobile, the animals were hooked onto sleds and used for transportation. Their pelts are still used for shoes and rugs, and their meat is exported worldwide.

Reindeer don’t just sustain the Sámi, though; they are an integral part of the Arctic ecosystem. Lately, that precious ecosystem has been disrupted by climate change.

“Our family, we have been feeding reindeers now for about 20 years, and it’s the warmer winters that we don’t like,” Oskal says.

According to the December 2018 Arctic report card, an annual peer-reviewed status report put out by National Oceanic and Atmospheric Administration, the population of wild reindeer and caribou in the Arctic circle has been cut in half in the past two decades. Unpredictable winters have made it harder for reindeer to get food in the winter, and emboldened predators whose traditional prey have been affected by changing weather conditions.

Fencing off the reindeer was one way Oskal felt he could prevent them from dying. So eight years ago, he followed in the footsteps of other herders who had found this tactic successful. “I had my best winter ever,” he says. “I didn’t lose the reindeers.”

In the early afternoon, after spending several hours with the reindeer, who number around 300 at this particular camp, the visitors gather back in the lavvu for a cultural presentation.

Tourism has long provided the Sámi a source of income outside of reindeer herding, and has mediated their relationship with the outside world. Their interaction with the Norwegian government, on the other hand, was often not so voluntary.

Starting in 1850, the government sought to “Norwegianize” the Sámi population, first through restricting—and later seeking to eliminate—the Sámi language and religious practices. Laws required primary education to be taught in Norwegian and made proficiency in Norwegian a prerequisite for owning land. Sámi children were sent to boarding schools, where they were taught how to become “Norwegian”—a practice all too familiar to indigenous communities around the world.

After centuries of Sámi resistance to oppressive official policies, the Norwegian government began to open a dialogue with the Sámi people in the 1950s. In 1956, it established the Sámi Committee, which officially put an end to the Norwegianization process. A Sámi Parliament was established in 1989. A year later, Norway became the first country to ratify the International Labor Organization Convention on the Rights of Indigenous Peoples.

But such acknowledgements cannot heal earlier wounds. “People have lost their language, their history,” Britt Kramvig, a professor at the Arctic University of Tromsø, says. “[They] have lost connections and the relationship to the land. [They] are still losing land because of windmill parks and road building and mining.”

In the fading daylight, Oskal takes a bucket of reindeer kibble and begins to shake it. He holds the bucket high in front of him. His gákti, a traditional cloak used by herders to keep warm on the tundra, flows behind him in the wind. A group of 20 or 30 reindeer surround him, some jostling their neighbors lightly with their antlers to get the best position. He laughs as they try to stick their entire faces into the bucket, and calls for his two sons to join him.

“I’m thinking about my next generation,” he says. “I have two boys here, and I want them also [to] continue to work with reindeers.”

Ensuring the future of the herds is a major challenge, and climate change is perhaps not even the greatest threat, according to Gunhild Rosqvist, a researcher at the Resource Extraction and Sustainable Arctic Communities project.

“When I first started to talk to [the Sámi], the climate issue wasn’t what they were most worried about,” she says. “‘No, that’s not the worry,’ they said, ‘It’s the mining and the exploitation of our land.’”

Conflict between indigenous communities and their governments over land use occurs across the Arctic region. In Norway this conflict goes back to the 17th century.

However, it wasn’t until the late 1970s that the issue gained notoriety in the national and international press, when the Norwegian government announced plans to dam the Alta-Kautokeino River and build a hydroelectric power plant in Finnmark County, where most of Norway’s Sámi live. Locals protested that the plant would, among other things, affect reindeer migration routes. Although it was eventually constructed, the large-scale protests against it contributed to the passage of the 2005 Finnmark Act, a massive transfer of land ownership to Sámi communities.

Still, Oskal says, the government should do more to protect Sámi lands. As recently as February 2019, Norway gave the go-ahead to a copper mining project near the village of Kvalsund, despite opposition from reindeer herders and indigenous leaders. In 2018, it green-lighted a 288-megawatt wind farm on Sámi land. “The tourist industry here is based on the nature,” Oskal says. “If they now are destroying this nature, what’s happening then?”

He thinks the Tromsø Arctic Reindeer Experience, which has seen more visitors each year since opening, might make the government more receptive to their land claims.

Nighttime comes early in northern Norway at this time of year, around 2:00 p.m. Before the guests head back to Tromsø, they are treated to a final demonstration of Sámi culture: a traditional yoik, or song. A yoik can convey many things, explains Anneli Guttorm, one of the guides. This includes respect toward others and toward nature.

Transmitting those values to the visitors is a key element of what Oskal hopes to accomplish. Showing respect for the animals and for the natural ecosystem is a tradition as old as the Sámi culture itself.

“Reindeers means everything,” he says. “It’s how I plan my life. A reindeer herder is always learning. He is learning from nature and from the reindeers, of course. Wherever the reindeers are, there should also be you.”

The unlikely method may reshape an unhealthy relationship between farmers and lions.
animals

The Surprising Importance of Skunks in the History of Chicago

The apex predators mean a great deal both ecologically and culturally.
Read more
Thanks for sharing!