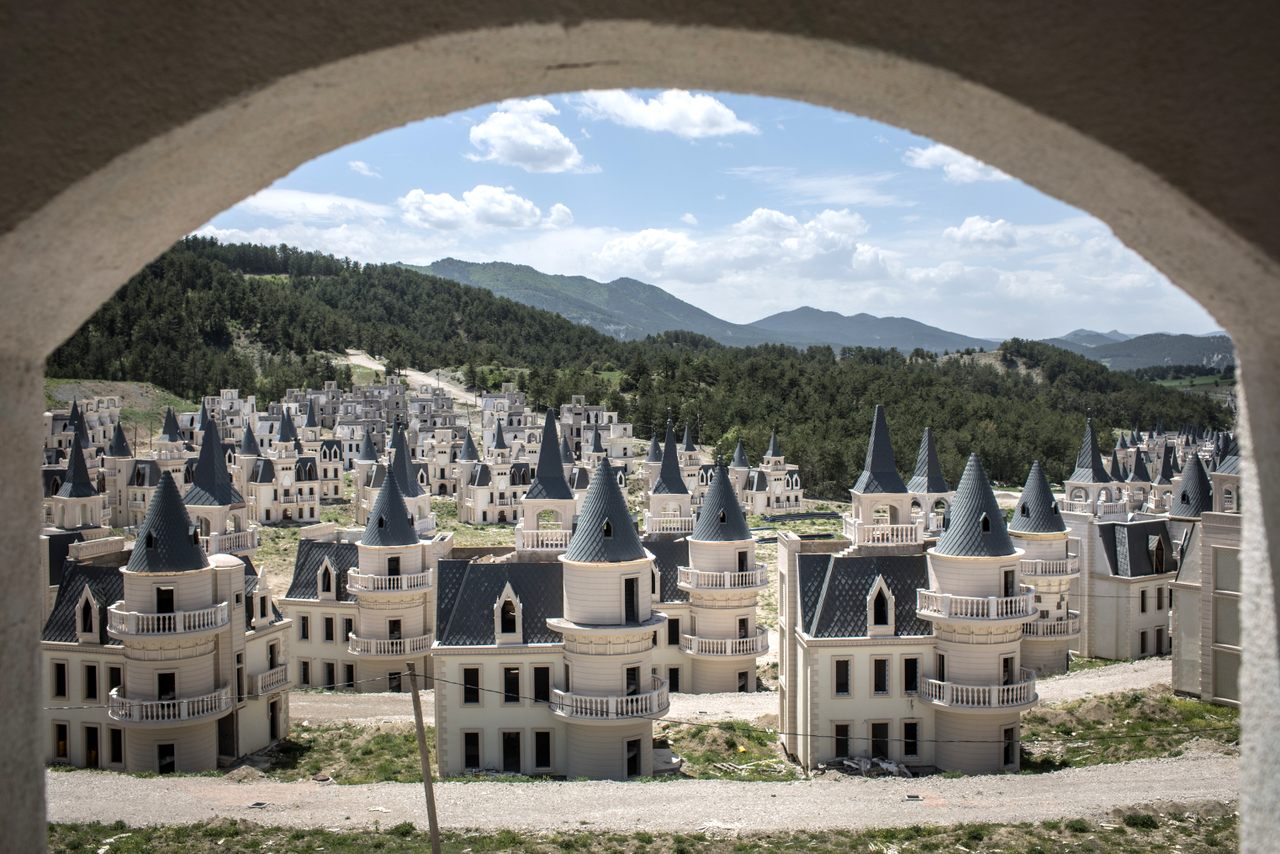 The only residents of this abandoned housing development full of identical castles are stray cats and dogs.
Destination Guide

Halfway between Istanbul and Ankara, in one of the most historic and beautiful parts of northwest Turkey, is a deep valley covered in dense pine forests and blessed with thermal springs. And in this valley is something that seems right out of a Disney movie: row upon row of identical, castle-like, turreted chateaus. When the occasional morning mist enshrouds the blue towers, it’s a dreamy scene, but when you look a little closer, something seems off. The roads between them are unfinished. Construction debris litters the ground. And there’s not a soul in sight. It’s a fairy tale ghost town, an ambitious, luxurious development project that fell victim to mismanagement and global financial currents.

Burj Al Babas, as the place is known, is located a few miles from the historic town of Mudurnu, once at the crossroads of the Silk Road and the Crimean Road. Over the years it lost its position as a trading hub, was reborn as the center of Turkey’s poultry industry, and most recently has turned to tourism to drive the local economy, partly through the efforts of the Mudurnu Cutural Heritage Site Management Directorate. Turkish officials have even proposed making the town a UNESCO World Heritage Site, including its characteristic black-and-white Ottoman mansions.

By the early 2000s, Mudurnu and its thermal springs had—as one might expect—attracted the attention of property developers and investors, among them the Sarot Properties Group, which had already built two thermal springs hotels in the area. Sarot went big with its next idea: Burj Al Babas, a collection of luxurious holiday homes catering to wealthy Arab clients. There would be an opulent Turkish bath, a shopping and entertainment center, and more.

Right away, the development drew fierce opposition from several groups of Mudurnu residents. Though some people saw the development as a source of employment that could boost the local economy, many resented its near-total disregard for the region’s existing cultural heritage and the impact it could have on local infrastructure. “They planned something that they thought would please their envisaged customers, with no regard to the culture clash with the history of Mudurnu,” says Ayse Ege Yildirim, an urban planner specializing in heritage conservation and a consultant to the directorate, “It doesn’t really matter that this monster isn’t in a direct line of vision of Mudurnu because a wood-covered hill lies between.”

Despite the opposition, Sarot’s plan kicked off in 2014, with some $200 million spent on the construction of 587 of the planned 732 villas. But when financial disaster struck in 2018, as both the property market and the global economy deteriorated and the Turkish lira lost value, Sarot declared bankruptcy. Work on the site ground to a halt. Though many of the villas are finished—or at least look that way from the outside—none of the other infrastructure was completed.

Now, it seems Burj Al Babas has become a different kind of tourist draw, a curious stop for those who come to see historic Mudurnu and idyllic Lake Suluklu nearby. But the story doesn’t end with an expensive ghost town. In 2020, Sarot came out of bankruptcy, confident that it could sell enough villas—100, by their estimate, to pay off their debt and continue development. Most recently, the entire project was acquired by NOVA Group Holdings, a multinational American corporation. Mujat Guler, CEO of NOVA Turkey, says, ”Yes, we have acquired this project and a few more from Sarot. We will continue as planned and, like Sarot, we are actively looking towards the Gulf countries for future clients.”

Yildirm figures there are a few possible scenarios for what could happen next. Burj Al Babas could, depending on NOVA’s plan, remains a ghost town and an odd, expensive tourist attraction for that reason alone. Alternatively, NOVA could decide to push ahead and complete all parts of the massive development. And finally, she wonders if it could proceed with what he calls a “rehabilitated design,” with excess units demolished and architectural modifications made to soften the ”kitsch effect.” Whether the project can be salvaged—or whether it should be—is still unknown.

Can You Be Addicted to Travel?

Built from recycled materials by an eccentric con artist in the 1930s, the curious creation was demolished—and then reborn.
Video • Wonder From Home