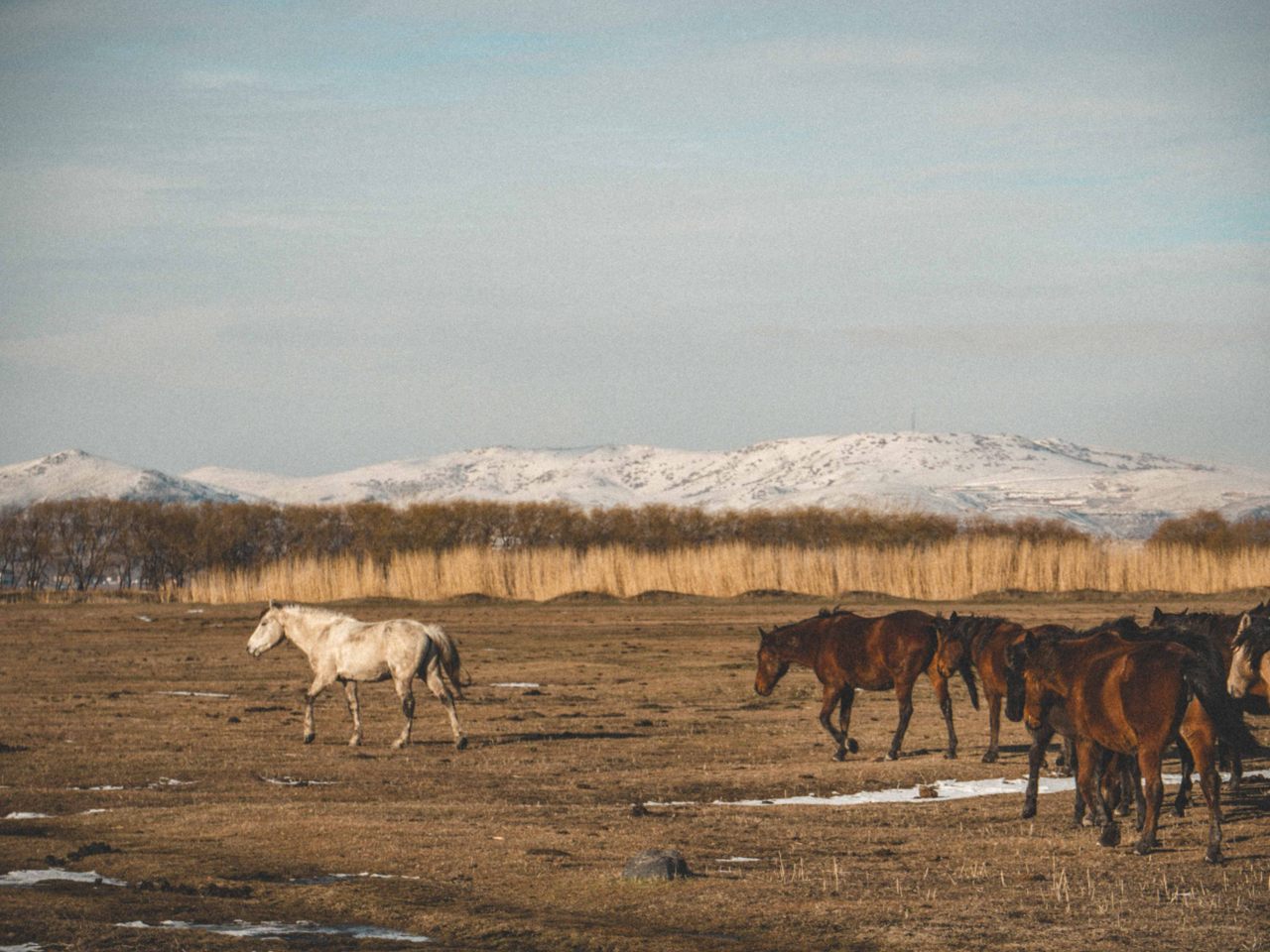 The horses have been wild for generations. All photos: Quentin B.
In This Story
Destination Guide

Not so long ago, villagers across Turkey practiced an ancient tradition of horsemanship that stretches back centuries, to the days of the Mongol Empire. Work horses spent three seasons on the farm, pulling plows in the spring and carts laden with hay, corn, and other produce through summer and fall, before villagers turned them loose for the winter. The horses spent the cold months on their own, scavenging for food on the plains and foothills and relying on their instincts to survive. When spring leaves burst from their buds, farmers rounded up the horses to start another season of labor.

In recent decades, a shift has occurred, and the number of horses left on their own year-round has risen. In the 1970s, Turkish farmers began replacing horses and plows with tractors, which meant they had less use for the creatures—and no need to round them up each spring. Over subsequent decades, many of these horses (which are sometimes also known as Anatolian horses, though it’s not an internationally recognized breed) lived their whole lives undomesticated.

The Turkish word for these horses is “yılkı.”“Yılkı horse means a horse that has been released to nature,” says Ali Turan Görgü, professor and UNESCO chair at Baskent University in Ankara. Rifat Torun, a lifelong horseman in the Cappadocia region, explains the logic behind the practice: “For the villagers, it is expensive to feed the horses through the winter,” he says. “Turning them loose saves money. And it makes [the horses] tough.” Today, the horses are often totally wild, and found across a wide swath of Turkey. “In the Cappadocia region, in Kayseri, Samsun, Afyonkarahisar, Uşak and Karaman and other cities, there are horses living on their own in nature,” Görgü says. “In some regions, yılkı horses have been living in nature for hundreds of years.”

Even if farmers no longer need their assistance with work in the fields, these resourceful horses are useful in the modern world. Ender Gülgen has relied on them for more than 15 years, as a leader of horseback riding expeditions for the travel company Kirkit Voyage in Cappadocia. Gülgen often takes riders out for multi-day treks into the Anatolian wilderness, and counts on the offspring of domestic Arabian and tamed Anatolian (yılkı) horses to navigate the tough terrain. “The Arabian blood brings a liveliness that the Anatolian horses don’t have,” he says. “But the Anatolian blood adds resilience from sickness and toughness to conquer difficult conditions.”

A passionate equestrian since his childhood in the city of Izmir, Ender appreciates the living history that the yılkı represent. The horses are a tangible trace of the various civilizations that have passed through Anatolia. “The Romans brought the barbs. The Persians came with their Asil horses. The first Turks brought the Akhal-Tekes and the other Central Asian breeds, like the Mongolian horse,” says Gülgen. Because the various newcomers bred and mingled their DNA, he adds, “You can find the yılkı in many colors, in many sizes, with dished or straight faces and with short or long legs.”

On the plains around Mt. Ericyes outside Kayseri in Central Anatolia, several large bands of yılkı roam. The herd near Kayseri has gained a sort of fame, thanks to the efforts of local wildlife enthusiasts and photographers. One such enthusiast is Nuri Çorbacıoğlu, an award-winning photographer and professor of philosophy in Kayseri.

Çorbacıoğlu, along with another horseman, Ali Kemer, are the legal owners of over 400 of these wild horses. They ensure that during hard, cold winters, sufficient hay is put out for the horses to eat; they also provide veterinary care if needed. Their ownership also acts as a conservation technique. According to Çorbacıoğlu, the Turkish government has previously rounded up the yılkı horses to make space for developers near the cities of Konya and Karaman. His and Kemer’s private but hands-off management helps protect the way of life to which these wild horses have become accustomed. “The horses are harmless and familiar with people, but they are not tamed. You can’t control them or ride them,” Çorbacıoğlu says.

In summer, the 300-strong Kayseri herd stays more or less together, but when winter rolls in and snow blankets the ground, the horses split off into different bands. This increases their chances of survival—but for visitors, it’s more work to find them. The horses roam a large area between Mt. Erciyes, the Sultan Sazligi National Park, and Kayseri. If you ask Ender, he’ll suggest looking near the shallow lake that serves as a bird sanctuary. Ask Rifat, and he’ll say they’re sure to be near the village of Hürmetci.

If you’re lucky, you might find them there on that plain with Mt. Erciyes as a backdrop, led by a strong, gray stallion. You don’t have to be a horse expert to notice the wary eye he keeps on you, nor to appreciate the discreet way he’ll round up his mares if you get too close. If you gaze at the herd long enough, you’ll see in the eyes, coats, and hoofprints a tale of civilizations come and gone, of battles won and lost, of winters weathered, of history very much alive.

Around the World in 130 Chicken-Soup Recipes

A surprise discovery from Haiti may finally reveal how some famous feral horses got to a distant barrier island.
architecture

Video: Step Back In Time In Plano

6 Old Latrines Worth a Visit, Even If You Can't Use Them

March your tuchus to these historic bathrooms to see how people used to take care of business.
Video