Arizona's Most Unusual Cacti Have Their Own Fan Club - Atlas Obscura
Want to see fewer ads? Become a Member. 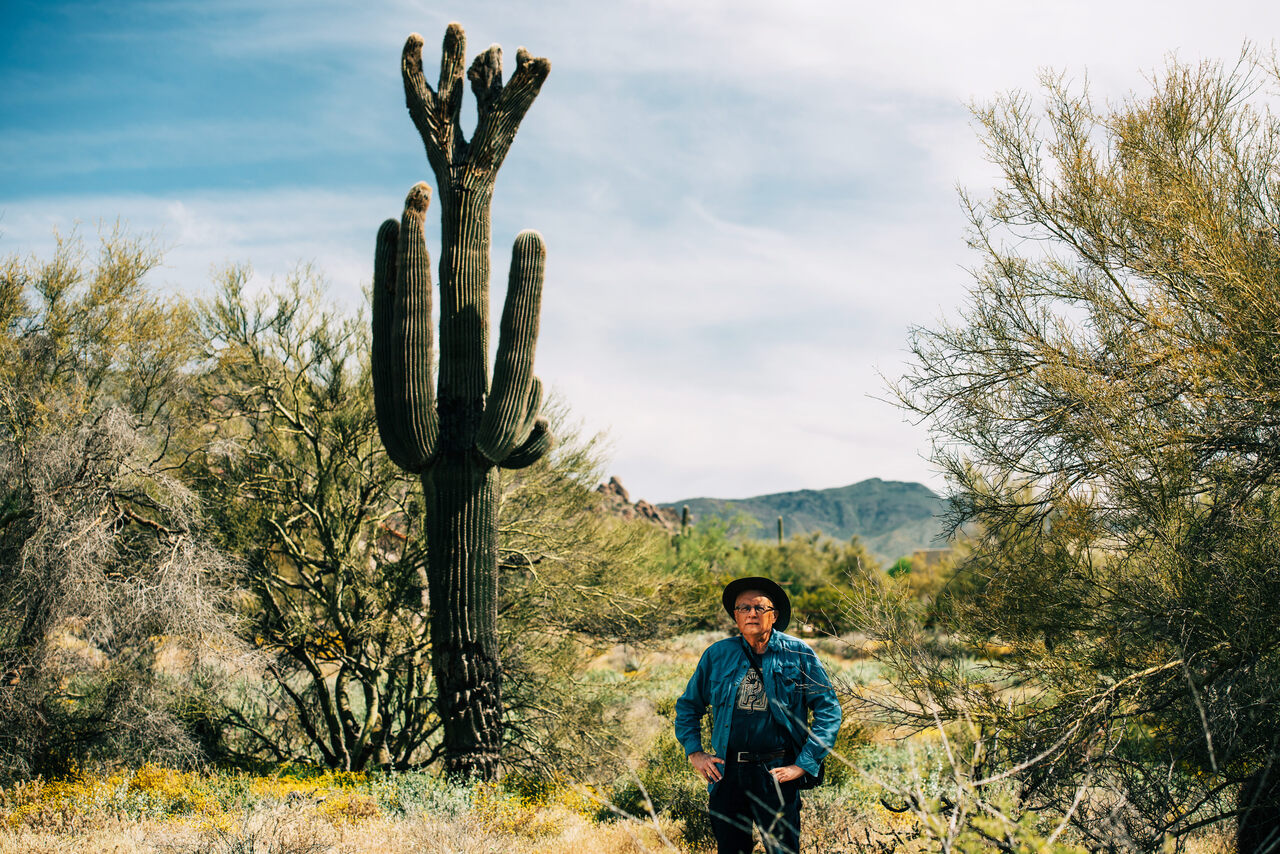 Joe Orman stands below 4 Square, one of the first crested saguaros he discovered. Photography by Ash Ponders
In This Story
Destination Guide

A gnarled, sage-colored cactus is propped along a road in Tucson, Arizona. It’s a botanical kraken, tentacles sprouting from a core ribbed like dry lava. Cars whiz past. Phil Kozol stands beneath the figure, gazing at its claw-like arms. “It’s like staring at the ceiling of the Sistine Chapel,” he says, “looking at all these crests.”

Pat Hammes stands nearby, her face creased. This monstrous beauty of a plant looks ill. And she would know. She’s spent years documenting malformed cacti such as this. Though their exact numbers are unknown, thousands of these crested saguaros, or cristates, speckle the Sonoran Desert.

Kozol and Hammes are members of the Crested Saguaro Society, a group of amateur naturalists bound by one mission: to find and document all of Arizona’s fasciated saguaros. Hammes and Bob Cardell founded the society back in 2006. The crest quest takes members across the northern patch of the Sonoran Desert, where they’ve logged everything from specimens that split like a whale tail to ones that resemble gangly candelabras.

Recently, the society has slowed a bit. Many of its roughly 20 or so members are now in their 80s. They used to get together for meals and hikes, but now it’s more of an online community. Despite the general slowdown, individuals in the CSS continue the search that drew them together.

On a normal saguaro, accordion-like pleats run vertically up its base, tracing the ribs like mountain ranges. But on a cristate, things get funky. Its “growing tip”—the apical meristem, in technical terms—flattens and elongates. The saguaro’s pleats split chaotically, forcing them closer together until they crimp, at times warping the trunk so it spirals. As the pleats smush together, they cause the plant’s growing tip to fan. The final result is a rippled crest as unique as a fingerprint.

Sometimes the crest forms at the top of the trunk, turning the saguaro into what resembles an oversized stalk of smushed broccoli. Other times it sprouts near an arm, or regular limbs may emerge around the crest. Regardless of where the fasciation occurs, the malformed limb always has a seam around its edges, stitching its two sides together.

No one knows why a saguaro, or any plant, crests. The most common theory is that a mutation in the meristem causes the cells in the growing tip to go awry. Others propose fungus on the roots, and still more suspect lightning strikes, freeze damage, insects, or infection.

Frans Tax, a professor of molecular and cellular biology at the University of Arizona, compares it to a benign tumor. As Tax and CSS members note, in most cases, fasciation won’t harm the cactus, and the plant may still flower and sprout seeds. Yet like a benign tumor, the unregulated growth can nevertheless pose a threat. If a heavy crest forms at the top of a saguaro, its weight could make the plant too top-heavy, leaving it vulnerable to strong winds.

There’s also a human risk. Saguaros, icons of the American Southwest, are protected by the Arizona government. But poachers still manage to snatch the cacti from public lands. The slow-growing plants—it takes upwards of 75 years for an arm to form—can go for about $100 per foot on the black market. Crested saguaros, because of their alienness, are particularly enticing.

This anthropogenic danger makes members of the CSS protective of the plants. Though they log the GPS coordinates of each cristate they find, they won’t publish that information online. A few members even keep their own databases, which they won’t share with their colleagues.

The secrecy can lead to confusion. Joe Orman, who joined the society about seven or eight years ago, recalls having spotted what he thought were new specimens only to find that Cardell, who has documented more than 2,000 crested saguaros, discovered them years ago.

But repeat visits like this have their benefits, as they let society members check a crest’s progress. Monitoring a crest is, as Kozol says, “like watching corn grow in Iowa.” It’s a long, slow process, where even the first hint of a seam may take years to fully crest, if at all. Orman photographs each cristate he revists, looking for signs of growth or damage.

Just outside Scottsdale, Arizona, standing at the base of one of the earliest crested saguaros he discovered, Orman begins snapping photos, knowing this may be the last time he’ll see the cactus upright. He spotted it while mountain biking about a decade ago, before the real estate developments popped up along the dirt road. The saguaro’s top splits into two Y-shaped growths, one capped by a distinct crest. Now, it’s starting to gray and shrivel, chunks of flesh stripped from its trunk, perhaps gnawed by rodents.

But even when death comes for the CSS’s beloved cristates, the quest will continue, as there are still unknown crested saguaros sprinkled throughout the Sonoran Desert. Some are shuttered within gated communities, while others may have been spotted before, but were mistaken for normal saguaros because they hadn’t yet crested. More hide in plain sight—Hammes found one just off a busy road she’d driven down for years; another she spotted in someone’s front yard after taking a detour to escape traffic.

The best way to find a new crest is to ditch the well-trekked trails. CSS members will look at a map and choose an area they’ve never seen and set out, armed with their hiking gear, snacks, and plenty of water. Once at a given location, they’ll head to a high point and, binoculars or scope in hand, scour their surroundings for a hint of the unusual. Perhaps they’ll see the start of a seam or a swatch of wonky pleating. They spend hours, even days, exploring where the trails end and the desert sprawls. “No trespassing” signs and barbed wire fences don’t deter them, though some have encountered angry ranchers and hostile homeowners.

For Orman, searching online is also part of the adventure. He’s the society’s acting webmaster, and also fields tips from the public that come in via his own website. He’ll compare photos of the cristates, making sure the tips don’t belong to known specimens, and use objects within the images—a hill, a building, power lines—to piece together clues about a saguaro’s location. He’ll peruse Google Earth to verify locations; sometimes, the satellites will capture the shadow of a crest. When he’s compiled a batch of tips in one area, Orman will take his digital sleuthing out into nature.

After so much research, scouting trips are often a success. Crested saguaros are rare enough that they’re a challenge to locate, but not so rare that spotting a new one is impossible, once you’ve learned to seek the signs. “When you spend every weekend, every holiday, out crest hunting, your eyes train to look at the saguaros instead of the rivers and other scenic things,” Hammes says. “I can’t be around saguaros and not look for crests.” Even when in a car, CSS members scan the cacti dotting the sides of the roads, searching for a whisper of weirdness.

Finding the fasciated plants is a botanical scavenger hunt, and the prize is a chance to photograph one of these uncommon beauties. The first CSS member to find a cristate gets to name it, too, but not everyone opts to do so. Orman dubbed one in a Scottsdale nature preserve “Wichita Lineman,” after James Taylor’s version of the song, because the power lines behind it were a clue he used to track its location after seeing an image of the cactus online. Kozol named one he and his wife found after their grandson, and they’re on the lookout for a new discovery to christen after themselves.

At 58 years old, Orman is likely the group’s youngest member and one of its most active. Some of the original CSS members have died, and others have slowed their searches. But Orman still spends many weekends chasing tips. He emails dispatches, full of new discoveries and updates on known cristates, to the society members. He’ll also include images of other things he finds, such as a cluster of wildflowers or an animal skull, to show those no longer able to hike.

In Orman’s emails, he mentions if a cactus is in danger. Wichita Lineman, he says, is at a moderate risk. The armless cactus, crowned by a swirling crest that looks more like an abstract oil painting than a plant, towers near a trail and a neighborhood, meaning it’s easy to find and may wind up on social media, which could draw larger crowds. If groups of people start tromping around its base, they could stress the root system that hides inches below the sun-baked surface. More attention means there’s a risk of intentional threats, too, including poachers or shooters keen to fire a bullet through a fleshy target.

CSS members aren’t the only ones keeping an eye on the unusual cacti. There’s a Facebook group dedicated to posting photographs of crested saguaros with more than 1,200 members (a CSS person is one of its moderators). On Instagram, the #crestedsaguaro hashtag reveals a flood of images. And Saguaro National Park’s upcoming 2020 Saguaro Census will include data on its cristates for the first time.

Though the society’s membership has dwindled, there are still people out there seeking beauty in the bizarre, venturing into the desert or snapping photos of crested saguaros alongside the roads. One weekend in March 2019, Orman went crest hunting and found four new crested saguaros. He has a spreadsheet full of more tips to pursue, hundreds of cristates yet to be found.

Yes, It's a Witch Bottle Hunt

And if you live in Britain, you might be able to help.
deserts & dessertscactusdesertsplants

Prickly pear gummies are a taste of the Sonoran Desert.
candy

How a Candy Craze Almost Wiped Out the Barrel Cactus

Tadpole shrimp hunker down, waiting for water conditions to be just right.
deserts

It's not just a recreational hotspot—it's also an ecosystem.
Video • PinDrop

6:55
Want to see fewer ads? Become a Member.
From Around the Web
Thanks for sharing!