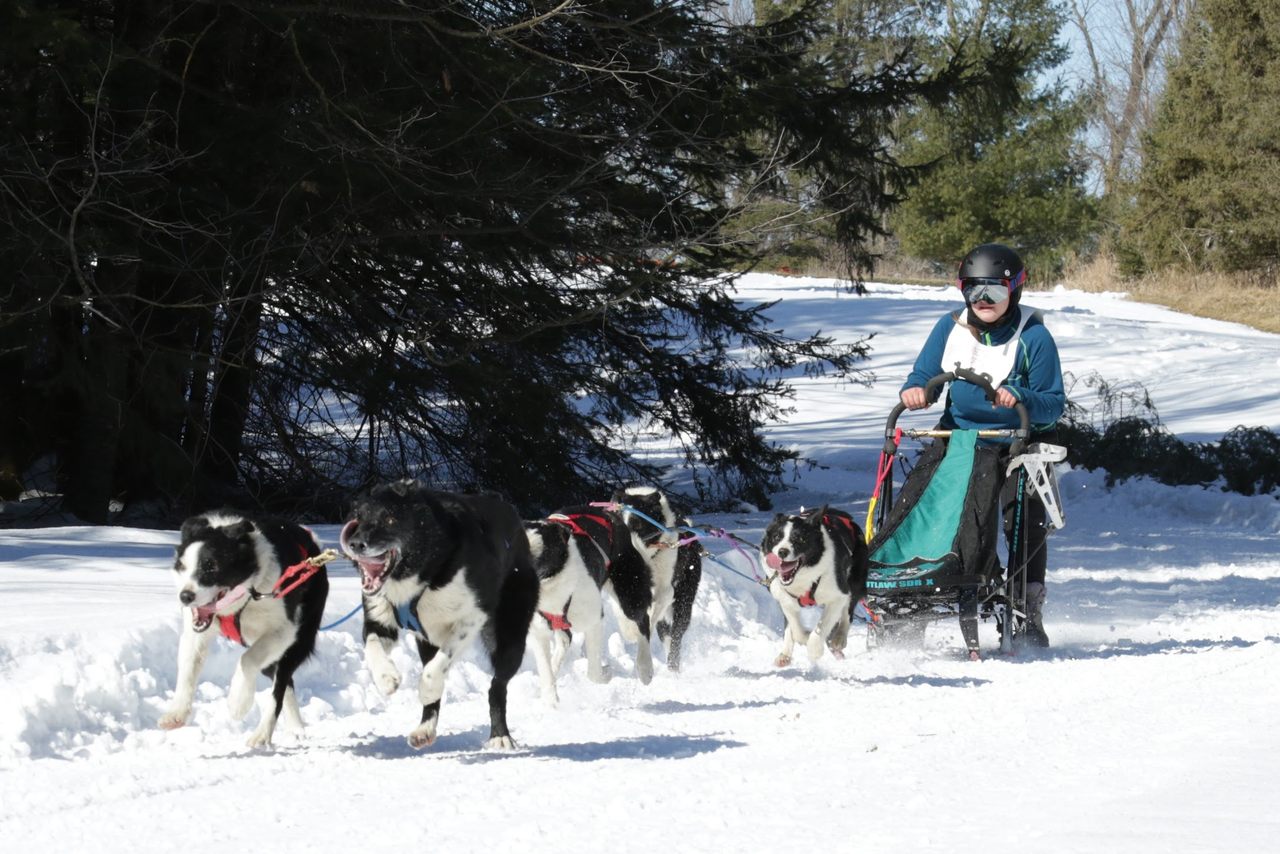 Musher Tabetha Kopta could hear the cheers and shouts as she neared the finish line. After a weekend of races, she and her team of sled dogs were about to place third overall in the New York State Dryland Challenge—for the dogs, however, it was all about the thrill of the run. Pawn and Lilian, her lead dogs, galloped happily, wind flattening their black and white fur as they approached the finish. Like the other four dogs on Kopta’s team, Pawn and Lilian are not huskies, malamutes, or other Arctic-type dogs. They’re border collies.

Arctic breeds dominate ultramarathon dog sledding races like the Iditarod or Yukon Quest, which stretch about 1,000 miles over frozen landscapes. But mushers, both professional and amateur, have worked with a wide range of dogs, including Irish setters, poodles, and even Great Danes.

“Many different types of dogs can channel their inner sled dog and enjoy dog-powered sports to some degree,” says Jennifer Freking, a veterinarian and Iditarod veteran who lives in Minnesota. There’s really only one requirement, she says: “The dog has to be ‘sound,’ which means physically healthy.” Freking’s energetic border collie Eva, for example, loves to join her German shepherd Buck and some of Freking’s huskies for sledding runs of up to three miles, though Eva does not race competitively.

For New Hampshire trainer Haeleigh Hyatt, mushing with her six border collies, Belgian Malinois, and Great Dane just made sense. During the summer, Hyatt and her dogs appear at festivals and other events, where the animals perform a variety of athletic feats and tricks. In the winter, the high energy dogs need another outlet.

After trying bikejoring—cycling with a dog attached to a towline—Hyatt started dogsledding three years ago. She now competes with her dogs in shorter races of up to six miles. She says the border collies love to sprint, while her Malinois has more endurance and enjoys longer runs. Those dogs head out four or five times a week while Aiko, the Great Dane, is happy with one or two outings, getting “exuberant” with anticipation, says Hyatt, every time she sees her harness.

Former police dog trainer Doug Stoakley, who lives in New Brunswick, Canada, says it took a lot of time to figure out how to train his Labrador retrievers to pull a sled. After he “made hundreds of mistakes,” he tried adding an older Alaskan husky named Bridger to his kennel to show his Labs the ropes. He noticed the difference immediately. “It is in the DNA of a sled dog to pull and pull hard,” Stoakley says. He adds that Bridger, about 30 pounds lighter than the Labs, also had better endurance: “Sumo wrestlers don’t make good marathon runners.”

Aside from a pull-hard, don’t-stop mentality, huskies seem to have other unique personality traits, including a tendency to be more independent. Kopta, who is a dog groomer in western Pennsylvania when she’s not mushing, says she prefers her border collies: “Huskies didn’t mesh with my personality the way borders do. I like my dogs clingy and huskies always stuck their noses up at me. My borders worship me.”

Mushers working with unconventional dog teams are not new to the sport. From the 1950s to the 1970s, John Lyman raced throughout New England with his “Flying Irish Setters.” And starting in 1988, John Suter ran poodles in the Iditarod four times. He came up with the idea after watching his father-in-law’s miniature poodle, Fluette, run alongside a snowmobile.

Suter spent eight years trying to train his black standard poodles to pull a sled, but didn’t succeed until he brought in a husky. Like other mushers, he says that pulling is innate behavior for huskies, not poodles, which were bred as retrievers. Though there’s one major advantage to mushing poodles, says Suter: “If you fall off the sled, the poodles will stop, while the huskies don’t care.”

Suter never won the Iditarod, but finished in the middle of the pack in the four years he raced with poodles (with some huskies to round the team out), and also won some shorter races with his unconventional choice. It’s an experiment that won’t be repeated, however. In the early ‘90s, the Iditarod and Yukon Quest changed their rules, excluding non-Arctic breeds.

Despite the use of non-Arctic dogs in the past, and in some races today, Oklahoma State University veterinary physiologist Michael Davis says huskies and other traditional sled dogs have built-in advantages that no amount of training can replicate. These breeds evolved over millennia alongside hunter-gatherers who covered long distances in extreme environments.

Davis says that there are physiological, physical, and mental factors behind why mushers use these dogs, particularly huskies. Metabolically, for example, sled dogs in ultramarathons can burn 12,000 calories a day. Having dogs that are able to process food in an efficient way is a must. In comparison, a sled dog might burn only 1,400 calories a day over the summer; a dog of similar size that’s more of a couch potato might use up half that. However, “we can and have trained Labrador retrievers to be metabolically identical to an Alaskan husky,” Davis says. “[but] they don’t have the feet, hair, or mental focus.”

Arctic breeds have double coats—a dense inner coat of fine hair for insulation and a coarse outer coat—to withstand the extreme cold as well as ice and snow. The dogs cover difficult terrain, including ice, snow, and bare rock, so their paws have “tough, thick pads, well-shaped toes, and [are] often well furred,” says Freking.

Other dogs, such as greyhounds and other hunting breeds, may be able to run faster, but huskies have the mental toughness needed for the Iditarod or the Yukon Quest, says Davis, adding that the dogs need “a willingness to run for 50 miles without a break.”

While the iconic Iditarod and Yukon Quest are out of reach for collies, retrievers, and shepherds, recreational and sprint-distance mushers will continue to race unconventional breeds.

For Freking, there is reward enough in watching her border collie Eva gleefully pull the sled. “This is a thing they do out of sheer joy and motivation. You can’t push a rope,” Freking says. “How can you not catch the enthusiasm of the dogs to run out there in the pack?”

Started in 1997, Šediváčkův Long is one of Europe's toughest winter events.
statues

Destructive mollusks threaten the Canadian province's waterways but K9 Kilo and his handler are on the case.
deserts

A day at your desk will not prepare you for this grueling competition.
Video