The Wartime Posters That Tried to Shame Soldiers Away From STDs - Atlas Obscura
Want to see fewer ads? Become a Member. 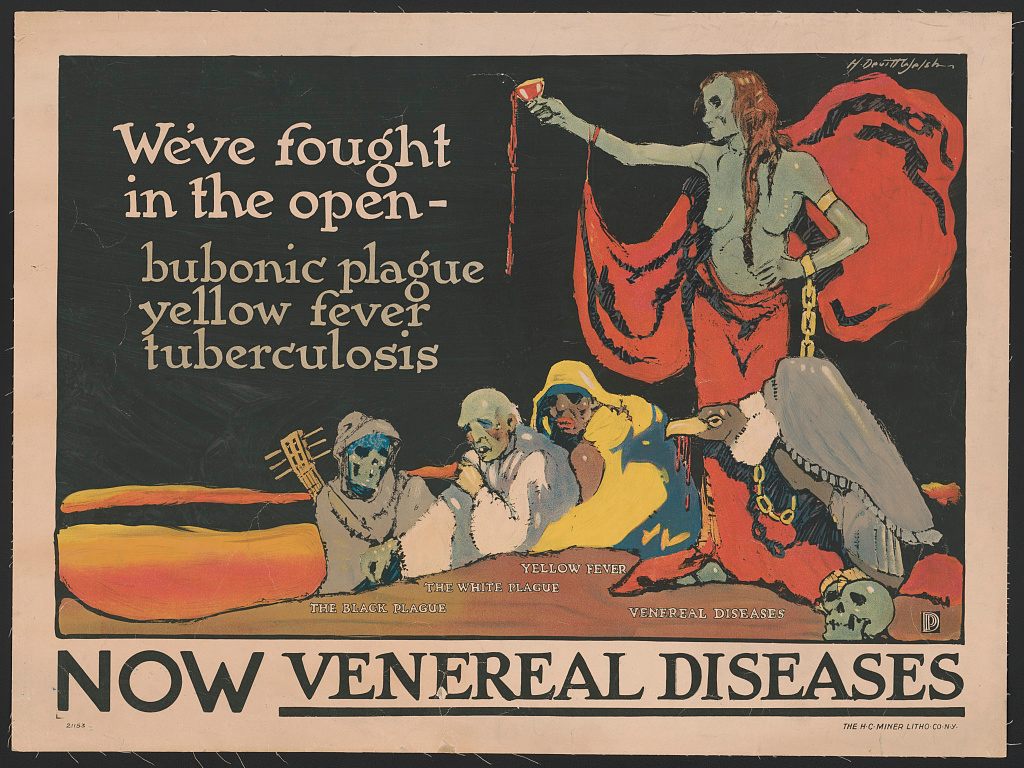 This poster was created by Horace Devitt Welsh for the U.S. Committee on Public Information's Division of Pictorial Publicity, circa 1918. Library of Congress/LC-DIG-ppmsca-50577

By the end of World War I, nearly one million French soldiers had been admitted to the hospital, and more than 10,000 American soldiers had been discharged after hospital stays, not for battlefield injuries, but because they had contracted sexually transmitted infections. The average stay in a hospital for venereal disease (the more commonly used term at the time) lasted 50 to 60 days, valuable time that could be better spent on the war effort. Allied military leaders were in a bit of a pickle. They needed to address a public health crisis, but without appearing to condone what would be considered immoral behavior back home.

The French government’s approach was to open maisons de tolérance, brothels where women were screened (though not always thoroughly) for disease. The British Army Council worried that banning their soldiers from these establishments would offend the French, while the United States had no such qualms and declared them off-limits to troops. British and American military leaders chose a less tolérant approach, and handed out harsh punishments for sexual rule-breaking. By the end of the war, they also produced posters reminding soldiers of the dangers of venereal disease.

Early posters appealed to soldiers’ patriotism, and compared venereal diseases to yellow fever and the plague. In the years that followed World War I, syphilis and gonorrhea remained persistent public health challenges in the United States. (Penicillin wasn’t widely available to troops until 1943, and the general public got access in 1945.) The Works Progress Administration (WPA), as part of its Federal Art Project, produced posters for local and state health departments, many of which urged men and women to get tested, and portrayed venereal disease as a threat to families and worker productivity.

With the start of World War II, military leaders once again had to worry about venereal disease keeping their men from the front lines. American posters were produced by both the Army and Navy, as well as the Public Health Service. Some popular examples were also translated into French, Italian, and Spanish. Much like during World War I, some of the posters of the 1940s equated contracting a venereal disease with helping the enemy. But others that evolved from the WPA posters depicted women as deceitful, pestilential temptresses. Shame was another strategy—soldiers were reminded that wives, parents, and children were waiting for them back home. Other posters were more pragmatic, urging soldiers to “take a pro,” short for prophylaxis, which referred to prophylaxis centers where men were disinfected, as well as kits containing everything from ointment and cleansing cloths to condoms or urethral syringes.

Most of the artists behind the bold, arresting graphics of these posters are lost to history, or known only by one-name signatures (if a poster was signed at all). Some can be attributed to known artists, including Kansas artist Dorothy Darling Fellnagel and Polish caricaturist Arthur Szyk. Stan Lee, of Marvel Comics fame, claims he helped design posters during the war, and told Playboy in 2014, “My mission was to tell the troops to go to the pro station after they’d had sex. So I drew a little cartoon of a soldier. […] Over his head there’s a dialogue balloon that says, ‘VD? Not me!’ They printed a couple million of them. I figure we probably won the war based on that.” It’s hard to say what impact these graphic warnings against disease—and, in many cases, seemingly against women in general—had on the war and soldiers’ behavior, but they likely helped make a taboo topic slightly more acceptable for discussion.

Atlas Obscura has compiled a selection of American VD-related posters from the mid-20th century.

How Newport, Kentucky, Lost the Title of 'Sin City'

Before there was Vegas, there was another American hot spot for bad behavior.
prostitutionsin weeksexdiseaseworld war iworld war iimilitary

The five-day fever was made famous during World War I, but has been a constant companion of poor hygiene.
gardens

For every crisis, a recipe.
nazis

How Famine Under the Nazis Revealed the Cause of Celiac Disease

A food shortage helped one doctor prove his theory.
Video