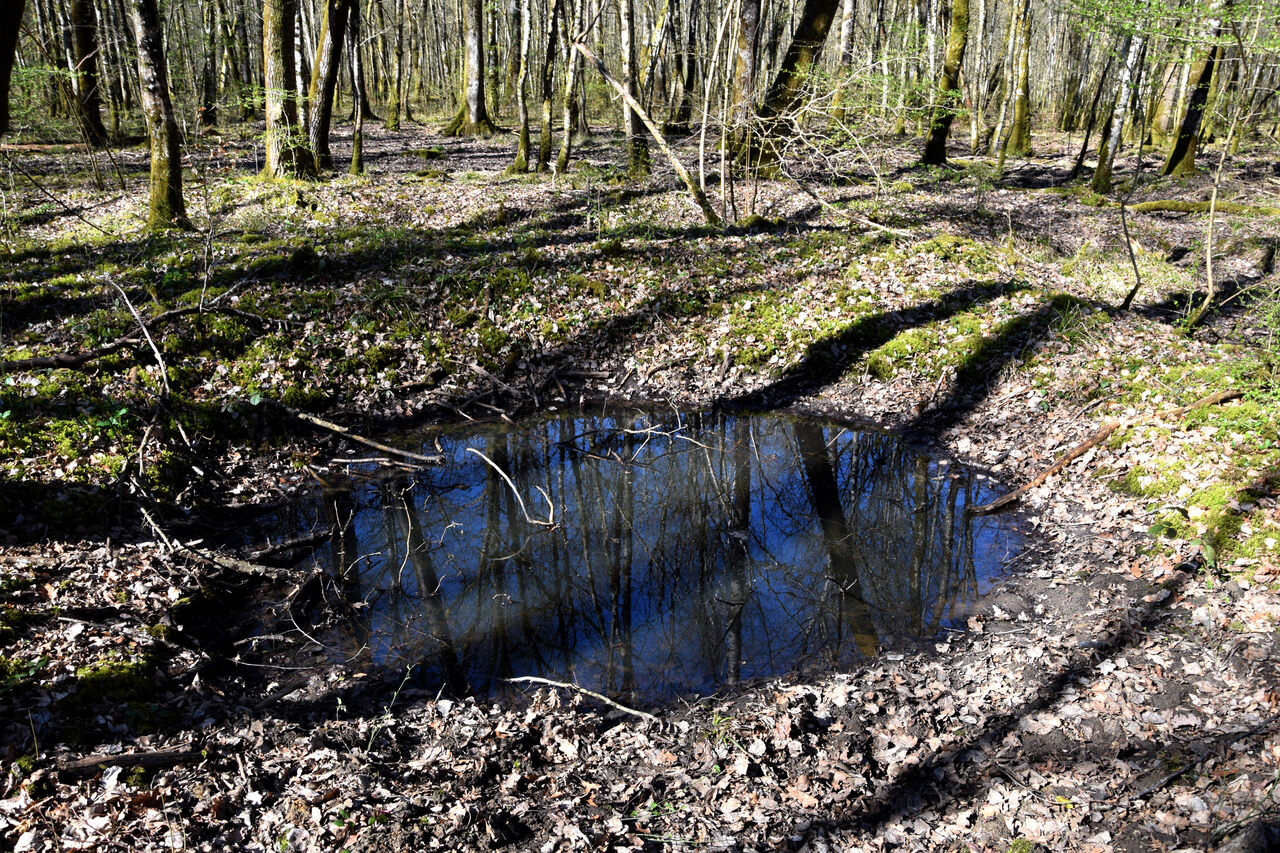 A swath of France so devastated by war it is still forbidden to go there.
Destination Guide

Today, the Verdun forest in France teems with so much charming life that it seems straight out of a storybook. Wild marsh orchids and white swallow-wort sprout. Pear and plum trees pop up every now and then among the pines. Small, furry bats take up residence in the many underground hollows, which are perfect for hibernation. And tiny toads with mottled yellow bellies stay cool in the little pools that dot the forest floor.

But on February 21, 1916, beginning with a two-day barrage of German artillery, Verdun became the site of one of the longest and bloodiest battles in World War I, and indeed in all of human history. Some 10 months later, the German army pulled back, and the conflict left the forest a scarred, muddy wasteland. Many traces of the conflict remained: the bodies of as many as 100,000 soldiers and millions of unexploded shells.* But something surprising happened in the aftermath of the battle, as the orchids, bats, and toads—species that did not live there before the battle—moved in and thrived. This all happened precisely because the land had been irreparably changed by the battle. “Verdun was always a sacred place because of its history,” says Rémi de Matos Machado, a geomorphologist who wrote his doctoral thesis on Verdun’s thriving afterlife. “But now it is a sacred place because of biodiversity. It is a newborn landscape.”

During the stalemate at Verdun, French and German forces lobbed artillery at one another, often indiscriminately, in an attempt to break morale, writes American military historian Robert Cowley in a paper in MHQ: The Quarterly Journal of Military History. New craters appeared almost constantly, sometimes filling trenches that had been dug just hours before, Cowley writes. When pilots flew over the battlefield, they described it as “the surface of the moon.”

But the extreme devastation of Verdun is what preserved its future as a forest, says Joseph Hupy, an aerial systems expert at Purdue University who also wrote his doctoral thesis on Verdun. After the battle, the site was considered a huge mass grave, and was also bedeviled by all that unexploded ordnance. “People were forcibly ordered not to return, not to rebuild,” Hupy says. “Throughout France there was this attitude of not giving up, but they looked at Verdun and how trashed it was and thought, ‘What’s the point?’” So the officials simply gave the land over to forest, sure that the area would be forever devastated.

Before he came to study Verdun, Hupy was into drumlins, or small mounds created by the movement of glaciers. Realizing he lacked the fervent mound passion of other drumlin researchers, Hupy pivoted and took a class on how environments can impact the outcomes of battles. He couldn’t help but wonder about the inverse: How battles impact the environment. So he went to Verdun in 2003, where he slept at a dairy farm by night and traipsed into the dangerous forest by day.

Unsurprisingly, Hupy encountered many unexploded chemical weapon shells. “With time, the gas never gets less dangerous,” he says. “But the really thin metal skin wears away, so much that you could kick it with your foot, crack it open, and die on the spot.” These shells were relatively easy to identify, as each bears a distinctive stripe. Hupy knew he was supposed to report any unexploded shells to French forestry officials, but back then he just moved the shells around himself. In one memorable instance, he remembers swinging a pickaxe in a crater in an attempt to locate the bedrock. He hit something that gave off a metallic ping, and kept right on swinging away until he realized he was whacking away at a 155-millimeter shell.

Explosives aside, the Verdun forest today looks nothing like it did in the years leading up to World War I. Before it was a battlefield, Verdun was a farming region of nine villages. There were fields of wheat, oat, barley, rye, and potatoes, with cows wandering the nearby slopes. After the war, it was clear the land could not be replowed, so the government designated nearly 23,000 acres of Verdun a “Red Zone,” too dangerous for public access, and began clearing some—but not all—of the corpses and ordnance. Anywhere from 200 to 300 million shells remain, according to an estimate from Daniel Hubé, a researcher at the French geological survey. “In 2014, one guy was harvesting and hit one on his tractor,” Hupy says. “Luckily, he just got a concussion from the blast.”

Part of the Red Zone plan involved replanting the area with pine and Norway spruce, trees that can thrive in nutrient-poor soil. By 1935, the department of forestry had placed 36 million seedlings—the beginnings of what has now grown into the Verdun forest. Once the spruce began to mature, orchids followed. In the 1960s, some of these spruce trees were logged and replaced with swaths of European beech trees, which are native to the region. And some of Verdun’s agrarian past still pushes through. “Sometimes you’ll wander through the forest and see an apple tree,” Hupy says, referring to the descendents of 19th-century orchards that once sprawled across the land.

Now, more than 100 years after the battle, Verdun is a biological hotspot, even if much of the wildlife there today wasn’t in residence before the battle. De Matos Machado is careful not to call these newcomers invasive species; he prefers the term “obsidional,” which means related to a siege or war.

The most colorful of these creatures—and the hardest to spot—are the yellow-bellied toads, which occupy seasonally flooded craters that remain in the forest floor. De Matos Machado first encountered a yellow-bellied toad in March 2016. “I was so happy to meet him,” he says. “It was fantastic. He was very small. He was staying cool in the water.” Other species live in these unusual puddles, including palmate and smooth newts.

The ecosystem of Verdun is an interesting pastiche that reflects its unusual history. Patches of the forest bloom with Sisyrinchium montanum, or American blue-eyed grass, which stowed away as seeds on the hooves of U.S. Army horses that came through Verdun. Many other nonnative flowers bloom around the official Verdun cemetery, from the bouquets that mourners laid on graves, de Matos Machado says. Still others were introduced intentionally. On the German side, for example, small whorls of intense blue pop up, flowers of the gentian plant, which German soldiers used to make spirits.

For the most part, Verdun’s new fauna is thriving, the researcher says. But increasing numbers of tourists—seeking both memorials and nature—can pose certain threats. People have traveled to Verdun since 1918, when hostilities on the Western Front ended. During the centenary celebrations of World War I, more than 500,000 may have come to the site, Hupy and de Matos Machado write in a chapter of Collateral Values: The Natural Capital Created by Landscapes of War. Today the forest also offers leisure, recreation, and equestrian paths (all in areas declared safe and clear of ordnance).

Places that are still dangerous attract visitors, too, often for the wrong reasons. “There are lots of artifacts in the Verdun forest, both shells and other materials from war,” de Matos Machado says. “Some looters try to dig inside the forest to sell this material on eBay or Amazon.” Aside from disturbing human remains and endangering the looters themselves, this activity also troubles bats nesting in abandoned bunkers and safehouses. In 2013, researchers mapped Verdun with lidar to see the ground surface below the vegetation. Hupy cautioned de Matos Machado not to share it, as it provides a perfect target list for would-be artifact-hunters.

Verdun is also under siege by an entirely oblivious enemy: the spruce beetle, the biggest killer of mature spruce trees, which still make up a third of the forest. With warming winters as a result of climate change, the beetles are not dying off in the cooler months, and are therefore wrecking the remaining spruce groves, Hupy says. The best way to stop the outbreak would be to remove the spruce trees, de Matos Machado says. But that’s not an easy solution, logistically or spiritually. “It comes down to the question, is this a war memorial or a treated [managed] forest?” Hupy says.

Still, Verdun remains a remarkable refuge for its motley crew—wildlife that turned an abandoned battlefield into an opportunity. Hupy likens Verdun’s afterlife to the Ray Bradbury story “A Sound of Thunder,” which examines the “butterfly effect”—the conjecture that a minor event in the past can drastically change the future. “The way I look at Verdun, you have these environments that have entirely diverged from what they were meant to be,” Hupy says. “But still, there is life.”

* Correction: The original version of this story referred to hundreds of millions of unexploded shells. It may not have been quite so many.

How a Master Mezcalero Makes a Unique Venison Mezcal

The Golden Fourteen were largely forgotten—but a few veterans and descendants could change that.
wwi

The five-day fever was made famous during World War I, but has been a constant companion of poor hygiene.
museums

The Soviet leader's home country is a battleground for dueling interpretations of history.
Video

2:40
Want to see fewer ads? Become a Member.
From Around the Web
Atlas Obscura Trips
City of Blooms: Floriculture in Paris
View This Trip
Thanks for sharing!