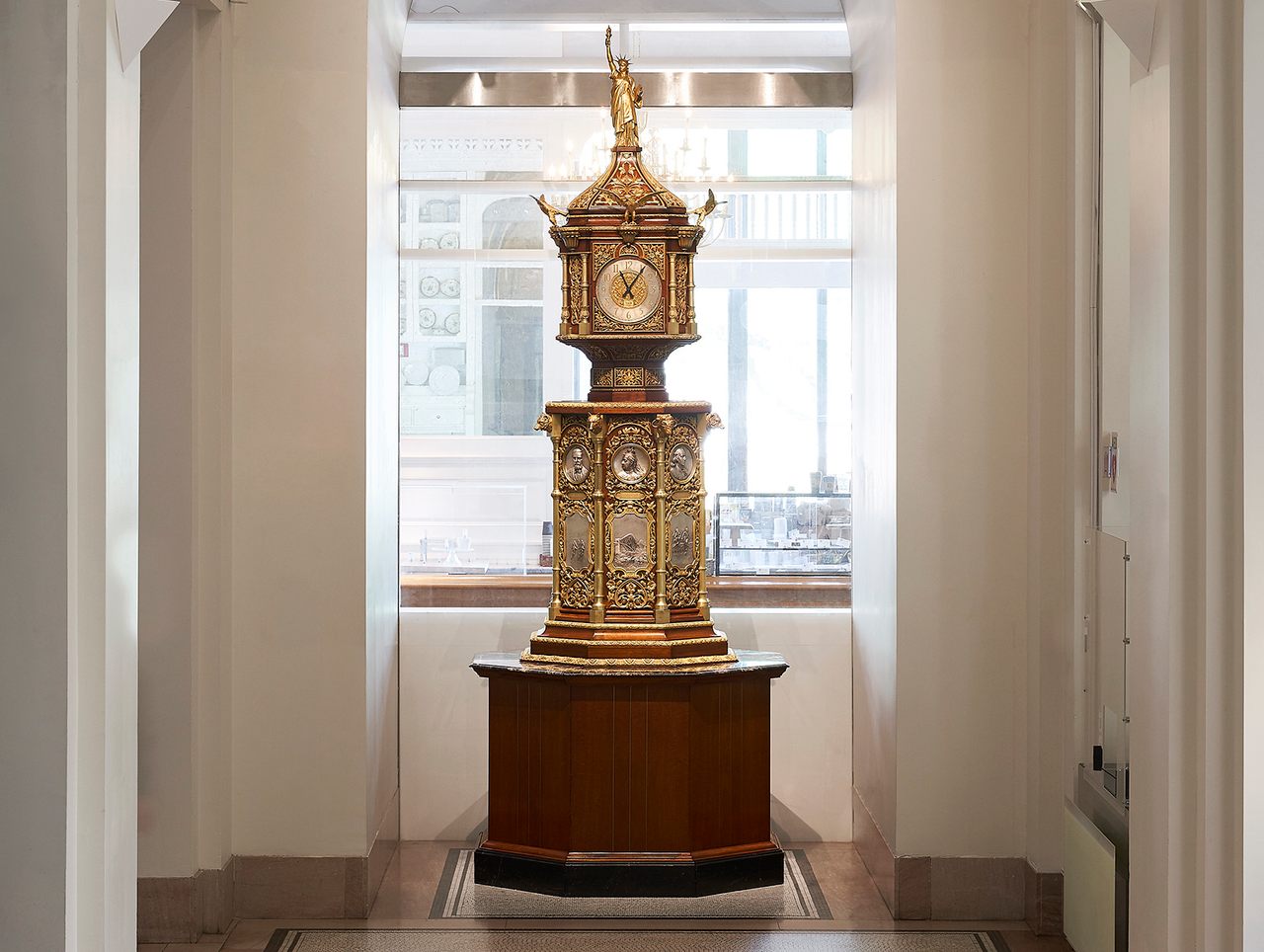 The restored clock is currently on display at the New-York Historical Society. It will reclaim its place in the lobby of the Waldorf Astoria when renovations on the hotel are complete. Courtesy Optimist Consulting
In This Story
Place

The Chicago Saturday Evening Herald announced it to be a “gigantic and stately achievement” and “the handsomest conceivable memorial to our grand exhibition.” The achievement in question was a timepiece, but not just any old clock. It was ornate, 11 feet tall and weighing nearly two tons, carved from American walnut embellished with silver-plated reliefs and golden figurines. The Exposition Clock, as it was known, had been commissioned by Queen Victoria as a gift to the United States on the occasion of the 1893 World’s Columbian Exposition in Chicago. The four-faced clock with an intricate mechanical movement was adorned with images of American presidents, athletics, architecture, and agriculture, all topped with a gilded Statue of Liberty. Below the clock faces, a row of sports-themed statues rotated, and on the hour, its chimes tolled both the English and American national anthems. “This marvel of horological art” was a testament to the workmanship of one country and a celebration of the culture of another.

But more than 125 years later, when the clock arrived at Stair Restoration’s workshop in upstate New York, head restorer Nigel Thomas offered a less glowing take. “There was quite a lot wrong with it,” he says. Over the next year it would be the job of Thomas and a team of five cabinetmakers and polishers to restore the clock to its previous glory.

Though the enthusiastic reporter at the Chicago Saturday Evening Herald had hoped that the clock would become a permanent fixture in the Second City, it instead became an icon of New York. At the close of the fair, magnate John Jacob Astor IV purchased the clock for display in the new hotel he was building; the Astoria would rise next to the Waldorf, at Fifth Avenue and 34th Street in Manhattan. The two hotels could have been rivals—owned by feuding factions of the wealthy family—but a truce was struck, and a grand corridor was built to connect the two buildings. By 1897, when the two hotels opened under the same management as the Waldorf-Astoria, the Exposition Clock was installed in the new Astoria building.

The clock would have been thrilling to guests, says Debra Schmidt Bach, curator of decorative arts for the New-York Historical Society, and not just for its artistry. “This was a time period when people didn’t have personal watches and timepieces in the way that we do now. Keeping accurate time and having everyone know the time was a relatively new phenomenon,” she adds. (It was rumored that George Boldt, the Waldorf-Astoria’s ever-thoughtful manager, kept the hotel’s clocks running a little fast, to ensure guests would not miss their trains.)

The magnificent clock quickly became a social hub for the hotel and a meeting place for New Yorkers. It stood for three decades at the hotel’s original location and, when that building was demolished in 1929 to make way for the Empire State Building, the clock was one of the few items to earn a place of honor in the hotel’s new home on Park Avenue. It remained there until 2017, when the Waldorf Astoria (which had, by then, dropped its hyphen) closed for renovation.

“A lot of hands have touched it over the years,” says Thomas. Visitors who ran curious fingers over the intricate design and well-meaning hotel employees who used harsh cleaners to remove those fingerprints had unintentionally stripped the bronze work of its gilding. To restore those surfaces, created through a process called ormolu, Thomas and his colleagues mimicked the patina they found on undamaged surfaces higher up and inside the towering clock.

Perhaps more nefariously, pieces of the clock had gone missing over the years. Thomas speculates that someone may have stolen some of the animal heads that adorn the central section. Only one original wolf head remained out of three. The missing heads had been replaced with poor reproductions of other animals. The restorers were able to recast the absent animals and reposition wolf, bear, and buffalo figures to match the original.

The clock had also gone through countless repairs and renovations over the years. Some were technical; the original mechanical clockwork, about which little is known, had long ago been replaced by an electric mechanism. (Connecticut-based About Time undertook the current update of that portion.) Others were a matter of taste. The base of the clock has been modified several times. The original was a small, simple plinth. At some point, the clock was raised to its current height of almost 14 feet with the addition of a banquette that allowed guests to sit around the clock. Later—probably during the Art Deco period, Thomas suggests—the banquette was forsaken in favor of an octagonal structure with mirrors. Finally, the current wooden base was built to cover the mirrors.

The restorers excavated lost portions of this history as they disassembled the clock for restoration. For example, they saw the banquette was navy blue because some fabric remained inside the base. Though the original plans had been lost, the restorers could rely on a few—but not a lot—of photos and descriptions of the clock as it first appeared at the Exposition and in the original hotel. There is little record of the alterations that were made over the decades. That actually left Thomas at a loss to explain when—and why—the interior support structure of the clock had been removed. The first job of the restorers was to rebuild this to make sure the clock wouldn’t topple under its own weight.

In 2020, the finished clock—all two tons of it—was transported to the New-York Historical Society, where it will be on display until the completion of the ongoing Waldorf Astoria renovation, likely in 2023. Against the backdrop of Manhattan, visible through an arched window, the clock is luminous. The American walnut gleams and the gilding again sparkles.

The restored clock is not an exact replica of the one that wowed crowds in 1893 or at the first Waldorf-Astoria. For one thing, the restorers chose not to reproduce the series of sports figurines under the clock faces, which went missing long ago. The mechanical magic that made them parade around was surely impressive, but little information on the original statues remains, making it impossible to replicate them.

Whenever possible—even on the interior of the clock, which few will ever see—the restorers were committed to replicating as much of the historical design as they could. But restoration is as much art as science, and when evidence is scant, instinct must fill in. For Thomas, the biggest decision was the final one: how Lady Liberty should be positioned atop the clock, which would determine which of the four faces was the “front.”

“The last part of the puzzle was which way she should face, because there were two positions on the original block,” Thomas says. With elaborate detail on all four sides, there was no obvious front. Thomas considered the clock and made his choice. “There is a plaque of Queen Victoria, whom the clock is a gift from,” he says. Her image sits amid a circle of well-known American men—George Washington and Benjamin Franklin among them. “I made her the front because she was the only lady on there,” so now Lady Liberty has joined her, facing the same direction.

Join us for a daily celebration of the world’s most wondrous, unexpected, even strange places.
hotels

"If you build it, they will come."
mechanical instruments

Long Abandoned Clock Tower is Returning to Life in Queens