The Researchers Bringing 'Uniquely Australian Foods' to Stores Near You - Gastro Obscura
Want to see fewer ads? Become a Member. 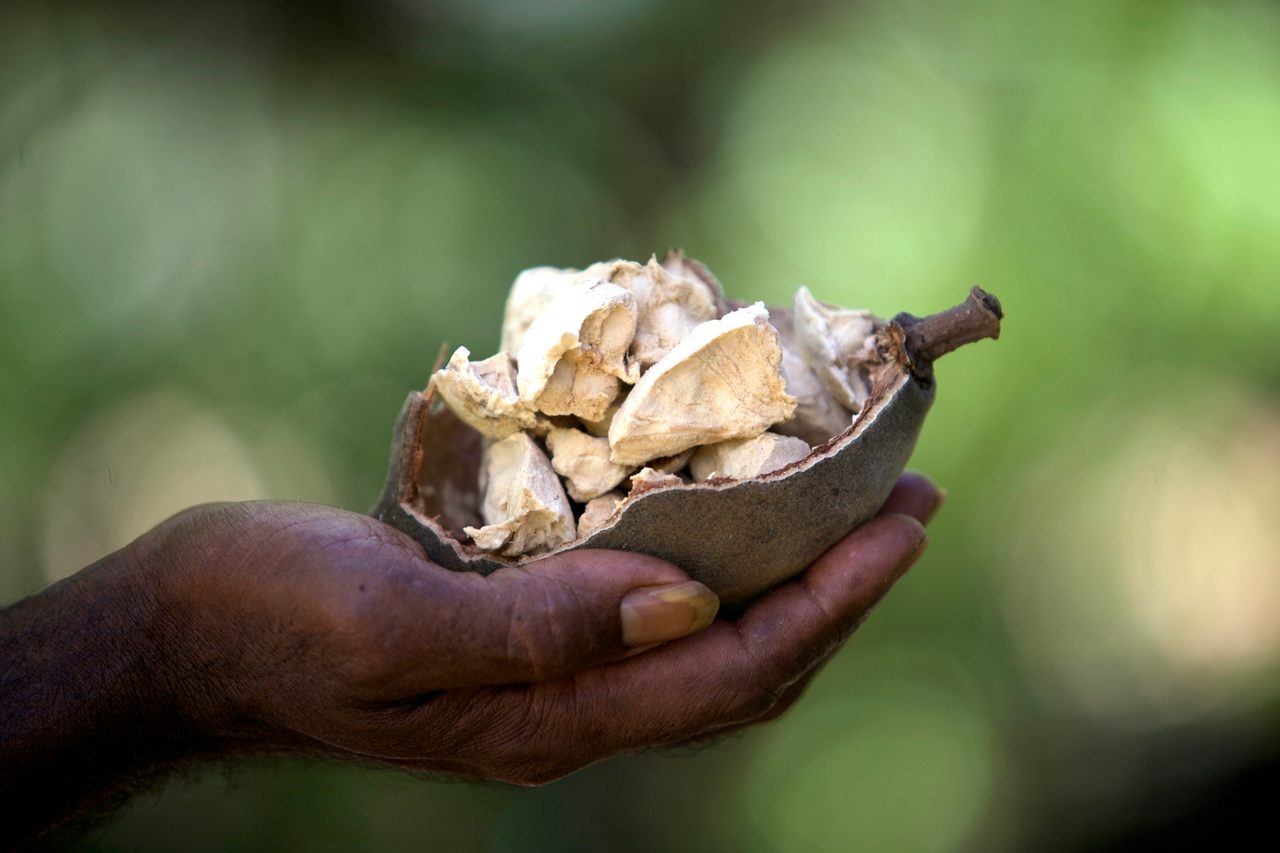 The inside of a boab nut, a versatile source of food in the Kimberley. Ingetje Tadros/Getty Images
In This Story
Destination Guide

It is a spectacle etched into Robert Dann’s memory. When the sun sets on the Kimberley, it almost looks like the earth is bleeding. Warm rays of light strike the ground at a sharp angle, deepening the color of the unique red soil for which this region of Western Australia is renowned. They also silhouette another icon of the wildest corner of a wild country: the bulbous trunk and spindly branches of the boab tree.

Since he was a child enjoying the natural splendor of the Kimberley, Dann, who is Indigenous Australian, has been fascinated by the boab. He never thought of this tree as particularly unusual, as it’s easily overshadowed by the region’s giant gorges, world-famous reefs, towering sea cliffs, thunderous waterfalls, and remarkable rock formations. Instead, he was intrigued by the versatility of the cantaloupe-sized nuts that hang from the boab’s branches.

Indigenous people in this remote area of northwest Australia pluck these nuts to create satisfying treats. “As a kid, when we wanted some food, we’d go looking for a boab,” Dann says. “When we found one, we’d be happy because we knew we were getting fed.” They would take the boab nuts home, remove their rough, green-brown skin, break up their white kernels, and boil them in a pot.

If they were thirsty, they would create a broth, then cool it down to make a drink similar to ice tea. If they were hungry, they would add less water and make a thick paste, similar to porridge, then add sugar and eat it from a bowl. Now, decades later, 50-year-old Dann has turned these boab recipes into a business. Under the brand Bindam Mie, he is selling Boab-nut-infused drinks with the help of an Australian university center that aids Indigenous communities making money from native foods.

In May last year, The University of Queensland and the Australian Research Council launched the Training Centre for Uniquely Australian Foods. Its aim is to expand the scope of Australia’s native food agriculture business, creating new cash crops in Indigenous communities.

Many of these communities suffer from high unemployment rates, particularly in remote areas without access to education, job training, and employment opportunities. This is a legacy of Britain’s colonization of Australia. The British designed modern Australia to mirror their own society and, in doing so, they created education and employment systems that were foreign—and often outright hostile—to Indigenous Australians, and greatly undervalued their traditional knowledge, skills, and culture.

The center, meanwhile, aims to harness those very things. The farms it is helping establish will be owned and operated by Indigenous people, with all profits spread through their communities. The center has a team of researchers who variously specialize in natural science, social sciences, and law, and work with an Indigenous enterprise group, of which Dann is a member.

One of the world’s oldest civilizations, with a history stretching back at least 60,000 years, Australia’s Indigenous people have a cuisine consisting of some 5,000 native food species. Yet only 18 of these species have been commercialized.

Because Australia is so vast yet sparsely inhabited—similar in land area to the contiguous United States, but with 1/13th of its population—there are swathes of the country scientists have yet to investigate. The center aims to correct this by identifying nutritious native foods with commercial appeal not yet studied by scientists.

One of the Centre’s first successful collaborations with an Indigenous community came from scientists seeking out one plum and being introduced to another. While researching the Kakadu plum, they were told about a green plum now being hailed as a “super food.” It could become a key source of income for Indigenous communities in Arnhem Land in Australia’s Northern Territory.

Arnhem Land was an obvious location for the centre to search for unstudied native foods. It is roughly the same size as the state of New York, yet is home to just 16,000 people, most of whom are Indigenous. The center’s director, Associate Professor Yasmina Sultanbawa, says that while her team was researching the well-known Kakadu plum, Indigenous people introduced them to a superior plum they’d been eating for 53,000 years.

Now these scientists are working with the Indigenous-owned Gulkula nursery in Arnhem Land to examine the plum’s nutritional properties and commercial value. Dr. Sultanbawa says it is one of the healthiest native foods ever discovered in Australia. It had particularly high levels of folate, a B-vitamin that is valuable for pregnant women and infants.

“Of all native foods we’ve tested, the green plum has the highest folate, on par with conventional fruits like durians and strawberries which are really known for being rich in folate,” Dr. Sultanbawa says. “It also has a good amount of dietary fiber, is high in protein, and has lots of minerals like magnesium, potassium, and phosphorus. We think it’s one of the healthiest known fruits in the world. But it’s also delicious. It tastes a bit like a pear.”

Although the green plum is not yet ready to be sold, investors are interested, she says. It could be used as a fresh fruit or as a freeze-dried powder to add flavor and nutritional value to products such as muesli bars and cereal.

Dr. Sultanbawa says the center wanted to help produce and sell native food products while utilising Indigenous knowledge. “A lot of species we work with grow within the land owned by Indigenous communities who have a tremendous understanding about how they are grown and best used,” she says. “This traditional knowledge must be respected. We have to protect their intellectual property, and ensure there is benefit sharing.”

This is how the Centre aims to differentiate itself from other Australian ventures that have exploited Indigenous resources and knowledge, with limited direct benefit to Indigenous communities. The center currently assists several Indigenous communities in the wild harvesting of the Kakadu plum, with up to 25 tons of this fruit yielded per year. Possessing the highest natural Vitamin C content of any fruit in the world, it is commonly sold as a powder used in smoothies, juices, protein shakes, yoghurts, and cereals.

These Indigenous communities have ownership of the supply chain, Dr. Sultanbawa explains. “They do all the harvesting, the freezing, then an investor negotiates with the community about prices and the community decides on any deal,” she says. “The Centre helps educate them on how to handle these deals and then their community leaders make decisions about how to disperse all funds through the community.”

Dann’s business has flourished with help from the center. His Bindam Mie brand produces peach, lemon, and original-flavored boab ice tea, which he sells directly to buyers via his website and also in stores throughout Western Australia. He says customers appreciate the natural ingredients of these drinks—nothing but water, boab powder, fruit extract, and organic agave nectar. Bindam Mie also sells boab ginger beer, boab powder, and boab syrup.

Prior to starting this business three years ago, Dann’s only commercial experience with native foods was collecting Kakadu plums, which he and a friend would sell to a health-food company. Now Dann is creating employment opportunities for Indigenous Australians in the Kimberley, paying them $14 per kilogram for the boab nuts they gather from the wild.

“It feels really good to see Indigenous people getting a proper chance to make a bit of money from our native foods,” he says. “There’s so many amazing native foods that really no one else knows about, only us [Indigenous people]. Now we’re starting to show them to the world.”

The Delicate Art of Identifying Bats By Their Penis Bones

Conservationists should look to Indigenous history to fix the future.
science

The Scotty Creek facility was part of an unprecedented First Nations effort to study and save the Arctic. Then the fire came.
science

Farmers and foragers set up at sunset to sell hundreds of species valued in traditional medicine and ritual.
science

Hint: It involves way less meat than you might think.
Video