Biocrusts Are an Entire World Beneath Our Feet - Atlas Obscura
Want to see fewer ads? Become a Member. 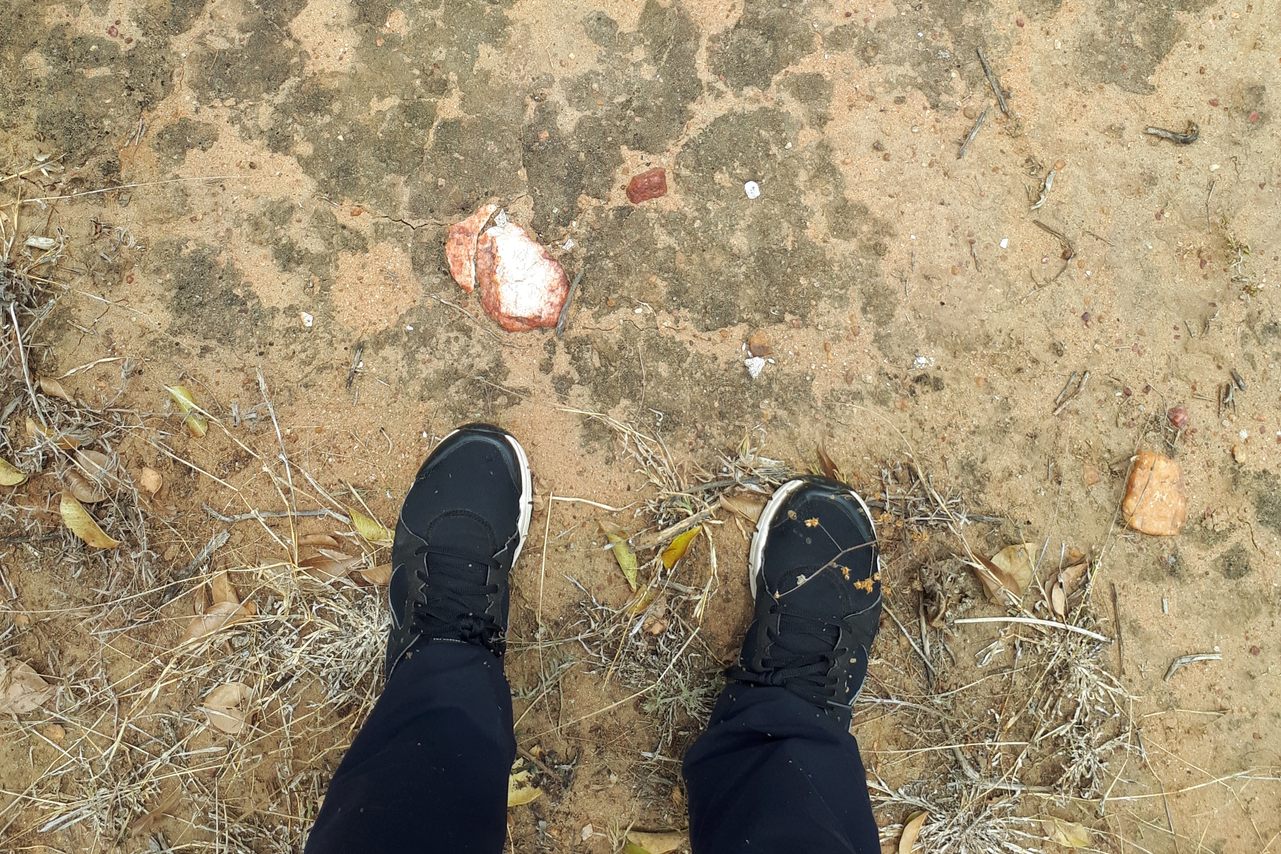 The slight crunch underfoot is a biocrust—critical to healthy ecosystems. Courtesy Náthali Machado de Lima
In This Story
Destination Guide

A few decades ago, a team of scientists reported in Nature that life on land is possibly over a billion years older than previously demonstrated. Their evidence came in the form of a chunk of ancient soil, or paleosol, that contained what they believed were once “mats” of microbial life, maybe including photosynthetic cyanobacteria (sometimes called blue-green algae).

These microbial mats, researchers have noted, could be interpreted as an early record of a biological crust, or “biocrust.” Though there’s no consensus on exactly when biocrusts first appeared, over time these easily overlooked patches of life—a kind of “living skin” of the planet—have come to be recognized as critical to healthy ecosystems, and new research is illuminating just how distinct and diverse they are.

Biocrusts are “interwoven communities” of cyanobacteria, algae, other bacteria, lichens, fungi, mosses, and microarthropods (i.e., tiny insects), explains Náthali Machado de Lima, a postdoctoral scholar at the University of New South Wales in Australia, who led the new research. “Crust,” really, is the most visually and aurally accurate term for these communities, since they occur in the top bit of the soil, and might produce a subtle crunch underfoot.

Biocrusts were “around before vascular plants, like grasses, trees, and ferns,” says Matthew Bowker, a soil ecologist at Northern Arizona University who was not involved in the new research. Today, “They seem to hang around more stressful places where vascular plants can’t really hang out,” like very dry or very cold environments. They do important ecological work, such as stabilizing the soil, determining how much water it retains, and contributing to the cycling of carbon and nitrogen.

Biocrusts make up an estimated 12 percent of the Earth’s land surface, according to a 2018 study in Nature Geoscience, and though they can tolerate extreme environments, they’re still vulnerable. Climate change, alongside other human impacts—such as urban sprawl and agriculture (as well as the occasional crunching underfoot)—are pushing them toward a possible 25 to 40 percent reduction in the next several decades. That same 2018 study suggested that threats to biocrusts could cause a number of environmental changes, including the release of a lot of dust. (In parks in the American Southwest, signs like “Don’t bust the crust” warn hikers not to veer off the trail.)

Last month, Machado de Lima and her colleagues published a study in the journal Geoderma that examined the cyanobacteria in biocrusts from sites in two different areas in Brazil.

“Brazil is a huge country, and we have many different climate scenarios, rainfall regimes, it varies a lot,” says Machado de Lima, who hails from São Paulo. One of the two biomes they studied, caatinga, in northeast Brazil, is a richly diverse dryland that’s at risk of desertification, she explains. The second biome, pampa, in the country’s south, is known for its grasslands and is also under human pressure, particularly of the agricultural variety.

Researchers know a lot about biocrusts in, for example, Europe (where there aren’t that many biocrusts). But funding limitations, and some other factors—such as harsh, remote working conditions in caatinga, Machado de Lima explains—could help explain why biocrust cyanobacteria in these parts of Brazil aren’t well understood. By comparing the biomes, the scientists are looking into the microbial building blocks of two ecologically important places.

For the study, the team took samples using a hole saw, and then took them to the lab for microscopic and genetic analysis. Of all the intersecting lives that come together to create a biocrust, cyanobacteria generally show up first, says Machado de Lima, not unlike how coral colonizes a bare area to pull reef ecosystems together. They’re an important piece of the puzzle (though perhaps not always beloved; a character in Johann Wolfgang von Goethe’s Faust referred to a species of terrestrial cyanobacteria common in biocrusts as “disgusting gelatinous dirt”). Certain “filamentous” species of cyanobacteria, which can look like loose strands of rope—or tightly beaded necklaces, if you’re feeling elegant—under a microscope, become entangled with soil particles, forming a welcoming setting for other creatures.

In caatinga and pampa, “we found a completely different composition,” says Machado de Lima. Caatinga sites, for example, had a higher proportion of the genera Scytonema, which produces a sunscreen-like compound that protects it from solar radiation. “We also found differences inside the same biome, among the sites,” she says, which underlines just how rich these microbial worlds are.

This new research highlights the role that biocrusts play in areas that aren’t really considered deserts, which is where biocrusts are more commonly studied, says Ferran Garcia-Pichel, a professor in the School of Life Sciences at Arizona State University who was not involved in the new research. The study also shows that “there is a lot of diversity in species compositions within those ecosystems,” he says, and that those compositions are somewhat different than what we’re used to seeing in deserts.

As a foundational if largely invisible aspect of these ecosystems, understanding biocrusts could be key to restoring degraded areas.

“Maybe in the future, we can restore this area with the right organisms,” says Machado de Lima. “It’s very important to know the exact composition that you have in the area that you want to restore.” Cyanobacteria that are abundant in a desert in the United States, she says, might not cut it in caatinga.

Biocrusts serve as a reminder that the landscape beneath our feet can be just as vast and fascinating as the world above them. Filled with beautiful, twisty strands of life, these miniature, diverse, crunchy communities are as easy to forget as they are important. So if you find yourself in biocrust territory, stick to the trail and watch your step.

Your Water Heater Is an Extreme Environment

Microbes that thrive under the harshest conditions are making themselves right at home—in our homes.
science

Embryos of one of the world's most unusual amphibians become art in the eyes of a biologist and wildlife photographer.
Video • PinDrop