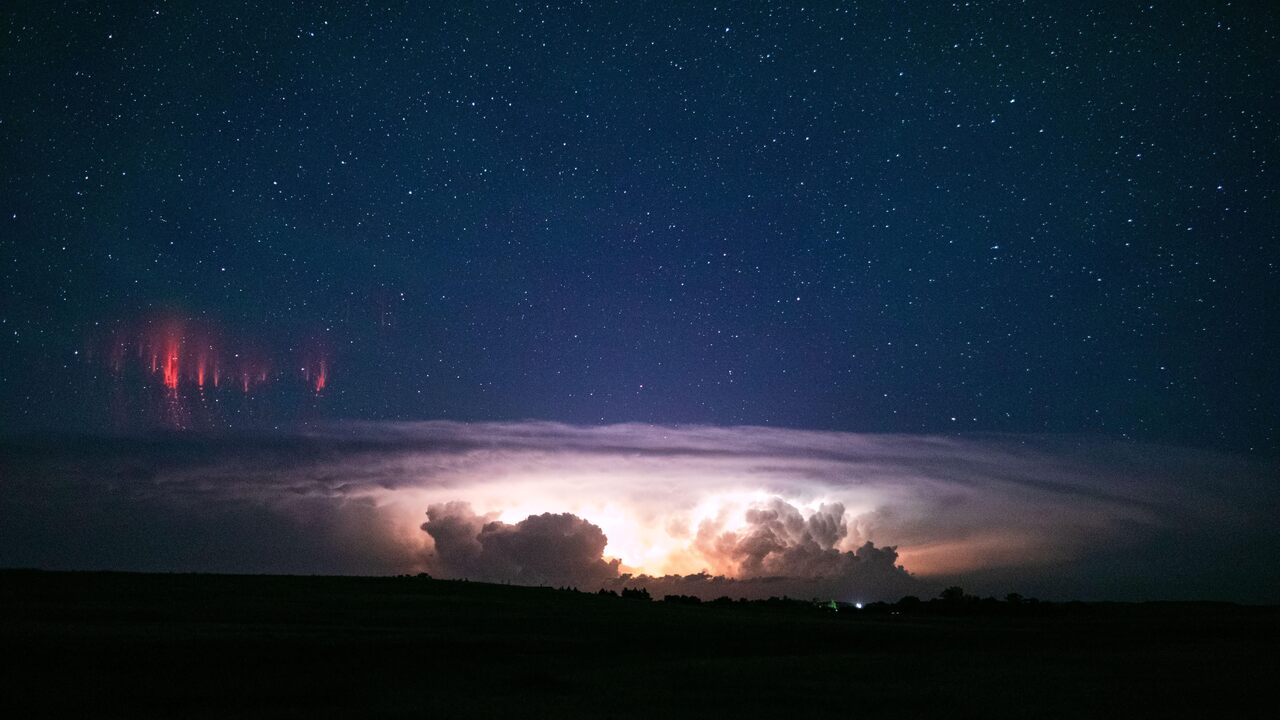 When red sprites, pictured here above Nebraska, are accompanied by a diffuse, dome-shaped glow, it can look like a jellyfish is hovering in the sky. John Sirlin/Alamy
In This Story
Destination Guide

In the early morning hours of July 2, 2020, something beautiful and strange was brewing in the sky over western Texas. A forceful storm had built, and a little after 1:30 a.m., a Nikon Z6 camera at the McDonald Observatory, in the Davis Mountains, spotted a reddish-pink formation on the horizon, some 100 miles to the southeast. It was searingly bright and seemed to have dangly bits, like gossamer tentacles on a sea creature decked out for a rave.

The sight was a jellyfish sprite—a type of transient luminous event, or TLE, that visits stormy skies for just a split-second. TLEs are products of the crackling electrical activity that accompanies big, busy thunderstorms. “There must be a fairly large thunderstorm, a real lightning factory, somewhere for jellyfish sprites to be produced,” says József Bór, a researcher at the Research Centre for Astronomy and Earth Sciences at the Hungarian Academy of Sciences.

These flashes are one in a motley menagerie of sprite types. In the spirit of their whimsical, folkloric counterparts, sprites can assume many beguiling shapes, including wishbones, trees, and carrots. The jellyfish sprite’s ethereal-looking “wisps” are often embedded in another type of TLE, known as the sprite halo, Bór says—that’s what forms the diffuse glow that evokes the jellyfish’s dome-like bell.

These sprites occur in the mesosphere, about 50 miles above Earth’s surface, and sprawl high and wide. “The whole sprite event is actually a huge electric spark which develops in a background electric field above the thunderstorm,” Bór says. He says that field is caused by an electrical imbalance that occurs in the aftermath of powerful lightning. Jellyfish sprites can be dozens of miles tall and across, Bór says, and each “tendril” may be nearly 1,000 feet in diameter. “Jellyfish sprites are really huge events,” he says.

Their party-ready color is a product of the way they energize molecules in the atmosphere. “Regular lightning is really, really hot and energizes everything so much that almost all wavelengths of light are generated, making it white,” says Steven Cummer, a professor of electrical and computer engineering at Duke University whose research includes lightning and sprites. “Sprites are much lower energy, and thus only energize a few different molecules in air. The red color comes from energized nitrogen gas in the atmosphere.” At lower altitudes, blue light makes them look purple.

Sprites are not that unusual, but, like their mythic namesakes, many are elusive and evade Earthlings’ notice. They’re only visible for a few milliseconds, according to NASA’s Earth Observatory, and are usually spotted late at night. (Even if they happened during the day, it would be “impossible to notice them in the much stronger daylight,” says Bór, who studied 489 that lit up the skies over Central Europe between 2007 and 2009.) Because they form above a storm, clouds often blot out the view. An active thunderstorm might produce only a few sprites. Even a storm with superlatively sprite-friendly conditions might only lead to 100 or so, and because jellyfish sprites are produced by the “the strongest of the strong lightning strokes,” Bór adds, they’re rarer.

Jellyfish sprites are often produced in the types of big storms that pummel the midwestern United States, northern Mexico, and central South America, Cummer says, and are visible from slightly higher altitudes, such as the eastern Rocky Mountains. “You can see them pretty much all over the world when conditions are right,” he adds—but blink and you’ll miss them.

To maximize your chances of a sprite sighting, you’ll have to be pretty far away—124 to 186 miles away seems to be about right, Cummer says—and luck out with sparse clouds and a clear view of the area above the storm. “The chance to watch red sprites is the highest under clear, starry night sky with intense thunderstorms rumbling far away,” Bór says. But even then, they require a keen eye. “If you didn’t know what you were looking for, you might just think you were seeing things,” Cummer says.

“We want to continue triggering lightning. We’re in no way done with that.”
science

Americans Have Planted So Much Corn That It's Changing the Weather

The Corn Belt is making it rain.
science

Only now do scientists fully understand just how strong a 1972 solar storm was.
Video • PinDrop

It not only looks cool, but also helps scientists better understand lightning rods.
Read more
Thanks for sharing!