The Soup That Stopped a War - Gastro Obscura
Want to see fewer ads? Become a Member. 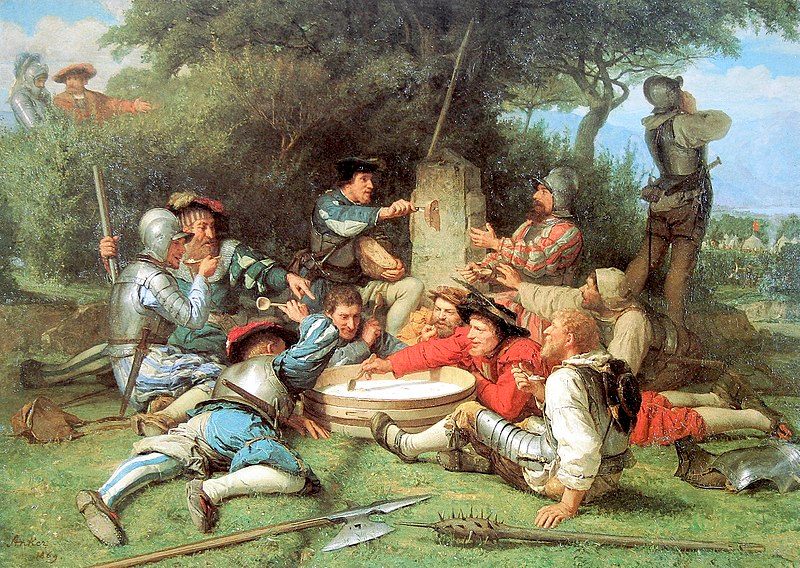 Albert Anker's 1869 "Die Kappeler Milchsuppe" teaches us how to share soup with our enemies without crossing a battle line. Public Domain
In This Story
Destination Guide

The First War of Kappel divided the idyllic Swiss countryside, pitting neighboring cantons against one another in armed religious conflict. Like in most intra-Christian conflicts of the Reformation, men were prepared to spill blood over theological differences. Unlike any war in history, however, it was over before it even began thanks, perhaps, to an iconic pot of soup.

Could a single soup pacify two battle-ready armies? “The milk soup is a legend,” Dr. Georg Kreis of the University of Basel flatly told Great Big Story. But it still resonates today, and the story of the soup’s role in resolving conflict is deeply rooted. In 1564, prominent Protestant pastor Henrich Bullinger wrote of the episode, “With [one] part on our own soil, we ate the milk [together].”

On June 10, 1529, Protestant forces from Zurich and Catholic forces from Zug met on a field in Kappel am Albis that’s today known as Milchsuppestein, or “milk-soup pasture,” to battle over the administration of disputed territories. While the infantries squared off, Hans Aebli, a local magistrate, mediated between rival leaders off-site to negotiate a peace deal. Tired and hungry from a long march, the opposing armies began to disarm and fraternize. Eventually, the legend goes, soldiers pitched a giant soup pot in the center of the battlefield: the Catholics brought milk, the Protestants bread. The crossing of spoons over the inaugural bowl of Kappeler Milk Soup eased tensions long enough to give negotiators time to arrive at a peace deal two weeks later.

Ultimately, war did resume. Several years after their soupy truce, a food embargo (of all things) imposed on Catholic cantons by Zurich brought the opposing forces back to the battlefield. The violence of the Reformation raged on, despite a mutually displayed love of soup.

Today, the site of the bloodless battle is memorialized by the Kappeler Michsuppenstein monument. It stands beside the town monastery, atop a hill overlooking Lake Zug. A famous 1869 painting by Albert Anker, considered Switzerland’s “national painter,” in Zurich’s Kunsthaus Museum depicts the scene: Opposing forces laze around an oversized soup bowl, weapons strewn about them while supping on their peace-making potage.

Milchsuppe itself was embedded in the Swiss national psyche, a fitting symbol for a country with a reputation for neutrality and compromise. Susanne Wey-Korthals, retired Swiss pastor of Kappel Abbey and a part-time historian, told the BBC, “All countries polish their history a little, and we’ve done the same—we’ve turned the soup into a national icon.”

In 2006, Councilor Pascal Couchepin was tasked with mediating a long-standing dispute between two Swiss cities: Protestants from Zurich plundered the Abbey of St. Gall during the 1712 Toggenburg War, claiming countless artifacts, manuscripts, and globes. At the luncheon celebrating the signing of a restitution deal in 2006, Couchepin underscored the closure by serving Kappeler milk soup. In 2017, organizers of “Together to the Middle: 500 Years of Reformation,” an ecumenical event celebrating Swiss Christian unity, held a soup dinner featuring none other than Kappeler milk soup.

The dish is served in restaurants and homes, though less often today. The Swiss ambassador to the U.S., Martin Dahinden, writes in Beyond Muesli and Fondue that although “it often takes time to resolve a disagreement, it [only] presents another opportunity to prepare Kappeler Milchsuppe.” His recipe calls for nutmeg, cloves, and bay leaves, stipulating that while “everyone eats out of the same tureen, [they are] only allowed to eat the bread on their side.”

A priest fights to defend an ancient monastery after a quick, decisive war.
food

The 1970s Movement to Reclaim Pretzels for God

"Pretzels for God" even took as its patron the first Native American saint.
cemeteries

During a siege, desperation drove people to disinter skeletons from cemeteries.
military history

From Italy’s fortress-seizing countess to Angola’s battle-hardened Queen Njinga, these women didn’t back down from a fight.
Video • Gastro Obscura

Featuring a meatless buffet fit for kings, this family-owned Zurich eatery is considered the oldest vegetarian restaurant in the West.
Zurich, Switzerland

A 200-year-old tavern challenges guests to finish a glass of wine while hanging from a ceiling beam.
Genoa, Nevada