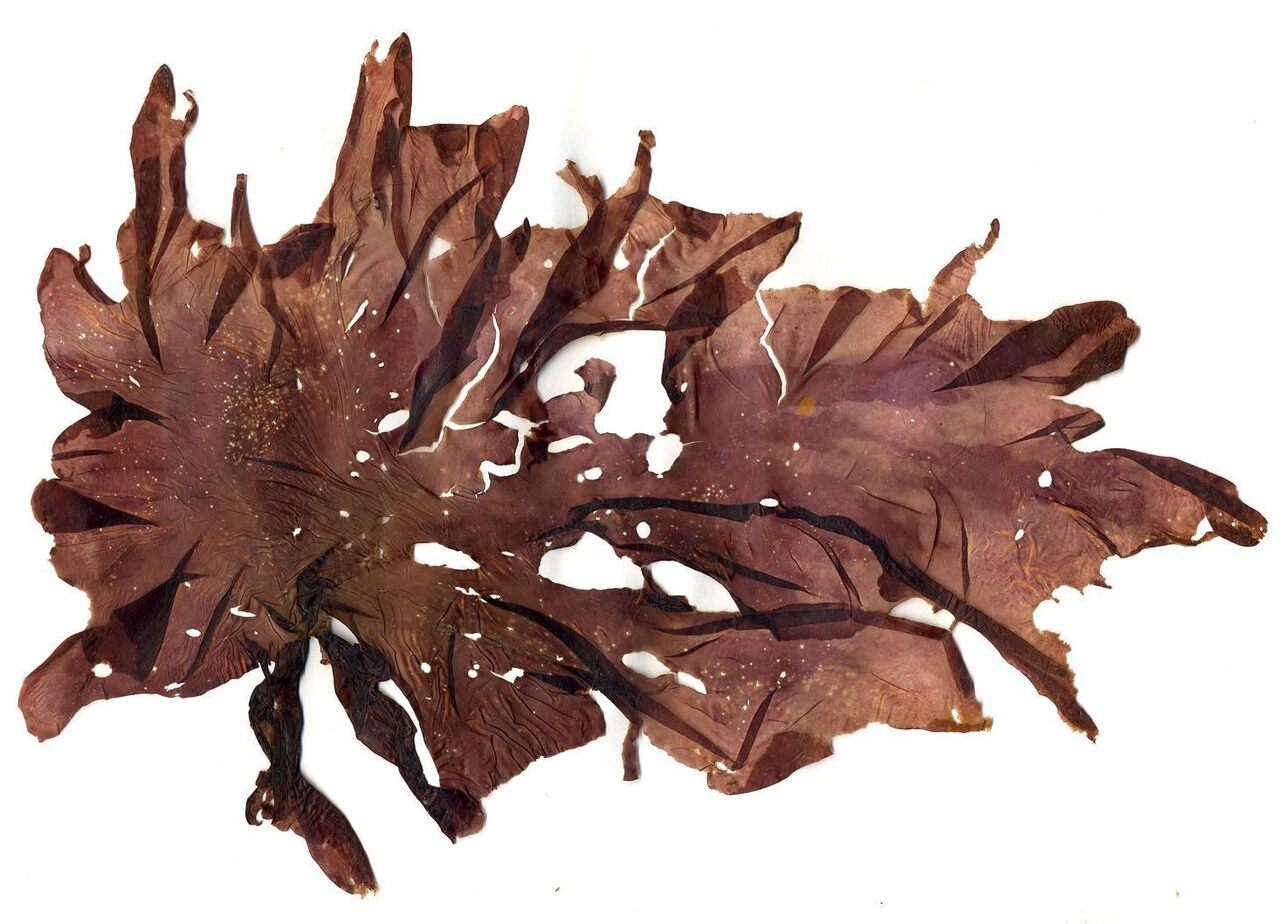 Every year on April 14, the nori farmers of Japan travel to Uto City to celebrate the Mother of the Sea. They assemble by a memorial that overlooks the Ariake Sea, an enormous, fertile bay speckled with the emerald-green grids of seaweed farms. The mother they honor is no celestial figure spun from myth or memory, but rather an unpaid botanist from Manchester. Though she lived halfway across the world, Kathleen Drew-Baker played a monumental role in saving Japan’s multi-billion dollar nori industry.

Nori, the Japanese name for the species of red seaweed known as Porphyra, is used ubiquitously in sushi. Shimmering, crinkly sheets of processed Porphyra are what encircle sushi rolls and cradle onigiri. Porphyra has been a staple of Japanese cuisine for centuries, according to Ruth Kassinger, author of Slime: How Algae Created Us, Plague Us and Just Might Save Us. In the seventh century B.C., people offered seaweeds, including Porphyra, to shrines so that the gods might protect this crucial food source. In the eighth century A.D., fishermen paid their taxes to the emperor in kelp.

Until around 1600, Japanese villagers collected the seaweed simply by picking it from tidal rocks and pools. But in the early-17th century, the shogun Tokugawa Ieyasu accidentally catalyzed commercial production. The shogun demanded that fresh fish be delivered to his Edo palace each day, leading fishermen to build fish-holding bamboo pens in Tokyo Bay that proved the perfect breeding ground for Porphyra. After the fishermen realized the algae thrived on bamboo fences, they constructed commercial farms by sinking twigs in tidal waters and harvesting the seaweed that grew on the wood.

This mass production of Porphyra decreased the price and allowed many more people to consume the algae. Villagers began to depend on the algae for their income as well as a primary stand-alone food source in the winter. It wasn’t until the 18th century that cooks, inspired by traditional Japanese papermaking techniques, began shredding and rack-drying Porphyra into the sheets now known as nori.

Despite these developments, nori had a nickname: gambler’s grass. Year after year, there was never any guarantee that the harvest would be good, despite fishermen’s ample efforts to cultivate the crop. Most years, it unfailingly bloomed in seaweed beds ripe for picking. But some fateful years, the nori would be a no-show, plunging fishermen into a hard, hungry winter.

In 1948, shortly after the end of World War II, the nori disappeared. A series of fierce typhoons—coupled with the effects of pollution and industrialization—had ravaged the coast. Unlike past, unlucky years, this time the nori didn’t bounce back the next year. The timing was terrible, Kassinger writes, as 3.5 million civilians and members of the Japanese military had returned to a country wrecked by war. The country needed all the food it could produce. Japan’s fishing fleet was hard hit by American bombs, and countless fishermen had just lost their only source of income.

But the research needed to revive Japan’s nori had begun 20 years earlier, across the globe in Manchester, England, when Kathleen Drew-Baker was fired. She had been a lecturer in cryptogamic botany at the University of Manchester, but the college did not employ married women. So Drew-Baker was let go after her nuptials in 1928, though the university kept her on as an unpaid research fellow.

At the time, botany was one of the only sciences considered appropriate for women to enter. “Botany was a safe science for women,” Kassinger says. “It was the one that didn’t involve mathematics or cutting things up.” As a cryptogamic botanist, Drew-Baker studied plants that reproduced by spores, such as ferns. “Ferns were a good idea for women to study because they didn’t have flowers and therefore they didn’t seem to involve sex,” Kassinger says.

But Drew-Baker wasn’t interested in ferns, or any other plants a person could find on land. Instead, her obsession lay with the sludgy, slimy weeds that lived under the sea. Known to her friends and colleagues merely as “Drew,” she had a sly wit and approached all her work with an astonishing rigor and zeal. Two phycologists remember a 1923 summer school trip to the Great St. Bernard Pass, during which Drew-Baker rejoiced upon finding a reddish pool in a side valley teeming with unicellular red algae. She promptly filled her thermos with the dusty pink liquid.

By the 1940s, Drew-Baker had devoted her career to red algae, specifically the Welsh Porphyra umbilicalis, a coldwater seaweed known as laver in the United Kingdom. Welsh Porphyra, or laver, was a species related to Japanese Porphyra, or nori. Drew-Baker wanted to solve the mystery of this laver’s strange life cycle, as fishermen had only ever collected the weed in the wild. In hopes of collecting spores, Drew-Baker grew the Welsh Porphyra in a tidal tank in her laboratory. On a whim, she threw some oyster shells to the bottom of the tank. The laver did soon produce spores, but, rather strangely, the oyster shells all developed a pinkish sludge.

Though Drew-Baker first feared her experiment had been contaminated, she soon identified the pink as a species known at the time as Conchocelis rosea. In her experiments, Conchocelis always arrived in the summer months, whereas the Welsh Porphyra popped up in winter months. It didn’t take Drew-Baker long to realize that the two species were actually one.

Drew-Baker published her discovery—“Conchocelis-Phase in the Life-History of Porphyra umbilicalis”—in the 1949 issue of Nature. In the paper, Drew-Baker explained that C. rosea was actually the juvenile sporophyte phase of Porphyra. In the spring, spores from the adult algae did not disappear but sank to the seafloor and settled in the shells of bivalves such as oysters and mussels, soon emerging as pink sludge, or C. rosea. In turn, the pink sludge produced its own spores that settled on bamboo stalks and nets and grew into the familiar, harvestable Porphyra. While the algae’s two-faced life cycle may seem unnecessarily complicated, the C. rosea stage actually allows the juvenile algae to stay protected within shells on the seafloor, safe from rough surf or heat waves. Drew-Baker had no idea of the international implications of her discovery, and continued her research in phycology, or the study of algae.

Luckily, a marine biologist in Japan named Sokichi Segawa picked up the 1949 issue of Nature and was stunned by Drew-Baker’s findings. He realized that Japanese Porphyra likely shared a similar life cycle. During the war, the U.S. military had dropped thousands of underwater mines along the Japanese coastline that obliterated the bivalves dwelling on the seabed, thus denying the young Porphyra sporophytes a home, Kassinger writes. Segawa quickly collaborated with other Japanese marine biologists to replicate a version of Porphyra’s wild home on land, which led to the development of industrial nori production. Gambler’s grass became a guaranteed success, time after time.

With their crop revitalized, the nori fishermen collected enough money to construct a statue of their seaweed savior. But in 1957, before she could travel to sit for the sculptor, Drew-Baker died at the early age of 55. She had never even seen Japan. “She was the first to figure out how this seaweed worked,” Kassinger says. “And without her input, people probably would have died.”

The fishermen, still determined to honor the botanist, instead constructed a memorial for Drew-Baker. It was unveiled on April 14, 1963, writes marine biologist Colin Nash in The History of Aquaculture, in the Sumiyoshi Shuntou Shrine in Uto City. They buried Drew-Baker’s scientific papers under the memorial stone, as well as the university hood and gown she’d worn after her graduation from the University of Manchester. At the unveiling, local fishermen draped the memorial with gifts, including small vases and a hefty daikon. And every year since, nori farmers have graced the memorial with sheets of the year’s nori harvest.

Though much of Drew-Baker’s life remains undocumented, her colleagues remembered her as a generous, groundbreaking woman in a series of obituaries published in the 1958 issue of the European Journal of Phycology. Despite the financial setback she faced as a married female scientist, she managed to raise two children while conducting her own research and training younger botanists. In 1952, she was elected the first president of the British Phycological Society. “Her standards were high, yet her lack of pretension and capacity for friendship ensured that the less gifted or experienced of us never felt frustrated,” wrote J.W.G Lund, the president of the British Phycological Society at the time of Drew-Baker’s passing. “It was enough for her that we too were interested in the algae.”

Though Drew-Baker isn’t widely recognized outside of Japan, two of the microscopes she used in her research are on display at the Science and Industry Museum in Manchester, England. One is a brass Seibert model from the 1920s, and the other is a more modern binocular model from 1950.

So if you’re in Wales, try some laverbread, the pulpy seaweed paste kneaded from wild laver. And if you’re ever in Uto, stop by Drew-Baker’s memorial, smell the salty, weedy scent of the Ariake, and pay your respects to Japan’s Mother of the Sea.

When it comes to battling the climate-damaging gas in belches, a little of the macroalgae goes a long way.
science

New research in Brazil highlights how distinctive the "living skin" of the planet can be.
food

Or even years.
science

From its name, to its hazy origins, to its drug interactions, there's a lot going on beneath that thick rind.
Video • PinDrop

A bronze sculpture of a monkey sits outside this factory, which has made an anise-flavored liqueur for over 150 years.
Niigata, Japan