The Secret Life of 'Sea Pork,' The Organ-Like Blobs on Your Beach - Atlas Obscura 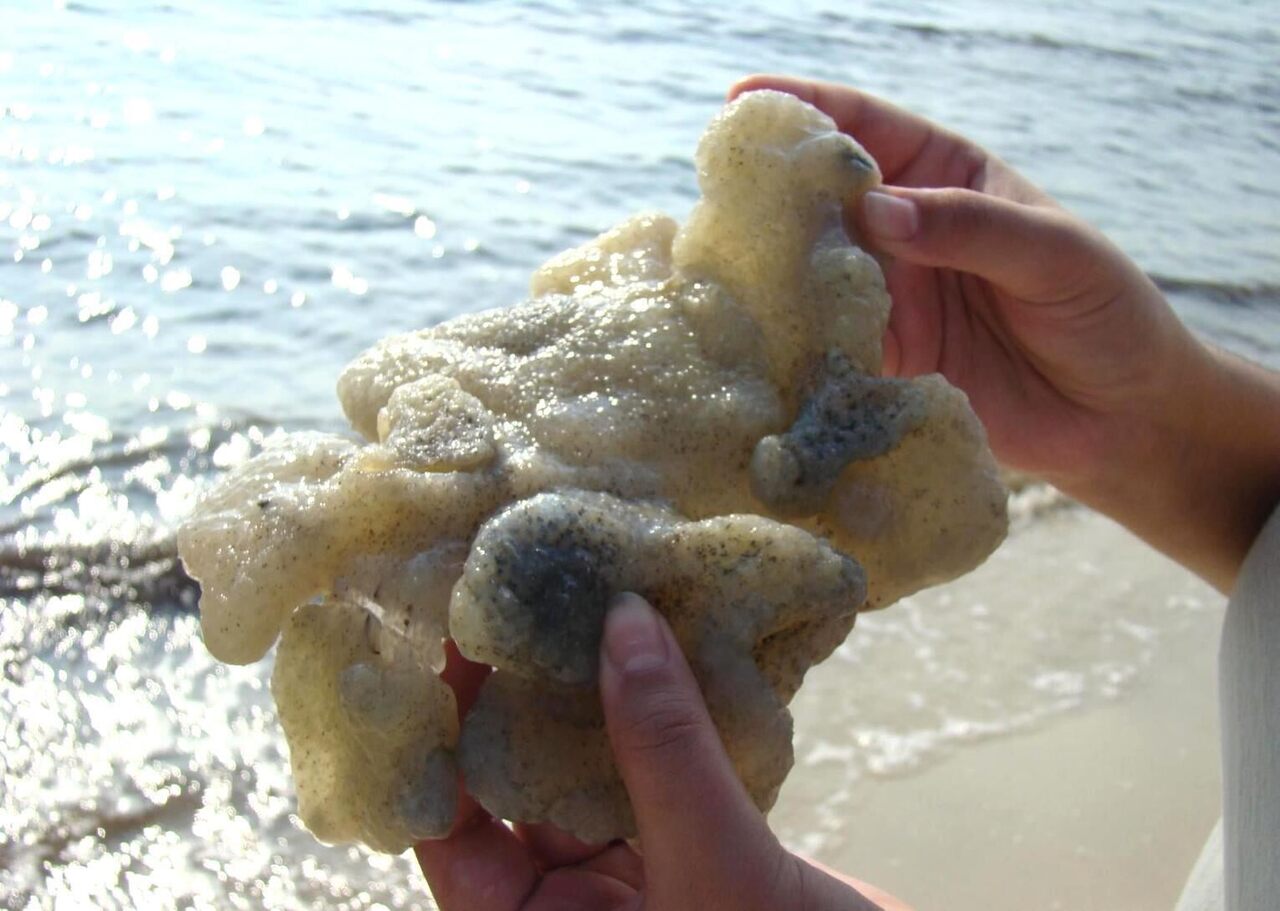 In a city crazy for seashells this museum educates and amazes visitors using the wonder of cast-off exoskeletons.
Destination Guide

Karen Parker kept finding weird stuff. It was Thanksgiving weekend, 2014, and Parker—who lives and works inland, in Florida’s Lake City—was visiting Bald Point State Park, where Ochlockonee and Apalachee Bays mingle. The conservation area on the Gulf Coast, south of Tallahassee, is known for its marshes and pale beaches, where grass tufts up from below and bald eagles glide overhead.

On the shore, Parker was seeing things she couldn’t quite figure out. There were hundreds of little, purple, pimpled objects that looked like earlobes, or maybe tiny kidneys. And then there were … what, exactly? Something that looked like a blood clot half-smothered by sand. Something else resembling a squashed breast implant. A scrap of rubber, maybe, that had sprouted lime-green fur.

As a regional public information coordinator for the Florida Fish and Wildlife Conservation Commission (FWC), Parker is no stranger to people’s questions about things that wash ashore. But these had her stumped. She picked up a stick and started to poke them, and then began snapping photos to send to her colleagues. “I was on the beach texting folks, going, ‘What the heck is this?’” Parker says.

She didn’t hear back right away, but ended up answering the question herself at the nearby Gulf Specimen Marine Lab Aquarium. Photos above the touch tank identified the purple lobes as sea pansies (related to corals), and the other strange things as “sea pork.” The term can refer to several species of tunicates, including Aplidium californicum, Aplidium solidum, and Aplidium stellatum—invertebrates that have been siphoning, filtering, and squirting water for hundreds of millions of years. Many of these creatures are composed of colonies of organisms called zooids, nestled together in a gloopy “tunic.” This sheath is made partly of cellulose, and functions as a sort of gelatinous exoskeleton, like strong, squishy armor. Sea pork can be bologna-pink, purple as bloody liver, or the creamy beige of roast turkey. The name is said to come from the fact that dead tunicates sometimes resemble slabs of glistening fat.

Mystery solved, Parker zipped back to the beach to take more photos—“as many as we possibly could”—to post on the FWC Facebook page. When they went live, some commenters weighed in to say that they had already heard of sea pork, but others had been similarly puzzled by blobs on the beach. Some wrote, “Oh, that’s what that weird thing was,” Parker recalls.

Sea pork has been confusing beachgoers for generations, and scientists and others have spent well over a century trying to correct misconceptions about it. It’s not surprising that the creatures spark dark imaginings: In death, they look like bloated cutlets or waterlogged livers, so it’s easy to wonder whether unfortunate body parts are bobbing in the waves. Onlookers have also mistaken them for tar balls from an offshore oil spill.

In June and July 1892, several U.S. newspapers syndicated a column by noted author Mary E. Bamford that tried a novel tactic—allowing a misunderstood specimen to speak on its own behalf. “I am one of those creatures myself,” the surprisingly articulate narrator declared. “Our name is ‘Tunicates’ because we are covered by a kind of leathery tunic or coat. Some people call us ‘Ascidians,’ which is a very good name to describe us by, for it comes from an old Greek word that means a ‘skin bottle.’” (Keeping with the organ theme, the etymology points to the same root as the Greek word for “bladder.”) The approach was clever, but it didn’t do much for sea pork’s reputation. In the 21st century, the creatures are still dodging insults: The Tampa Bay Times, for instance, once referred to sea pork as “maybe the grossest” thing you could find on the beach.

Beached sea pork is a common sight in west Florida, explains José H. Leal, the science director of the Bailey-Matthews National Shell Museum, in Sanibel. Though various species of sea pork are found in Tanzania and Australia, as well and along the West Coast of the United States and Canada, the western edge of Florida has a few attributes that make it especially likely to host the glistening globs. “You can go for almost the same width as the state offshore in really shallow water until you get to the shelf break where the shelf ends, and get dropped into the very deep sea,” Leal says. “Currents and waves will push a lot of things onto the beach.” That includes sea pork, which often lives on shallow rock or other hard surfaces.

Confused and curious beachcombers sometimes collect the sea pork and bring it to the museum for identification. “Some of them bring it in a plastic ziplock bag and say, ‘I didn’t want to touch it,’” Leal says. It seems most likely to show up in the winter or early spring, Leal adds, when strong winds blow ashore, but hurricanes and tropical storms fling them up, too, all the way to the Carolinas.

Before you wonder if you’ve stumbled into nature’s free, shoreline butcher shop, remember: It won’t taste like a pork chop. It won’t even have much of a smell, Leal says, just briny, like the sea. Some of sea pork’s tunicate cousins are served as delicacies in South Korea, where they’re called meongge, but these are farmed, stripped of their outerwear, and served fresh, raw, and rubbery, the Korea Herald reports. If you see some festering on the shore, though, it’s probably best not to take a bite.

Deep in the Ocean’s Trenches, The Legacy of Nuclear Testing Lives

The discovery of "bomb carbon" miles below the surface shows how deep human impact goes.
beachseabeachesoceansmysteryanimals

Help us keep them coming by directly supporting Atlas Obscura.
Become a Member
$5/month $10/month $20/month
See All Membership Options
Already a part of our membership program? Sign in.
No Thanks
Keep Exploring
animals

What Is This Mysterious Object That Washed Up on a New Zealand Beach?

Could be a nudibranch.
Video • PinDrop

From war to exploration to pleasure cruising, pets have often accompanied us on the oceans.
Read more