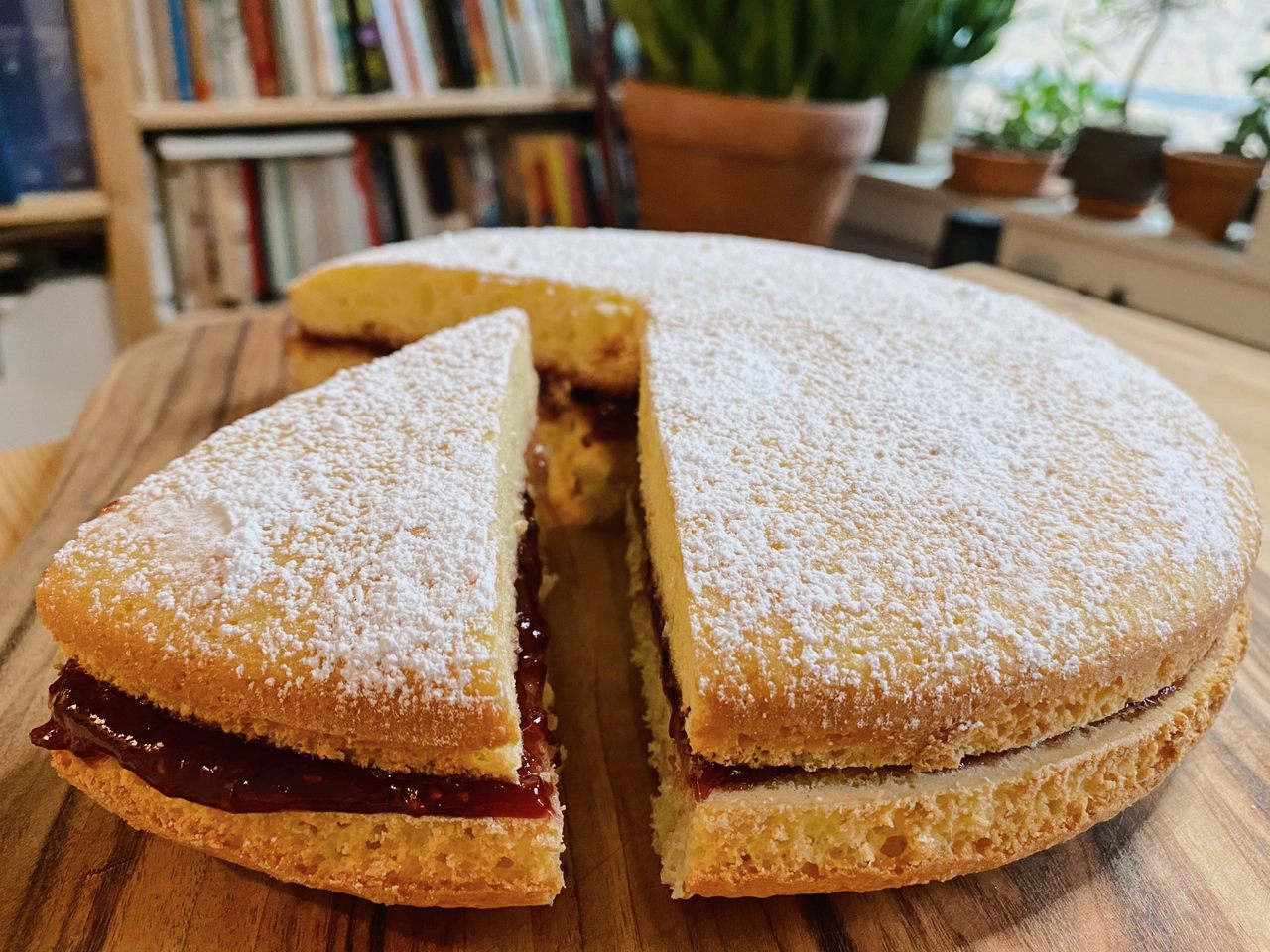 The simple treat was so popular, it had eponymous baking pans. All Photos By Carina Finn for Gastro Obscura, unless otherwise noted.
In This Story
Destination Guide

In 1895, Washington Pie was such a popular recipe that it was also a metaphor. Leading up to Independence Day festivities in Grand Rapids, Michigan, an article in The Michigan Tradesman used the dessert to explain a way to keep the town’s raucous paraders in line, suggesting that they make, “a sort of Washington Pie with that part of the procession—a layer, say, of traveling men and then a filling of Salvation Army jam, and so on, with the brass band by way of frosting.”

This article describes the most famous version of Washington Pie, which is actually a layer cake with a jam or jelly filling. According to culinary historian Patricia Reber, Washington Pie has been around since at least 1850, when a jelly-filled version made an appearance in Mrs. Putnam’s Receipt Book.

Why call it a pie when it’s actually a cake? Blame the equipment: In the mid-19th century, home cooks often baked layer cakes in pie tins. As a result, many referred to cakes baked in pie tins as “pies.” At one point, Washington Pie was so popular that shallow, round baking pans were often referred to as “Washington Pie plates.”

The pie that’s a cake owes its moniker to American president George Washington. In the 1800s, it was a fairly common practice to name special-occasion desserts after presidents: there was Washington Pie, of course, but there were also (Grover) Cleveland Cakes, (Zachary) Taylor Cakes, (Andrew) Jackson Jumbles, and so on. The naming convention may have been a way for the female homemakers of the era to establish a sense of participation in national politics before American women earned the right to vote in 1920. Women could choose to bake a dessert named for a preferred political candidate during an election, or show their patriotism on Washington’s birthday, made a federal holiday in 1879, or Independence Day by honoring one of the Founding Fathers in cake form.

There’s also a second, very different, version of Washington Pie, which was made primarily in bakeries in the Washington, D.C., area. This style—whose name likely stems from its place of origin—does involve pie crust, though it doesn’t eschew cake entirely. It was essentially a bread pudding made from leftover cakes, baked inside a double crust pie shell in a square tin. It was cheap, filling food, and provided a way for professional bakers to use up otherwise unsellable odds and ends. It’s hard to pinpoint the origin of that iteration, but it at least pre-dates the Civil War, according to newspaper records.

While the bread-pudding version of Washington Pie seems to have faded away around the turn of the century, its layer-cake counterpart evolved. Variations included fillings ranging from applesauce to plain custard to cream with lemon extract. But by World War II, these recipes also disappeared. By 1955, when a reader wrote to The Washington Post in search of a recipe for the dessert, no one could satisfy the request.

So why did this dessert, which was once so common that, as Washington Post columnist John Kelly wrote in 2017, “just about everyone in Washington—nay, in the country—knew how to make [it],” disappear? There’s no one, obvious answer. It’s possible that, American tastes simply shifted toward richer, more decadent choices, like brownies, Boston Cream Pie, and layer cakes made in the Betty Crocker style.

Patricia Reber notes that there may even be “Washington Pies” floating about but with new names.“Certainly a cake named pie was old-style,” she says. “Layer cakes with jelly are still made in the South, with other names like Jam Cake or Smith Island Cake.” Similar desserts are still popular in other countries, like the United Kingdom’s Victoria Sponge or Australia’s Lamingtons, though neither is directly related to Washington Pie.

Delicious desserts fade into obscurity for no satisfying reason throughout history—just look at the luxurious Marlborough Pie. Nonetheless, Washington Pie is easy enough to recreate in the modern kitchen, and it’s worth it. It’s the kind of cake that’s perfect to throw together in the evening so that the jam can soak into the layers overnight. It makes a fine breakfast, and a perfect mid-afternoon snack. And if you have leftovers, it’s easy to transform half of a cake into the other version of Washington Pie, which might be the more delicious iteration. The custard interior has a kick of tartness from the cake’s jam filling, and the added lemon zest pairs perfectly with the crisp, crumbly pie crust.

For the layers:
4 eggs
1 ⅓ cups white sugar
1 teaspoon baking powder
1 cup flour
Juice and zest from half a lemon

For the filling:
6 ounces of tart raspberry jam

For the topping:
Confectioner’s sugar, for dusting

1. Preheat the oven to 350° F. Prepare two round, shallow 8-inch pans (you can use pie tins if your cake pans have high sides) by coating them with butter and flour, then set aside.

2. Separate the eggs. In a medium mixing bowl, whisk together the yolks with sugar, lemon juice, and lemon zest.

3. Sift together the flour and baking powder, then sift into the egg yolk mixture and beat until just combined.

5. Divide the mixture evenly into the prepared pans and bake for 25 minutes. The cakes will have risen slightly and will be lightly golden when finished.

6. Cool the layers completely, then spread the bottom layer with a thick, even layer of raspberry jam. Top with the second layer, and dust with confectioner’s sugar. This cake is best served after it has sat overnight, and is excellent with whipped cream.

For the crust:
4 prepared pie crusts (You’ll need this much dough to fully line a standard loaf pan.)

1. Preheat the oven to 375° F. Line a standard 8 ½-inch by 4 ½-inch loaf pan with pie crust and chill in the refrigerator while you prepare the filling.

2. In a large mixing bowl, combine the cake cubes, raisins, and chopped nuts.

3. In a smaller bowl, whisk together milk, eggs, orange zest, cinnamon, ginger, and sugar. Pour over the cake cube mixture and soak for 10 minutes.

4. Fill the pie crust with the soaked cake cubes and remaining custard, then top with an additional layer of pie crust and crimp the edges. Make four to six diagonal slashes in the top crust.

5. Bake for 45 to 50 minutes, until the crust is golden brown and the filling is set but still has a bit of a wobble. Cool in the loaf pan, then turn out and cut into slices.

The Historic Russian Recipe That Turns Apples Into Marshmallows

The literal underbelly of public agencies.
Video • Wonder From Home

The world's oldest soul food restaurant is also one of its best.
Washington, D.C.

The Presidential Booths at Martin's Tavern

Sit where JFK proposed to Jackie or where Nixon dined on meatloaf at this storied pub.
Washington, D.C.

This restaurant has been a haven for D.C.'s LGBTQ community since the 1950s.
Washington, D.C.

This unique museum cafeteria showcases the history and regional diversity of African American cuisine.
Want to see fewer ads? Become a Member.
From Around the Web
THE GASTRO OBSCURA BOOK
Taste the World!
An eye-opening journey through the history, culture, and places of the culinary world. Order Now