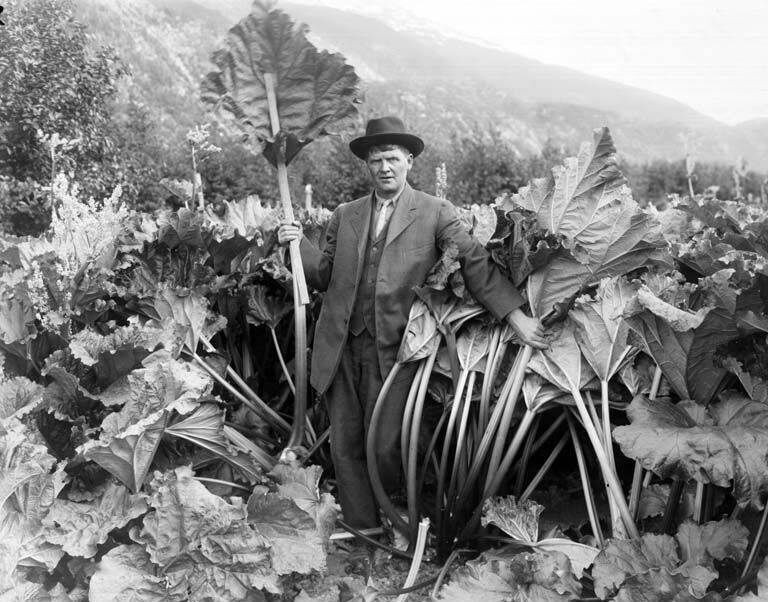 A stretch of land where the sour-sweet vegetable is cloaked in darkness and grows so fast you can hear it crack, squeak, and pop.
Destination Guide

In 1914, the Seattle Star published a picture of a little girl triumphantly holding a huge, leafy stalk above her head like a spear. “Alaska is not all snow and ice,” the headline blared. “Rhubarb pies!”

The little girl, Dorothy, was something of a rhubarb princess, being one of the daughters of Henry D. Clark, who was known around Skagway, Alaska, as “the Rhubarb King.” Clark didn’t rule alone though. Across the United States, from Ohio to California, Washington to Illinois, various “rhubarb kings” were lauded for their ability to grow great quantities of the fruit-vegetable. (While a leafy green, rhubarb’s sour stalks are typically treated like a fruit and cooked with lots of sugar. The leaves are toxic.)

But Clark’s rule was different. For one thing, he farmed in Skagway, where summer days stretch to 19 hours. Rhubarb turned out to be a serendipitous choice. To the awed delight of early Alaskan farmers, not only does rhubarb like the cold, but it grows to monstrous size under the midnight sun.

According to Dr. Danny L. Barney, former curator of the Arctic and Subarctic Plant Gene Bank in Palmer, Alaska, cultivated rhubarb has a history of hardiness. Likely originating in chilly Tibet and China, it stepped off the steppes to become a valued medicine, with ancient doctors lauding its roots as effective against everything from cancer to the plague. Rhubarb eventually made its way to Russia, and from there to Western Europe, where it found a foothold in chilly England.

For centuries, rhubarb stayed more treatment than treat. As Barney writes in an email, “It was only after processed sugar became widely available [around the mid-1700s] that the acidic and sour stems became popular for culinary use.” Soon after, Barney believes, cultivated rhubarb arrived in Alaska when Russian trader Gregorii Shelikhov brought it with him to Kodiak Island in 1784.

By the 19th-century, cheap sugar had enabled rhubarb to become known as “the pie plant.” By mixing lots of sugar with its chopped stems, housewives could make a sweet, tangy filling without any citrus or apples. Rhubarb became a kind of fruit substitute, especially in Alaska. After all, many culinary rhubarb varieties are hardy, require minimal care, and thrive in cool climates.

“We think that maybe he had rhubarb seeds in his pocket,” Hill says. On his return to the town of Skagway, Clark established his rhubarb farm⁠—a wise decision, considering the local lack of fresh food. A photo from 1913 shows Clark holding a humongous rhubarb stalk, topped with a large fluffy leaf, along with a yardstick in one hand to demonstrate its size. “That’s three feet just there,” Hill points out. “I don’t think he was an abnormally short or tall man. So it’s a very large piece of rhubarb.”

Along with other varieties, Jewell Gardens still grows Henry Clark’s strain of rhubarb, which has a white, pink-tinged stem instead of the usual bright red. Henry Clark’s rhubarb also grows throughout the town—a consequence of the farm’s tragic end. During World War II, the military commandeered Clark’s land to store fuel, says Hill. Townspeople gathered up his rhubarb before it could be destroyed. While Clark died in 1945, descendants of his plants grow on.

Many Alaskans still feel passionately about rhubarb, even though other fruits are easier to buy locally these days. Ruby Hollembaek, who owns a bison and elk ranch near Delta Junction, Alaska, founded the “Alaska Rhubarb” Facebook group almost 10 years ago. She sees a bright future for rhubarb. “It is such an easy crop to raise, and it’s good for you,” she says, noting that rhubarb could be a boon for remote communities, where locals depend on imported, often unhealthy foods.

“Traditionalists still like rhubarb,” agrees Barney. He has a soft spot for the Crimson Cherry variety. But he acknowledges that the sour stalks, which require a high dose of sugar, are going up against the one-two punch of easily available fruits and a modern fear of high-sugar products. It doesn’t help, he says, that with a few exceptions, large-scale farming hasn’t proven that successful in Alaska yet.

Barney has since retired to Wasilla, Alaska, and has taken on the task of breeding rhubarb suitable for commercial growers. “Historically, most rhubarb varieties came about as chance seedlings that growers found appealing, named, and cloned,” Barney notes, but he carefully chooses plant parents, looking for crosses that produce good features such as size, sweetness, and suitability for juicing. The future of rhubarb, he muses, may lie in the tourism industry. Rhubarb, he hopes, could become Alaska’s calling card: the star of “specialty culinary dishes unique to the region.”

In the meantime, rhubarb still has pride of place at Jewell Gardens. At their 2019 Summer Solstice and Rhubarb Festival, a thousand attendees stayed out in the Skagway sun late into the night. The Gardens handed out prizes for the largest locally grown rhubarb leaf and stalk (35 and 40.75 inches, respectively) and sold various rhubarb treats. “We did sell 120 rhubarb pies that night,” Hill lists off. “65 pounds of rhubarb barbecue. Five gallons of rhubarb lemonade.”

“It’s kind of a fabled thing,” she muses, along Barney’s lines. “People come here and they want to eat rhubarb pie.”

In Palestine, Protecting One of the World's Oldest Olive Trees Is a 24/7 Job

Originally a brothel during the Klondike Gold Rush, this bar once used dolls to denote when ladies were working.
Córdoba, Spain

This California family's ancestral melon is sold only here.
Want to see fewer ads? Become a Member.
From Around the Web
THE GASTRO OBSCURA BOOK
Taste the World!
An eye-opening journey through the history, culture, and places of the culinary world. Order Now