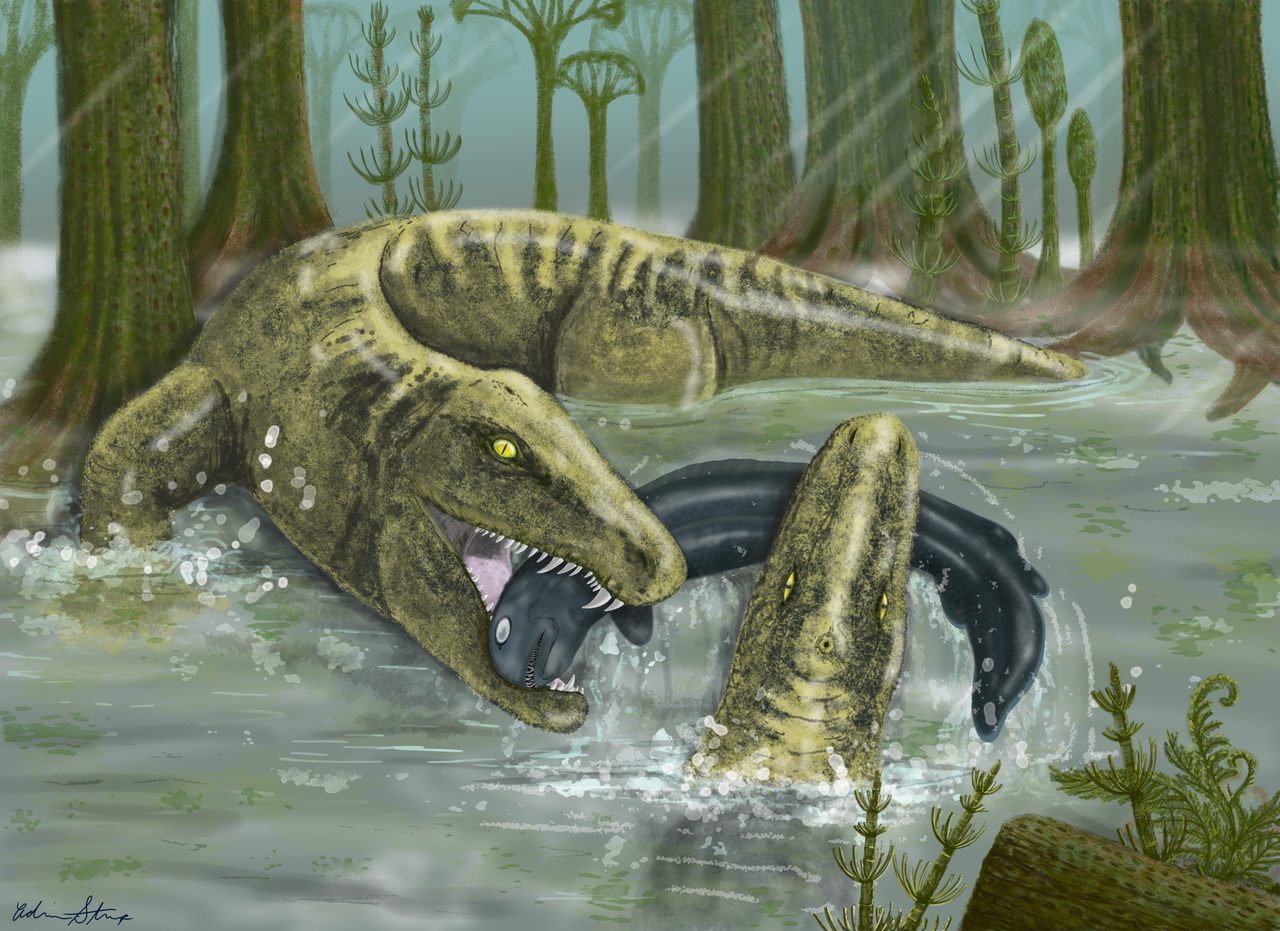 At six feet or longer, 340-million-year-old Whatcheeria deltae was the apex predator of its ancient Iowa ecosystem. © Adrienne Stroup, Field Museum
In This Story
Place

No one knows the origin of this small town’s unique name.
Destination Guide

So, you’re a lungfish. You’re minding your own business, searching for snails and other tasty morsels in the warm, murky water of a tropical lowland lake that will, in some 340 million years, be in eastern Iowa. Your long but plump body—an aquatic sausage with teensy fins—swims through the shallows, past what looks like a large rock.

It is not a rock. It’s a six-foot-long giant in this ancient ecosystem: a muscular menace that might be mistaken for an overbuilt crocodile with the head of a T. rex. With its powerful limbs firmly on the lakebed, the monster strikes, opening and then snapping shut its long, narrow jaws lined with knife-like teeth. This apex predator is built to hunt animals bigger than you, including sharks, but you’ll do for a snack. Take heart, unfortunate lungfish: Soon enough, at least in geological time, this creature and all the other Whatcheeria deltae will be extinct. Their fossilized bones will one day fill drawers of a cabinet tucked away, out of public view, at Chicago’s Field Museum of Natural History.

It was there, hidden among those hundreds of W. deltae fossils, ranging from single femurs to nearly complete skeletons, that scientists recently uncovered a plot twist: This predator of ancient Iowa got real big real fast in its youth. This pattern of rapid juvenile growth is an adaptation thought to have evolved hundreds of millions of years later. Finding it in this long-extinct animal challenges established assumptions about how we, and all other four-limbed animals, came to be.

“It’s a paradigm shift,” says Loyola University Chicago paleohistologist Megan Whitney, the lead author of a paper published this week in Communications Biology that describes the animal’s surprising growth pattern. Whitney sliced into several Whatcheeria fossils to study the preserved structures microscopically, which revealed how quickly the bones grew and changed shape. What she found were dramatic changes similar to those a human skeleton undergoes in its early years.

Whitney adds that her team’s findings revise more than just our understanding of Whatcheeria: “It tells us something about our story.”

Whatcheeria is not our direct ancestor, but a distant relative in our sprawling family tree. The Iowa predator was an early tetrapod, or four-limbed animal, and lived at a time when this group was transitioning from water to land. The tetrapod family tree would eventually evolve into every vertebrate that lives or has lived on land, and a few, including whales and seals, that returned to the water. Scientists have long thought that rapid growth spurts occurred only in the most advanced tetrapod lineages, animals that had evolved the most specialized traits: birds, their dinosaur ancestors, and mammals.

“We think of elevated growth rates as being super-duper specialized, mostly just in birds and mammals,” says Whitney, who set out to study Whatcheeria while at Harvard University, as part of a larger project on early tetrapod development. She anticipated that the Iowa predator would have a slower, more consistent growth pattern over an individual’s life, similar to modern crocodiles, which have not evolved or specialized as much as other tetrapod species. “It’s kind of unspoken that slow and steady has to be the ancestral condition of all tetrapods. So that’s what I expected.”

As coauthor Ben Otoo recalls, things didn’t go as planned during the project. “When we cracked the bones open and saw Whatcheeria was growing lickety-split, we thought, ‘This is very strange,’” says Otoo, a paleontologist affiliated with the Field Museum and the University of Chicago.

Finding fast growth in Whatcheeria, Whitney says, shows this trait was already present in the earliest chapter of tetrapod evolution. It suggests that rapid growth may be an ancestral, or default, feature, which would be “a total shift in the way we think about how growth rates evolved in tetrapods.” Or, she admits, there’s another possibility: “Whatcheeria is just a weirdo, and it did its own thing.”

Named for the Iowa towns of What Cheer and Delta, near the quarry where its fossils were first collected in the 1980s, W. deltae “has some obviously weird features,” says coauthor and Field Museum paleontologist Ken Angielczyk.

It had powerfully built limbs rather than fins, but it spent its life in water, with perhaps only rare forays onto land, where it would have been slow and awkward. Despite that, says Angielczyk, “It’s a really impressive animal, with big, ferocious teeth.” With a nod to the Field’s most famous resident, he adds: “It was the Sue the T. rex of its day. You wouldn’t want to run into Whatcheeria.”

There is no modern animal quite comparable to the long-lost predator, he adds, but its hunting behavior might have been similar to that of an alligator snapping turtle. “They are very big, robust animals with big, heavy limbs, but they spend most of their time in water. They sit at the bottom. They’re ambush predators, and when they move around, they actually walk along the bottom. And probably Whatcheeria was something like that.”

University of Bristol paleontologist James Rawson, who was not involved in the new paper but has studied Whatcheeria, also had a go at finding a modern analog to the ancient scourge of Iowa: “It may have looked superficially like a giant salamander, had a predatory ecology like a crocodilian, and a swimming style comparable to a duck-billed platypus.”

Then again, “at two meters [long], at this point in time, especially in this locality, it’s kind of ‘Do whatever you want,’” says Otoo with a chuckle.

Whatcheeria was the largest predator of its ecosystem and, while it’s unclear why the juveniles grew so quickly, the fact that at least some adult Whatcheeria were more than six feet in length suggests one reason it might have been advantageous, says Angielczyk. “It helps to grow quickly and not be someone else’s lunch.”

Whatcheeria was also the most common fossil collected from the old quarry, which made analyzing its growth patterns possible in the first place. Having so many specimens from multiple juveniles and adults allowed the team to sample bone from a wide range of life phases.

While Whatcheeria is an intriguing and significant species, don’t feel behind the curve if you’ve never heard of it. “No one has,” says Whitney, laughing. “Even as a paleontologist, I didn’t know anything about Whatcheeria until I started this project. It should be more well known, but these fossils are not as charismatic as a T. rex.”

Thanks to the unexpected discovery of Whatcheeria’s growth spurts, however, the extinct predator may finally get some respect. Other paleontologists already see the findings as significant. “I think the evidence presented here makes a good case for rapid juvenile growth in Whatcheeria,” says University of Bristol’s Rawson. “It suggests there may be a lot more to learn about the life history of other early tetrapods.”

Per Ahlberg, a University of Uppsala paleontologist who has studied early tetrapods for more than 30 years, says the new paper’s conclusions are sound—but not necessarily that surprising. He notes that there are signs of similar rapid growth in Eusthenopteron, a fish that lived more than 40 million years before Whatcheeria but appears to be closely related to early tetrapods. “In some respects Whatcheeria looks like a speeded-up version of Eusthenopteron,” he says.

It may turn out that Whatcheeria defies our expectations of an early four-legged animal not because it’s weird, but because our assumptions are wrong. “Not many studies have been made on the bone histology of the earliest tetrapods,” says Ahlberg. “But this will come over the next few years.” His lab is one of several groups refining noninvasive ways of imaging the microstructure of bone, which would give scientists a look into even the rarest fossils, no slicing required.

For now, all the Whatcheeria ever found are sitting in drawers at the Field, as oblivious to their value as an ancient lungfish swimming past a hulking shadow, while scientists continue to piece together more of the early tetrapod puzzle.

“This is our origin story. This is how we come to be,” says Whitney. “You don’t have anything with bones walking on land that doesn’t come from this story. [And] it’s more complicated than we thought.”