The Crab Migration That the Colombian Army Is Dispatched to Protect - Gastro Obscura
Want to see fewer ads? Become a Member. 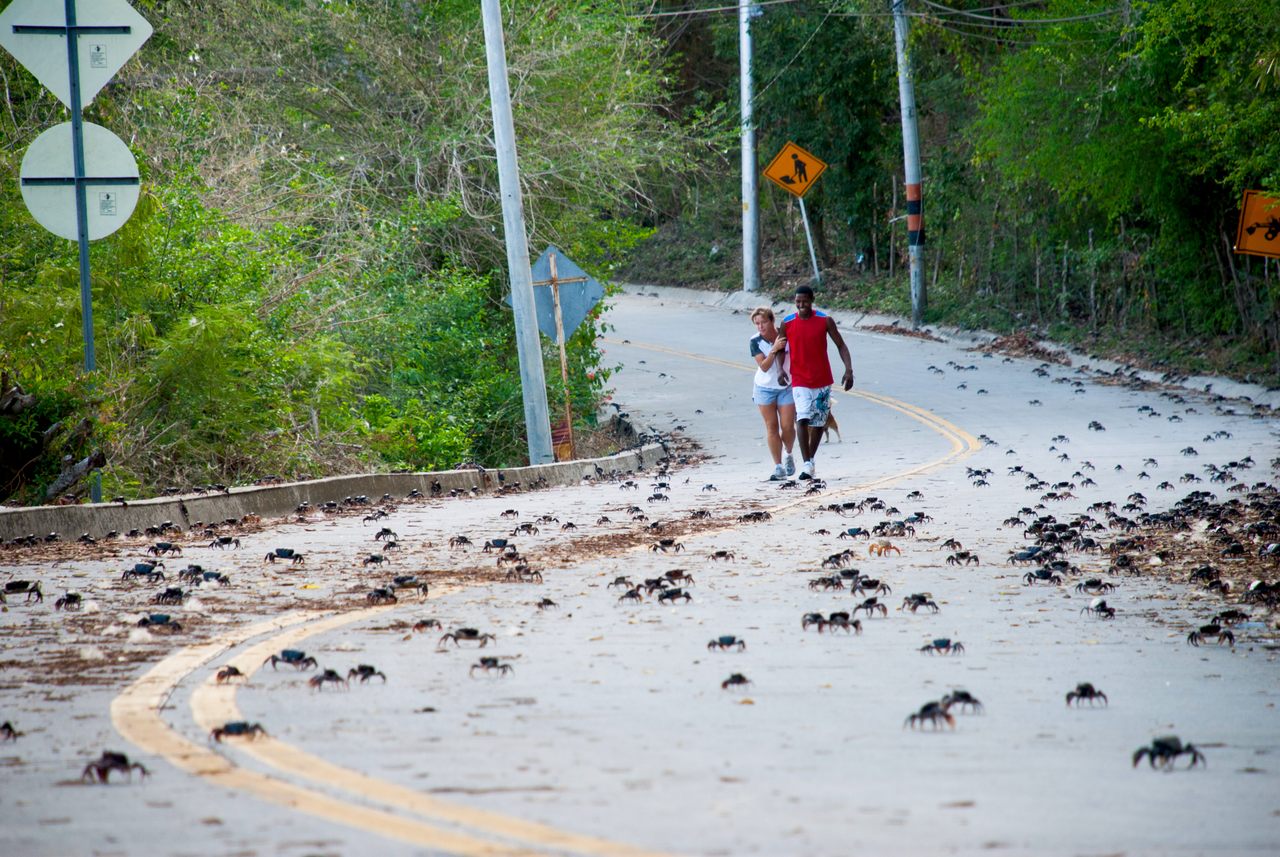 The crabs make their way across a road, while locals evade them. Gabriela Dominguez - Lighthouse Providencia
In This Story
Destination Guide

The minuscule Caribbean island of Providencia, which is part of Colombia, is almost untouched by development, rarely visited by tourists, and inhabited by around 6,000 people. But once a year, the Colombian military descends upon the luminous island, with its crystalline water and swaying palm trees. The military’s task is to protect an army of black crabs—a species endemic to the island—during their brief migration period.

This particular species, known as Gercarcinus ruricola, typically lives on land. But they head to the sea annually for breeding purposes. The crabs, which have a black shell with red legs and yellow markings, lay their eggs near the sea, incubate them for around two weeks, and then enter the ocean for the larvae to hatch. Once they’ve hatched, the larvae develop in the sea for almost three weeks, and those that survive make their way back to shore to live inland in the dry forests, beneath logs and rocks, or underground.

The crabs’ migration has recently become a well-known phenomenon within Colombia, although they have been around since before islanders even settled in Providencia. But the crabs represent more than just a photo opportunity. For hundreds of years, black land crab has been a traditional delicacy for the islanders. “The black crab means a lot for our people,” explains Winston Arenas Jay, a 38-year-old tour guide who grew up in Providencia. “They are part of who we are, part of our identity, part of our tradition, our culture.”

He says that every child growing up on the island remembers a first encounter with the crabs. “If your parents want you to do something and you don’t, they’ll say ‘the crabs will get you,’ and then you’ll obey [them] immediately,” he says. “But pretty soon you understand they’re not aggressive and you start to admire them.” Jay recalls learning how to catch the crabs as a child with his hands without getting hurt, and having to remove them from his home by the bucketful. “There are just millions and millions of newborn crabs everywhere,” he adds. “They can be as small as a mosquito.”

People trap the crustaceans at night, and by hand, when they come out in search of food (usually fruits, mushrooms and other organic matter from the forests). Hunters go into the forests with lanterns, catch the crabs alive, then keep them in boxes with high sides to stop them making a getaway.

The crabs are killed the next day, mostly by women working with small knives and handmade tools in their homes. The crustaceans are boiled, and both their shells and meat are removed. They’re then sold or kept for future meals. “We call this ‘picking’—when you separate the useful part of the crab from the unuseful part, which is a very difficult job,” Jay says. “It’s a very popular food on the island, we love to eat black crab.” Traditionally, the crabs are boiled or stewed. They’re served either with rice in a local dish called rondón, in empanadas, or in a popular soup that’s cooked with herbs, coconut milk, garlic, yams and dumplings.

Hunting crabs used to be a largely sustainable practice, due to the small numbers of residents living in Providencia. However, in recent years, tourism has increased exponentially. In 2008, the number of tourists, both domestic and international, to the Archipelago of San Andrés, Providencia and Santa Catalina—a third, unpopulated island—rose to 340,333 people. In 2017, the number of visitors numbered 960,846.

These days, the majority of crabs caught in Providencia are destined for neighboring San Andrés. “It is a very overpopulated place,” Jay notes. “The places selling black crab in San Andrés offer higher and higher prices, making it very attractive for crab hunters here to send their produce over there, and try to catch more and more.” To satisfy the increased demand for the crab meat, locals have intensified crab fishing. This, coupled with an increase in road traffic—which often unfortunately results in crabs being run over—and an increase in dry forests being replaced with agricultural land, has led to a decline in the crab population.

Although there are no statistics on the number of crabs on the island, many local fishermen say they now struggle to catch the same number of crabs they used to. “Crab fishing is part of our life,” says 52-year-old Juan Restrepo, who is currently out of work now that the seasonal ban—implemented to manage the crabs’ decline—is in place. (Catching, consuming, and selling black crabs is banned from 1 April to 31 July). “But more people have moved here to experience our way of life, and more people are fishing, and so there are not as many crabs as before.”

In recent years, the decline in the crab’s population has become a great threat. Over the past 10 years, the Colombian government has shipped the army to Providencia to guard the crabs, during the time of year when they migrate in tens of thousands.

Military checkpoints are set up across the island and officers from the “crab watch division” are dispatched, equipped with automatic rifles, to guard sections of the road that have been closed to traffic. The only way to get through is by foot, meaning locals often have to travel around the full stretch of the island if they wish to get to the other side of the closed road. “I feel I am doing an important job,” says David Castillo, a 22-year-old from Bogotá who has been posted to Providencia by the army. “Some people think it is strange, that the army comes here. But it is a nice job to do.” He says that some people don’t understand why they’re there, and some fishermen are salty about the fact that they can neither kill nor sell crabs for a long stretch of time.

During the four month ban period, locals adopt a practice they’ve dubbed “crab swerving.” It’s a necessary skill in ensuring the precious crabs don’t end up as roadkill. Since most of the transport on the island is by moped, the skill involves a last-minute swerve left or right to avoid a crustacean scuttling across the road.

The thousands of pregnant crabs sidestepping their way to the ocean is a spectacle to behold. The exact date of their migration varies by year, although it’s always between April and July. But even once the mothers have made their way down to the sea, the army’s job is far from over. At that point, they’re tasked with protecting the baby crabs returning from the sea and scurrying their way inland, where they will then develop into adults.

These protective measures are reinforced by a local stature known as the The Coralina Resolution, which recognizes the threats to crab populations from habitat destruction due to construction activities, roadkill during the migration period, and overexploitation. It also notes the ecological importance of the black land crab, including its role in nutrient cycling in the soil, and its importance as food and source of income.

“It is good to have more tourists to San Andrés [a neighboring island where much of the crab meat is sold], because then we have more people to sell to, but it is worrying,” adds Restrepo.“I do not know what it will be like in 20 years’ time—whether there will be any crab left to fish. I do not think my son will be able to be a crab fisher like me.”

Maria Alexandra, a spokeswoman for the Environment Ministry, stresses that the black crab’s existence is in peril. “It is very important it survives because there are businesses on the island that earn money solely from the crab,” she says. “Not only that, but it’s an identity symbol of the native community.” Alexandra adds the government has no specific program in place to protect the crabs other than dispatching the army. But it’s provided support to the mayor and local government nonetheless. “The most important thing is that the Providencia Community educates and raises awareness about the crabs and safeguarding the species,” she adds.

Some Providencia locals, such as Jay, feels even the help of the army is not enough. “We must protect the crabs and not use our cars at all during migration season—some years no newborn crabs survive at all,” he says. “Everyone on the island has a motorcycle or a scooter, and if these are used instead of cars, a lot of crabs would be saved—many are still killed on the roads.” He also wants to see the local government create a law to prohibit crabs being removed from the island and sold to San Andrés. “This would preserve the future of this species and guarantee that our children and grandchildren can enjoy this important part of our culture, tradition and gastronomy,” he says.

How Comparisons Help Us Understand the Universe

An eccentric heiress, a daring mission, and the fight for North America’s most unusual pig.
islands

Scientists hatch a bold plan to save Brazil's critically endangered golden lancehead, which lives on a single infamous isle.
islands

In the Florida Keys, the local catch is "renewable."
Video • Object of Intrigue

In the middle of one of South America's most historic walled cities lies a bar with an enormous collection of Soviet memorabilia.
Bogotá, Colombia

This tiny shop has been serving traditional tamales for more than 200 years.
Condom, France