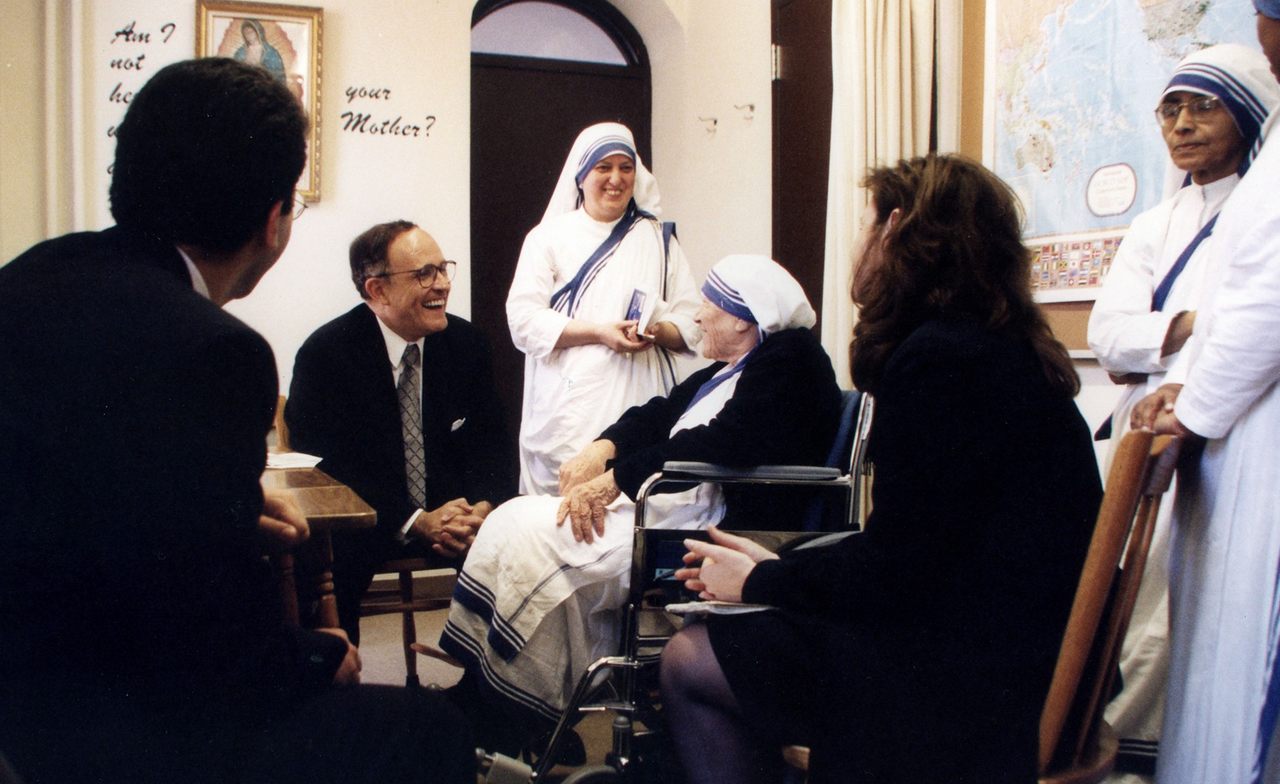 In the picture above, Rudy Giuliani, Hizzoner, Mayor of New York City, is having a grand old time with Mother Teresa. This meeting took place in June of 1997, just a few months before her death, when she came to New York for a surprise visit to the South Bronx branch of her organization, Missionaries of Charity. What did the world’s most famous nun need to talk to the Mayor of New York about?

As the New York Times reported, the main item on Mother Teresa’s agenda was making sure that her nuns had special parking permits that would allow them to park in normally illegal spots. According to the mayor, she got them: ”I would do anything Mother Teresa wanted,” he told the Times. “If Mother Teresa wants more parking, she can have more parking.”

Among all the opaque and hidden systems of New York City, the unwritten rules of public parking are one of the most mystifying, both to outsiders and the people that live here. Understanding how it works can feel like unlocking an obscure code.

At the core of this mystery is an astonishing fact: some of the most valuable land in the country, if not the world, is available, for free, to store parked cars. Because such a valuable resource is available for no money, the cost is measured in different currencies. To park on the street in New York City, it’s almost necessary to have access to either time or political influence.

One of the stranger rituals of New York City life is alternate side parking. Every street in the city has a designated period when parking is forbidden and the street cleaned. When ASP kicks in, the cars parked on one side of a street move, en masse, to double park on the other side. It’s a strange phenomenon: I once saw a car with Alabama plates crawling down the street during ASP, its occupants clearly baffled, the person in the backseat filming the whole thing on their phone, as if they had encountered crop circles or some other disturbing sight. This practice is also illegal. If you look at the city’s website, the most frequently asked question about ASP is “Can I double park when ASP is in effect?” The very clear answer: “No, double parking is illegal at all times.”

But during ASP periods, parking enforcers ticket unmoved cars, while ignoring the flagrant lawbreakers across the streets. Everyone knows the system. Everyone accepts it. There are variations, neighborhood by neighborhood, street by street. Some places, the drivers wait out ASP in their cars; elsewhere it’s acceptable to lock your car and come back in an hour. On some streets, you can pay a neighbor to move your car; in some wealthy areas, doormen perform this service. On one street near me, a retired cop coordinates the weekly migration—if someone doesn’t move their car fast enough, he’ll knock on their door or holler until they come out and perform their part.

The second hidden system of parking in New York is the one Mother Teresa was trying to take advantage of. The city government issues permits to certain groups of people—teachers, government employees, clergy, and employees of other not-for-profit organizations. These permits allow their holders to bend the rules: a car with a clergy permits, for example, can be left in no parking zones near hospitals for up to three hours.

“You’re a member of protected class and a rarified class if you can get a magic placard that lets you park wherever you are,” says Paul Steely White, of Transportation Alternatives, a local advocacy group that believes New York’s streets should be made more friendly to all forms of transportation, not just cars.

The group has a problem, on principle, with the permits, which White call the “crony-ish and corrupt way parking is distributed to certain groups of New Yorkers,” but also, more pressingly, with the way they’re abused. Surveys of areas popular with permit holders show that people with permits park anywhere they want—by hydrants, in crosswalks, on sidewalks, none of which is allowed under the terms of the permits. But they’re rarely, if ever, ticketed. As with the ASP double parkers, it’s almost like a car with a permit becomes invisible. Plus, it’s extremely easy to create fake permits. “You make some official looking sign and you slap some on laminate and you can park pretty much wherever you want,” says White.

Presumably, though, Mother Teresa and her nuns were not going to just create fake permits for themselves. Instead, they had to flex what muscle they had—they had to have Mother Teresa go directly to the mayor. According to the Times, this had happened from time to time over the years. At a memorial from the nun just a few months later, Giuliani said, “If she wanted parking spaces, we gave her parking spaces. If she wanted parking signs for her nuns, we gave her parking signs…She didn’t even have to ask.”

Which wasn’t quite true—like any other parking-hungry supplicant, coming to the city in search of more space, she did have to ask.

The Creative and Forgotten Fire Escape Designs of the 1800s

The notorious Nissan Tsuru has long been the city's de facto taxi. Now, change is coming for the vehicles, and for the people who drive them.
roads

The garage is a symbol of suburbia, a site of rebellion, and a very strange room.
cars