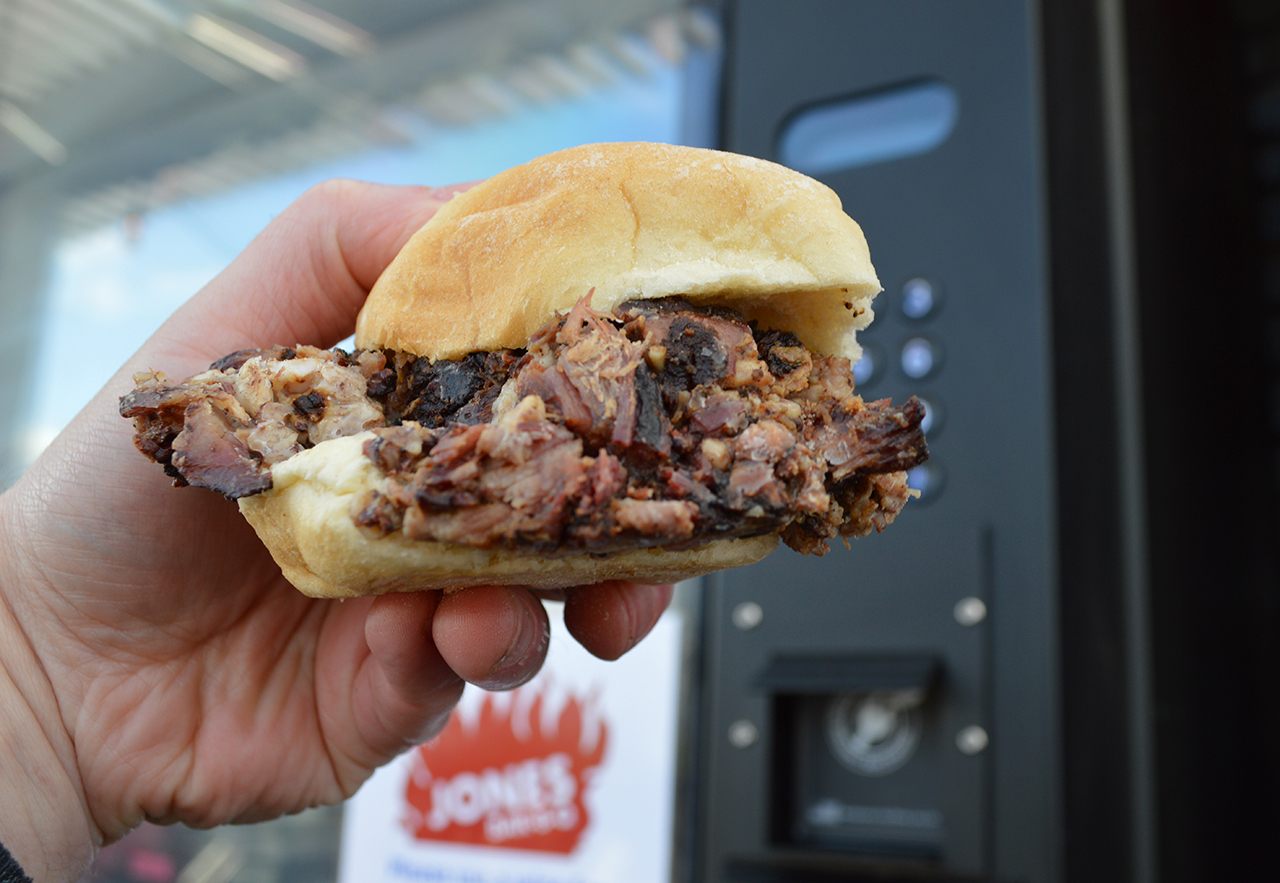 The signature dish tastes like meat candy in a bun. All photos by Jonathan Bender
In This Story
Place

Why settle for barbecue chips when you can get actual barbecue?
Destination Guide

Frank Norton stands underneath the white pergola that extends over the front of Jones Bar-B-Q, a black mask covering the lower half of his face. It’s a bit before 5 p.m. He’s facing a classic dilemma: “What’s for dinner?”

A few weeks ago, Norton would have been out of luck. The Kansas City BBQ spot, owned by Deborah “Little” Jones and her sister Mary “Shorty” Jones Mosley, has always been a lunch-only affair. Tuesday through Saturday, the counter opens at 11 a.m. Even before they were featured on the third season of “Queer Eye For The Straight Guy,” they often sold out before their stated closing time of 3 p.m.

But now, there’s smoked ham and turkey and beef behind the glass of the vending machine that’s humming beside the shuttered order window. After some debate, Norton settles on rib tips and swipes his credit card. A clamshell package lands with a soft thunk. Norton takes his dinner to go, just as another car pulls up in the parking lot.

“When we got the call that the machine was ready, I thought this couldn’t have come at a better time,” says Jones. “As a small business, we’ve got to try new things and see what happens.”

Although it’s ideal for contactless takeout and delivery amidst the COVID-19 pandemic, the vending machine has been in the works since last winter. Takeout has always been the main focus at Jones, and demand was there. “There’s a bar in the same strip as us, and people would come up wanting something to eat at two in the morning,” Jones says. “I always had to tell them no because we just started cooking.”

Jones knows that barbecue isn’t a convenience food. But, she thought, what if it could be?

“We got a pop vending machine, and I looked at it and thought maybe we could put food in,” Jones says. “The vendor couldn’t believe it when I first asked about putting barbecue in a vending machine.”

Kansas City barbecue, though, was founded on innovation. While the United States’ other major barbecue regions focus on specific cuts—Texas has brisket and ribs, the Carolinas and Memphis dish up heaping portions of pulled pork—Kansas City is where all meats come to be barbecued.

It’s a legacy built on the importance of local stockyards and influx of Black cooks migrating from the South at the turn of the 20th century, including enterprising pitmasters like Henry Perry, who transformed the scraps and cuts of meats like brisket that nobody else wanted into something delicious.

While Kansas City pitmasters cooked a variety of meats—Perry served possum alongside brisket—the city’s barbecue identity is embodied in burnt ends. The crispy, charred bits of brisket (the tapered ends cook quicker than the middle) were lionized by author Calvin Trillin as “burned edges” nearly 50 years ago.

In that 1972 Playboy article, Trillin commented that the best food in the world was being handed out for free by the countermen at Arthur Bryant’s, a restaurant on the east side of Kansas City with a direct connection back to Perry. Pitmasters soon realized that people would pay for the juicy bites that they once added, free, to the plate alongside a beef sandwich. “Burned edges” became “burnt ends,” and Kansas City got its signature dish. The Jones sisters have built a following on burnt ends over three decades and multiple restaurants.

The burnt ends at Jones Bar-B-Q are one of the seven items available from the vending machine. Alongside chicken wings, turkey, and rib tips, they’re stocked between 5 and 10 a.m. as they come off a smoker sitting next to a big pile of hickory wood. Jones labels each clamshell package with a hand-written description on masking tape. The sandwiches come with a small cup of sauce and sweet barbecue beans, potato salad, or coleslaw. Stacked high inside a soft white bun, the smoky, charred burnt ends are tender, moist, and taste like meat candy.

“You’ve got to try everything once in your life,” Jones says.

Once an abandoned meatpaking plant, this Chicago site is now an artisanal food hub.
food

The second iteration is filled with rare and unexpected treats from the American South.
Sponsored by Partners of Travel South
roads

One way to make sense of the senseless slaughter of roadkill? Salvage it for food.
Video • Gastro Obscura

Why settle for barbecue chips when you can get actual barbecue?
Condom, France