Where the Heroes of Your Favorite Fairy Tales Live - Atlas Obscura
Want to see fewer ads? Become a Member. 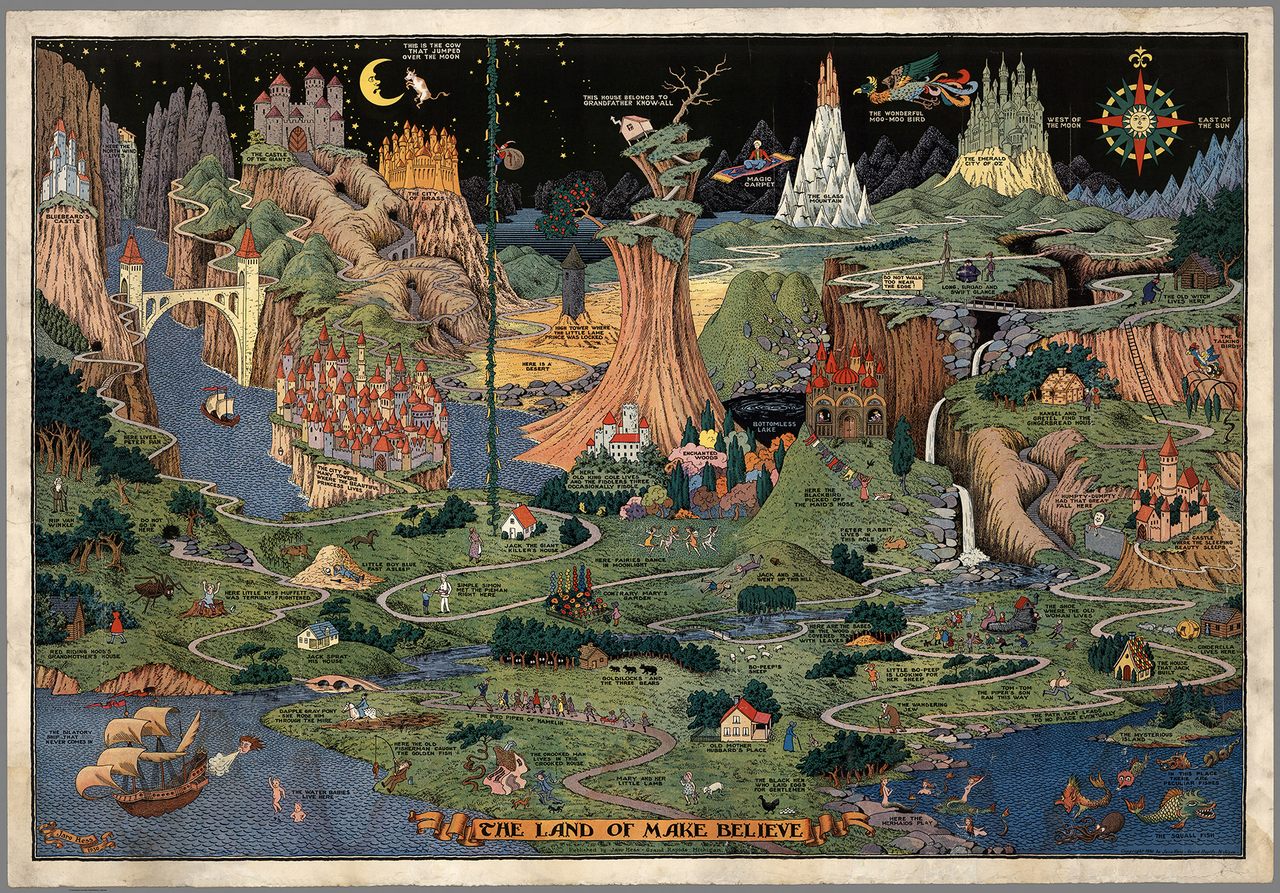 The Land of Make Believe by Jaro Hess. (All photos courtesy of David Rumsey Map Collection)

Fairy tales and nursery rhymes are some of the most world’s powerful stories. They have survived through the ages, retold and repurposed, but always leaving an impression in the memories of our childhood.

In this 1930 map titled The Land of Make Believe, Jaro Hess brings to life some of the most beloved nursery rhymes and fairy tales to have populated children’s imaginations. Here, all the fantastic characters whose lives and misfortunes so entertain us live in one world, all together. Much like they do in our minds.

We see Jack the Giant Killer climb up the beanstalk to the Castle of the Giants, as the cow that jumped over the moon makes its leap. Little boy blue sleeps soundly, unaware of the giant spider that frightens Little Miss Muffet. Old Mother Hubbard waits to see what incredible trick her dog will do as they stand right next to Mary and her little lamb.

Interestingly enough, we catch some of the characters in the middle of their adventure: Tom Tom the piper’s son is running away with the pig, the three bears are about to enter the house where Goldilocks sleeps, and Hanzel and Gretel have just found the gingerbread house.

Others, like Humpty Dumpty, have not yet met their tragic fates. And still others are off the page, presumably having adventures outside of the map, or hidden somewhere within it. Peter Pan, for example, is nowhere to be seen, but we know he’s part of the world because Hess is kind enough to have indicated the forest where he lives. The same goes for sleeping beauty and Bluebeard, though given the tragic end of all of the latter’s unfortunate wives, this is actually a relief.

There are also general characters without which the map would not be complete. What would the Land of Make Believe be without mermaids who splash water around, strange fish that threatened ships, and fairies dancing in the forest?

Besides characters, we see fictional places that have often been the object of our fantasies. The Emerald City, for example, sparkles in the Northwest, and the City of Brass leaves the pages of Arabian Nights to adorn the skyline of the Land of Make Believe.

Born in Prague in 1889, Jaro Hess was a man of many interests. Throughout his adult life he worked in such diverse fields as horticulture, engineering, chemistry, steel work, parapsychology, and painting. Migrating to the United States when he was 21 years old, he lived through the Great Depression and, inexplicably, settled down permanently in Michigan.

His background is evident in the map. Tales from all over Europe, even those not well known to the Anglophone world, appear. The Glass Mountain, for instance, is a Polish fairy tale about a princess who -of course- is locked away in a tower. Grandfather Know-All, comes from Slovakia. Likewise, the Old fisher who catches the golden fish is a tale by the Russian writer Alexandre Pushkin.

The map is also indicative of the year it was drawn. The 1930s were the years of the Great Depression in North America. What better way to illustrate the juxtaposition of dreams and tragedy than with fairy tales and nursery rhymes?

Like many children’s stories that describe horrible events in light mannered ways, so the map splashes some hints of tragedy throughout it seeming cheerfulness. We stand powerless as the blackbird swoops down to pick off the maid’s nose, see Jack and Jill falling down the hill, and find the tomb of the babes who died in the woods and were covered with leaves by sparrows.

What’s strange about these scenes is that, to the unknowing eye, they seem almost joyous. Someone who doesn’t know the story of the Pied Piper would think that he’s leading the children to a party rather than to their deaths. Likewise, the old woman who lives in a shoe surrounded by her many children could be a beautiful domestic scene. On closer inspection, however, we see in her hand what could be the rod that she uses to beat them.

Perhaps the most powerful symbolism, however, is the long and winding road that circles around the map. Though it gives the impression of leading to a thousand different places, if we follow it, we can see that Hess is right when he describes it as “the path that leads to no place eventually.”

Like the world in which Jaro Hess lived, the Land of Make Believe is full of traps and dangers. Strangely, that just makes it more endearing.

To get a copy of this wonderful map, head to Rosen-Ducat imaging.

Watch These Microscopic Organisms Feast on a Dead Worm