Why Are There Palm Trees in Los Angeles? - Atlas Obscura
Want to see fewer ads? Become a Member. 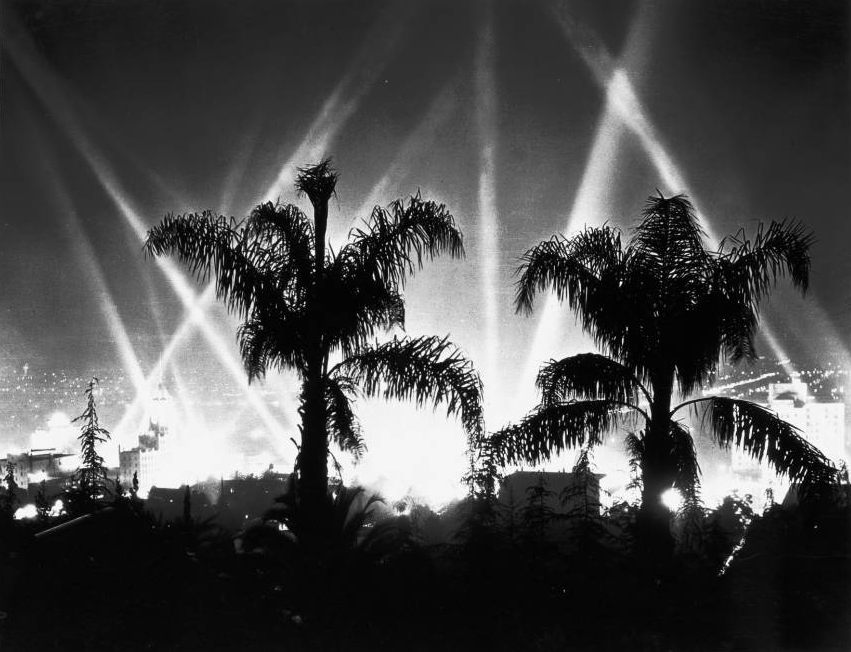 Hollywood by night, 1930. USC Libraries/California Historical Society/CC BY 3.0
In This Story
Destination Guide

Let’s go back in time, to Los Angeles in 1875. Here’s what you see: basically nothing. The town—and “town” is even sort of grand for what it was—has about 8,000 people in it. But here’s something weirder: there are no palm trees. As a matter of fact, there aren’t really any trees at all. This area is just sort of a scrubland desert.

Over the next 50 years, palm trees would become a major transformative force in the development of Los Angeles. This is despite the fact that they don’t really do anything. The trees of urban Los Angeles do not provide shade or fruit or wood. They are lousy at preventing erosion. What they do, and what they did, is stranger: they became symbols.

There is a single species of palm native to the entire state of California, the California fan palm, which is a big one with what looks like a fuzzy beard of brown leaves underneath its green fronds. It’s naturally found around desert oases in the Colorado Desert. (The Colorado Desert is not in Colorado, but is named for the river. Joshua Tree National Park is there.) The native people of that area, the Cahuilla, used it pretty liberally; palm fronds are incredibly strong and heavy, which makes them good for building. But compared with the East Coast palms—there are 12 species native to Florida—the West Coast was, until very recently, basically barren of these trees. Plants. Tall grass things. Wait, what are palms, exactly?

One first weird thing in a very long list of weird things about palms is that they are not really trees. The word “tree” is not a horticultural term—it’s sort of like “vegetable,” in that you can kind of call anything a vegetable—but palms are not at all like the other plants commonly referred to as trees. They don’t have wood, for one thing; the interior of a palm is made up of basically thousands of fibrous straws, which gives them the tensile strength to bend with hard tropical windstorms without snapping. They are monocots, which is a category of plant in which the seed contains only one embryonic leaf; as monocots, they have more in common with grasses like corn and bamboo than they do with an oak or pine tree.

Southern California might not have been rich with trees, but it was rich with money and rich with sunshine. Once the railroads came to Los Angeles, in the 1880s, speculators realized this huge empty sunny place would be a great opportunity to sell land. But how to get people to move way out to the desert? One way was incredibly cheap train tickets; the railroads sold tickets from the Midwest for as little as one dollar. But, as with California ever since, the place had to be marketed.

There are only two palm species native to Europe; one is a little shrub, and the other is restricted to a few Mediterranean islands. Because they were not common, palms have for centuries had a strange pull for people who didn’t grow up around them. “In the Western imagination, palms for a very very long time were associated with that part of the world that, depending on your point of view and your time in history could be called the Orient, or the Far East, or the Middle East, or the Levant, or the Holy Land, or the Ottoman world, or the Turkish world,” says Jared Farmer, the author of the definitive book on California foliage, Trees in Paradise.

Palms grow freely in the Middle East, and this part of the world always had major religious associations for Westerners, most of whom, for a long time, followed Christianity, Judaism, or Islam—all of which have their holiest sites there. Palms themselves are used in those religions: Jews use them during Sukkot for waving rituals, Christians during Palm Sunday often folded into crosses. The Prophet Mohammed talks about date palms a lot, even if the plant doesn’t have as prominent a role in the rituals of Islam.

The original reason that palms were planted in the New World was for use during Palm Sunday; Catholic missionaries in Florida and California, finding themselves in a place with a hospitable climate for palms, planted them around their missions. But the missionaries are not responsible for the mass of palms in Los Angeles.

Up until the mid- to late-19th century, the French Riviera was sparsely populated. But popular writers began traveling there, and found it was pretty nice. That, coupled with a trendy new health fad in which time in a dry warm climate is supposed to have good effects on the body, increased its popularity. Immediately developers moved there and began building it up. Palms, already a symbol of warmth from the Middle East, were ideal for this kind of rapid development.

Remember how palms aren’t like other trees? One way is that they’re outrageously easy to move around: they don’t have elaborate root systems like oak trees, but instead a dense yet small root ball. This can be pretty easily dug up and transported, then planted, and palms are not particular about where they are, as long as they have sun and water. To make things easier for developers, palms, being more like grasses than trees, don’t demonstrate all that much difference between individuals; one Mexican fan palm is pretty much like the next. And if you’re a developer, consistency and ease of transportation is a fantastic combination: you can line the streets with them, or plant one on each side of an entrance! And it’s cheap and easy and looks festive. Plus, it has this preexisting association in the minds of your customers (who, in the case of the early French Riviera, were mostly British) with warmth and exoticism.

Palms, though they weren’t native to the Riviera, became indelibly associated with it. And the American developers eyeing Southern California got some ideas. Hey, they thought. This big chunk of desert-y scrubland we own is not that dissimilar from the Mediterranean sites of the Riviera. What if we took a page from their book, and started branding Los Angeles?

Los Angeles, for what it’s worth, wasn’t the only place to try copying the French Riviera. The British tried it too, in a place called Torbay, although even in the far south of England it’s just not warm enough for palms to really thrive. They did their best, though, with a palm called the New Zealand cabbage palm, planted all over the area. It’s basically a shrub.

Anyway, palms took off as a symbol of wealth, luxury, nice weather, vacation. The ease of growing them in containers meant that palms were found on luxury ships like the Titanic and Lusitania. Robber barons, fancy hotels, and magnates in San Francisco—a much older city than Los Angeles—planted them in “palm courts,” a sort of atrium/ballroom featuring lots of palms and probably a string quartet.

“What LA adds to that, which no city, no people had ever thought to do before, and maybe for good reason, is to plant palms systematically as street trees,” says Farmer. The young city, wanting to attract people to a world of sunshine and cars, planted tens of thousands of palm trees. And they weren’t just on big boulevards: Los Angeles planted them everywhere. Tiny residential streets, parks, anywhere. Places designed for tourists—boardwalks, beaches, wealthy hills, even sports arenas like Staples Center, where the Lakers and Clippers basketball teams play—were especially tended to. And they made sure the palms were watered.

Palm trees weren’t the only non-natives that the early planners of Los Angeles planted. They also planted lots of citrus trees, pepper trees, and eucalyptus, all of which were supposed to evoke this Mediterranean feel. But it was the palms that really took off.

This experiment yielded some very strange results. The palms thrived in Los Angeles—Farmer described seeing them growing in cracks in the asphalt in abandoned lots—and one species in particular, the Mexican fan palm, grew enormous. The Mexican fan palm is native to Northern Mexico; it’s that incredibly tall skinny one with the little fronds high up above. “Nobody knew they would grow so tall; they grow taller in LA than they would in the wild. They’re the tallest palms in the history of the world, at least that we know of,” says Farmer.

They are, in fact, taller than most buildings in Los Angeles. The city has always been a sprawling, low-slung city, with few buildings over two stories tall. It spread horizontally rather than vertically, partially due to the cheap abundant land and partially because Los Angeles was always an automotive city. Unlike in other cities, the great skyscrapers of Los Angeles are not huge buildings: they’re trees.

Once the palms were firmly ensconced in Los Angeles, the movie and TV industry popularized them. The palms, despite not being native to LA and in fact only having recently arrived there, became the most iconic image of the city. Every awards show, every red carpet, every movie and show shot in Southern California included palm trees. The city expanded like crazy; the population went from 11,000 in 1880 to over 1.2 million only 50 years later.

Urban trees do actually have jobs, besides just looking nice: they provide shade, reduce heat, clean the air, some prevent erosion, and some produce an edible or useful material. Palms in Los Angeles do not do any of this. Their job was not to be good urban trees; it was to create an image of a new kind of city and convince people from elsewhere to come to Los Angeles. They succeeded at that! But with the first batch of trees now dying out due to old age and an array of pests and diseases, Los Angeles is making some changes. Replacement palms are more likely to be more drought-tolerant and provide more shade, like the Chilean palm. But, says Farmer, Los Angeles is not likely to ever let palms completely vanish.

His name was Barry Gfeller, and he left behind an astonishing 50,000 previously unseen images.
treesplants

Environmentalists see small reforestation pilot sites around the capital of Amman as a first step to a greener future.
nature

1:32
Want to see fewer ads? Become a Member.
From Around the Web
Atlas Obscura Trips
Los Angeles: America’s Culinary Frontier
View This Trip
Thanks for sharing!