Antarctica's Pretty Pink Snow Is Brought to You By Algae and Penguin Poop - Atlas Obscura
Want to see fewer ads? Become a Member. 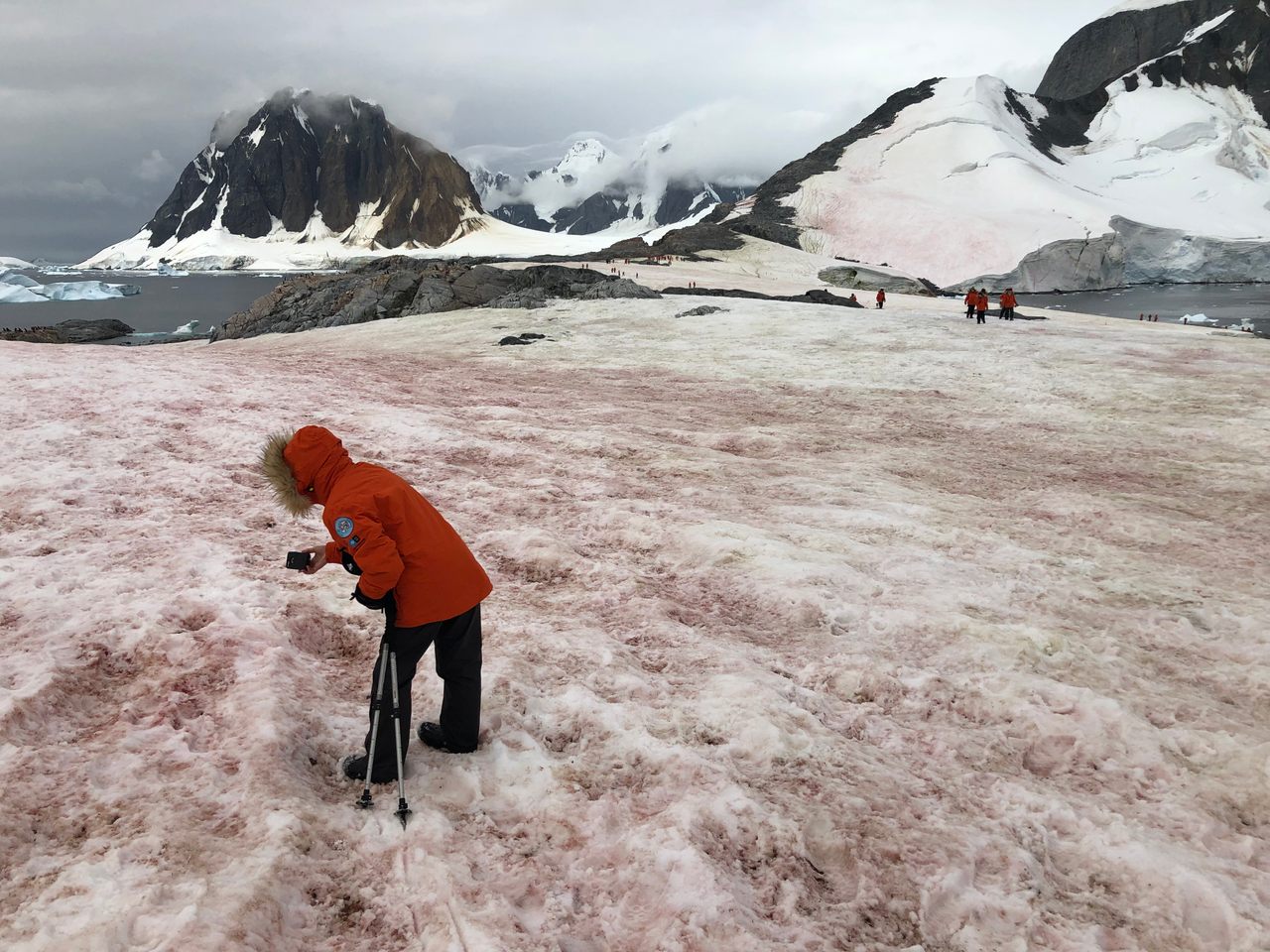 Antarctica is sometimes called the great white continent—but it’s not uncommon for expanses of snow to look reddish-pink, as though a giant has spilled some Kool-Aid, or, less charmingly, a terrible bloodbath has recently taken place. The phenomenon is neither whimsical nor gruesome: It’s caused by teeming communities of algae.

The algae known as Chlamydomonas nivalis gives the landscape its unusual hue. The phenomenon is also known as “watermelon snow.” At some points in the year, the algae makes the snow appear green; at other times, sherbet pink or berry red. “Snow algae have an interesting life cycle, with the ability to modify their pigmentation in order to adapt to changing seasons and environmental conditions,” says Alia Khan, an assistant professor in environmental sciences at Western Washington University. The algae is green during its reproductive stage, and then looks pink or red when it’s dormant.

It’s a seasonal shift, adds Ted Scambos, a polar scientist at the University of Colorado Boulder who has made 20 visits to Antarctica. Red algae is a sign of “autumn colors in Antarctica,” Scambos says, in the same way that ochre or mustard-colored leaves mark the fall in deciduous forests. It turns red, he says, as it “hunkers down, so to speak, for the winter.” (Autumn is just arriving in Antarctica, and the continent will soon stare down a long, cold winter.)

In both phases—red and green—the algae will absorb solar radiation, says Khan. That lowers the reflectivity of the snow, causing a bit of melt and helping the algae to access more liquid water, which it needs to survive. During the red portion of its life, the algae contains much more of a pigment called astaxanthin than chlorophyll, the pigment that makes many plants green.

The other key ingredient is pooping critters. On its own, snow doesn’t necessarily possess much in the way of nutrients—but when penguins poop, they set the stage for other life. “One animal’s waste is another animal’s banquet,” says Scambos. When it comes to the poop, “a little goes a long way,” he adds. “Dust from dry poop is enough to fertilize a snow bank so algae can colonize it.”

The red wash is a common yearly sight, but the scale varies. “Every year, you might get some right by the coastal area, where the waves are lapping up, but this year it bloomed over a much wider region,” Scambos says. Antarctica recently logged its hottest day on record, according to NASA’s Earth Observatory—on February 6, the northern tip of the continent was roughly the same temperature as Los Angeles, California—and it’s been a big season for the algae. Scambos spotted it all along the western coast of the Antarctic Peninsula in early February, while lecturing on a cruise ship sailing from Argentina.

Though some earlier research suggested that the algae might only thrive in very cold conditions, a team from the University of Innsbruck and the University of Salzburg, in Austria, studying alpine snow algae in the Austrian Alps, found that it could hang in there when temperatures warmed. Writing in the the European Journal of Phycology in 2005, they reported that C. nivalis could still produce oxygen (at least for a short time) when the temperature rose to 68 degrees Fahrenheit.

As Antarctica warms, Scambos suspects that “watermelon snow” will become more widespread at higher elevations and farther from the coast.

This should probably go without saying, but: If you do get up close to it, don’t be tempted by its resemblance to sorbet. “It would not be wise to consume any of this algae,” Scambos says. Not only is it mildly toxic to humans, he says, you can also rest assured that it’s fueled by something foul: “It’s an indication that there are other things in the snow that you wouldn’t want to consume,” Scambos says. (He means poop.)

Astrophysicist Robert Schwarz has spent more winters at the southern tip of the world than any human in history.
plants

In Antarctica, It's Not Easy Being Green

Yet vegetation persists there. And as the first large-scale algae map reveals, "green snow" acts as a carbon sink.
science

And why is it fouling the coast around Istanbul?
objects of intrigue