What in the World Is Sea Snot? - Atlas Obscura
Want to see fewer ads? Become a Member. 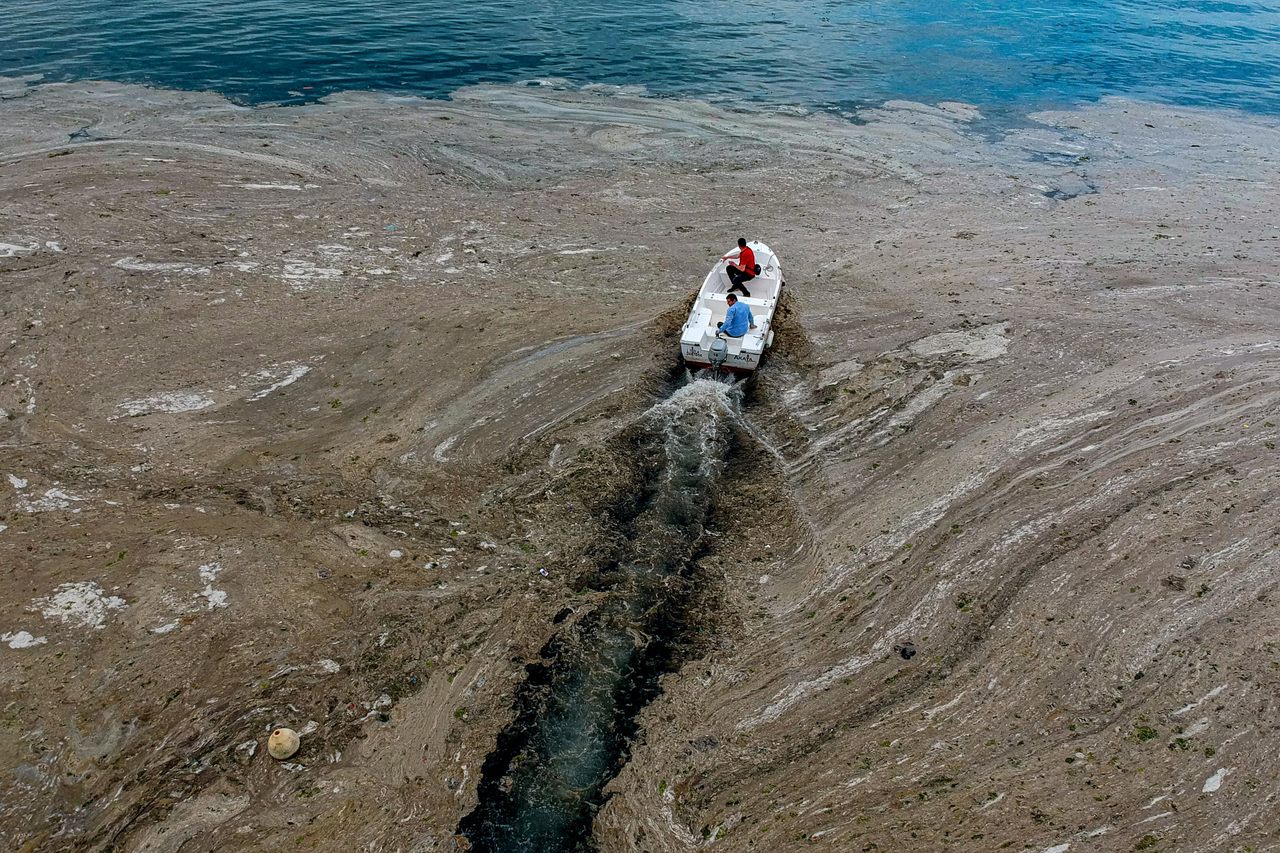 By the beginning of June, sea snot was thick off the coast of Turkey. YASIN AKGUL/AFP via Getty Images
In This Story
Destination Guide

For months the waters around Istanbul, Turkey, have been coated with a gloopy film. Sometimes creamy, sometimes khaki, it can appear slightly dreamy or superlatively gross, depending on the vantage. From overhead, it’s almost romantic, like clouds glimpsed from space, white squiggles marbling Earth’s blue. Up close, the stuff is much more phlegmy. The shore-hugging substance is sometimes known as “sea snot,” and it’s easy to see why. It looks like the marine equivalent of a big, wet sneeze.

Sea snot is more scientifically known as “marine mucilage,” and it’s an ecosystem of its own. In a 2009 paper in the journal PLOS One, a team of scientists led by Roberto Danovaro, a marine biologist at Italy’s Polytechnic University of Marche, described it as a “gelatinous” stage of marine snow, the jumble of organic material—such as feces and fragments of dead plants and animals—that drifts from the surface to the ocean floor.

The snot is produced by a bunch of microorganisms, one Turkish research team explained in a UNESCO bulletin called Harmful Algae News, especially microalgae known as diatoms. These petite algae are known to exude polysaccharides, sugary carbohydrates that can get quite sticky. Sampling sea snot that clotted several locations in the Sea of Marmara in 2007 and 2008, the researchers also identified species of dinoflagellates and more.

Like the mucus launched from human nostrils, sea snot can smell foul, and slimes whatever it touches. And in addition to discouraging swimmers and deterring fishing, the gunk can be a nuisance for corals, scientists have found. From December 2020 to early March 2021, H. Barış Özalp, a marine biologist at Turkey’s Çanakkale Onsekiz Mart University, measured the effects of sea snot on reefs in the Çanakkale Strait. Özalp found that some of the creatures were dripping with the stuff. It looked as though they had been blasted with ectoplasm, or wrapped in a spider’s web, and the substance seemed to be killing some of the branches. A thick coating can deprive the corals of oxygen, and other research teams have worked to suss out sea snot’s effect on mussels, crabs, and other sediment-dwellers. Danovaro’s team found that the sticky matrix can also entrap viruses, and potentially ferry them around marine ecosystems.

Sea snot has coated portions of the Mediterranean several times in recent years. In March 2007, Danovaro’s team reported, it fouled more than 1,550 miles of Italy’s coastline, and clusters stuck around for five months. Researchers suspect it’s urged on by several factors, though the precise mechanisms of what causes a snot bloom are somewhat mysterious. “We actually know very little about the interactions between chemistry, biology, and physics that lead to these extreme events,” writes Uta Passow, an oceanographer at Canada’s Memorial University who studies marine snow, in an email.

These substances are always in the water, Passow adds—but when they go from discrete and microscopic to massive clumps easily visible to the naked eye, something is out of whack. Passow says that warming and an influx of nutrients could both nudge a system off balance if the “right” organisms thrive and weather conditions don’t break up and dilute the aquatic boogers. Danovaro’s team found that some nasty cases—the snot that sprawled the most and hung on the longest—coincided with higher-than-average water temperatures. “In light of the warming trend of the Mediterranean Sea, the mucilage phenomenon could increase in the future,” the team wrote.

As for the sea snot currently choking the Sea of Marmara: Reuters reported that Turkish environment minister Murat Kurum and other officials are examining whether pollution and sewage are contributing, and will hatch a plan in June 2021. Extreme snot events are “a ‘call for help’ from the system,” Passow says. And while marine creatures and nearby landlubbers wait for a hand, the water could use a tissue—a really, really absorbent one.

Lauded for her research on gentle giants of the sea, Andrea Marshall is using her fame to find hope for our troubled oceans.
Video • PinDrop