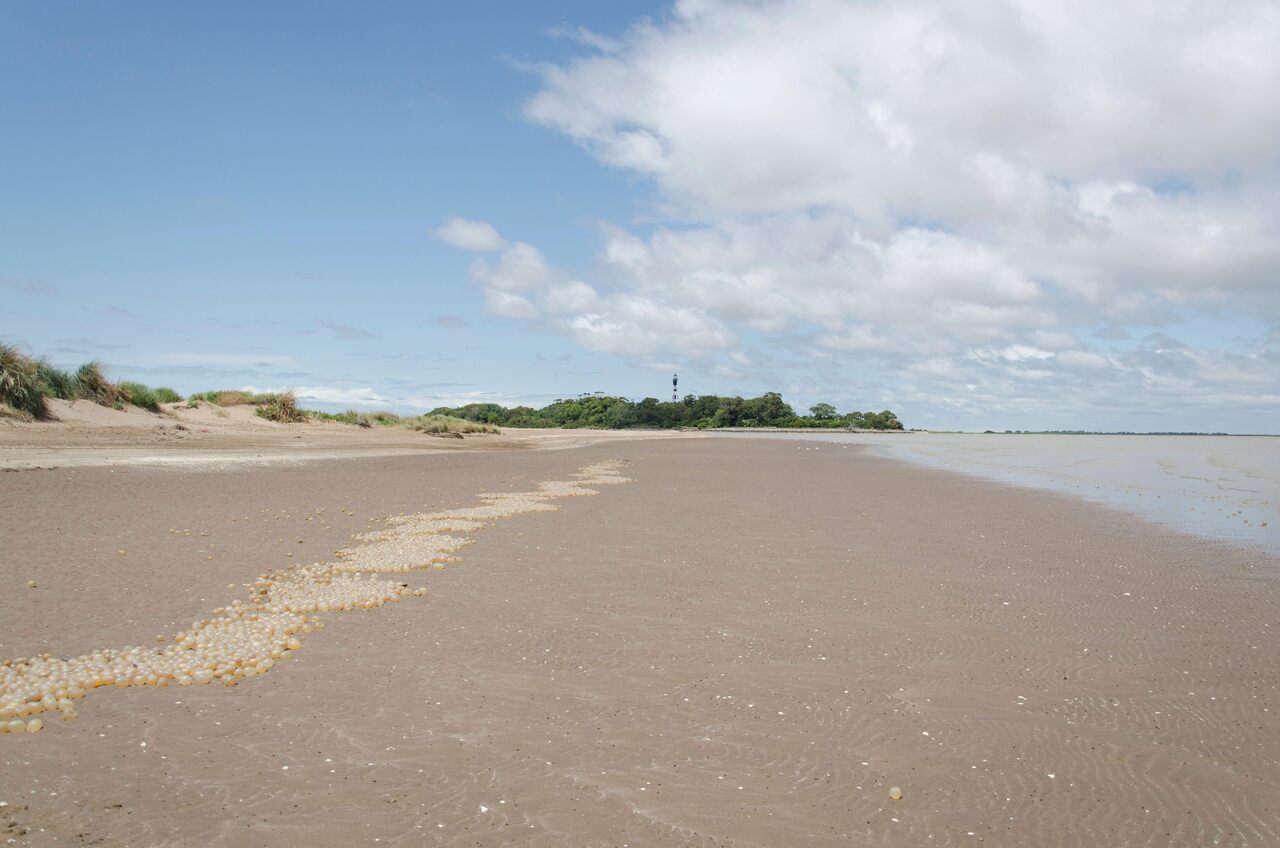 If it’s lucky, Adelomelon brasiliana spends its life in coastal waters of Brazil, Uruguay, and Argentina, half-swallowed by sand. There, the snail, whose tawny or ashen shell measures more than seven inches long, mates and eats. Scientists don’t know a ton about its diet, but its brethren—other gastropods in the family Volutidae—are carnivorous. What’s certain is that during breeding season, pearly orbs drift through its neighborhood. Unlike species that deposit their eggs somewhere sturdy, like on a rock, A. brasiliana sets its egg capsules free. The milky or translucent spheres, about the size of a tennis ball, float through the water close to shore, little potential lives suspended in a big ocean.

If the snails are unlucky, though, the capsules don’t stay there. Fierce waves, particularly ones that might accompany storms, can fling the eggs up onto the sand. Hundreds or thousands can collect in bands along the shore, creating the impression of big strands of pearls or beads marking the high-water line.

For humans, it’s a strange, beautiful spectacle. When scores of these capsules lined the beach of Argentina’s Mar del Plata recently, onlookers stopped to photograph them. Some even hopped over the mounds of soft-but-sturdy orbs, as if they were playing in a snowbank. But when the ocean spits out the eggs, it can spell doom for the creatures growing inside. Writing in the journal Malacologia, marine researcher Diego Luzzatto notes that storms can permanently strand the capsules, leading to “mass mortality.”

That’s partly because for some shorebirds, the eggs are an irresistible feast. A trio of scientists writing in the Journal of Shellfish Research reported that, when the egg sacs are available, a few avian species opt for the capsules over their usual fare. So instead of smashing bivalves, the birds known as American oystercatchers scoop the little capsules into their orangey-red bills. The black-necked stilt, which teeters into shallow waters on legs like pink plastic straws, gives up its typical diet of invertebrates when the eggs are on offer. A single capsule can contain well over a dozen embryos, each maybe half an inch long. To birds, the beach becomes a heaping buffet.

And when wild storms catapult the capsules so high up on the sand that they’re out of reach of the waves, there’s basically no chance of them returning to the water, says Pablo Penchaszadeh, a researcher at Argentina’s Bernardino Rivadavia Museum of Natural Science, who has studied the snails for decades. In all, “maybe two, three, or five percent of the stock make it back to the sea,” he says. Those that don’t die by beak wind up desiccating in the sun. “It smells very bad,” Penchaszadeh adds. “They’re rotting.”

While mass die-offs are unfortunate for the casualties, they aren’t a threat to the survival of the species. The free-floating eggs give the snails an advantage in terms of geographic distribution, Penchaszadeh says. And A. brasiliana has been at it for a while. “They’re very well adapted to have that mortality,” he adds. The embryos that survive are resilient as soon as they emerge, and that helps, too—they’re simply smaller versions of full-fledged adults.

The marooned capsules are startling and pretty, one of several minor mysteries that the ocean sometimes delivers to land. But the biological baubles are also a reminder of how quickly tides can turn for young, vulnerable shoreline creatures. “That’s sad for me,” Penchaszadeh says. “But life is life. Life will continue.”

Cook Your Way Through Regional Indian Recipes With This Online Archive

Studying the animal’s nerve network may help scientists understand our own.
science

And why is it fouling the coast around Istanbul?
Video • AO Docs

3:38
Want to see fewer ads? Become a Member.
From Around the Web
Atlas Obscura Trips
Mountains, Lakes & Wilderness in Untamed Northern Patagonia
View This Trip
Thanks for sharing!