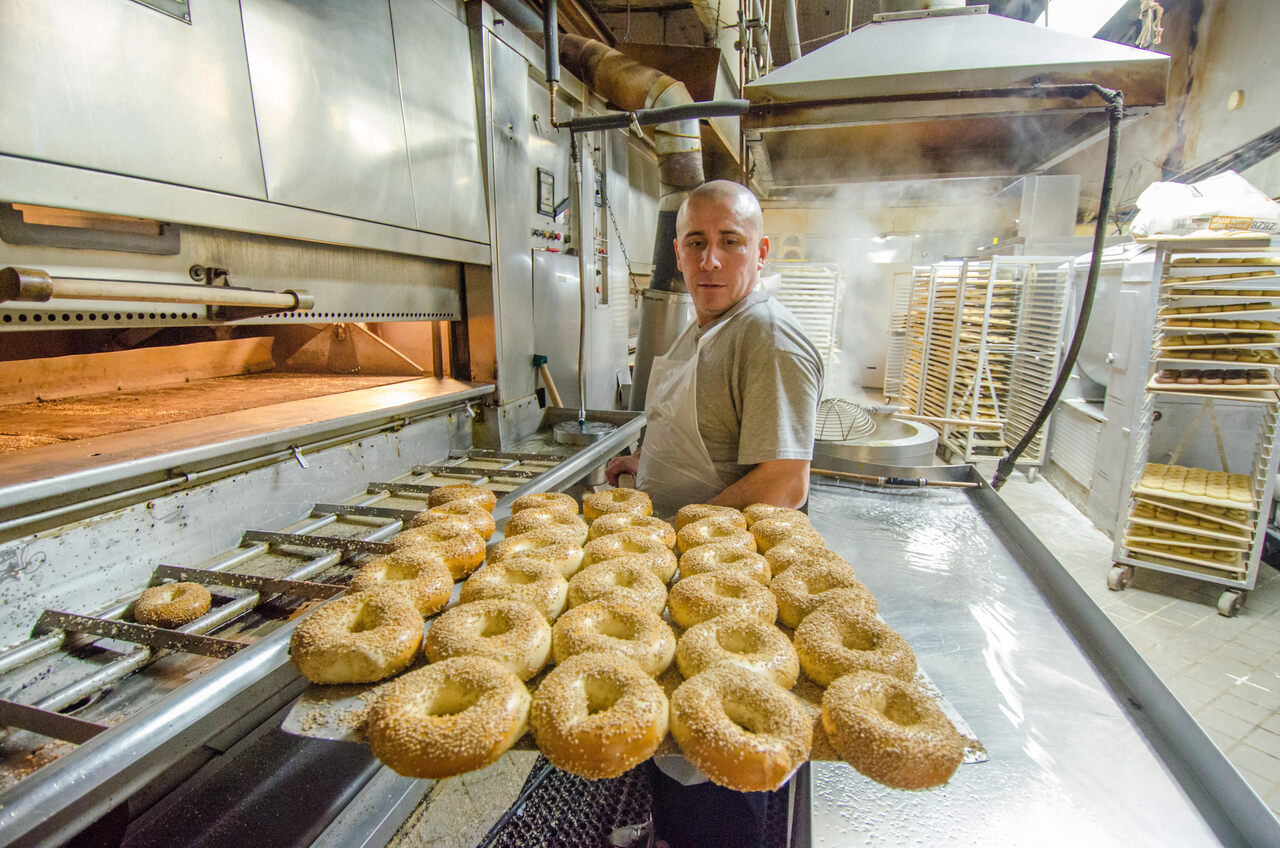 A fresh batch of sesame bagels are removed from the oven at H&H Bagels in New York. Chase Guttman / Alamy
In This Story
Destination Guide

Pasquale Fuentes arrives at Shelsky’s Brooklyn Bagels around 4 p.m. and gets to work making dough, cutting it into slabs, and rolling it into ropes. On most days, he heads home around nine, but some nights he’ll spend another few hours rolling bagels in another shop. “There aren’t a lot of bagel rollers with experience,” says Fuentes of the many calls he receives from bagel-shop owners. If it weren’t for folks like him, New Yorkers would have to start their mornings with soft, machine-made bagels rather than the taut, chewy, hand-rolled bagels the city is famous for.

Bagel rolling has been passed down by generations of immigrants since bagels first arrived in New York in the late 1800s. To this day, despite decades of advancement in bagel-making automation, shops devoted to proper New York bagels rely on their labor and skills.

The importance, and labor power, of these workers dates back to the Jewish immigrants who established the legendary Bagel Bakers Local 338 Union in the 1930s. As the demand for bagels rose across New York and New Jersey, a group of 300 or so bagelmakers banded together and reigned supreme in the bagel market for decades, ensuring its members better wages and working conditions while making great bagels. If and when employers didn’t meet their demands, union members went on strike, inflicting “bagel famines” on the city until shop owners buckled. In the late 1960s, however, their bargaining power deteriorated with the advent of bagel-making machines and mass-produced bagels.

Still, New Yorkers’ appetite for hand-rolled bagels did not disappear, so neither did the need for skilled bagel rollers. Peter Shelsky, who has been in the bagel business since opening his shop in 2011, has considered investing in a machine. It would be reliable and cut labor costs, he says, but human hands still make better bagels.

“The problem with the machines is their bagels are too perfect. They all look the same. So everything winds up looking like a Krispy Kreme donut, this perfectly round thing,” he says. Machines also need soft dough. “So you get a softer bagel, which is not what you want, you want a firm bagel.” The bagels prized by New Yorkers, with their puffy insides and shiny exteriors, are still best crafted by hand.

Jewish immigrants continued to operate and staff independent bagel shops well into the 2000s, but the dissolution of Local 338 opened up the bagel-making labor pool to non-Jewish workers. Like much of New York’s food-service workforce, many bagel rollers are Mexican. But many are of Thai descent. In How to Feed Friends and Influence People, Milton Parker, the late author and co-owner of Carnegie Deli, writes that the Thai government invited members of Local 338 to come to Thailand in the 1990s to train local residents. Government officials hoped to develop a local bagel industry; instead the newly minted bagel rollers immigrated to New York in search of work.

Due to their ability to work swiftly and efficiently, bagel rollers can earn a sizable salary by working for several shops at once. The fastest produce upwards of 500 bagels in an hour, hopping from store to store and handling as many as four yields daily. Fuentes, an immigrant from Mexico who has been rolling bagels since he learned from a Jewish-American boss 20 years ago, prefers the stability of working at one shop. But he understands why peers prefer otherwise.

“If you work fast, it’s better you get paid by the bag, but if you take your time, it makes sense to work by the hour,” he says. As a self-professed bagel lover, Fuentes values consistency. “I like to work fast, too, but I like to check for quality, because I can go to one place and do what I have to do, wipe my hands and go home, but when I don’t do a good job, the bagels are not going to be as good as they should be.”

Most bagelmakers prefer to work as freelancers, which makes it a constant hustle for shop owners to retain steady labor. As contractors, rollers can negotiate their rates, but the solitary work has its own appeal. “We had one [bagel roller] that was actually a monk in a silent monastery for years,” says Bari Musacchio, who owns Baz Bagels in Nolita. “He would just come in by himself and zone out. There’s something very zen about the repetition of the task.”

“They don’t want a boss breathing over them,” adds Shelsky. “They sort of just do their thing and move from place to place.”

Although there are specialized bagel shops across the country, this ingrained workforce of bagel rollers is unique to New York City. At El Bagel in Miami, for example, owner Matteson Koche has four full-time bagel rollers on staff, most of whom were trained in-house.

Until bagel-making machines can replicate the artistry of human hands, rollers will remain crucial to the fabric of New York life. “These guys are rolling thousands of bagels a day, and that unspoken craft is what makes New York bagels special,” says Musacchio. “It’s not the water. It’s the fact that we have guys who have been doing this, rolling these bagels, for their entire lives.”

In Cancale, the seasonal absence of men meant women ran the show.
food

The Forgotten Filipino American Activist Behind the Delano Grape Strike

The interactive tool allows readers to explore how queer social life has changed over time.
Video • Wonder From Home

This family-owned bakery is one of the last places in Brooklyn to sell the Nation of Islam–inspired bean pie.
New York, New York

More than 250 sakes are available in an izakaya hidden in the basement of a Midtown office building.
Want to see fewer ads? Become a Member.
From Around the Web
Related

Organizers are using mesmerizing video clips of harvests to advocate for better protections and pay.
Read more
Thanks for sharing!