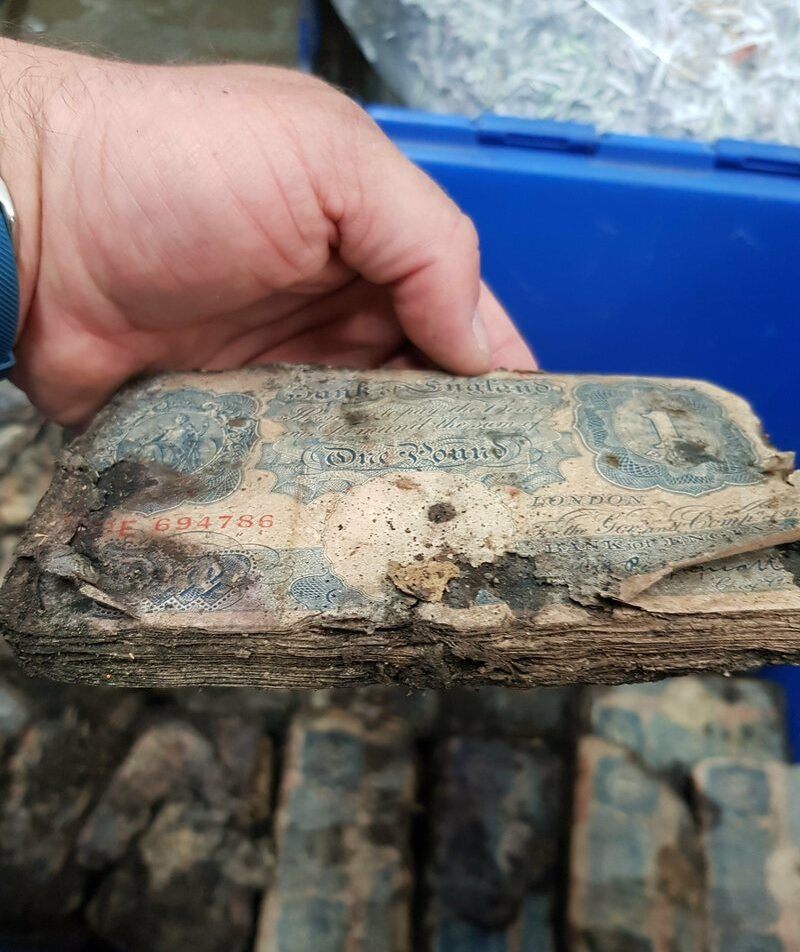 The bundle of World War II cash is valued at over $2 million dollars. Courtesy of Sussex Police

The Cotsworld Outdoor store in Brighton, England, stocks tents, sleeping bags, and an assortment of gear in its inventory, but last month, it acquired a rather unexpected item.

The store was in need of shape-up, so during renovation, shopfitter Russ Davis ripped up rotten carpeting, flooring, and tiles. As he pulled away the wilted floorboards, he stumbled on a thick stump coated in dirt and grime.

“I just thought it was a block of wood, so I snapped it in half and then found a £1 note. All the notes were stuck together, you couldn’t separate them, and they were caked in dirt. Some of them were really bad where you could see the metal water marks that run through the notes,” Davis told the BBC.

There were roughly 30 wads of £5 and £1 notes for a total of £130,000, or over $2 million in today’s U.S. dollars—enough to buy you a New York City two-bedroom condo (with maybe one roommate) or a 18,000-square-foot, six-bedroom home in Fargo, North Dakota. The distinct cerulean color of the notes indicated that these clumpy pieces of paper were currency issued by the Bank of England during World War II.

The store handed over the notes to the Sussex police, but the discovery left the store and Davis with more questions than answers. Davis speculated that the bills “could have come from a bank robbery, or been stashed during the war by someone who died,” but the truth might be contained within of the walls of the shop.

According to CNN, from 1936 to 1973, before Cotsworld Outdoor occupied its current space, the location was a Bradleys Gowns shop, which was a high-end fur and couture designer store with multiple outlets in and outside London. Notable figures like Clementine and Winston Churchill and the royal family frequented the shop for its customized tailor services.

It’s therefore likely, the last Bradleys Gowns heir Howard Bradley speculates, that someone left the money hidden during the war.

“We can trace our British family history back to the 1300s and we had Jewish roots as well. Obviously during the Second World War, during the ’30s, with what was happening in Germany, they would have been concerned,” Bradley told CNN.

Maybe his father Eric and uncle Victor, who both fought in the war, needed to keep some cash stored away, in case their family needed to flee from the Nazis.

For now, the police are holding onto the stack of bills. Cotsworld Outdoor won’t be able to cash in on their find, but they’ll have a great story to sell to customers.

The rust-encrusted device was likely abandoned at the end of World War II.
atom bombs

The particles have covered nearby beaches, unnoticed, for nearly 75 years.
abraham lincoln

For Sale: A Penny Worth a Fortune

In 1943, copper was supposed to be preserved for the war effort.
shipwrecks

Found: The Wreck of the Very First Ship Sunk in World War II

The Athenia was torpedoed the day England and Germany went to war.
Video • Object of Intrigue