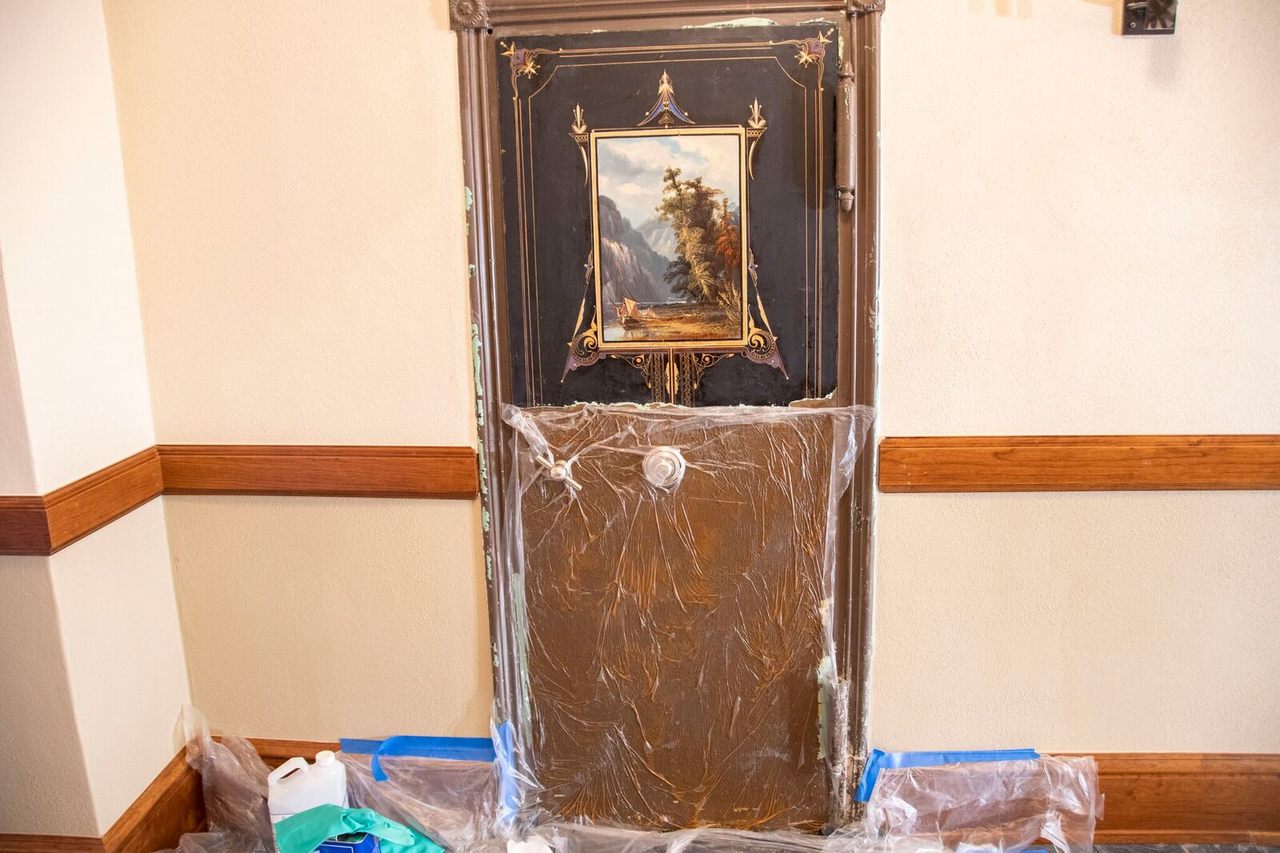 The paintings emerged from beneath layers of ho-hum brown. Courtesy Rachel Girt

The garden level of Wyoming’s State Capitol Building, in Cheyenne, is equipped with six heavy-duty vault doors. They were fabricated in the late 1880s (or very early 1890s) by the Mosler Safe & Lock Company of Cincinnati, Ohio—the same outfit that built the stronghold at Fort Knox.

A quick glance is enough to confirm a hefty lock and handle, but modern passersby would never notice that the imposing doors were also decorated with dreamy landscapes and intricate stenciling. It was all hidden under several coats of paint.

The scenes came into view back in May, when the restoration firm EverGreene Architectural Arts began work to return the doors to their original paint colors—part of a larger renovation effort at the Capitol. Until the team started peeling back the layers, “we had no idea that the paintings existed,” writes project spokesperson Rachel Girt in an email.

There are other Mosler doors on the building’s first floor, and those are solid black with a flash of gold pinstriping. The project team figured that the garden-level ones would be the same.

It took a day or two to work on each door. The crew members had a “very finicky” task on their hands, says Mike Carpenter, a project manager from EverGreene who worked on the restoration. They started with sandpaper and razor blades. Then, as the layers came off—first a lusterless brown, then a minty green—the team realized they were spying something sublime. “Once we started seeing the painting, we used less mechanical removal and more solvent,” says Carpenter.

The trick was finding a solvent that would eat off the paint but not the original layer. The restorers also had to contend with rust. A cocktail of paint thinners and other solvents later, they excavated vista after pastoral vista: sun-struck evergreens, cottony clouds, rushing streams, grand rock faces—all painted with oils.

The paintings are unsigned, and the team behind the Capitol project hasn’t unearthed much information about their creation, or whether they reference any specific vantage point. “We have no idea whether it’s a real scene or fantasy,” Carpenter says.

Tony Ross, chairman of the group overseeing the Capitol renovation, explained to the Casper Star Tribune that installing ornate safes may have been a way to boost the image of a place on the brink of statehood. (Wyoming entered the Union in 1890, becoming the 44th state.) Ross suspects that a stately, swanky building may have shown skeptics that “we’re not just rodeo and horses, we have sophistication.”

The freshened-up paintings—crisp as a mountain lake and sealed with fresh varnish—will remain in place on the vault doors and go on view to the public beginning July 10, 2019.

Glimpses of a master revising, changing, and editing.
paintings

Found: A Hidden Painting Underneath a Picasso

The Spanish master painted his 1902 masterpiece "The Crouching Woman" over a landscape composition.
nazis

From a Nazi code machine found at the bottom of a bay to a vintage Babe Ruth card hidden in a piano.
architecture

Found: An 18th-Century Garden Folly Adorned With Teeth and Bones

A bit disturbing, but oddly lovely.
Video • Object of Intrigue