The Enduring Mystery of the 'Fool's Cap Map of the World' - Atlas Obscura
Want to see fewer ads? Become a Member. 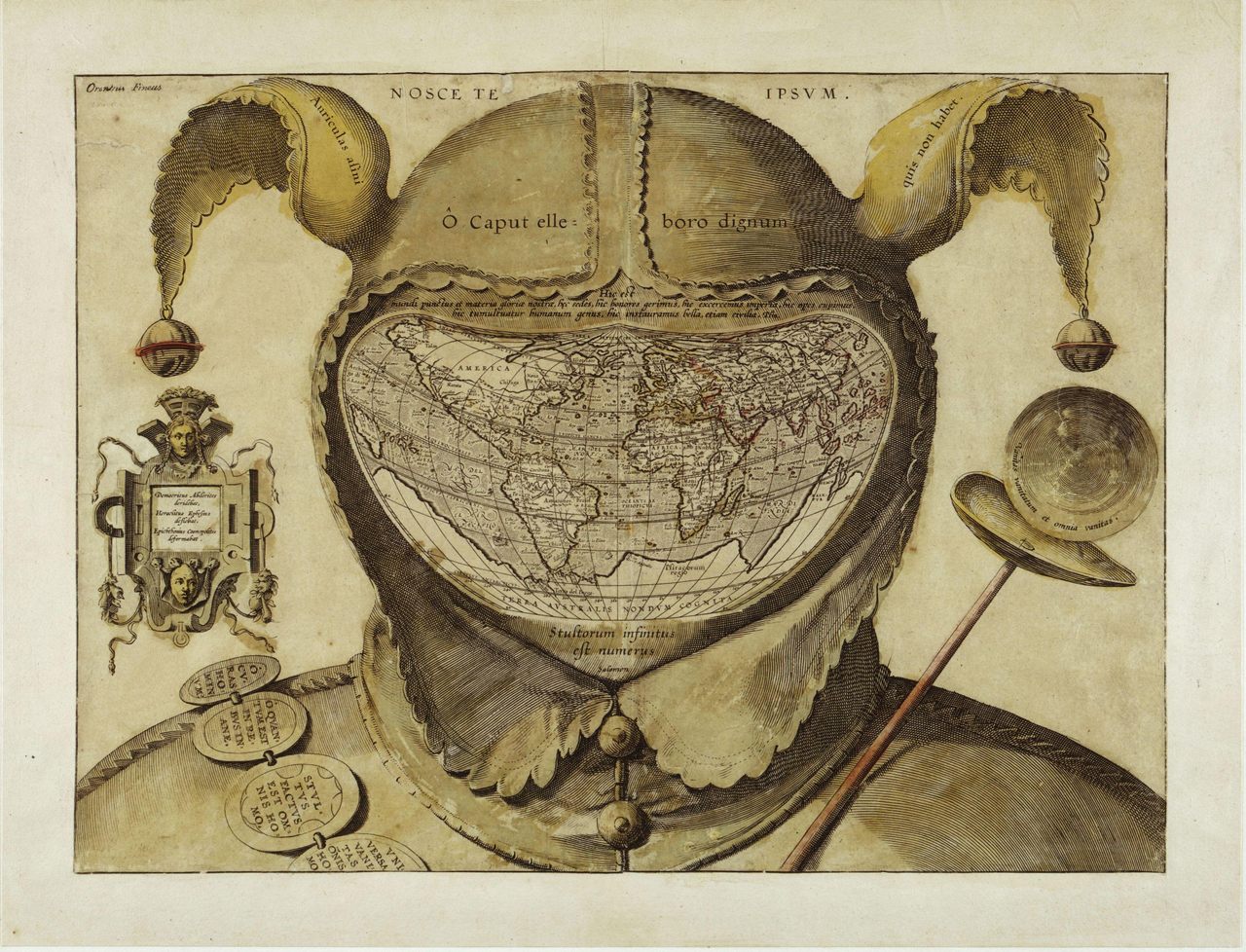 The symbol of the jester, or joker or fool, has inspired thrones, playing cards, and comedic fart acts. But there’s one particular image of the king’s fool that has remained a true mystery among cartographers and historians.

In the engraving above, colloquially referred to as the Fool’s Cap Map of the World, the intricate bust of a court jester—complete with bells and bauble—includes a face showing the world as it had been charted in the 16th century. Despite researchers making close examinations of the map, they can only speculate why, when, and by whom this peculiar map was made, explains the map journalist Frank Jacobs on his blog about strange maps.

The Fool’s Cap Map of the World “is one of the biggest mysteries in the history of western cartography,” Jacobs writes.

This is what we do know about the map: measuring about 14 inches by 19 inches and printed with a copper-plate engraving, researchers estimate that the map dates between 1580 and 1590. That’s because it matches the Ortelius oval map projections that had become common in the late 16th and early 17th centuries.

The Fool’s Cap Map of the World isn’t the first time the world has been visually mocked by a jester. In 1575, the French mapmaker Jean de Fourmont created his own foolscap map with a chart framed by the hood of a jester. While de Fourmont’s map is slightly smaller, and more oval in shape, the similarities are uncanny, writes Anne Chapple in Studies in English Literature. Academics believe that de Fourmont’s map most likely inspired the illustrator of the Fool’s Cap Map of the World.

The identity of the mapmaker is another unsolved mystery. In the left-hand corner, the name Orontius Fineus is inscribed, which is Latinized for Oronce Finé, a French mathematician and cartographer. Some claim Finé to be the illustrator, but he died at the age of 50 in 1555, before the map has been estimated to be published. Jacobs suggests that his name appears because he could have been the map’s subject of ridicule. In 1524, Finé was jailed for practicing judiciary astrology, in which people would reason, make predictions, and even base medical decisions off of star charts and arrangements. Finé’s role in the map’s creation remains a subject of speculation.

Many scholars believe that the mapmaker was Epicthonius Cosmopolites, whose name is mentioned in the left-hand cartouche: “Democritus laughed at it, Heraclitus wept over it and Epicthonius Cosmopolites portrayed it.” Still, very little concrete background information has been found. The Fool’s Cap Map of the World has created an array of deep, and dark, interpretations the world.

Traditionally, the fool was one of the only people who could freely criticize the monarchy. Some academics have thus interpreted that the map was created as a commentary on the inaccuracy of depictions and charts of the world in an age where much of it had yet to be thoroughly documented and discovered. Maps of this era were even known to be altered visually to support certain political ends.

“One way of reading the image would suggest that all seemingly universal truths, all apparently trustworthy knowledge or authoritative maps, are partial and untrustworthy in that they conceal a hidden social ordering,” writes David Turnbull in the book Masons, Tricksters and Cartographers.

Others see a more melancholy outlook on the world. The Latin phrases inscribed on the jester’s cap, staff, and shoulder belt lament the vanity of the world and the foolishness of those who love it, writes Chapple. On the staff is the phrase “vanity of vanities, all is vanity,” and one of the medallions of the shoulder belt says “oh, the worries of the world.” The quote on the bottom of the map, from Ecclesiastes, sums up the message of the map: “The number of fools is infinite.”

“The world is, quite literally, a foolish place,” writes Jacobs. “The uncomfortable truth told by this map is that the world is a somber, irrational and dangerous place, and that life on it is nasty, brutish and short.”

'Poisonous Parsnips' Are Washing Up on Beaches in Scotland

A groundbreaking female cartographer charted the evolution of the United States—and the dispossession of Native Americans.
emperor norton